As avid Neo Geo enthusiasts/collectors, we’ve been following this one for awhile, so it’s refreshing to finally see it launch. For many Neo Geo collectors, the home system (AES) presents a challenge: it’s incredibly expensive. Some games can reach nearly ten thousand dollars, putting the platform out of reach for all but the most Scrooge McDuck-esque collectors. As such, we’ve seen a rise in popularity of MVS cartridges throughout the years. Originally more expensive than AES cartridges, MVS cartridges can be had anywhere between $15-$200 for loose carts, making them desirable as they mirror the AES gaming experience completely.

As such, we’ve seen the rise of CMVS consoles, which are arcade PCBs modified to plug into a TV like a traditional console. Analogue made headlines last year for their wooden machine, while ArcadeWorks  launched a less-hyped CMVS, dubbed the “Omega,” that has garnered quite a few fans. As it mirrors the styling of the AES, many owners have had hopes of having similar-looking cartridges in their console.

Over the past several months, they’ve been working on a prototype for such a shell. Besides matching reasons, the project has other benefits. Many of the carts have tattered labels or are quite grimy, leading to their not exactly “pristine” aesthetic appearance. Of course, some collectors pride themselves in collecting cartridges with mint labels, so it’s going to create a bit of a conundrum, but for those with tattered labels or interested in acquiring notably cheaper carts with said tattered or replacement labels, the new shells are an interesting proposition.

Now, after much planning, a Kickstarter for the project has launched. $15 will snag (seemingly with shipping included) a cartridge shell in black and a free label from artwork you supply. $135 snags a ten pack of cartridges and labels, saving $15. While other colors, including clear and red, have been shown, they’ll only be available if stretch goals are met. 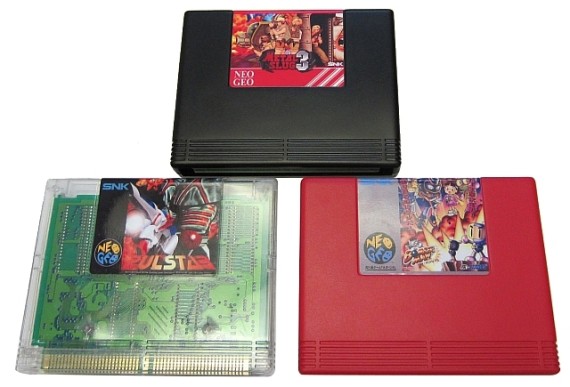 With a goal of $25,000, the project will have to win favor with the majority of the MVS collecting community to succeed. As proper artwork could attract more collectors, it will be interesting to follow the implications of these new shells as their journey continues.