The thing about psychopathy is that it’s not a desire to harm other people, it’s complete indifference to their suffering.  Whether it’s something small like shoving someone into traffic because they shouldn’t have been in the way, or operating on a grander scale like nearly bankrupting an entire country but you’d damn well better believe that multi-million dollar golden parachute remains intact, a psychopath is perfectly fine with coming out ahead at any cost, so long as the price is paid by someone else.  The real-world consequences of their actions are brutal and ugly, but it’s always fun to play as one in a video game.  Grand Theft Auto may let you go nuts in a city or even a state, but for a truly large-scale bout of pure psychopathy you’ll want to manipulate global markets.  NeoColonialism puts you in the shoes of a banker treating the world as your own personal financial pinata, and you won’t stop beating it until every last penny is hammered out and all that’s left is a sad little pile of confetti.

It’s also, oddly enough, a board game, although designed specifically for PC/Mac/Linux.  The board is an upside-down global map, familiar but strange, and you compete against opponents (AI or human online) to suck as much wealth as possible from the world’s regions.  Get the most cash in your private Swiss bank account by the the end of the twelfth turn and you’ll be chauffeured away with victory in hand and the world in economic ruin.  Each turn is divided into phases where players work a few simple strategies in complex ways in order to stack the (metaphorical) deck in their favor.  Investment phase lets you buy votes, Policy is for manipulating governments, and IMF grants one player an opportunity to deal with a crisis to their own advantage. 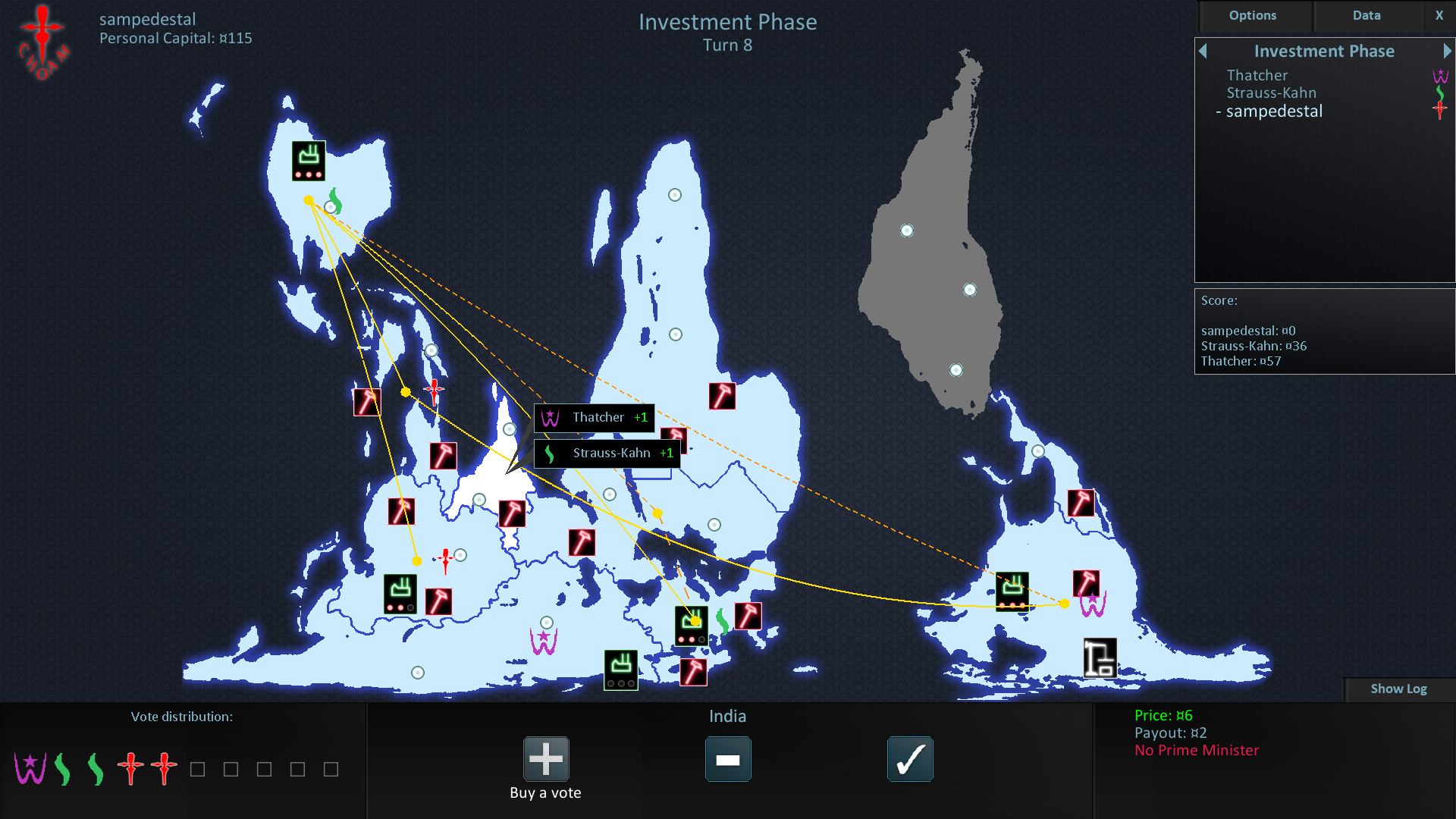 Everything in NeoColonialism is designed to make you feel like a financial bastard.  In Investment phase you’re buying votes, with each vote giving a payout of 1/3 its cost per turn.  A country needs a minimum of three votes player-owned votes to start paying off, though, and while you can buy them all and be a dictator it won’t take long for a coup to depose you.  You’ll need to work with your opponents to exploit the countries to their fullest, electing players to be president/prime minister and developing the country in the Policy phase.  Policies come in three types- mines, factories, and free trade agreements, and the more developed a country is the more expensive its votes.  The whole point of development is to increase the country’s value, though, so that when you cash out your votes they sell for the maximum amount.  If that means, when it’s your turn to be an IMF manager, screwing over a country in crisis in order to turn a quick buck, then that’s perfectly fine.  If you don’t get the payout someone else will, after all, and a little secret dealing with your fellow players can go a long way towards advancing your goals or freezing out whoever’s in the lead. 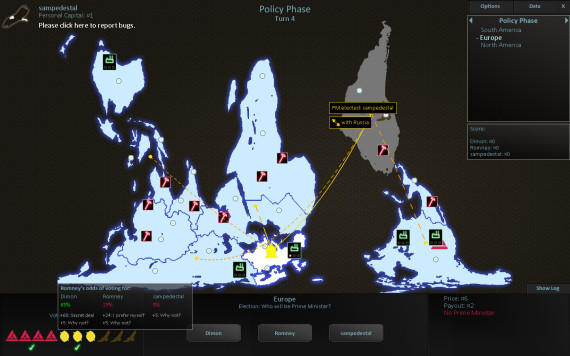 If it isn’t obvious, NeoColonialism is a game with a message, but it doesn’t let that message overwhelm the needs of making the game fun.  It’s definitely from the Screw Thy Neighbor school of game design, which is perfect for a game about being a financial parasite.  How much fun is pulled from the game will be determined by who you’re playing with, but that’s a feature of every board game out there and just because it’s on computer doesn’t make it any less true.  Get a group of friends together (up to 6 players) and it should be pretty easy to have a great evening gouging the planet for all its worth.