“…and then he woke up, and it was all a dream.” It’s a cliché used endlessly in bad fiction to allow a situation to fly completely off the rails and yet have everything remain the same in the end, but what if waking up just restores the illusion of normality? What if there’s no escape from the horrors, but rather a momentary respite until you open the door of the safe spot you wake up in, and all the bad things that had been haunting your brain are still out there? Neverending Nightmares is one long false awakening, and every escape from the previous vision will eventually give way to something worse.

Something’s gone wrong somewhere in the head of Neverending Nightmares’ nameless protagonist. Maybe it’s shock, possibly the loss of a loved one, or maybe he’s just trapped with a brain that can’t help but throw the darkest thoughts possible his way. There’s a black-haired girl, or possibly woman, that something bad may or may not have happened to, possibly a sister, but with reality changing with each new dream it’s impossible to know which bits of info are true and which are just her assigned role for the current scenario. There is nothing that can be called “real”, but a lot that’s unsettling. 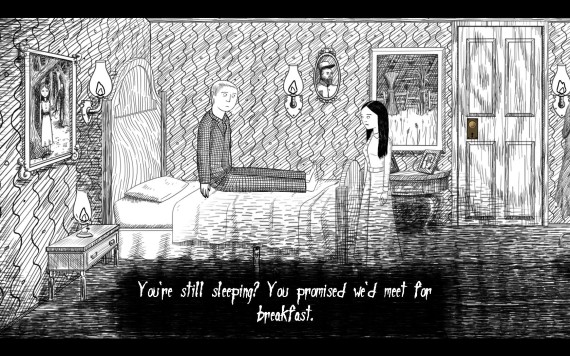 All of this is a direct result of the game’s creator, Matt Gilgenbach, struggles with OCD and depression. The personal result for him is unwanted visions intruding on day-to-day life, frequently involving self mutilation, and while they’d been under control for several years the stress of completing Retro/Grade and then seeing it underperform (to put it kindly) on the sales front brought the visions back. It wasn’t pleasant by any stretch of the imagination, but the experience did make good fodder for a horror game. Fusing the powerful urges and images of OCD with an ever-shifting nightmare where nothing can be trusted and everything is unsettling (at best) is resulting in a unique gaming experience.

At the moment, the game in its current state is still coming together, and much of it is subject to change as the flow gets tweaked.  The basic setup is that you’re a guy in pajamas waking up in bed, and everything is rendered in a black and white linework style intentionally reminiscent of the work of Edward Gorey.  You move at a relatively slow walk through the rooms and hallways of whatever new building you’ve woken up in, through environments that need to be paid attention to for their effects to be felt.  The child’s room with toys scattered about looks innocuous enough on first glance, but the dolls are left set up in a hostile scenario, the blocks spell out unpleasant portents, and even the wallpaper is unfriendly. The endless victorian house is not a happy place to be, and the giant babies that want to hug you to death aren’t making it any more upbeat. 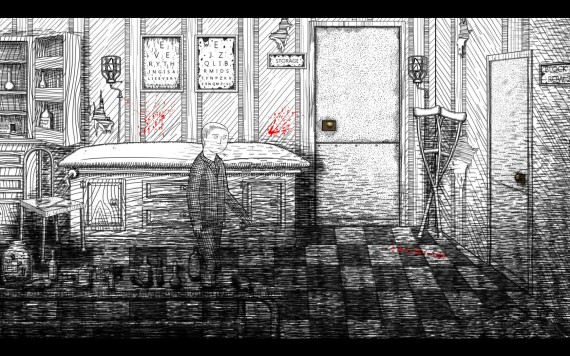 Fortunately the hug-babies aren’t too bright, not yet having mastered the art of peek-a-boo, so hiding in a handy wardrobe (drawn in full color like all items you can interact with) sees them scratching their heads in confusion. You won’t be doing any fighting in Neverending Nightmares, or even much running, because the protagonist is designed like a person rather than a video game hero. He’s got enough on his plate dealing with the terrible visions plaguing his dreams, and it doesn’t help he’s asthmatic as well. Survival is a game of non-confrontation, and the reward just might be waking up with sanity intact, if he can resist the self-harming impulses that also plague his dreams.

While interesting, though, it’s going to be hard to call Neverending Nightmares “fun.” It’s a game that moves at its own pace and demands each new room and area be seen in full, mostly due to the character’s slow walking pace.  Levels are being added one at a time, tweaked based on tester feedback, but each of the four levels available so far moves at its own measured pace.  Personally, I felt the newest level was a bit drawn out, but the alpha testers on the forum seemed to like it quite a bit so maybe I’m just impatient and possessed of the attention span of a caffeinated fruit fly.  Neverending Nightmares is horror doled out carefully, inescapable but ever-present.  It’s a walk through a disturbed mind that can’t avoid the visions it inflicts on itself, and terrible as they are there’s no way out but through.