The Akiba series has gone from being a fanservice-filled RPG to an anime and now an action-RPG. It’s worn several hats, but none of them did much for me. I’ve head of the series, but never felt compelled to try it out. Nothing about it seemed awful — but it just didn’t resonate with me as a bit of a lapsed anime fan. While I still haven’t checked out the anime, Crunchyroll has gotten me back into the genre, so I decided to give Akiba’s Beat a shot. It wound up being quite the pleasant surprise — even if it doesn’t break much new ground. It’s part dungeon-crawler with a modern twist on a concept seen in something like the Neptunia series. There’s still meta-humor and a lot of comedy, but there’s a greater emphasis on making the characters a bit more realistic.

The adventure starts off strong, with a strange premise and then devolves into something mind-boggling. Sure, the storyline is a bit confusing – but that isn’t the confusing part. It’s amazing how the game squanders its early potential so quickly. You’re sucked into this groundhog’s day-esque tale with otherworldly beings, magic, and combat and then all of the excitement quickly goes away. Combat shows promise early on – but never grows beyond that. Things control fairly well, but there are still too many odd button combinations to think of in the heat of battle. Running requires a button press despite most action-oriented RPGs like this one not using one and just allowing the analog stick to run for you. The dungeons themselves are bland corridors and the battle system just doesn’t offer up enough depth to be satisfying. It’s very much Tales-esque, with real-time battles and a 2D plane dominating things. 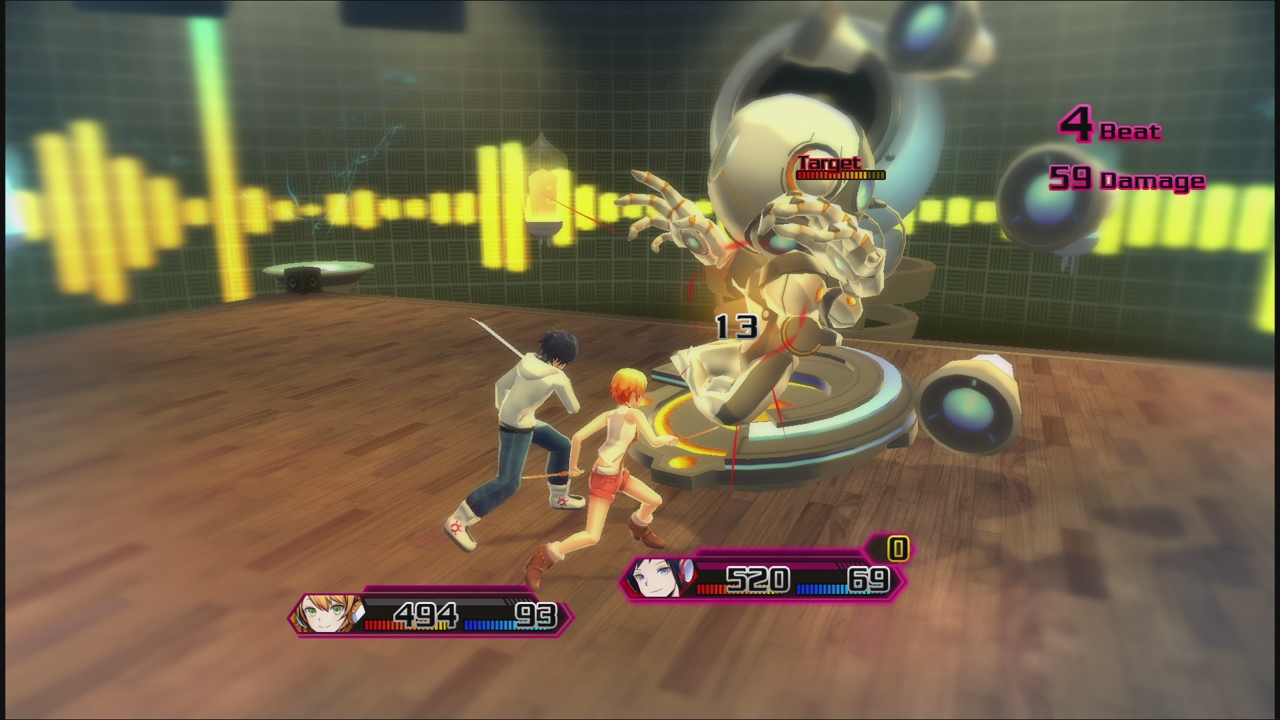 The game’s sense of humor generally always works, though. Asahi is just the right amount of loser and he reminds me a lot of Fry from Futurama. He knows his lift isn’t perfect, but is content and open to meeting new people and doing new things. With the world being one that is full of otherworldly issues that he is one of the few privy to, he also seems like he is a chosen one of some sort. He’s not a super-motivated guy, but he does come off as incredibly likeable and someone that would be fun to hang out with. His relatively high skill level at combat also shows that he has more going on than he lets on — so the plot itself gives you reasons to keep soldiering on even with sub-par combat.

The supernatural elements of it all work and once again, strong character work makes things fun in the long run. Asahi works as being a bit clueless, while Saki is far smarter and more with it. She figures things out for the group and in keeping with the Futurama motif, would essentially be the equivalent to Leela — only with two eyes and a little pig instead of a super-intelligent creature in a diaper as a companion. It’s a shame that the characters and plot just aren’t quite enough to make the complete experience enjoyable.

The combat is too shallow to be worthwhile, and everything between the battle and combat rings hollow. You explore Akihabara and see real-life sights, but the people are just cutouts. In a way, this makes sense since they really don’t matter to the story and they’re just window dressing to the main action. It makes things seem a bit cheap, however, and despite the areas being fairly empty when it comes to an actual world to explore beyond a few shop types, there’s still a healthy amount of loading when you have to go over several larger sections to get to a new objective marker.

It’s a shame the game is so rough around the edges because it’s clear that Acquire cares about it — there’s a lot of effort put into things. None of it gels quite as it should, though, except for the storyline. The combat isn’t terrible, it’s just limited and doesn’t make you want to keep playing. It has you doing the same things over and over and there isn’t enough variety to keep things interesting for long. The story is clearly the game’s strongest point, and it does feel right at home in an anime world full of things like Welcome to the NHK or other shows involving NEETs,  but haven’t really been touched on much in gaming.

Akiba’s Beat offers up some fun — but not enough of it to be worth buying for newcomers. In looking at our past work on the prior PS4 entry, it looks like Undead and Undressed seems a bit more ridiculous, and thus more fun as well.