To get to straight to the point, yes, this is that article. A ridiculous piece that is bound to spring to life every time a new open world game comes out, especially if it involves riding around on animals. Assassin’s Creed: Origins fits this bill perfectly, whether riding on the majestic camel or the classic horse, mounts are everywhere in Origins, which means they need a thorough examining. Luckily, that’s what this piece is for. And for all the time spent riding around ancient Egypt, one thing can be stated as fact — mounts are the true assassins.

At first it might be hard to notice — interesting — isn’t that the mark of a true assassin? The ability to go unnoticed, your prey not realizing what’s happening before it’s too late? Mounts pull a clever trick, not only are they innocently standing idle just waiting for someone to ride them, but the person then riding them covers for them by shouting things like “Out of the way!” or “Move, peasant!” running forcefully over the victim to befall this mounted onslaught. It may look like the rider is at fault, but indeed the mount is the true culprit. 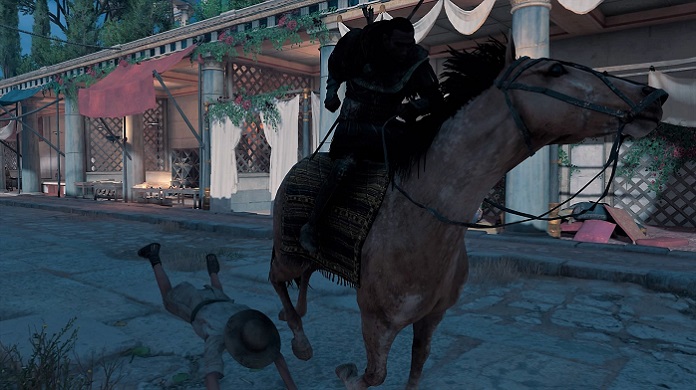 Where mounts truly shine in their quest for carnage is the big cities of Origins, practically littering the streets trampling to-and-fro. No citizen is safe from the rampant beast happy to give anyone a ride as soon as they would run them over. It’s these very cities, however, that help uncover these unchecked four-legged murder culprits. They may be safe further out in the desert where law might go a bit out the window, but in the city streets their desires are made known.

What makes this realization difficult is knowing Bayek’s reliance on a mount. Sure, he could walk everywhere, then again…that would take forever. No one wants to do that. Calling a mount in any crowded setting is a sure-fire way to have innocent civilians seriously hurt. Having personally witnessed the brutality of Bayek’s own mount taking out three civilians at once while coming to his call, how ashamed I felt having let Bayek down. These are the people Bayek is supposed to be protecting, yet he can’t protect them from his own mount. Even if the mounts come with adorable names matched with wonderful back stories, in the end they all have murder in their hearts. It’s no wonder Bayek is constantly changing out his mount, hoping, praying that one day a mount will arrive that won’t want to run over the first civilian it sees. 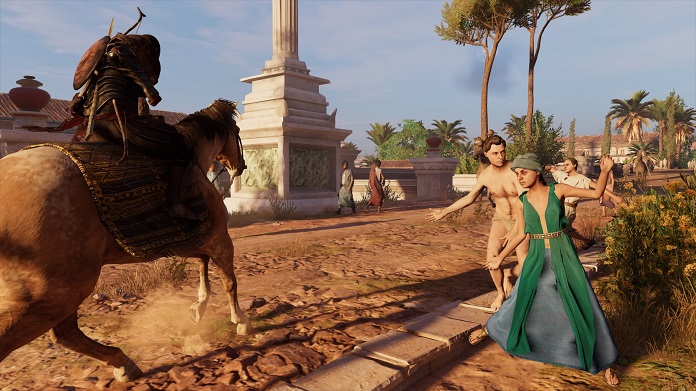 What’s even scarier is knowing mounts are more powerful than ever. Origins follows suit with other games, now having a robust inventory system allowing for full customization of everything. Mounts are one of those things, and of course, the best mounts are the most murderous (literally no proof to back this up). The mounts of Origins just have that sinister streak running down their spine, something that compels them to maim those that would ride them.

The most truly terrifying thing though would have to be the chariot. However useful it is to the citizens of Egypt the chariot is a double-edged sword. The chariot of course comes not with one, but two horses pulling a vehicle that can cause even further destruction. It’s not recommended that the button prompt for following a path be pressed. Having a chariot run its own course not only ups the chances for destruction, but can even lead to things like horses turning into suicide bombers, crashing firmly into explosive pitch, igniting themselves and the chariot on fire. It’s a sure-fire way to cause the most chaos while also killing Bayek. 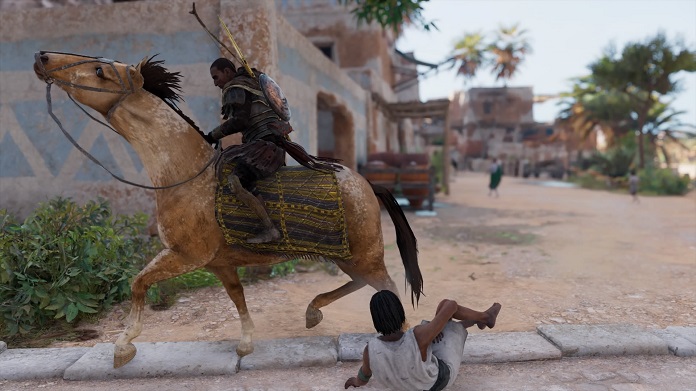 Alas, Bayek is stuck with cautiously riding his mount in crowded settings or can only ride said mount in the open dunes of the desert where it is free to run unchecked. Who knew mounts would turn out to be the power houses they are in Origins? It’s always a gamble in sprawling open-world RPGs how will the mounts function. Easy to say, the camels and horses of Egypt aren’t to be crossed; they will come for you and you won’t even know it.