While 2015 has had an overwhelming number of phenomenal console and PC experiences, it has also seen its share of strong mobile games. In the free-to-play space alone, we’ve had Dragon Blaze, Seven Knights, Zenonia S and now Chromatic Souls. This old school, turn-based RPG had a soft launch in various regions a few months ago, oddly enough Canada was among them, but only now has it hit on a global scale. While there’s a strange burning stigma around the free-to-play market, especially multiplayer games that have a pay-to-win value to them, Chromatic Souls tries to break the barrier for hardcore and casual gamers alike, implementing not too intrusive mechanics while offering challenging, and strategic turn based gameplay. With its release on November 16, we were able to push through the first of three worlds to get a taste of what Gamevil has to bring.

The story is basic enough to get fantasy and Dungeons & Dragons lovers compelled to move forward. It takes place in a mystical realm filled with magic and various fantasy creatures. You play a voiceless hero who comes into leading a group of warriors as they push through a potentially devastating forthcoming war. Chromatic Souls starts things off strong by establishing all the party members you need. There’s a Defender who acts as a tank, a DPS Assassin and Wizard, and a Cleric who is mainly used for healing. It’s the basic formula for any good party-based RPG. If you’re not digging any of these individuals, there are seven others (with potentially more coming down the line) that, while have similar traits to one another, are distinctly different in combat. There’s currently two mages (Illusionist and Warlock), two DPS characters (Scout and Berserker), two tanks (Warrior and Reaver) and one healer (Druid) available outside the initial four. 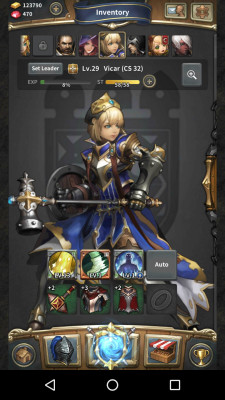 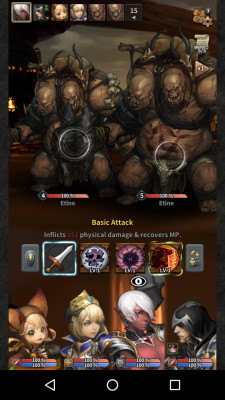 As someone who’s rarely fine with the basics, I went ahead and purchased three others: the Scout, Reaver and Druid. The Scout is equivalent to the Assassin as both can equip bows and daggers, but the former comes with various preset archery abilities. She’s mainly used to increase critical chances, along with ignoring armor. The Reaver is as advertised: a tank. She can draw aggro away from others in sacrifice of MP, along with some continuous damage over turns. Finally, the Druid is more of a healer than the Cleric, starting off with the ability to revive, but she’s far more vulnerable than anyone else. These three offer a significantly different experience than the other four with unique preset skills that are tied to each one. Even though they cross over in specific areas, their passive abilities change the dynamic of battle, especially later on when you promote them to higher tier classes.

The core gameplay is what players should come to Chromatic Souls for as it features challenging turn-based combat. It’s not too difficult that you’ll continue to fail over and over again for no reason, but it’s a matter of equipping your party with the right equipment (higher graded and enhancing will go a long ways), along with being the appropriate level. It certainly helps to bring friends into the battle, but it’s still a strategic challenge none the less. Combat is displayed in a very traditional format, similar to that of Dragon Quest or Shin Megami Tensei, having character portraits (in this case, animated portraits) displayed on the bottom of the screen with their actions, and enemies taking up the rest of the portion. Characters are only allowed to equip three different skills at a given time, with idling, attacking and defending being the other options. It makes it a challenge to properly manage those skills and their cooldowns, not to mention picking which is best for the fight. 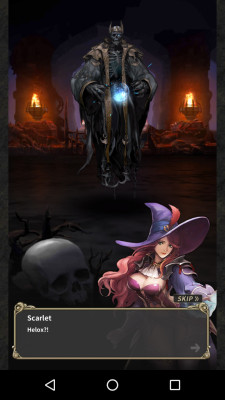 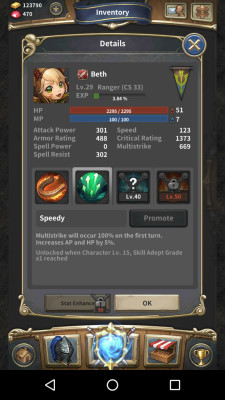 One of the biggest turnoffs a lot of people have with free-to-play games is an aggressive pay-to-win format. At least from my time thus far, it’s not all that imposing. In fact, the game rarely shoves any advertisements in your face, something a lot of other mobile games continue to implement, and you’ll rarely be stuck with little to do. Characters run on stamina to get through each battle, and with stages, especially later on, slowly costing more to attempt, it makes it all the more important to have multiple parties at the ready. This may frustrate those looking to power through the campaign, as this will take a lot of time to get through. At the very least, Gamevil does a great job in keeping your pool of stamina filled, by handing out various potions on a daily basis. Inventory management is something that’s a bit cumbersome, though. Each recruited character increases storage and you can spend in-game currency, but even then, it will always be packed to the brim. Fortunately, the only restriction here is that you can’t do missions until things are sorted out, whereas other games would just discard any items found in the field.

Outside of stamina, there are Gems and FP that are obtained through various means that act as in-game currency. Gems are the more premium currency as they unlock higher grade items and are used to recruit characters. They are also used to revive downed parties from the grave during combat – which becomes incredibly useful when facing bosses, and speed up events such as expeditions where characters are sent off to collect gold, materials or experience. If you don’t want to pay your heard earned cash, you really don’t need to as there are various milestones you are able to accomplish through your time in the campaign that will net you a large amount of Gems. For those such as myself who come back on a daily basis, they have a surprisingly affordable bundle ($3.25) that gives you 150 Gems up front and then 20 each day. This compared to the amount they’re charging for standalone Gems seems like an incredible deal. It’s friendlier than a lot of other free-to-play games in this regard. 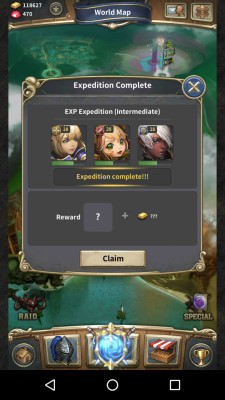 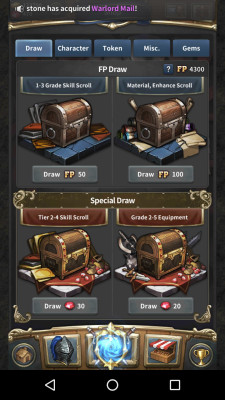 I feel like I’ve barely scratched the surface of what Chromatic Souls has to offer. There are even special dungeons that cycle daily and jump-in-and-out Raids that I’ve completed a couple of times, but not enough to get a full grasp of all the mechanics. While Stamina does recharge at a relatively low rate (one per 5 minutes), I never felt like I was being held back, especially considering the game consistently gives you potions to refill energy. It helps that, at least at the beginning, the game does give the player a fair amount of in-game currency that can be used to recharge Stamina, among other things. Like any free-to-play title, Chromatic Souls also features various complicated systems at play. This includes upgrading equipment, promoting character classes, skill enhancements and much more. It’s a little convoluted in spots, but most of what you need to know is laid out well. There are only a few characters to choose from, but at the very least they are distinct from one another in visual aesthetics and combat. Chromatic Souls has laid the foundation for a potentially grand series, introducing mechanics that will appeal to both hardcore and casual gamers alike.