Incremental games are still a relatively new genre. Cookie Clicker isn’t quite five years old yet and since then there have been hundreds of them released to varying levels of success. Whether you’re making paper clips, growing potatoes, poking cows or hitting monsters in the face, there’s a clicker/idle game for just about any situation. One of the most successful ones is Clicker Heroes and like most of the genre it’s free-to-play but supported by microtransactions. The success of the game was a bit worrying for the developer, though, because buying rubies to speed up the process of racing towards a nonexistent goal in a deeply addictive game is maybe a little to close to psychological drug dealing. Clicker Heroes 2 has zero microtransactions and is priced to match. The thing that sent a sticker-shockwave through the community is that the price is $29.99.

The news brought with it quite a few questions from the original game’s fans, but it all boiled down to just the one inquiry, “$30 for a clicker!?” with the subtext of “What on earth is wrong with you people!?” Developer Playsaurus held firm, though, and as it turns out the pricing is the right call. 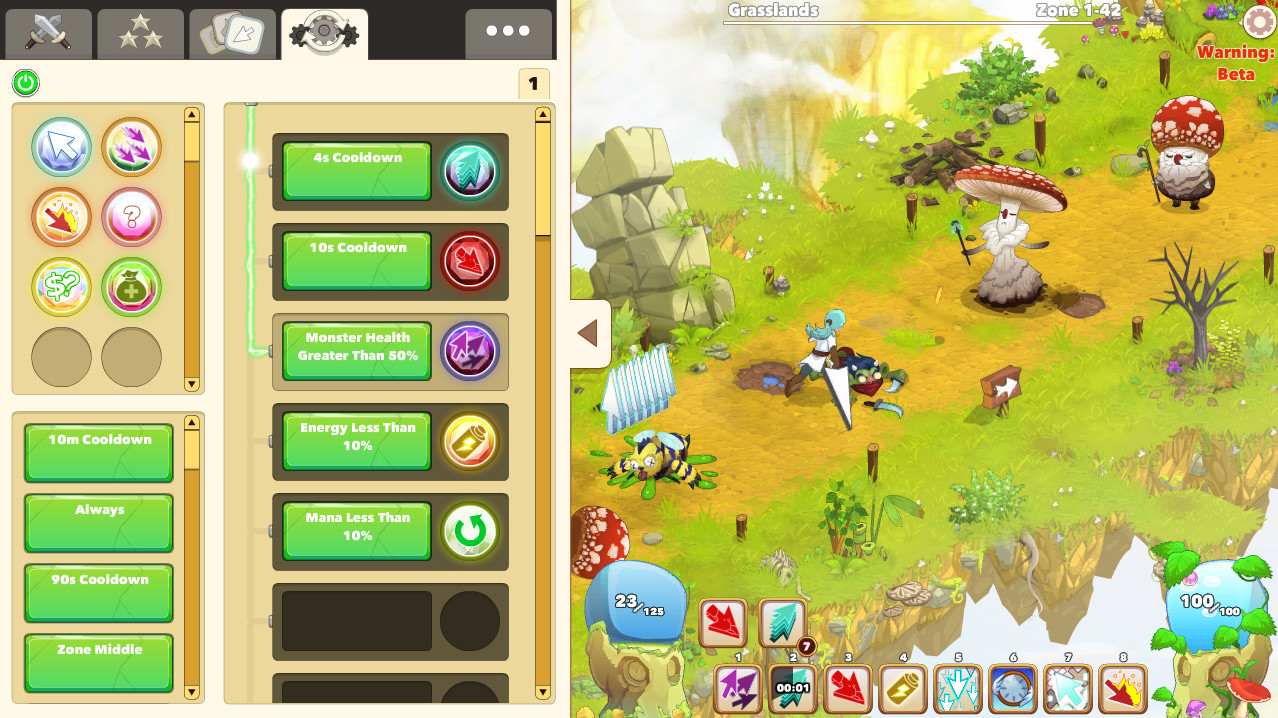 Clicker Heroes 2 was released on 7/16 and has been hanging out at the top of the Steam Best Seller list since the moment it went live. This means a couple of things, with a whole pile of disclaimers to go with them. First up, while they may be grumbling a bit while doing it, people are paying for the game anyway even with the massive pile of disclaimers about its beta state. Is it “worth it”? Well that’s a question only the purchaser can answer, but based on the position on the sales chart it seems the answer is “yes”.

The thing about an incremental game, whether clicker or idle, is that it’s something running quietly in the background over the course of months. It’s doesn’t demand the kind of heavy engagement of something like God of War or Red Dead Redemption, but rather is something to prod at a couple (or several) times a day as the numbers keep getting bigger. Just because the attention investment is diluted doesn’t mean it’s less and the long slow burn offers a different kind of reward than a more traditional game. A good incremental game has multiple systems all working together for the player to untangle (Realm Grinder being the poster-child for this) even if the payoff happens in small pieces doled out over a very long period of time. 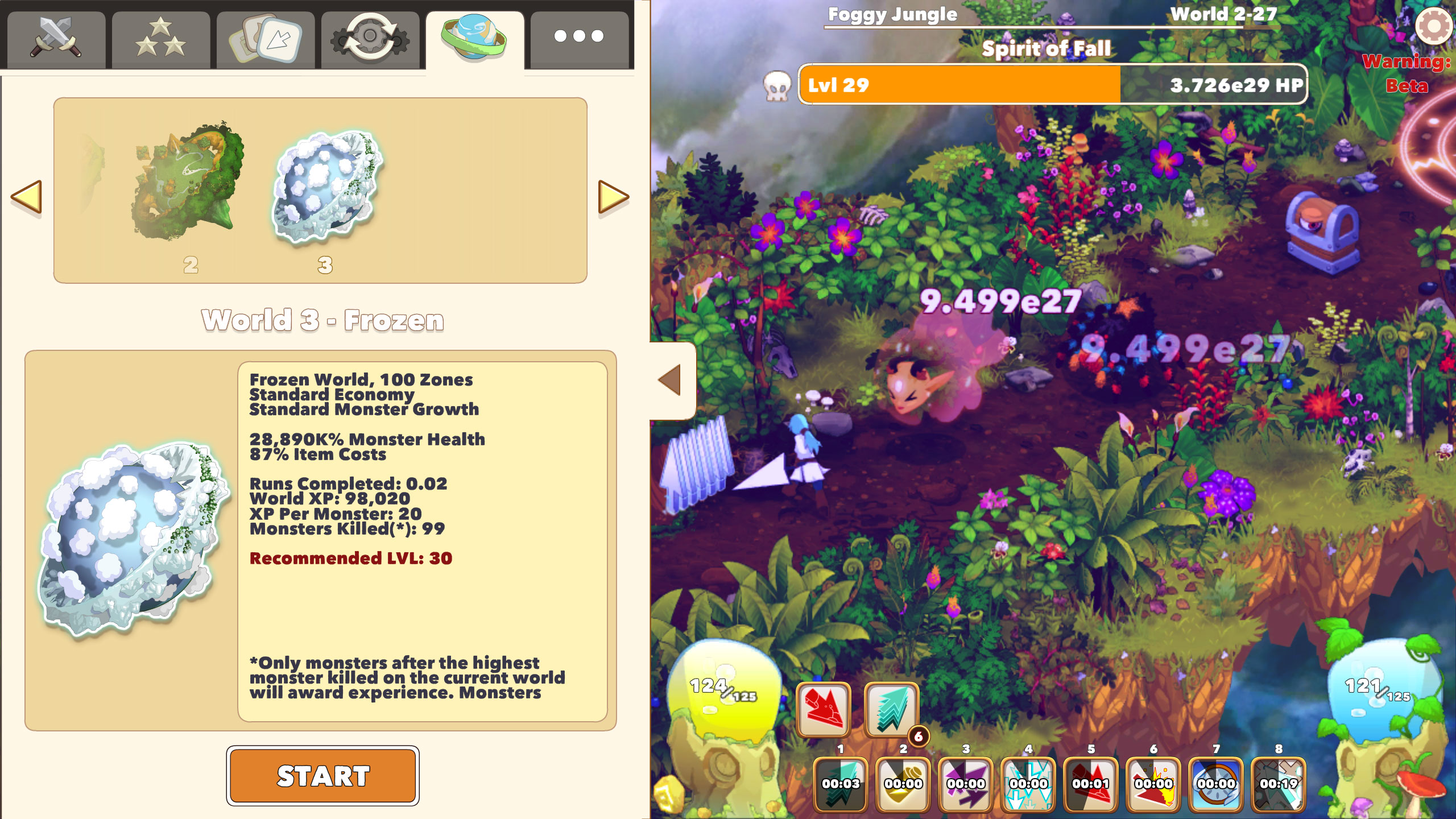 One of the common threads of the price complaints is “it’s just a clicker”, which is one word to many to be true. “Just” has no place in that sentence for the people who enjoy them. It’s like saying “it’s just a match-3” or even worse, “just an indie”. If the person saying this doesn’t find the value that’s perfectly fine, but there’s also an attitude of “the things I like are awesome and the things you like suck” involved in it, so… no.  Videogaming already has enough of an inferiority complex as it is without reinforcing the idea that Genre A is worthy while Genre B is a ghetto from whence nothing of any quality can emerge.  Dr. Robotnik’s Mean Bean Machine and Tetris Attack had no genre stigma when they were released, and while an endless deluge of iOS free-to-plays has devalued them, if Tetris Effect clocks in at $30 I have a hard time imagining it being seen as a problem.

The other big issue people have taken with Clicker Heroes 2 holds a bit more water, though, and that’s its beta status.  This is perfectly fair and a valid viewpoint to have, with the obvious solution being to buy the game when it’s farther along.  Playsaurus aren’t hiding the game’s current status, and state right up front that current saves are going to be wiped when the game goes from beta to “stable Early Access”.  If that’s a problem then yes, holding off for a while makes perfect sense and is highly recommended, although it doesn’t seem likely a player with this perspective needs to be told that seeing as they already know.  If the whole beta thing is being used as a justification to want the game to be cheaper, though, that’s a different thing entirely.  While the game in its current state would have a hard time justifying the $30 entry fee, like most Early Access games you buy in as much for the fun of watching it develop as actually playing. 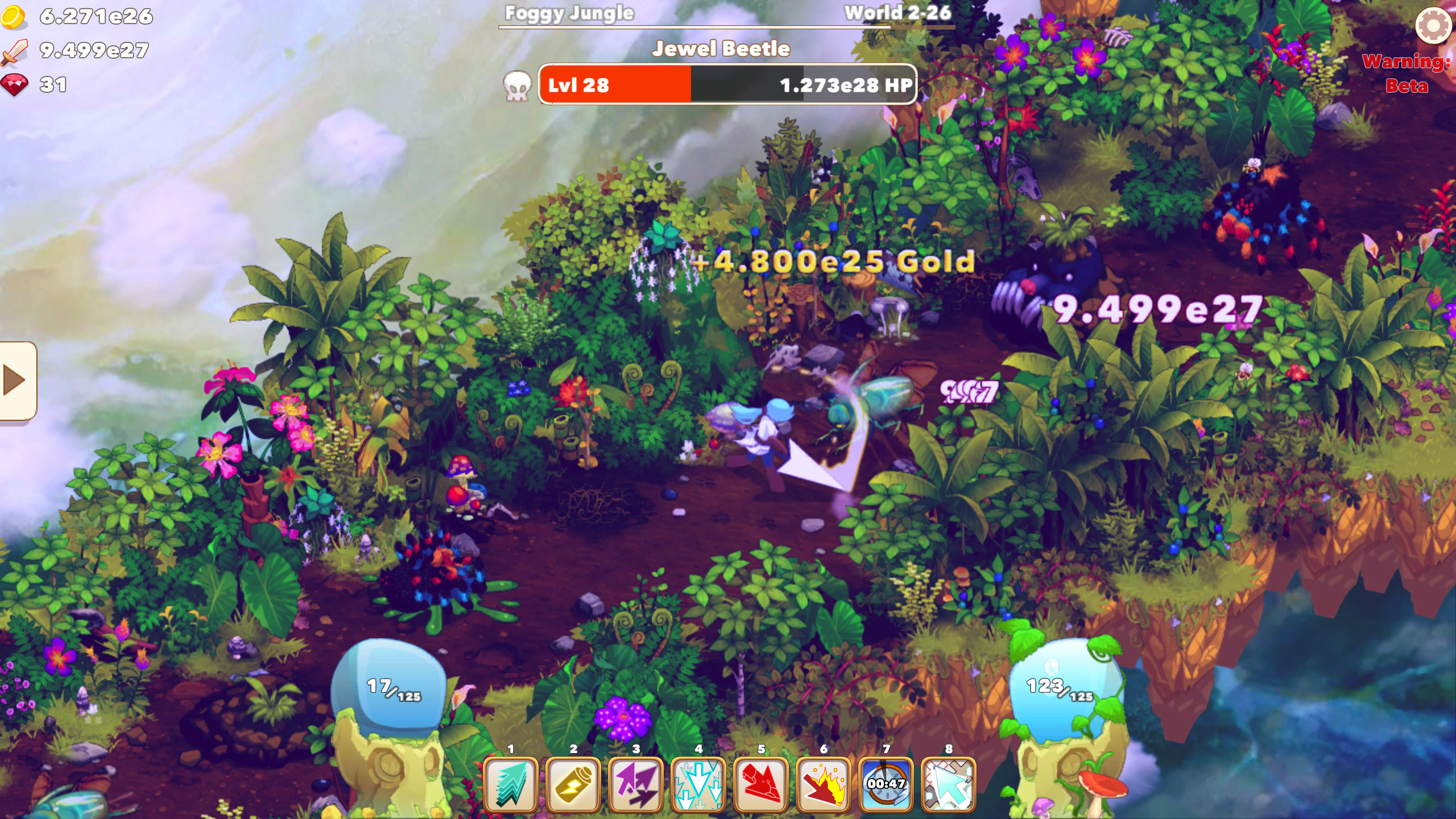 Playsaurus’ dedication to Clicker Heroes bought them a lot of goodwill from their fans.  Even after the game reached a 1.0 status there were more and more updates adding a pile of new content and tweaking the numbers on what was already there and there’s no reason to believe that Clicker Heroes 2 won’t receive the same attention.  While it seems likely there are a few dozen systems not even hinted at yet on the way, what’s available now already feels highly polished.  The art for monsters and backgrounds looks great, and the animation for the hero’s attacks is smooth and detailed.  The basic systems have a good amount of detail, whether it’s choosing pieces of armor for specific bonuses or figuring out the best way to work the automator to pop out attack abilities for you, and the hero’s skill tree is utterly gigantic.  Current plans call for a player reset at level 200 with a huge power boost to go with it, plus a second playable hero with his own skill tree to explore.  There have even been two small patches since launch to fix issues and balance skills.

So does that mean Clicker Heroes 2 is worth $29.99?  If you like having a game run quietly in the background for you to check in on now and then, making a few simple decisions while the numbers get endlessly bigger over the course of months of play, and also don’t mind waiting as major chunks of the game that completely redefine how it’s played get created, then probably yes.  Otherwise, probably no.  It’s your money and your call, and you know both your tastes and budget better than I ever could.  For the sake of everyone’s sanity, though, maybe it’s time to retire the “It’s just a ___, it shouldn’t cost $xx.xx” argument.