Remasters have been all the craze the past five years as technology has allowed to bolster classic games and modernize visuals for a better experience. A few years ago, EA had announced a new Command & Conquer game, and much to the chagrin of the fan base, it was revealed to be a mobile title. The series went a completely different direction about fifteen years ago and then disappeared altogether. While the mobile game was solid for what it was, it wasn’t a true Command & Conquer. EA came back and announced that it had brought some members from the original Westwood development team to work on a remaster of the original RTS titles from the 1990s. Many believed it would never happen, but here we are, and the Command & Conquer Remastered Collection has released in all its nostalgic glory.

If you grew up in the 1990s playing PC games, real time strategy was what it was about. Prior to Unreal Tournament and all the FPS, most players were on games such as Starcraft and Command & Conquer. The Command & Conquer Remastered Collection contains the original game along with Red Alert. All expansions are included with the collection and are integrated seamlessly into it. C&C told its own story involving the GDI vs the infamous Kane-led NOD. The idea is to build a base, build an arsenal and eliminate your enemies. Red Alert focused on an alternate post-World War II universe and some of the technical lore you hear about from that era. What makes these titles so special are the cutscenes when playing the single player missions. These all make their return and while the gameplay got an increase in graphical fidelity, these videos did not and that’s disappointing.

The graphics are no doubt the most notable improvement, if not the only improvement. While these titles in the collection may have not been the most colorful games to begin with, the new art style and the animations are nice. Reflections off of buildings and units help bring the architecture to life. Seeing infantry doing certain animations like cocking their rifles help you appreciate the little details that went into the graphical update. You can even zoom in on units and appreciate the detail even more. The games can go back and forth between the new look and old sprites. The titles have no issues rendering at 4K resolution and even with a ton of action going on, the frame rate never budged. You can unlock bonus content such as behind-the-scenes video for the making of the games. The initial video, which feels like its pulled directly from a 1995 straight to DVD movie, opens the floodgate for that nostalgic wave. Do I love the campiness of this series? Absolutely. 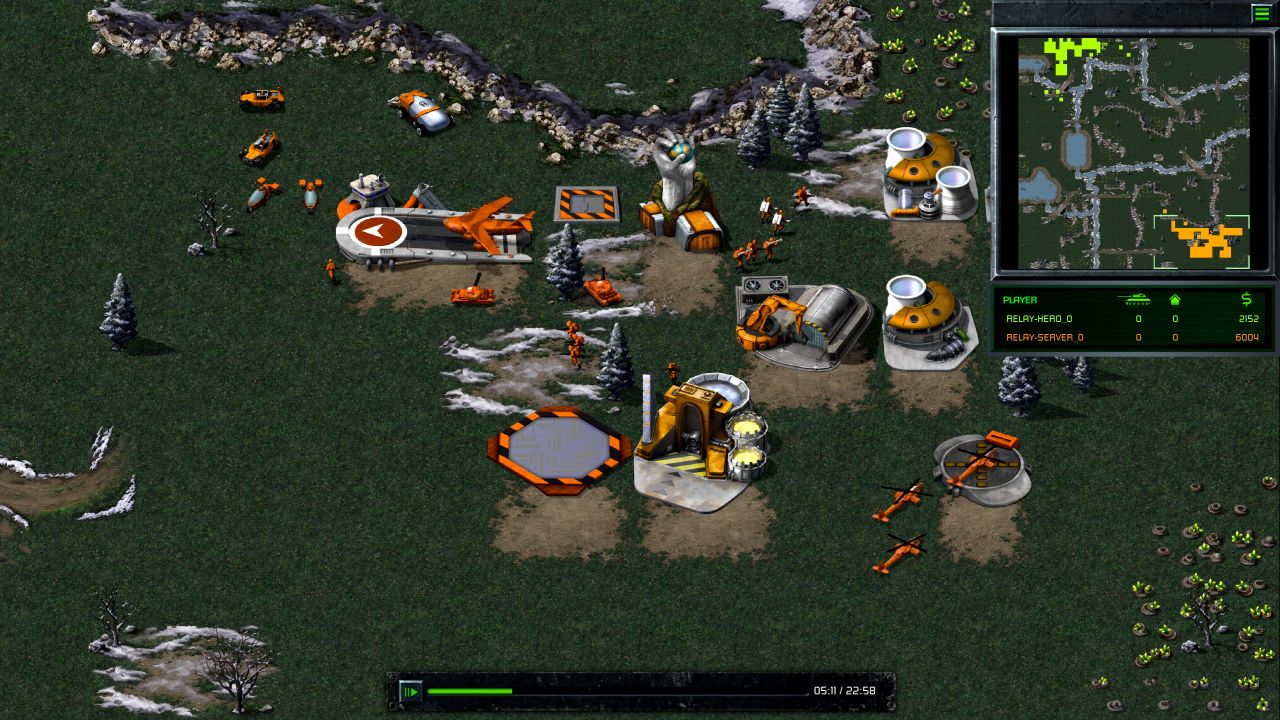 All of this feels fantastic but everything comes back to earth after an hour of play. No one really notices this type of stuff when they’re younger, but as time goes by, there’s a simple formula to these old RTS games. There may have been a lot of work in creating new artwork and improving the user interface, but the gameplay is unchanged. Whoever gets the quickest access to the best army are the ones with the upper hand. It’s hard to stop fifteen mammoth tanks. Legacy issues still exist with the series that went unaddressed. Ore trucks still rock the rose-colored glasses and make no attempt to defend themselves or flee. Some units are super aggressive while others stand by and do nothing while your base gets ransacked. It’s possible that the team did add balance between the Allies and Soviets, but the Soviets are still the clear favorites, and the same can be said for the GDI and NOD with the NOD being favored. If you’re playing this for the first time, there are only two factions per game even though there are multiple countries in Red Alert. If you wanted the game to stay the same, it has, and that can be for better or worse. Purists of the series will appreciate this. The original C&C did not have a Skirmish Mode, but that has been added here even though it feels slower-paced than Red Alert. You can also choose to play with units from the expansion, which is recommended. Missions from the expansions are also listed separately in the menu.

While the gameplay and lore may be legendary for this series, it’s the soundtrack that stands above the rest. The original soundtrack of all the titles returns and it also includes remixed songs. Even the remixed songs are fantastic to hear. The quality from the OST is unmatched as the music may be the best in gaming ever. The voiceovers during the game return and are just as campy and legendary as ever. The Collector’s Edition features a USB key that includes the soundtrack and this is no doubt worth listening to on its own 25 years later. You can’t help but laugh at the voice overs included in some of the songs. 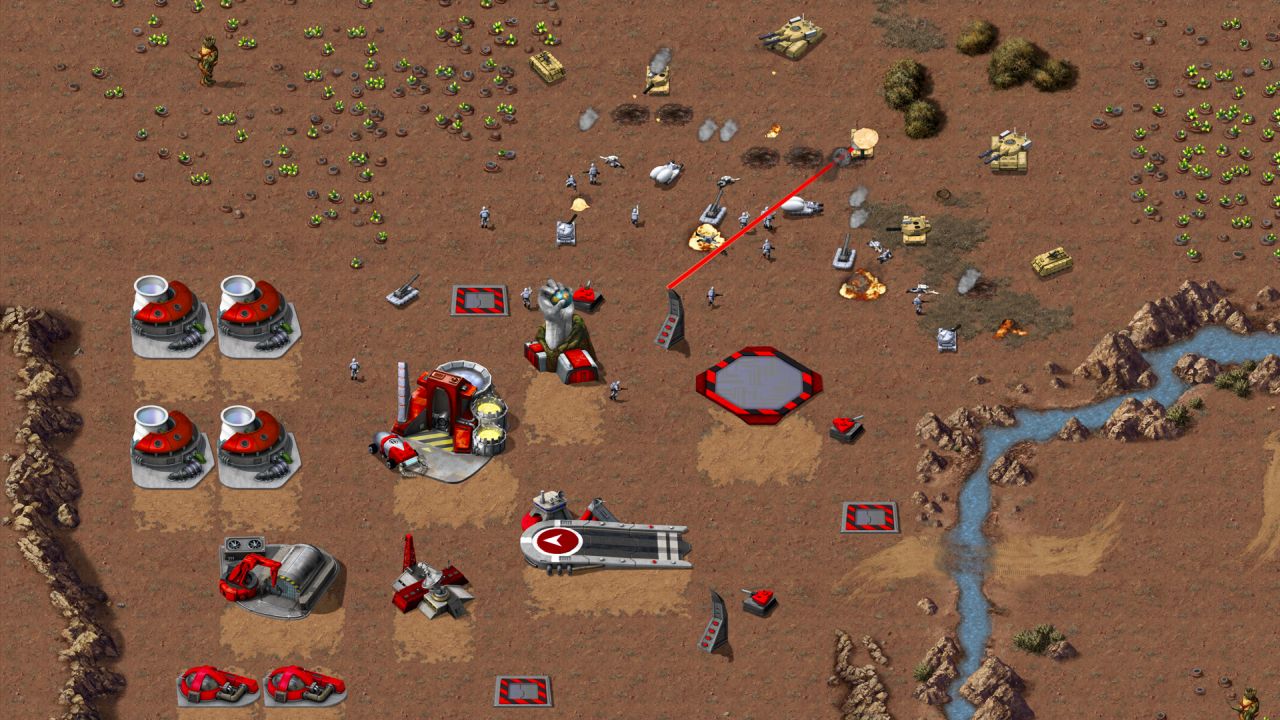 The C&C Collection includes a map editor and it feels like it was pulled directly from Windows 95. There isn’t a tutorial to help you out. You are presented with a blank template and having to figure out what to do. I created a map and everything just blew up when it launched. So even if you have trouble creating maps, plenty of people will be able to create and share via the Steam Workshop. This collection will include full mod support so it’s possible that somebody could address the legacy AI issues, but the code is available for anyone to do with what they choose. Both Steam and Origin will have versions of the game and multiplayer is integrated in-game. I played with developers with multiple people and there was never an issue with lag or disconnects. Gone are the days of having a third-party application to play this online. It even does some stat tracking, but not a superb amount. The online options allow for a quick match and to either host or join a game with up to eight people depending on the map. Players can even infuse custom maps to play with online.

The Command & Conquer Remastered Collection is a collective project between Lemon Sky Studios and Petroglyphy Games. With two different teams working on the title, it still feels like more could have been done. As a big fan of the original games that launched 25 years ago, however, this is no doubt a must have for players. The graphics and the remastered music are both the biggest changes to expect. The multiplayer is now seamless and the ability to create and share maps will add even more life to the collection. It only retails for twenty dollars so there’s no reason to not pick it up; the visuals are worth it alone. Just don’t expect any quality-of-life improvements involving gameplay outside of mouse button preference and the in-game menu. This collection was developed for the fans while keeping the core gameplay in tact for better or worse.