Destiny’s official box art was revealed today and boy is it beautiful. Continuing the trend of not having the entire view of character’s faces on a cover, the Destiny box art features the three classes of Guardian — Titan, Warlock and Hunter — with their back to the viewer looking up at The Traveler. It’s a subtle shot and box art, foregoing any explosions or epic battles, but it captures the “awe-inspiring” nature of the game perfectly, with the logo stylistically overlaying the shot. It also helps that it goes perfectly with the color scheme of the PS4 box.

It’s worth noting how much more appealing the box art of Destiny is when compared Titanfall. While the Titanfall artwork looks decidedly nice, it also looks more like concept art and is less immediate than Destiny’s. Of course, it’s not so much the artwork’s fault as it is the giant “Respawn Entertainment” and “EA” logos and the much maligned “Winner of Over 60 E3 Awards” badge that takes up far too much real estate on the box.

While the games aren’t direct competitors, both do offer massive online experiences and were the top dogs at E3 2013, so comparisons in marketing are apt. Check out both below: 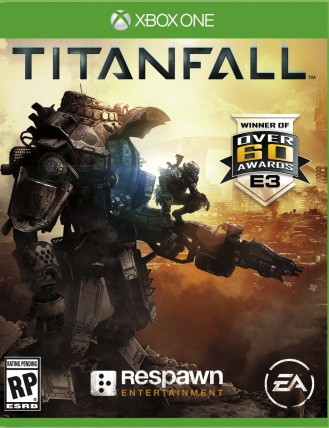