EDF 2025 picks up the alien invasion a mathematically-obvious eight years later.  The bugs had gone deep underground and now they’re bursting out to try to destroy the world again.  The EDF learned their lesson the first time, however, and now they’ve got not just Storm 1 and his gigantic arsenal of death, but also three new character classes each with their own skills, abilities, and weapons.  There are over 700 different kinds of guns, explosives, and other goodies to arm your character with, providing a near-infinite amount of combat strategies.  The destructive options only get deeper when working in multiplayer, which supports two player co-op on one system and four player online.

The first character class is the Ranger, which is basically the ever-versatile Storm 1.  He’s a good all-arounder, fast and nimble with a highly diverse weapon selection.  Basically, your classic run and gun soldier. 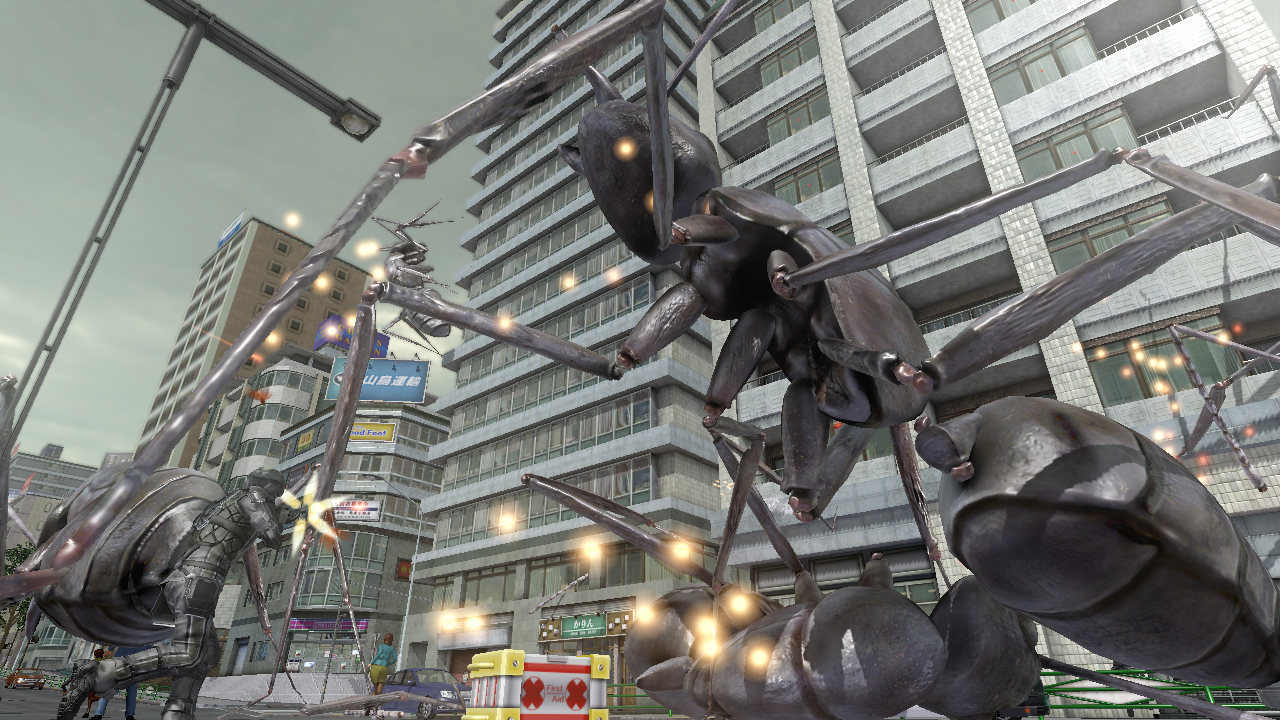 Next up is the Fencer, who’s a beast of a fighter in giant heavy armor with giant heavy weapons to match.  Before a mission begins all characters can choose two weapons to carry, but the Fencer is the only one who wields two items at once so he gets four total.  Gun and shield, rocket launcher and melee weapon, whatever you choose it will be somewhat slow but powerful.  In the E3 demo he was the one being used to show off a two-unit weapon, in which his incredibly powerful rocket launcher required the laser targeting wielded by the Air Raider. 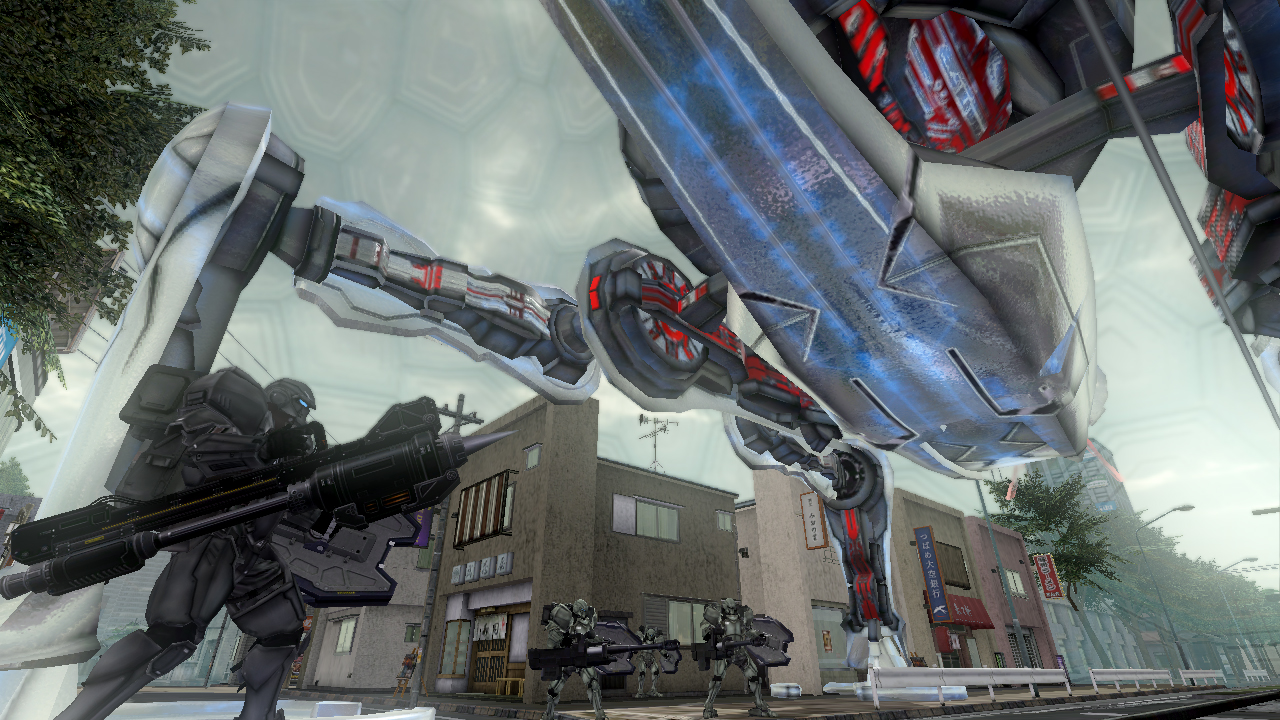 The Air Raider is more of a support unit, capable of calling in tanks and other vehicles as well as air strikes.  He’s a highly tactical character, and incredibly useful when using the proper strategy.  It was hard to get a sense of his weapon selection due to the text being in the E3 build being Japanese, but the more normal gun was a sticky-bomb launcher whose explosives sat there blinking an ominous red until you hit the trigger.  Tagging an ant with a few bombs and then waiting for it to get near an enemy cluster yielded a highly satisfying splattery explosion.  The Air Raider’s second weapon was a helicopter-dropped stationary gun turret, which was great for chewing through the writhing insect mass until they finally did enough damage to destroy it.

The last EDF member is the Wing Diver, which is the updated version of Pale Wing from Global Defense Force and the PSP version of EDF 2017.  Her armor is low, but she’s the most mobile of the lot thanks to her flight capabilities.  She can’t fly forever, of course, but careful management of the energy gauge can keep the Wing Diver in the air long enough to escape or (if you do what I accidentally did) fly into danger, or just get a good vantage point on top of a building.  Her weapon selection is mostly energy based, and the tradeoff for not having to track ammo is that her guns are somewhat weaker than standard projectile weapons. 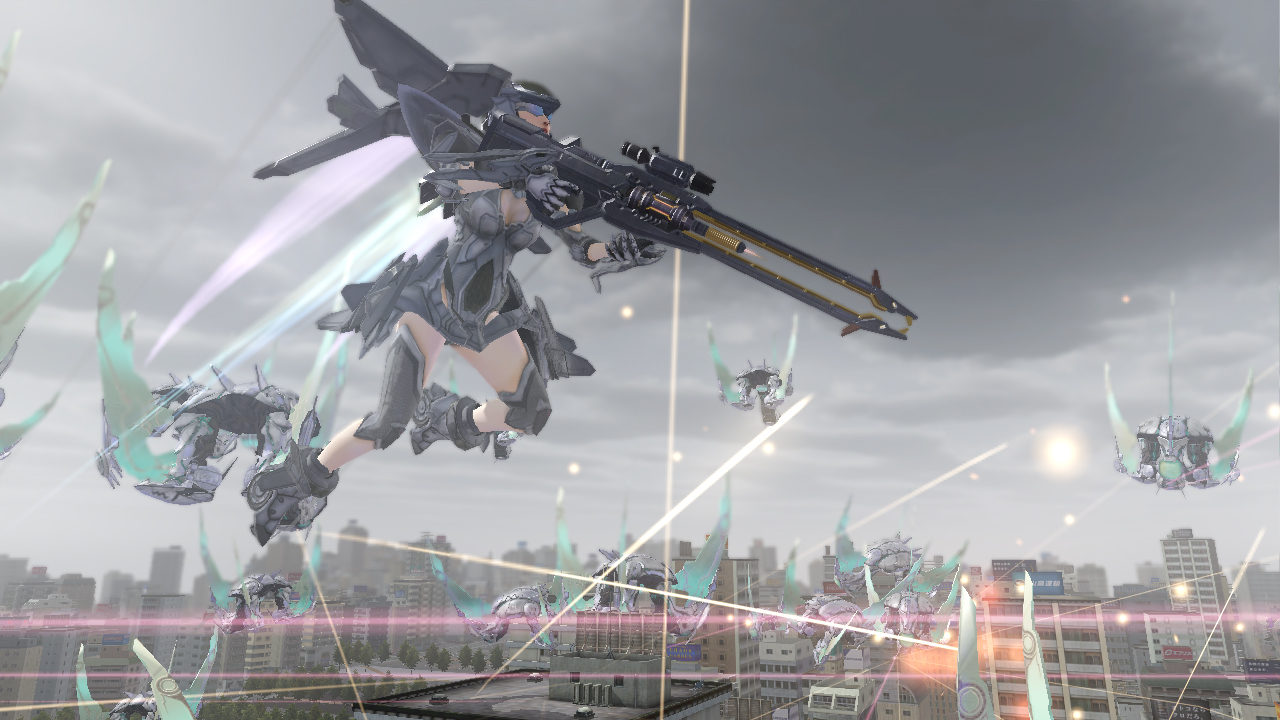 The important part of Earth Defense Force is the action, though, and EDF 2025 looks to be as hyperactive as ever.  Picking up the controller and playing each of the classes showed them to be well balanced, capable of laying down gigantic amounts of firepower that still won’t be enough against the incredible numbers populating the enemy swarms.  Ants and spiders are back, with new species promised, and the giant Hector robots come in new models that explode in sky-filling bursts of fire.  The action is solid, control feels right, and there’s a ridiculous sense of humor running underneath it all.  Earth Defense Force 2025 was one of the most purely fun games at this year’s E3, and the wait for its 2014 release is going to feel like forever.