The “Fate” series is outrageously popular in Japan and increasingly so in the west thanks to its anime and video game renditions. Even though we’ve seen an increasing presence of the games in English, I’ve never ended up actually playing one. As such, it’s hard for me to go into Fate/Extella: The Umbral Star and explain whether or not this showcases the characters and storylines in an appropriate fashion or anything like that. All I can really do is gauge, from an outsider’s perspective, whether the gameplay is particularly enjoyable or not. Luckily, it turned out to be a fun demo because of its utter simplicity. 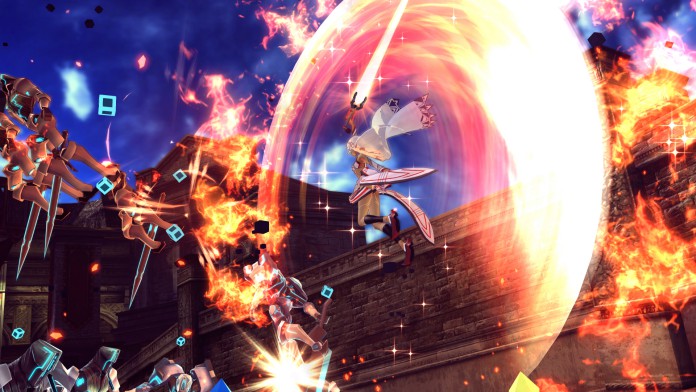 It appears that Fate/Extella: The Umbral Star follows in the tradition of many hack ‘n slash titles from throughout the years. Players are immediately thrown into a stage and tasked with converting regions of the map to their side. All the while, enemies will similarly be trying to take regions for themselves. This leads to a tug of war between the map as both sides vie for dominance. One of the biggest challenges is getting around the map as there are only specific warp points between each area. Because of this you may find that the enemy has begun to take over a certain quadrant which is super far away from your current position. At that point the game becomes ever so slightly strategic as one decides whether to spend time racing to the location or simply converting closer regions.

But that’s basically as far as the concepts of strategy go. Actually clearing up enemies from an area just requires beating up hordes of the same enemy types until a stronger servant appears. These midboss types should really be your focus as killing them off usually clears the enemy influence from a zone. So even when there are swarms of baddies your goal is typically simply to hone in on one specific enemy type to defeat. It’s an easy concept that should be familiar to musou fans. Despite tons of bodies and flashy attacks on screen it did not appear that much slowdown occurred during fights. That’s pretty good when you consider all the action constantly going on when they’re busy being slashed to bits. 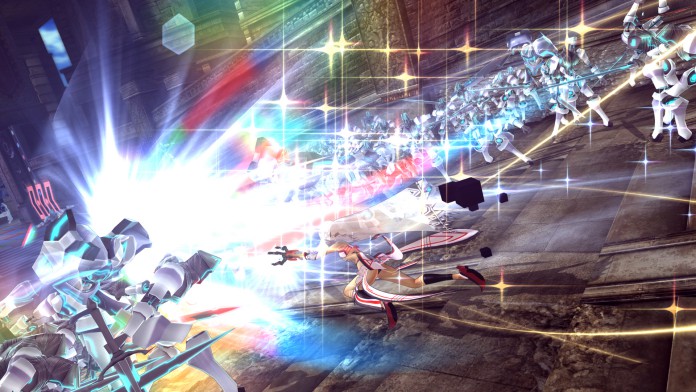 When finally at a demo kiosk, I immediately sunk into the task at hand. I aimed straight for the proper targets instead of attacking hordes of minions just because they were there. After clearing an area, my attention went completely to finding the next spot to attack. Despite all that, it seemed that the enemy were always capable of keeping pace. After defeating a huge boss and nearly winning, it took less than a minute before they caught up and destroyed some of my zones to even out the playing field again. This continuous battle of back and forth did not deter me. Despite the incredibly simplistic gameplay, or perhaps because of it, my desire to succeed remained strong.

It was only after practically zoning out in front of the kiosk for a while did I realize that this was a great demo for Fate/Extella: The Umbral Star because it gives a true sense of the tug of war battles likely to occur in the full release. It’s also an awful demo to bring to E3 because “completing” it requires a fair amount of time spent playing which is totally unfair to people waiting to try it out. As such, after getting super close to winning multiple times, I put the controller down and let someone else take a shot at it. The game is mechanically sound and tremendously simple in execution. Those who are looking for a mindless musou with Fate flourish will certainly find it in this title when it arrives on PS4 and PS Vita later this year.