There’s no denying that when it came to its gameplay, Evolve has always sported its fair share of glowing pre-release coverage. Turtle Rock’s 4v1 asymmetrical multiplayer title’s biggest criticism came in the wake of accusations that its mere existence was to serve as a framework for downloadable content sales. While this is perhaps the most cynical way of looking at the situation, it’s hard to argue that the Evolve team hasn’t handled its DLC practices in the most appealing manner. One only has to take a quick look at the in-game store to see that 2K and Turtle Rock certainly wouldn’t mind having your money: 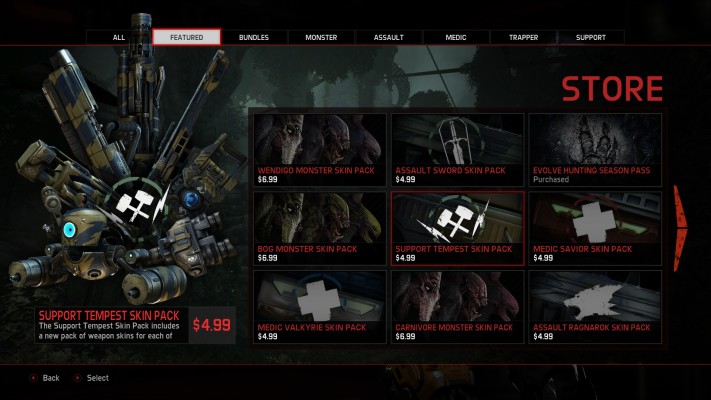 Our copy of Evolve came with the Hunting Season Pass, which currently retails for $24.99. One would think that a great deal of this content would be included in a package dubbed a Season Pass, but it merely includes four future hunters and a single skin for each of the three monsters available at launch. A separate Monster Expansion pack will be required for the downloadable monster additions, meaning that Evolve will essentially feature two halves of a single season pass. It’s worth noting that players will be able to download individual monsters for the cool sum of $15 each. On the lone bright side, new maps will be completely free, so as not to alienate the segment of the player-base that doesn’t want to fork over even more cash for paid DLC maps.

The news that you’re able to spend $60 on Evolve‘s cosmetic Day One DLC is quickly making its rounds around the Internet, and for good reason. Take into consideration that consumers are spending $60 on the game itself, and then ask yourself whether or not buying $60 worth of character skins is worth it under any circumstances. Class Skin Packs are available for $4.99, Monster Skin Packs can be had for $6.99, while individual character Skin Packs cost $1.99. While there aren’t any intrusive messages constantly telling you to spend your money in Evolve‘s in-game store, there are subtle hints dropped here and there that can come across as downright insulting. Suggesting that a new player equip skins that they don’t currently have is not a “helpful hint,” it’s subtle marketing hidden under a veil of friendliness. 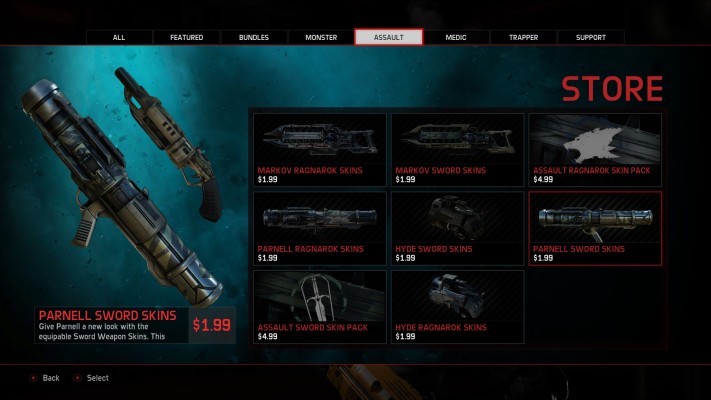 Perhaps the most shocking element of Turtle Rock and 2K’s DLC model is the blatant willingness to target the ever-powerful “whales.” Evolve‘s developer and publisher likely know that most players will stay away from these overpriced cosmetic additions, but a certain user-base will find a way to buy all of it. Being able to sell one game for the price of two isn’t just good business, it’s maniacally brilliant when it works. Whether or not gamers will fight back against this troubling in-game storefront is anyone’s guess at this point, but this could be the sign of troubling things to come if we aren’t careful.