While Evolve has brought up a number of interesting, and potentially disturbing, questions, there’s one that just sticks out like a sore thumb. Why is Wraith so overpowered? Sure, the stealthy ghost creature has been patched following the most recent Beta, but the fact remains that the final unlockable monster is a drag to play against. In said Beta, she boasted a roughly 70/30 win-loss ratio, something completely unheard of in a character-based multiplayer game hoping to thrive on the back of balance. After some of Wraith’s abilities were tuned down, namely the fact that she was able to warp while using the Decoy ability, it’s hard not to wonder how she ended up in Evolve in the first place.

Here’s a completely unscientific measure for determining whether or not a character is fun to oppose: if a great deal of players let out an audible groan of annoyance when she pops up on the selection menu, she’s probably not all that enjoyable. Let’s go over the basics, shall we? All indications are that Wraith sports the highest damage per second while also boasting the most useful evasion techniques. It’s not hard, even when caught in a Mobile Arena, to avoid nearly every bit of oncoming gunfire. A few warps here, a decoy there, and you’re going to be able to buy yourself the time the get out of the sticky situation you find yourself in. Even if she is caught during Stage 1, it’s definitely possible to evade oncoming attacks. Anyone who has spent any amount of time with Goliath and Kraken, Evolve‘s first two monsters, knows that being trapped in Stage 1 equates to almost certain death. With Wraith, it’s merely a detour on the road to victory. 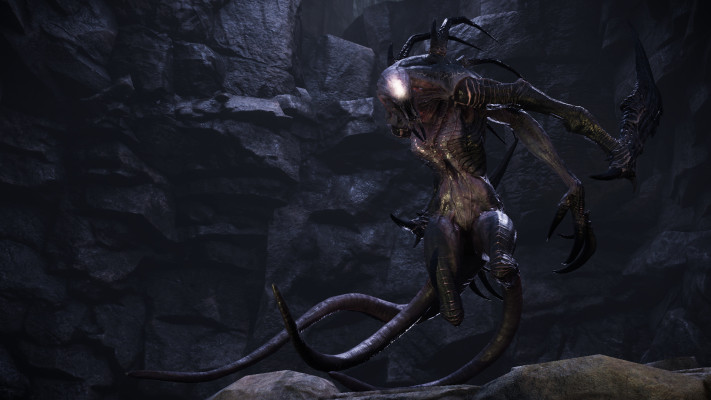 This isn’t to say that Wraith isn’t without her faults. She is the character with the lowest health and armor level, and that definitely counts for something. Those who are inexperienced with the final monster might find themselves taking damage quickly, though to be fair, Wraith’s mechanics are only mysterious until you use them a few times. Because she is locked behind Evolve‘s downright grindy progression system, it could take hours upon hours to get the play experience needed to understand how to properly hunt her (it took us 17 hours to unlock Wraith). This puts every player, including those who have spent significant time fooling around with the various Hunter classes, at a distinct disadvantage until they get the chance to experiment with Evolve‘s controversial third beast.

Wraith isn’t just a problem for Evolve‘s user base, she feels as though she doesn’t belong in Turtle Rock’s asymmetrical title at all. Good Monster players thrive on being elusive and causing maximum damage in a minimal amount of time, two things that Wraith makes incredibly trivial. Whether or not she’ll have the 70% win-rate she did in the final Beta won’t be known for some time, but it’s becoming abundantly clear that Hunters are at a real disadvantage every time she touches down on Shear. In order for Evolve to maintain the balance it’s hoping to create, something has to be done about its most unbalanced and enigmatic character sooner rather than later.