With the release of Far Cry 6 there’s no shortage of conversation around it. There’s the obvious discussion of the political overtones in a game that the developers have declared to be apolitical. Or speculation that the phrases “true Yarans” and “fake Yarans” are references to some current events in America. Or fans of The Boys, The Mandalorian or Breaking Bad might want to discuss Giancarlo Esposito giving another great performance as a villain. Maybe people want to discuss elements related to gameplay, technical performance or microtransactions. But one topic that remains unmentioned remains discussing, and that’s the Yaran chickens. Mild spoiler warning ahead.

It has been said before that Ubisoft animals are the worst. There have been several times when stealth missions in various Ubisoft games have gone astray because some wild animal decides to abandon whatever they are doing to attack my character in stealth mode, even if there are several viable prey options nearby. It’s impossible to be vegan when living in a Ubisoft game because the animals are all such jerks they would be eaten out of spite. There are some usual suspects in the animal to hate, such as snakes, and there are some less obvious offenders. And that would be the chicken. Chickens are no joke in Ubisoft games which we learned back during a village raid in Assassin’s Creed Odyssey where the ornery roosters were causing more problems to the spartan soldier than the armed bandits. 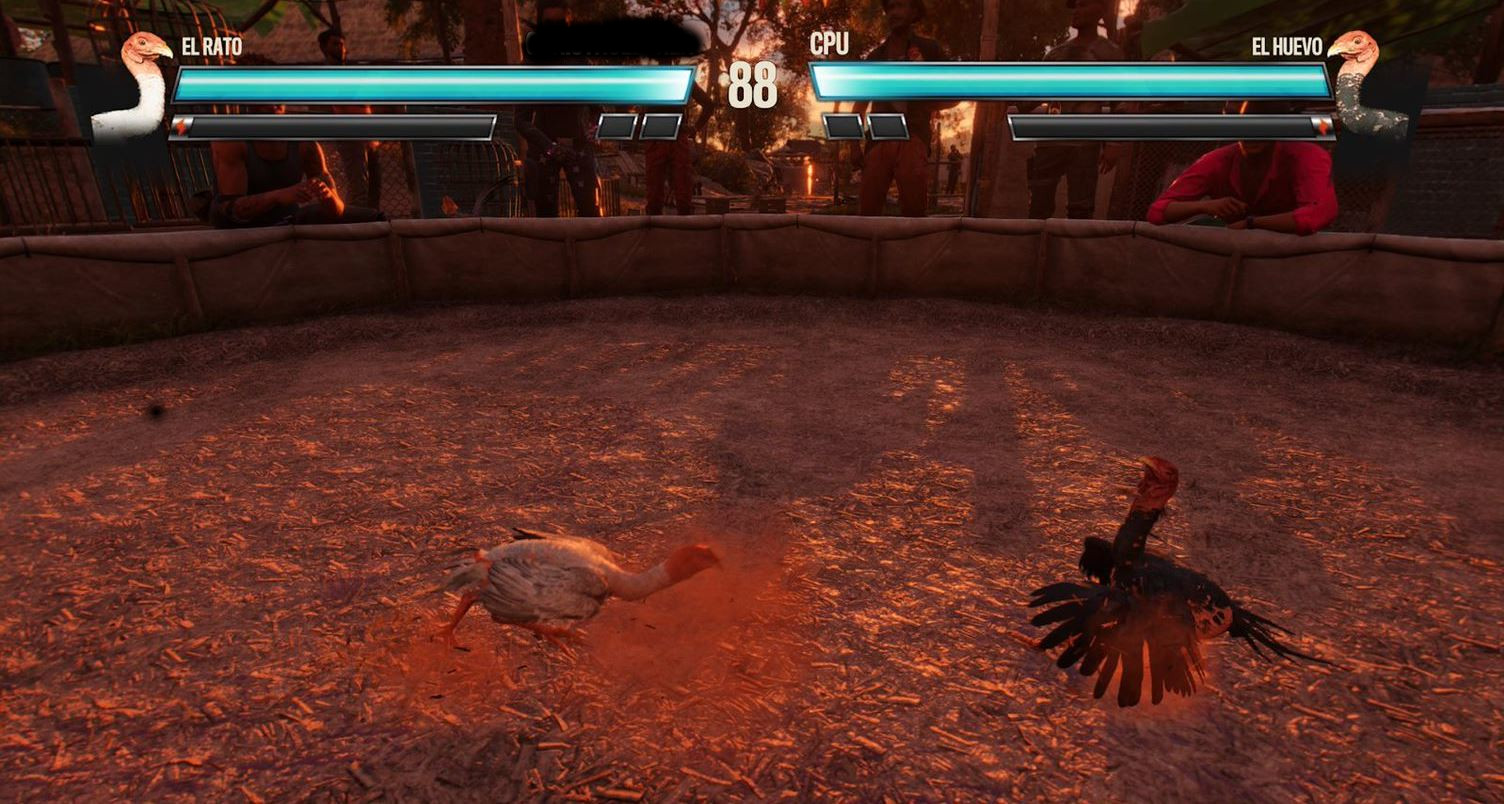 Far Cry 6 is developed and published by Ubisoft, and as such I went into the Yaran wildlands I was expecting unprovoked assaults from boars, coyotes and other animals. What wasn’t quite expected was Far Cry 6 would pay homage to Alfred Hitchcock’s classic film The Birds with actual fowl. There’s an optional mission that’s available early on that’s the stuff of nightmares. Dani agrees to help one of their fellow guerillas with the retrieval of an item for his prized rooster. This takes Dani to an area that’s creepy in its own right. It’s not entirely unlike finding the workshop and warehouse of Jame Gumb if he was into poultry instead of plus size women. After reaching the mission objective and deciding to leave is when the real horror begins. Like locusts swarming in the Book of Revelation giant aggressive roosters surround Dani. There’s no telling where they came from, and like the nine headed hydra no amount of firepower can quell the chicken engulfment. For every chicken that’s shot with the M-16 or flame broiled with the Tostador, two more of these monstrously foul fowls appear to peck out Dani’s eyes.

In relation to this quest there’s also a cockfighting minigame. The expected course of action for this article is to be taken in the moral outrage direction stating that having animals brutally kill each other for entertainment and gambling is wrong, but it’s a game. In real life it’s not socially acceptable to hire prostitutes and then kill them for a refund, but that’s what many players did in Grand Theft Auto III. Now this cockfighting game is hilarious. The character selection screen and match set up looks straight out of Street Fighter or Mortal Kombat. This could be dismissed as a silly gimmick, which under no uncertain terms it clearly is, but it’s actually fun. It’s actually one of the more fun ways to earn a few extra Yaran pesos. The controls are simple, quick attack, strong attack, jump attack and the super powerful attack when the charge meter is full. It’s not comparable to Guilty Gear Strive or any other contender for best fighter of 2021, but it’s still more fun than it has any business being. Plus with the multiplayer feature, this would be a good opportunity to do some cockfighting with your friends if you really want to cluck them up. 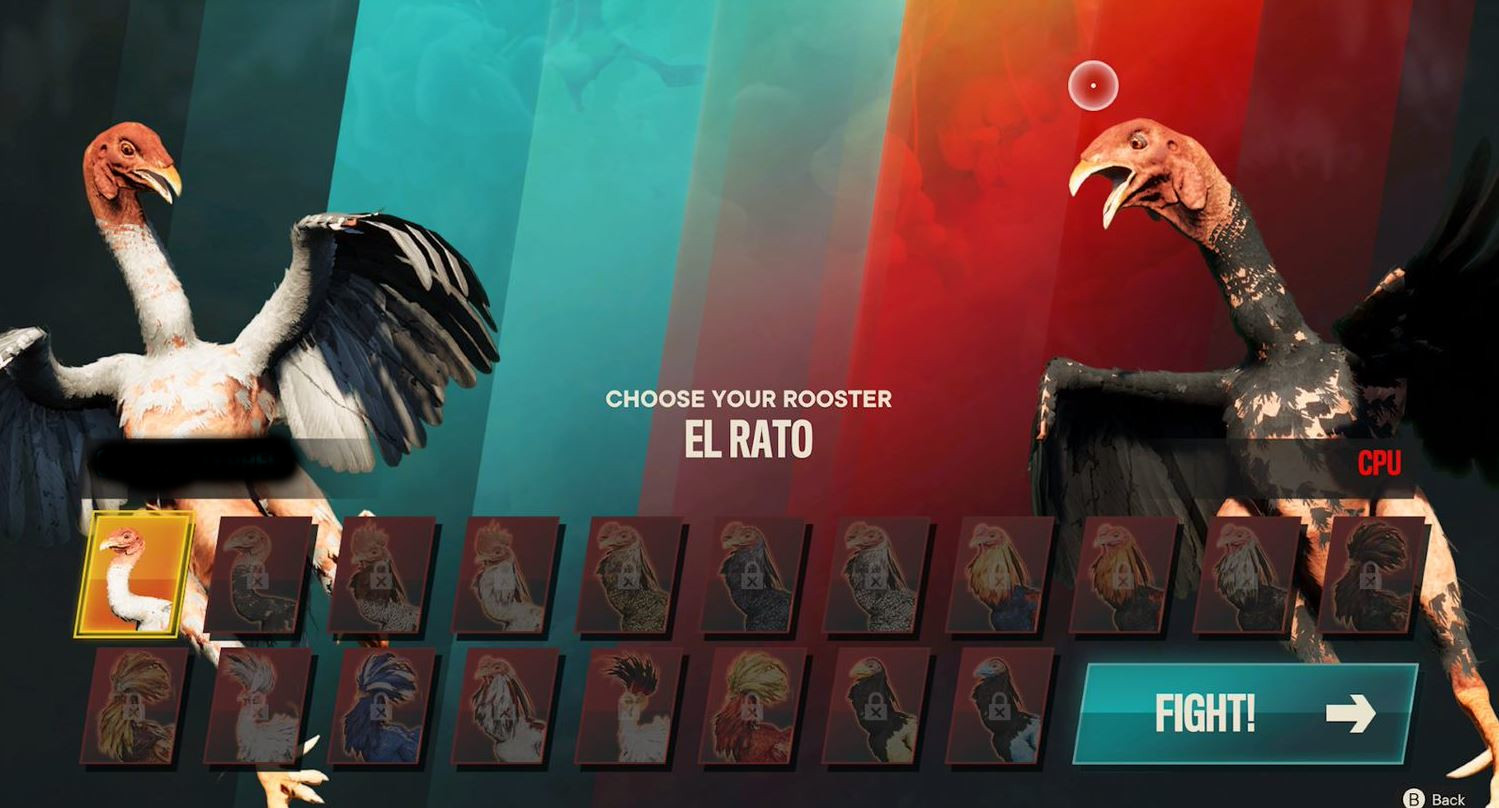 Far Cry 6 is enjoyable despite not doing much to further human/animal relationships within the Ubiverse. Anton Castillo is as diabolic as any great villain should be and his term as El Presidente showcases the nightmare that living under a fascist regime can be. Nevertheless, while it’s easy to concentrate on taking down Castillo and liberating Yara, Dani must also keep up her guard against the aggressive fauna that will attack Yarans long after it’s liberated. For more information that extends beyond fun with chickens, please check out our review.