It’s unlikely that even the most zealot of players could predict Crash Bandicoot’s return via the N. Sane Trilogy would be a runaway success. It’s doubtful even Activision would have believed that allowing both time and space for one of their beloved properties could result in a commercial and critical success. So much so to the point that even the most passive of discussion regarding sold-out stock and record-breaking sales is being associated with a remaster/remake of this ilk. Of course, outside of the fact the N. Sane Trilogy took a mere two days to become the biggest-selling release of June last year — not to mention one of Sony’s best first-week launches for a first-party IP and now one of the fastest-selling games in the UK as of late — perhaps the biggest talking point to take away from the experience has been the difficulty. More specifically, the unintended “challenge” permeating a large part of the original game, but more prominently, its two free DLC levels: Stormy Ascent and Future Tense.

The original Crash Bandicoot has understandably taken most of the trilogy’s hub of debate. I, along with a fair few other writers, mentioned it upon review and even went as far as to deem it one of the trilogy’s lower points. Difficulty and challenge is of course a subjective thing; what one might find an uphill struggle, another might deem it a cakewalk, but from brief glance, the consensus is in the camp of the first game standing out among the three releases, perhaps in ways that are not always beneficial. 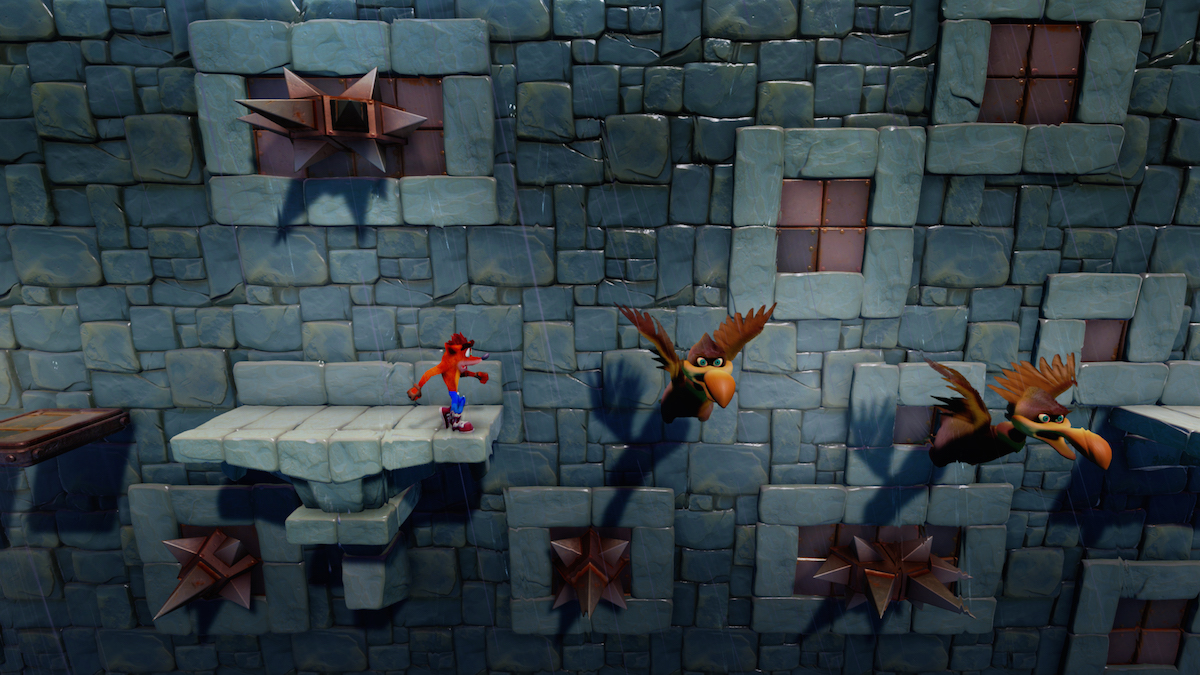 As if the original Crash Bandicoot wasn’t enough, Vicarious Visions just had to add to the discussion with what was then a surprising announcement that Stormy Ascent — a level previously cut by original developers Naughty Dog — would be included as a free download, having been bundled in with other iterations when Sony’s one-year exclusivity finally ended and players across Xbox, Switch & PC (be they newcomers to Crash’s antics or not) could now bear witness to not just one, but two tasking levels of pure, precision-based, platforming bliss.

Stormy Ascent follows in much the same vein as the original Crash Bandicoot’s uncanny restriction in space. Where later games would refine the design in places — with safe areas and the very means of movement expanded on — rarely was there an instance where players were hopping from one flying/floating/moving barely-big-enough-to-fit space to the next. Enemies would litter the paths in-between and there was a degree of risk involved, particularly when going for 100% (gaining an additional degree of temptation with Crash 3’s Time Trial mode now integrated across all three games), but for the most part, it was all about getting that crucial jump correct. Stormy Ascent, with the benefit of hindsight arguably, lends itself to later releases by factoring in this necessity to avoid perilous foes and get one’s timing correct…on top of circumnavigating each and everyone of its barely-sufficiently sized platforms. 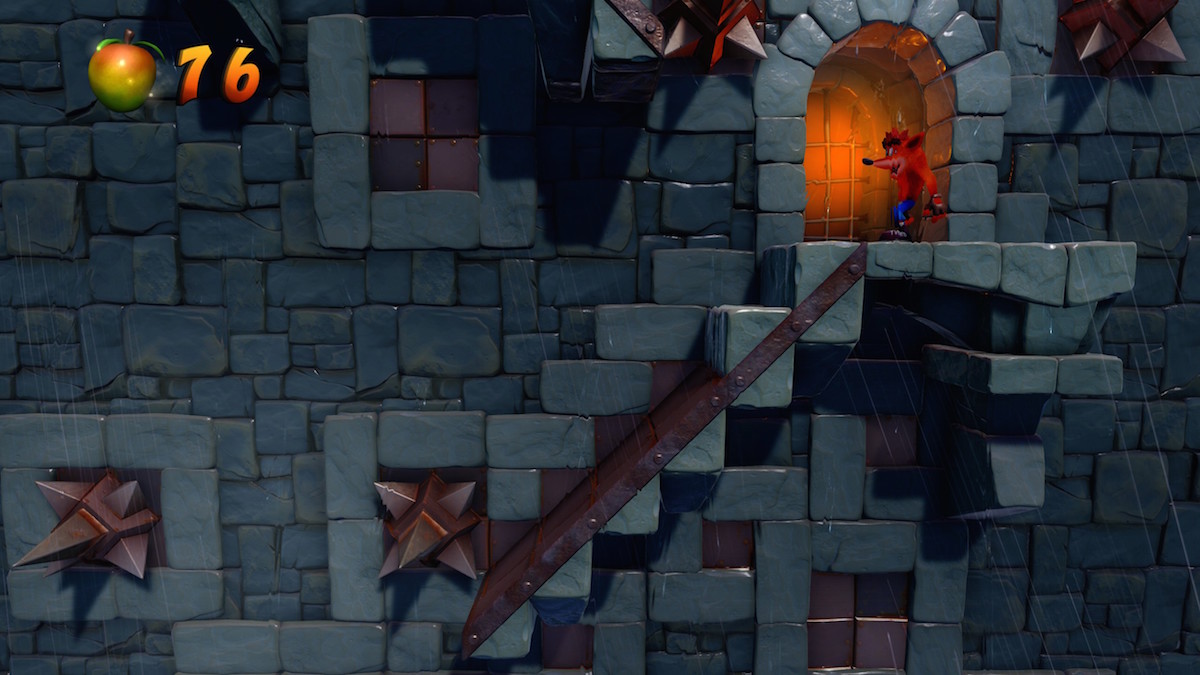 Add to this the retracting stairs, abundance of spikes, asynchronous-like flow of certain platforms and while Naughty Dog may have laid the foundation, it’s fortunate that Vicarious Vision sought it fit to bring back a level deemed too hard and out-of-place in what fans consider the most challenging entry of the original trilogy. Stormy Ascent if treated with all history displaced and as if it had been some penultimate climax in the 1996 original, it serves a great transition and springboard for the type of creative design that Crash 2 & Crash 3/Warped would be remembered for. But it doesn’t stop there, as Activision would go on to announce during this year’s E3. A tiny little microcosm of an unveiling, if you will; Future Tense would be the second free add-on level making its way into Warped. And above all else, there’s a reason why its designated level is indeed 31 out of a now grand total of 31 levels to be found in Crash’s third outing.

While it’s technically possible to complete the level (to survive the Time Trial ordeal too) upon first boot-up of the game, it’s advised that to have any chance of beating it 100%, you of course need to have acquired four of the five abilities unlocked after beating the game’s bosses. The emphasis on controls and making best use of Crash’s move-set isn’t the end of things though and it’s once more in large part thanks to clever design that makes Future Tense such a joy to play through. Many, many lost lives later. Naturally the level is predominantly 2.5D orientated for a majority of its run-time but even in its first section — the purely 3D sprint forth — Vicarious Vision manages to trip their players up. Platforms that need you nailing the time to jump perfectly; using hostile lasers to make it difficult to see a nearby crate and accompanying TNT; conveyor belts moving side-to-side as opposed to the usual back-and-forth. 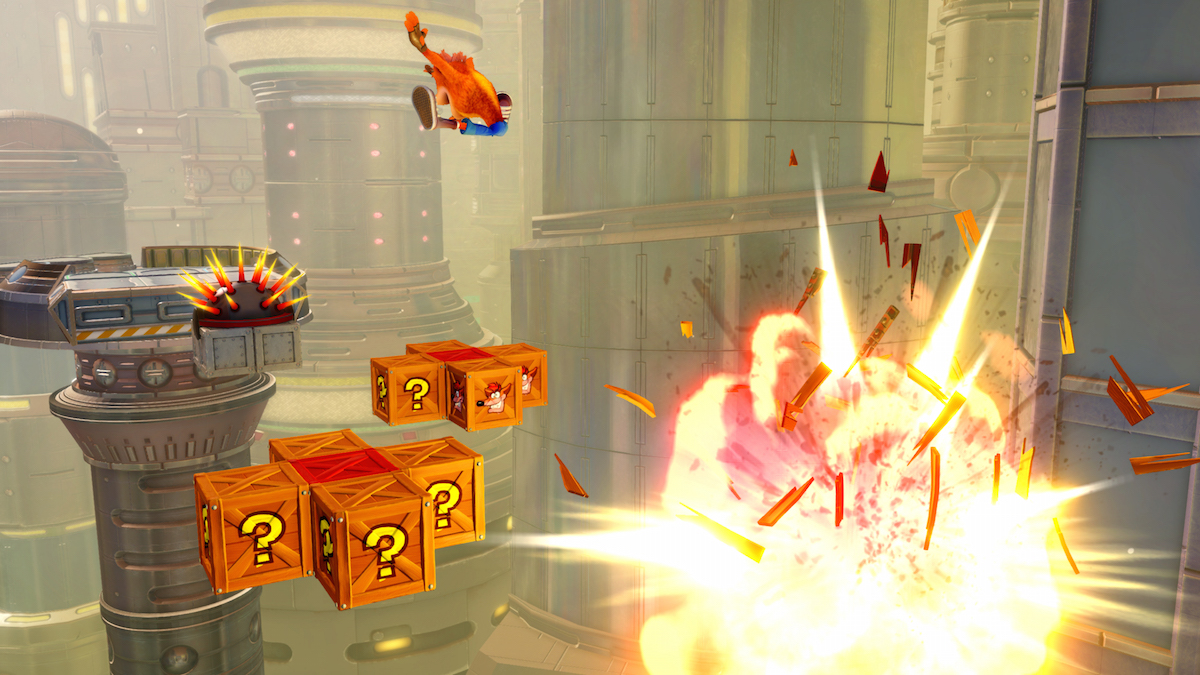 If we’re talking ingenious alluring of player deduction, however, look no further than a seemingly ordinary stack of boxes to spin away and/or body slam. For the sake of pre-warning, we will be veering technically into spoiler territory (odd as that may sound) here so feel free to skip to the next paragraph if you want to go in surprised and potentially frustrated at making the same mistake. Still here? Alright, so the beautiful ruse is that there’s a TNT box tucked away amid the bundle and yet, for those paying close attention — namely at the reflections beside you on the building — you’ll spot the TNT before a life is so carelessly lost. I must concede that I fell for the developer’s trap here and I don’t even have the excuse to say I was playing it for the first time on the Switch — there are no reflections in that version, amid the many technical/graphical limitations present.

Future Tense, of which the aforementioned ruse is a part of, comes by way of the level deviating at points, the option to detour above or below if one desires. Likely a reason to test a player’s resilience and hunger for that illusive gem, but could also be seen as Vicarious’ confidence in their players’ knowledge of the series tucking secrets in and around what seems like another commonplace route from A to B. They could have lobbed each and everyone of these ideas within the main route — and there are some comically-dubious efforts to make a fool of the player — but it’s commendable, even in something as meager as a solitary level (a DLC one at that) for a developer to trust us to discover these tricks and challenges for ourselves. Even if the reward isn’t always indulgent or simply just in balance, Future Tense feels like a more tightly-compact accumulation of all of Crash Bandicoot’s dastardliness as a platformer, but it doesn’t feel like it’s making its players jump through so many hoops. Unless you want to. 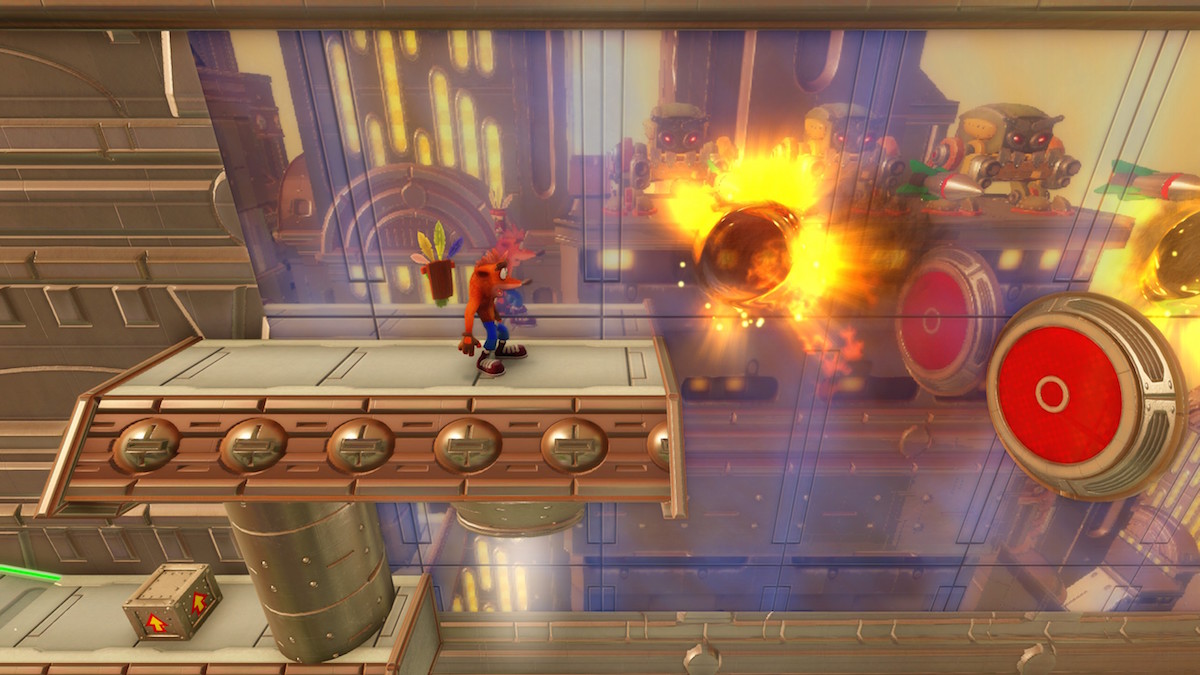 Naturally, as we’ve seen with games like Yooka-Laylee, platformers continue to receive additional favor when accompanied by nostalgia. There will be those who don’t see the appeal in the genre and Crash’s precision-based, linear progression through an assortment of specifically-themed worlds and levels, but for those who do, it’s clear the N. Sane Trilogy hasn’t lost any of its pull as a trilogy whose charm and thoughtful design sits neatly alongside its demanding level of challenge. Stormy Ascent and Future Tense — two once-forgotten additions — are perfect personifications of a balance in mechanics and delivery. Of gameplay controls and visual presentation, the few added twists and turns only furthers the notion Vicarious Visions have done a great job instilling a sense of pride in what the Crash series established: good old-fashioned platforming. And safe to say these two little bursts of add-on content have done their job to perfection.