In 1998 adventure games were all but done for. That was the year LucasArts released Grim Fandango. Those who played the game were blown away by its high production values, clever writing, and great puzzle design. Unfortunately, not many actually played it. Still, diehard have fans kept their love for Grim Fandango alive and will often lament how hard it is to get the game running on modern computers (let alone find a copy). Recently Double Fine Productions acquired the rights to the game and set to work updating it for modern systems. Unfortunately, this “Remastered” version is anything but.

Sure, the character models look smoother and fit into the prerendered environments better thanks to dynamic lighting. And sure, there are new control schemes for modern players and commentary tracks to appease old-school fans. Unfortunately this all feels incredibly shallow when we’re talking about one of the best adventure games of all time. Some folks may be astonished by the gorgeous visual design of the prerendered backdrops, but those are entirely unaltered. They still look gorgeous, but next to the vastly improved backdrops of Resident Evil HD they feel like a letdown. Double Fine didn’t even bother to update the archaic save system with autosaves. 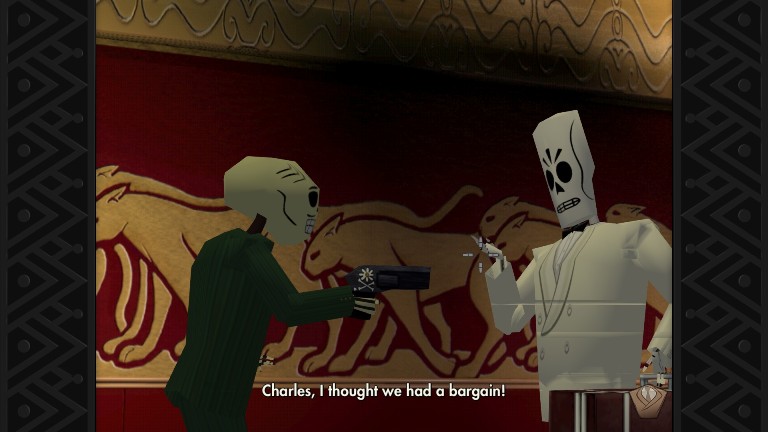 Even though the characters look a lot better, it seems the remastering treatment has caused some issues. Occasionally facial animations can bug out, while at other times the characters themselves may flicker in and out of existence while interacting with objects. When they don’t disappear completely, they’re occasionally obscured by inexplicable horizontal lines. But even though it’s not a glitch, the worst problem with Grim Fandango Remastered’s visuals is the so-called “widescreen” mode, achieved by stretching the 4:3 screen in an unseemly manner

You can sidestep those problems by running in 4:3 with original graphics, which will give you an authentic (if not particularly “remastered” experience). But really, the bugs you can see are just the tip of the iceberg. The game’s Steam Board is overflowing with complaints. Perhaps much of this has to do with the game’s original GrimE engine, which doesn’t exactly play nice with computers released in the new millennium. Whatever the case may be, the development team shouldn’t have shipped before the game was fully functional. A buggy, unfinished release defeats the entire purpose of remastering. 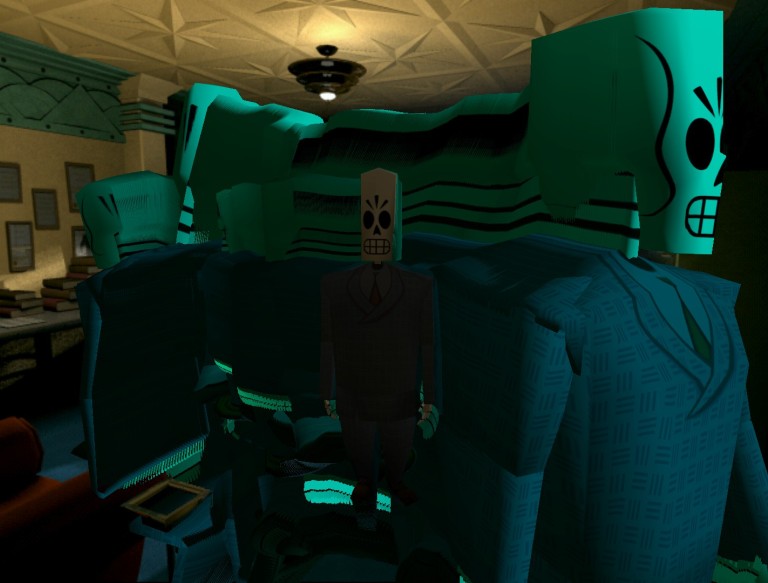 During my own playthrough the game stuttered, broke, and even froze on me. On three occasions puzzles suddenly became unsolvable because an action wouldn’t trigger, or a necessary item vanished. In one instance this couldn’t be fixed by reloading and I had to copy someone else’s save. Players should never have to do anything like that just to proceed through a game. It’s even worse in adventure titles because it can be hard to tell if the game is broken or you’ve just missed a clue somewhere. Talk about frustrating! At least I didn’t have to deal with the worst errors I’ve heard about.

Between all the game-breaking problems I honestly considered giving up on Grim Fandango. No game should make its players work so hard against it just to see it through to the end. Ultimately I found the core game to be so good that it was worth dealing with everything along the way, but this is disgraceful for what’s supposed to be the definitive version of the game. This also marks the first chance many will have to play it, and it’s doubtful that many of them will be able to see past the bugs in the first place. This is a total shame. Double Fine Productions needs to fix their mess, and they need to do it now. Grim Fandango deserves better.