Editor’s note: this article includes story spoilers from The Awesome Adventures of Captain Spirit and Life Is Strange.

The father-son, father-daughter relationships are angles that most developers will not pass up the opportunity to explore in a story. Whether it’s depicted positively or negatively, it has retained its value as a reoccurring theme in gaming over the past decade (and will do beyond it, too). Santa Monica Studio received widespread acclaim — and deservedly so — for its potent storytelling in God of War, while Quantic Dream had to fend off fierce criticism directed towards its ‘controversial’ representation of domestic abuse between father and daughter in Detroit: Become Human. In fact, one of Detroit’s stars, Bryan Dechart, came out to publicly back and defend the French studio from the criticisms it initially received. Of course, it’s natural for a hot-topic issue to become the talking point of the gaming industry, drawing discussions from both sides on how a divisive topic is depicted and to what end a developer wanted to integrate it into their story.

Most developers have not hesitated to approach — and tackle — divisive themes in gaming (and rightfully so). Dontnod Entertainment did it once before with the critically acclaimed Life Is Strange, delving into themes of sexual abuse, bullying and drugs, to name a few. Life Is Strange was successful with its messages, too, receiving praise from critics and fans for its commentary on real-life issues. It will hardly come as a surprise that the Life Is Strange developer has taken a similar approach with the recently released The Awesome Adventures of Captain Spirit. Unlike the fully fledged experience of Life Is Strange, which spotlighted issues in five individual episodes or overlapped them with one another, Captain Spirit has limited scope due to its short, focused story-driven experience. Dontnod does turn its full, undivided attention to the father-son dynamic and embeds it at the center of Captain Spirit’s story, focusing on some themes that aren’t too far away from the ones that Quantic Dream faced backlash for in Detroit. Dontnod, however, proves that its underlining message and execution of sensitive topics is what sets the two French studios apart. 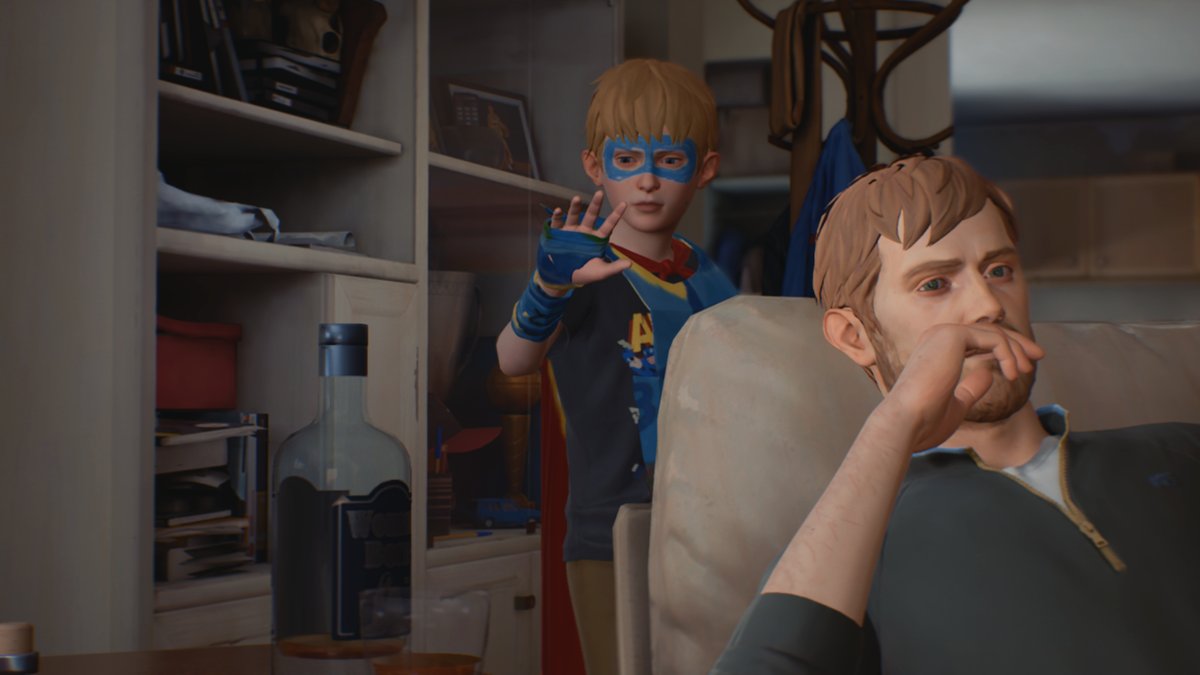 Captain Spirit using his powers against his dad’s whiskey bottle.

The Start of an Awesome (Sort of) Adventure

Set in the same universe as Life Is Strange, Captain Spirit takes place three years after the events of the episodic title in a new location of Beaver Creek, Oregon. Players step into the shoes of Chris Eriksen, who has his own alter ego, Captain Spirit. Both Chris and his father, Charles, live together in a period of uncertainty after the tragedy that hit their family: the death of Chris’ mother, Emily. Just as Rachel Amber was central to the story of Life Is Strange without making a physical appearance, Dontnod once again utilizes that same approach with Emily in Captain Spirit. It works. Actually, it would be an understatement not to praise Dontnod for revisiting its brilliant formula from Life Is Strange and demonstrating how well it has aged in Captain Spirit. It effortlessly sets up this father-son story to unfold, as well as creating a real interest into the character of Emily through the different items that players will stumble across at the Eriksen household (sound familiar?).

Depending on how players approach their initial playthrough, they will see Chris and Charles interact in different ways. In most cases, it will become apparent that the father-son relationship is fragile. In fact, it begins to disintegrate each time Charles shouts to Chris while players are exploring his bedroom. His anger builds every time he asks Chris to come for breakfast — like most parents do with their kids — culminating to the point where players will be unable to interact with anything in the room. It is Dontnod’s finest moment, especially when the replay value of Captain Spirit shows a slightly different side if players leave the room straight away. But it’s also Dontnod experimenting with its established formula, considering Life Is Strange offered complete freedom to explore unless the next segment of a quest had been triggered. Here, Dontnod takes that freedom away within Captain Spirit’s opening minutes. Charles loses his temper with Chris and, as a child summoned to face the wrath of their father, players must comply with his demand and head for breakfast. 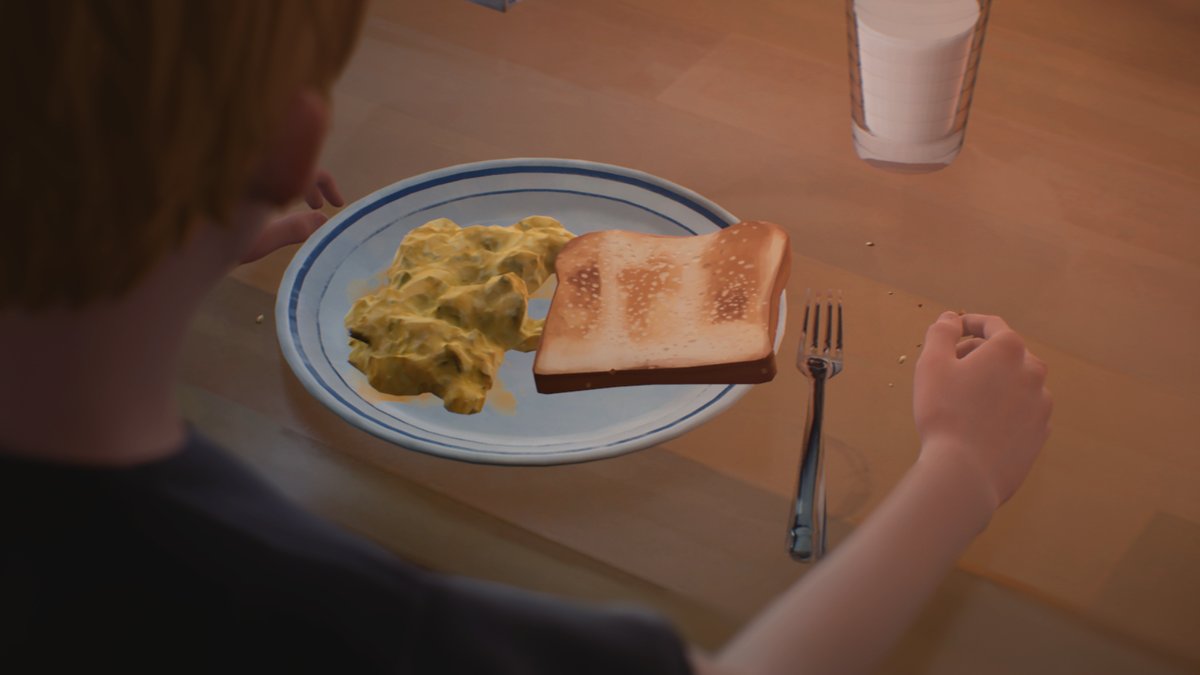 Charles makes Chris his breakfast in Captain Spirit. But let’s face it: not everyone can cook a mean breakfast like Joyce Price.

Captain Spirit always retains the father-son relationship as an important focus of the story, showing on various occasions how Chris and Charles are affected by the death of Emily. Chris has lost an influential figure in his life and turns to his father for solace and filling that void only a parent can leave. Meanwhile, Charles’ personal and professional life crumbles and he struggles to deal with the extra support his son needs. It’s the manner in which Dontnod handles these themes that add to its powerful storytelling. Charles turns to alcohol to drown his sorrows, with Chris’ child-like mentality not understanding why his dad is drinking and why he would do it when it “just makes him mad?” Players will be able to piece together Charles’ other problems throughout their adventure, discovering how he had been fired in the past, why the Eriksen family had to move and dealing with Chris’ antics from school. Sympathy can be felt on both sides, with Dontnod painting these issues in the context of an average Joe having their life turned upside down and a child that has lost their mother.

Dontnod does turn its full, undivided attention to the father-son dynamic and embeds it at the center of Captain Spirit’s story, focusing on some themes that aren’t too far away from the ones that Quantic Dream faced backlash for in Detroit.

What does strike out (no pun intended) is when the bruise on Chris’ arm comes into the frame of the screen. In most cases, it can be missed beforehand unless players are really looking at Chris’ arm. From the moment it takes center stage during Chris and Charles’ exchange at the breakfast table, it highlights how often abuse can be overlooked unless it’s actually seen or spoken about. It’s important to establish that Dontnod doesn’t specifically imply that Charles did it, but considering he’s drinking alcohol at breakfast and overindulging on it, it’s more on the fact that it has happened and he might not even remember that he was responsible for it. The camera lingers on Chris’ arm ever so slightly, switching to Charles to show the remorse on his face. It’s slow and meaningful, with a real-world issue not being overdramatized or simply progressing the main narrative forward. While Detroit had domestic violence at the heart of its Paris Games Week trailer in 2017, there’s simply no real comparison here. Dontnod’s subtle approach beautifully encapsulated its message without ever tainting its meaning through the way in which it’s utilized in the story. 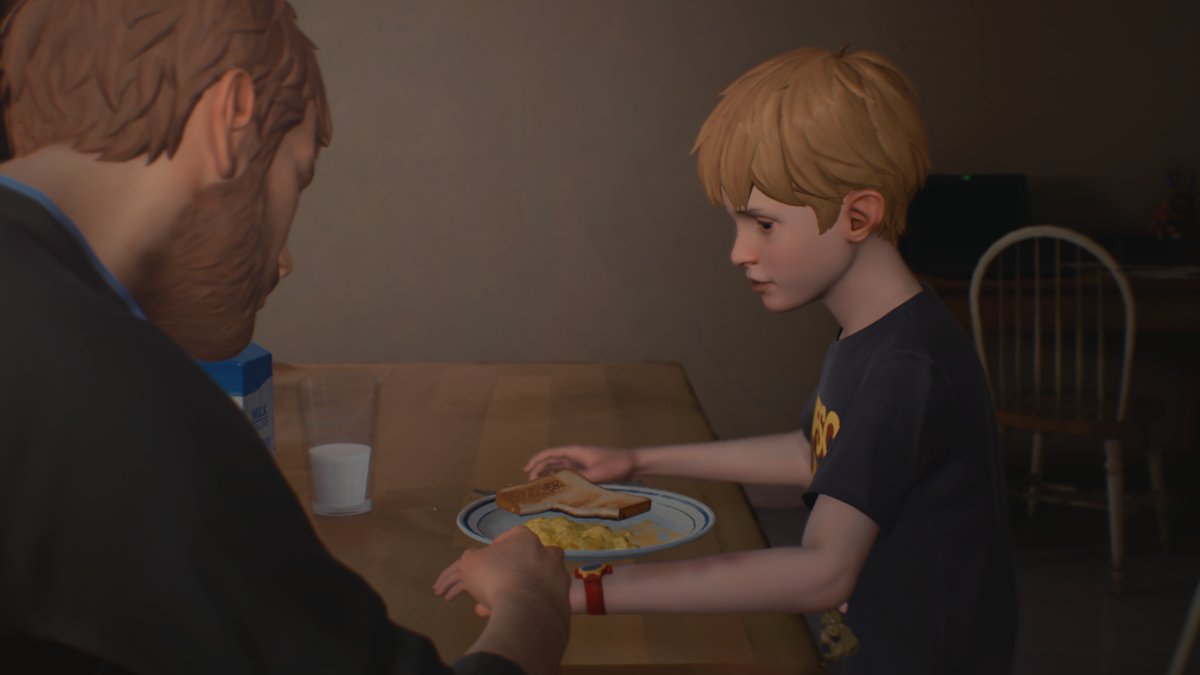 Charles talks to Chris about the bruise mark on his arm.

Just before Dontnod prepared for the release of the fifth and final episode of Life Is Strange in 2015, Hardcore Gamer had a rare opportunity to speak with Hannah Telle, who provided the voice for lead protagonist Max Caulfield. Given Life Is Strange’s growing popularity at the time and its commentary on different topics, we were eager to find out how Hannah felt about Dontnod’s approach and execution of various topics in the first four episodes. “I think Dontnod is doing an outstanding job,” she said. “The more awareness of these issues that are raised, the less alone the victims feel. Sometimes shifting your perspective from isolation can make all the difference. Not only does the game present real problems, but it also uses Max to maneuver the player through making decisions themselves on how they feel towards these topics.” Even now, Captain Spirit mimics how Hannah described Life Is Strange’s way of dealing with these issues. As Chris, players are in control of how they feel towards an issue that is presented in the story. When Chris is asked about the bruise on his arm, players can put forward his pain — and the one that they feel psychologically when they first see it — or they can simply say that it doesn’t hurt.

His anger builds every time he asks Chris to come for breakfast — like most parents do with their kids — culminating to the point where players will be unable to interact with anything in the room. It is Dontnod’s finest moment, especially when the replay value of Captain Spirit shows a slightly different side if players leave the room straight away.

Captain Spirit was released for PlayStation 4, Xbox One and PC. For more on Captain Spirit, check out Hardcore Gamer’s review.