I recently stumbled upon a comical macro the other day in preparation for this piece, which I think perfectly encapsulates my feelings for writing this. It’s two halves of two different though brief Yakuza gameplay clips. On one side, the caption: “new fans playing Yakuza” with footage restricted to just the traditional beat ’em up combat, barely scraping by. And on the other: the caption “veterans playing Yakuza.” Complimented by a sped-up compilation of long-time protagonist Kiryu indulging in some of the series’ delectable array of mini-games, photo opportunities and downright left-field — in a series beloved for its left-field detours to side content — turns you can waste countless hours on. The intention behind this macro, I assume, isn’t to discount the many successes the series has achieved, with its splendor of main stories that are full to the brim with great writing and even-greater (albeit ridiculously over-the-top) set-pieces. But rather, it’s another remarking on how playing through any Yakuza, or in this case series-affiliated, release is as much about seeing what’s on offer away from the main campaign as it is about getting through the ample number of combat encounters. 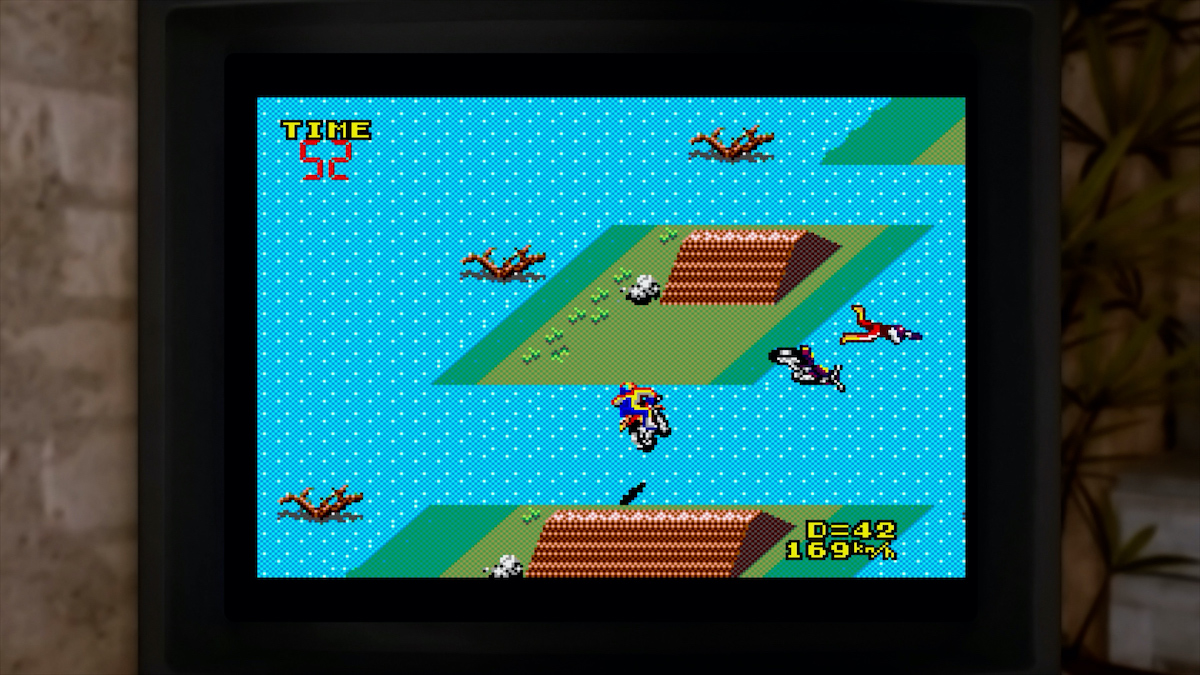 Again and again, developer Ryu Ga Gotoku Studio prove that as much as they so clearly put a ton of time and effort into making the main story as compelling and as entertaining as it can be, but as if itself has become a staple alongside, the extent and depth to which secondary content is explored, is admirable in its own right. And while it may not be entirely original technically-speaking, perhaps the most curious offering to warrant investigation is no doubt what emulated games from Sega’s past will pop up during the in-world renditions of the company’s real-life Arcades. Or as it turns out with this year’s Lost Judgment, what cartridges we can hope to find/buy so as to play them on main protagonist Yagami’s Master System console back at his Kamurocho office. In place of the trustee pinball machine from 2019’s release, Lost Judgment this time finds itself indulging on not one, but two sectors of the Sega archive. In the case of Sega’s supposed competitor to the Nintendo Entertainment System, it’s an area with admittedly little personal knowledge on the matter.

But while there may be repeat showings this year on the accompanying Arcade side of things — though that’s not to say playing a few rounds of Space Harrier now and again isn’t inherently a mark against — perhaps one of the most notable take-aways from the developer’s choice of selection this year, is just how insightful and deservedly so the selection this time is. At a time where you would think the well of emulations at disposal surely must be running dry (where copy-pasting the same examples from previous entries is surely inevitable), it’s surprising to find that’s still not the case. More surprising that even after learning of the selection prior to release — uttering that same bewildered “hang on…Sonic had a fighting game of all things?!” response I’m sure I’m not alone on — there’s genuinely intriguing experiences to ponder over. To ponder at how ridiculous the premise is and so too that there’s some fascinating mechanical nuance behind some of them. Because the overall quality or end conclusion of these titles isn’t the focus here, but rather that there are some interesting ideas buried amidst oddities. 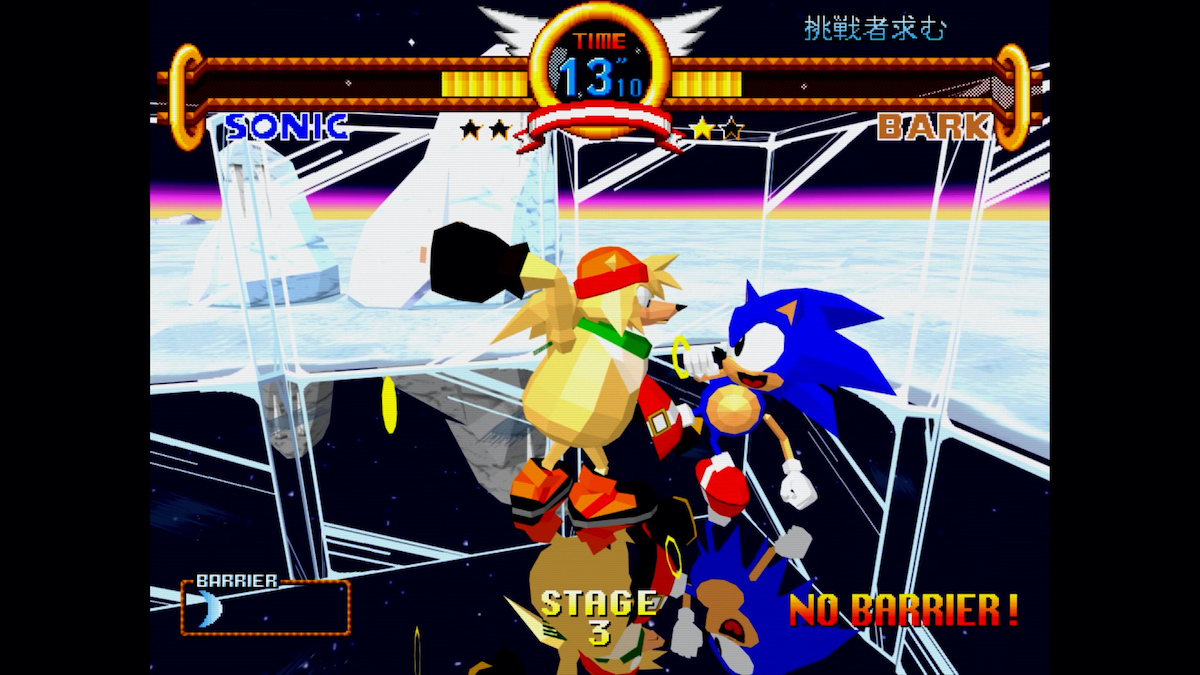 That’s actually a good place to start: Sonic the Fighters. The one game I was, albeit ironically so, compelled to check out to the point it hadn’t even past an hour into Lost Judgment’s main story that I sprinted to the in-world Arcade setting to try it out. An arena-style fighter a kin to your Tekkens or your Dead or Alives. A cast of Sonic characters recognizable and adorned by easily the most glaring use of jagged polygons to render characters in 3D. The kind of jaggedness that would make even the harshest of N64 games look softened by comparison. A fighting game that, were I to review it today, would be marked down by stiff and unresponsive controls, as well as an odd curvature in difficulty balancing in your attempts to make your way through each Sonic-series character. And yet, for all its anti-Sonic tradition, I’d be lying if I said there isn’t something to this. More so than fellow spin-offs Sonic R or Mean Bean Machine, at the very least. The tactical use of barriers and when to dish out certain button combos for particular fighters. The most easy-on-the-eye fighter it may not be (miles away from being considered a smart, non-mainline effort), but mechanically-nuanced enough? Definitely.

Then there are other Arcade outings that are more aesthetically pleasing, or at least pleasing in the sense it evokes a comical nostalgia. Nostalgia for the time spent as a kid in various arcade settings. Wasting precious coins after coins on games/machines with horribly-muffled sound (in a setting where just hearing what was going on, was as much an accomplishment) that most predominantly centered around racing to the finish while making sure to keep that timer from reaching zero. Maybe it’s my own love for futuristic racers, or generally racing games that don’t prescribe to the standard of present-day “real world” simulation, but Motor Raid is another instance where middling overall execution is salvaged by a canny presentation. Even if the word “canny” is being used extremely charitably to substitute said stretches and stretches of simplified geometry and blurred textures. But again, there’s an attraction to be felt in going again and again — trying to use the on-bike melee combat to knock as many competing AI off their own bikes. To enact revenge on that one character who got one over you — stealing your own weapon in the process — and returning the favor in little time. 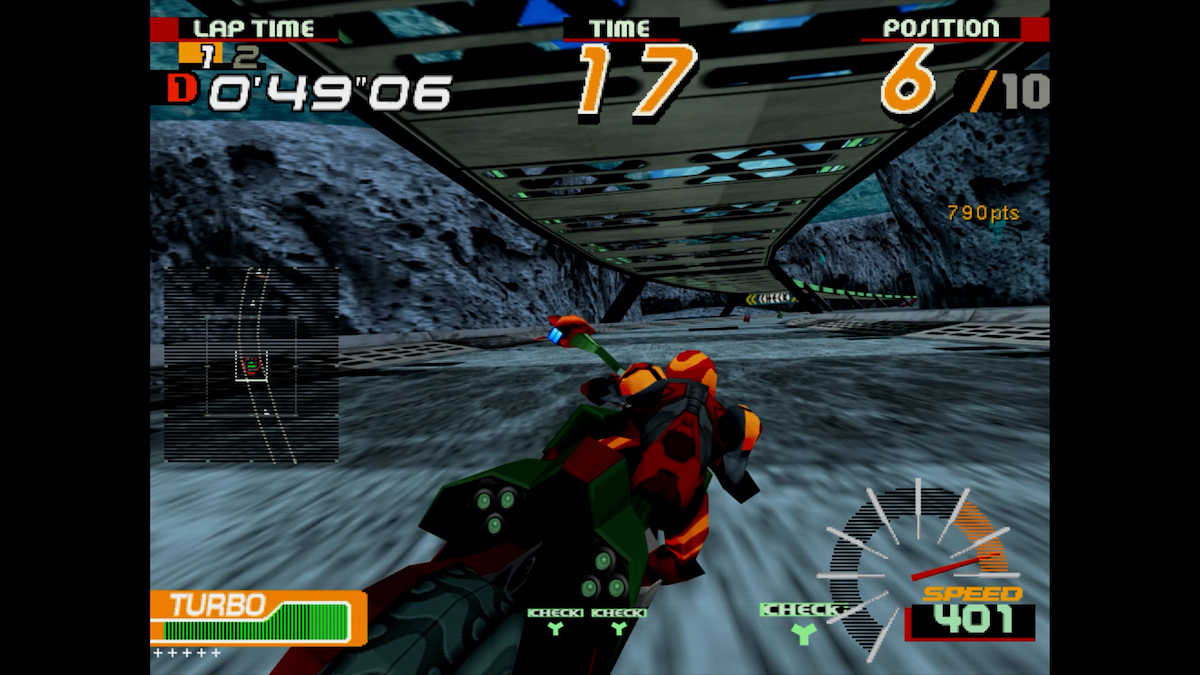 Then there is the Master System collection; at an early and potentially-dismissive glance, IPs that at best could only reach for cult status for a time. But delving deeper reveals a plethora of games that feel more so like genuine attempts from Sega to one-up the established circle of Japanese studios at the time. None more prominent — and competitive — than Nintendo. And in some spots, a great reference points for chronicling Sega’s investment in racing titles during the mid-1980s. Super Hang-On, one of two motorcycle-oriented racers shares much of its DNA with the succeeding (and arguably more highly-lauded) OutRun, itself releasing mere months afterwards. Super Hang-On, as easy to get under your skin it is with its unpredictable corners and equally-unpredictable stirring of competitor cyclists, doesn’t hold as much the same gravitas as Sega’s car racing follow-up. Its slightly more punishing time requirements and somewhat limited color palette are factors OutRun would later lavish in, with its vibrant care-free aesthetic and easier (though not by much) accessibility in triumphing over.

But of course Sega back then weren’t fit with just building on their own foundation. Screen-scrolling shm’up Fantasy Zone, stand-alone offers a window into an idea that most modern-day roguelites can’t help but indulge over. That being the concept of spending earnings on higher-powered upgrades and abilities alike mid-way through a run. But relevant to the time itself, it was Sega’s answer to Konami’s own venture away from shm’up’s aesthetic primarily being that of the black of space between advanced ships and menacing alien forces. And while Fantasy Zone may have won the battle of the “cute ’em up” shooter on the replayability of its gameplay, as Konami’s recent Arcade Classics anthology has shown, the studio’s TwinBee of 1985 was just one step in a claim for the last laugh and the eventual victory in the “war” for the best that the genre could bring. A entry that, directly or not, spurred Konami to grander creativity and refinement alike. A success that would lead to the eventual development and realization of arguably one of Konami’s — and the entire genre’s —  peaks as a game developer: Gradius II. 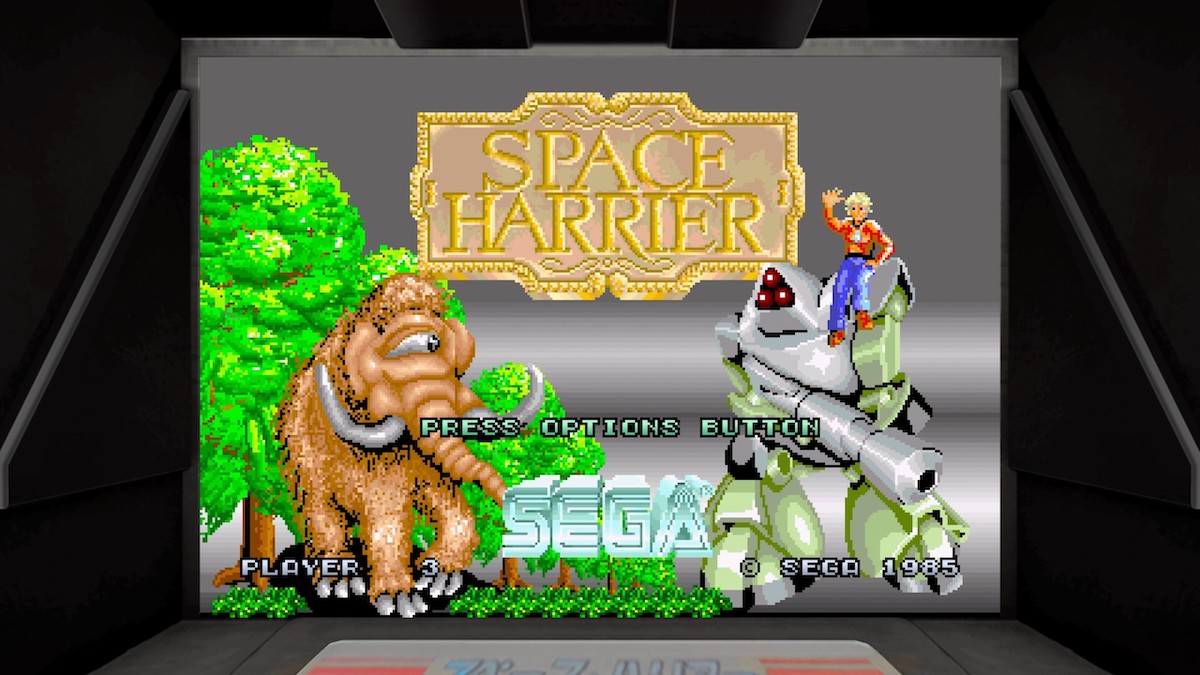 Not all of the Master System offerings are as celebratory or as fun to return to. 1987’s Woody Pop, a blatant jumping aboard the Arkanoid craze at the time. The latter, itself, an attempt (and successful one at that) by Taito to build on the foundation of Atari’s Breakout template. Unfortunately, Sega’s own “paddle and ball” effort doesn’t hit the mark. The game has a weird interpretation on the relevancy of power-ups (if one can even deem them power-ups in the sense that they’re meant to help you) and the less said about its emulation handling the input of a controller, the better. If there exists such examples as bad interpretations of Tetris — as simple-but-timeless that brand’s core loop is — the same very much applies to something like Breakout and its off-spring. But admittedly this is a deliberate picking out on my part of some of the less-appealing emulations of the Master System in Lost Judgment.

That’s not to say that others are somehow fluidly enjoyable to control by comparison, but the promise of evolution does at least balance out some of the convolution such ideas imposed. The isometric-laden tension of Enduro Racer is a much more enticing prospect than ExciteBike‘s 2D delivery, but once you get to having to leap across water does the reliance on blind luck reveal itself. Alex Kidd in Miracle World, releasing just over a year after Nintendo put out a certain plumber’s foray into 2D, 8-bit platforming, should in theory be an undisputed leap above one of the NES system’s and the entire video game industry’s most iconic releases. Its mix of scrolling directions and brighter art-style should guarantee it the title of superior platformer, but again the game’s handling of movement itself is one crease too many. Commendable an effort it is in standing up to Nintendo’s behemoth of a title at the time. 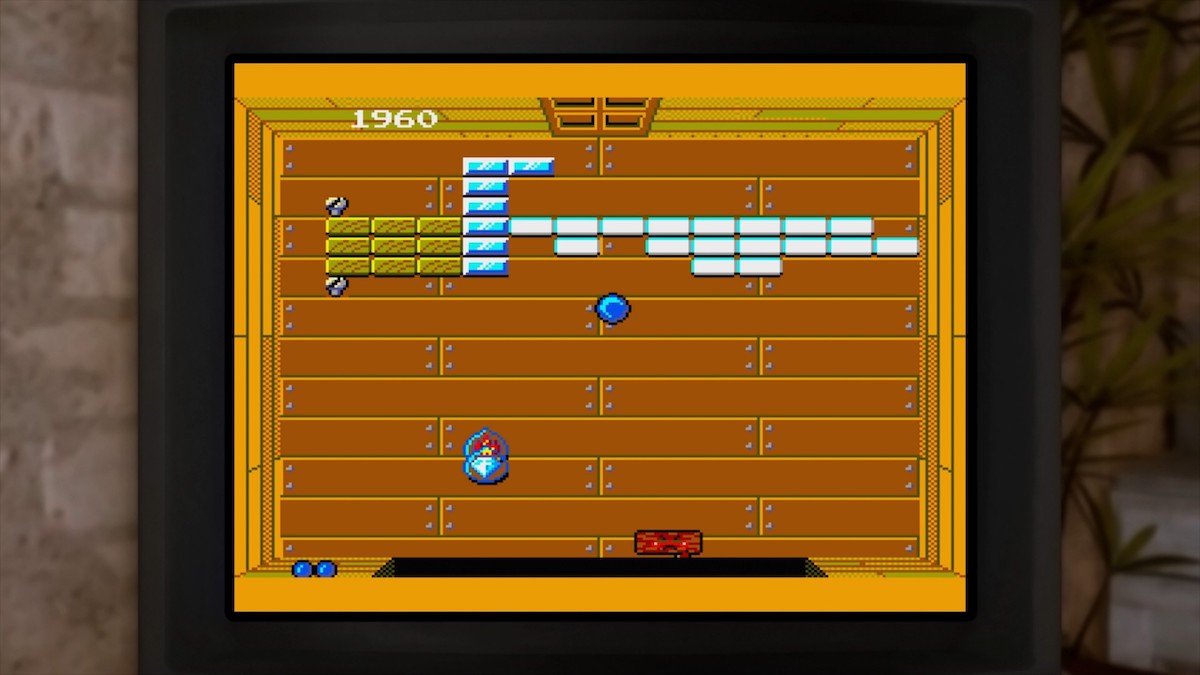 But is this not such a perfect encapsulation of one of Yakuza and Ryu Ga Gotoku’s lesser-spoken but equally-praised traits as a studio? To delve once more into the trove of Sega-affiliated releases — regardless of end quality or indeed relevance in the grand scheme of things. To have people like myself discuss them to such lengths. Where past entries in the series may have been seen as more a prioritizing on variety more than anything, this year’s offerings in Lost Judgment feel even more like an insightful reflection on Sega, as a company, in all their multitudes of building upon, competing with or simply chasing trends so as to stand out from the crowd. On both fronts — the realm of Arcade cabinets and home 80s consoles alike — it’s clear that Sega will remain, in retrospect, a key and crucial component in the evolution of video games in Japan throughout the 1980s. Games that, at their best, four decades on are still as intriguing to return to. And even when at their figurative “worst,” still stand as a notable reference to the company’s former competitiveness as both hardware and software pioneers. A well-warranted distraction this year and bound to only pile on the gladly-wasted hours atop Lost Judgment‘s main campaign.