As we enter the second week and the second quarter of Hearthstone‘s Curse of Naxxramas expansion, we’re already beginning to see significant changes in how the game is played. There are the obvious shifts as Hearthstone gains its first substantial single-player content. Each boss in the adventure presents players with a unique challenge, and while the standard fights are really just a fun little grind for new cards, the heroic bosses will really test your mettle. You need to build unique decks to solve each encounter, and they create situations where typically “bad” cards are incredible.

But it’s not just the single player that’s changed. Whenever new cards are introduced to a CCG, the meta game changes substantially, and Naxxramas is already making waves when it comes to the decks you’ll see on ladder. Thus far we only have access to twelve cards out of the thirty that will be available, but many of them are game-changers. Interestingly, week 1 and week 2 mirror each other in terms of card utility. 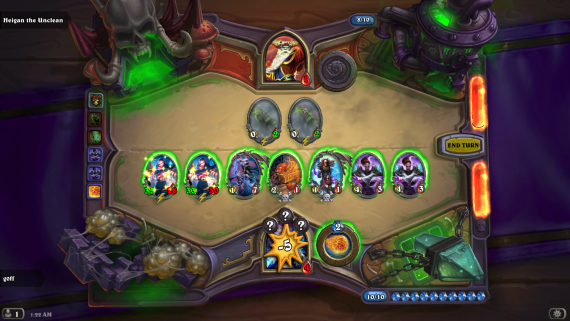 The arachnid quarter’s big boss Maexxna is a somewhat sub-par legendary (though it has its uses in control decks) but the three smaller spiders are all quite strong. Haunted Spider’s ability to swarm the board has earned it a spot in a number of Zoo decks (Warlock decks that use low-cost minions to maintain board control), while the Nerubian Egg’s intimidating Deathrattle allows most aggro decks to dissuade AOE spells. On the other hand, the Nerub’ar Weblord provides an excellent answer to early-game aggression, slowing decks that rely on powerful Battlecry minions – zoo included.

Meanwhile, the smaller minions of the undead quarter are a little too specialized to make a meaningful shift in the metagame. The two deathrattle taunts, Sludge Belcher and Unstable Ghoul, have pretty awful stats considering their place on the mana curve, and their special abilities don’t really make up for it. 1 damage AOE is more or less useless, and spending an extra mana to summon Goldshire Footman is a waste of a Sen’jin Shieldmasta. Stoneskin Gargoyle’s self-healing ability makes it an excellent target for buffs, but buff abilities are inherently inconsistent, and on its own it’s little more than a nuisance. 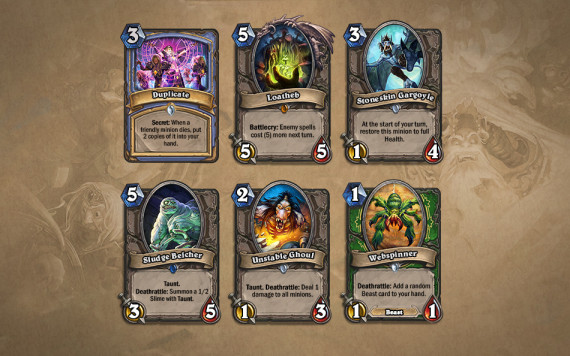 But then you have Loatheb, the legendary so legendary that he gets his own paragraph. Loatheb can utterly paralyze certain decks for a turn by increasing the cost of their spells the turn after he’s summoned by 5. The obvious thought was that this would be an excellent counter to Miracle Rogue’s turn 5 cheese play of Gadgetzen Auctioneer into Preparation into Conceal (which cycles two cards and sets up effectively infinite draws the next turn). While he certainly shuts this play down, Loatheb actually does more to help rogues than hurt them. His 5/5 body lets him do some serious damage the turn after he’s summoned, and his effect more or less ensures that he’ll stick around against an empty board. Instead of using Shadowstep to hit multiple times with Leeroy Jenkins, rogues can now stall their opponents for three turns with Loatheb, all while expanding their board presence.

As a Miracle Rogue player this combo potential excites me, but I also worry that it could be toxic for the overall Hearthstone meta. While most decks for most classes use many of the same class cards (every smart Warlock uses Soulfire, for instance), Hearthstone doesn’t really have any neutral “staples” – cards that you basically need to include in every deck. Sure, there are some GREAT neutral minions, but whether you use Knife Juggler or Shiledmasta depends on your strategy. Loatheb is good in just about everything. He helps control decks maintain control, and he stalls mid-game board wipes that can kill rushdown strategies. It’s fun to use him, sure, but if it turns out you *need* him, it just makes deck building one card less interesting. Much of Yu-Gi-Oh!’s forbidden list is dedicated to removing staple cards. 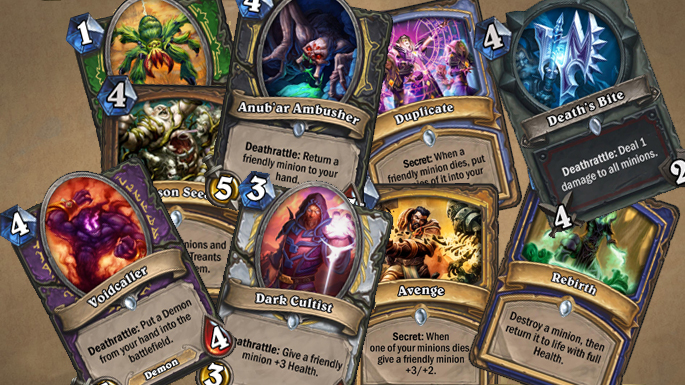 I’m not complaining about power creep here (it’s kind of inevitable in any collectible game), but a much more fundamental issue. Despite what its more adamant (and foulmouthed) critics might say, Hearthstone has so far managed to avoid being a “pay-to-win” game. Yes, having rarer cards opens up more strategies and lets you build better decks – that’s the nature of any collectible game. However, you can attain all of those cards by earning gold and getting lucky, and you can build very strong decks with nothing but commons and rares. The Naxxramas cards, however, are locked behind a paywall, and you need to grind for a lot of gold (700, which could be better spent on arena runs) to open each wing without dropping real money.

If Loatheb and other cards from Naxx become must-haves, it’ll create an environment where players who haven’t bought the adventures can’t compete. In turn, that’ll make grinding more difficult – and it’s already less fun since they can’t spend gold for the adventure on arena runs. If Hearthstone stops being fun for new players who aren’t willing to pay, that really could kill its long-term growth. Curse of Naxxramas is a lot of fun, and changes things up for existing players, but I worry its design philosophy could be detrimental to Hearthstone’s long-term viability.