In May we covered the first Neo Geo Pocket Color release to get a set release on Switch in SNK Gals’ Fighters. There, you had a game that focused on female fighters in a way that was unlike anything then or really now in that it wasn’t just a cheesecake game filled with fanservice and instead made you learn the ins and outs of the characters and their attack patterns. The first NGPC game to get any kind of a Switch release, however, was actually Samurai Shodown 2 as part of a pre-order bonus for the rebooted Samurai Shodown — which is now out with a separate release alongside King of Fighters R-2.

The Switch as a gaming platform has been something of an embarrassment of riches for fighting game fans. Over the past three-and-a-half years, we’ve seen the library grow from a revamped Street Fighter II HD port to having an all-encompassing Street Fighter collection, many separate Neo Geo classic fighters and the recent Samurai Shodown Neo Geo Collection to more modern games like Blade Strangers and even Mortal Kombat XI. The mere fact that we have the ability to play Neo Geo games anywhere is incredible as these games were once quarter-munchers if you were lucky and playing them at home cost $600 for a console and about $200 per game.

The Neo Geo Pocket Color was the first reasonably-priced device SNK ever marketed to the masses and they were smart to release a lot of their best-known franchises on it. The device also saw major third-party releases like Sonic Pocket Adventures and Pac-Man, with SNK’s fighting game franchises taking center stage just like they did on consoles. The King of Fighters series is arguably SNK’s biggest IP and saw a fantastic portable release that has held up nicely on Switch. 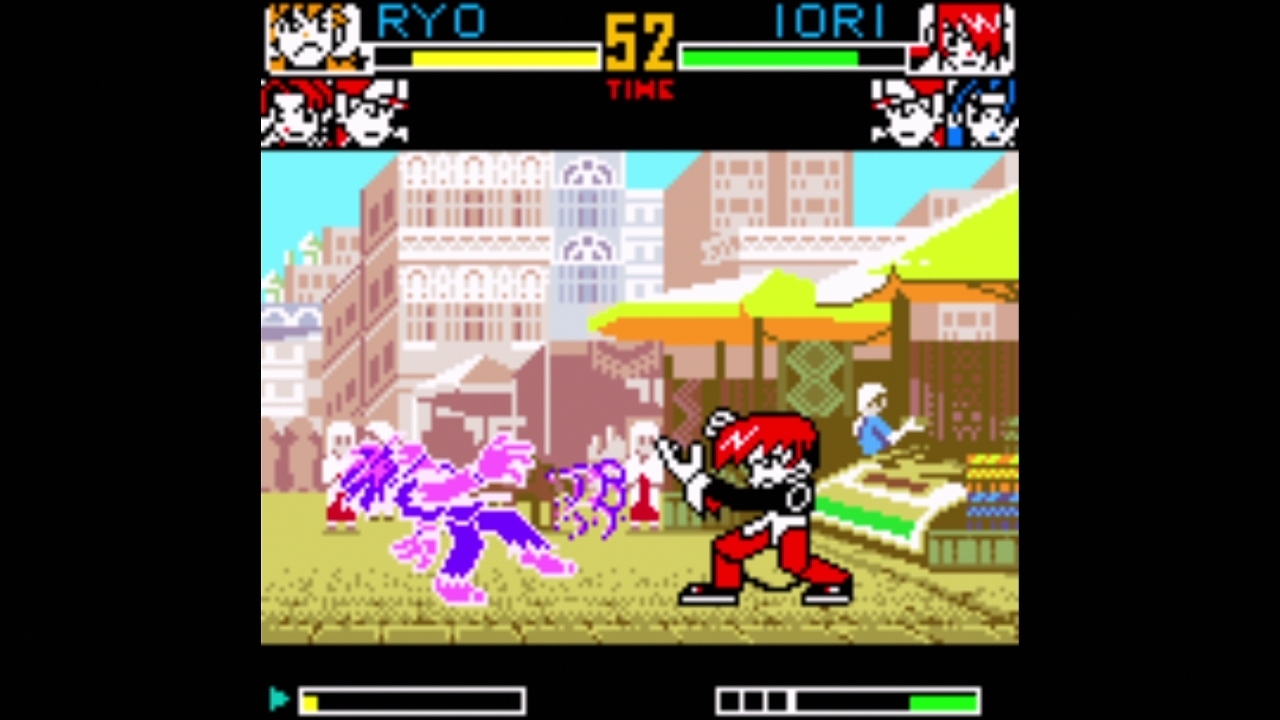 As with all NGPC Switch ports, you can choose to play the games with either an NGPC border on the screen – resulting in an amusing picture-within-a-picture visual as you have an entire virtual NGPC in front of you alongside your actual Switch in portable mode or play borderless with a 4:3 gameplay window or use a much more reserved NGPC border alongside that window. The NGPC had a ton of different color schemes available and I like that you can pick between all of them for your virtual NGPC border — including my personal favorite, the black and dark blue marble-esque design.

Every game in the Neo Geo Pocket Color Selection lineup is only $8 each, so they’re affordable and you can go with or without scanlines. I prefer to not use scanlines, especially for games like this that have such gorgeous background art. One constant with NGPC game design is that while sprites themselves lacked detail, they had a ton of animation and lush background art. Samurai Shodown 2 really shines in that regard, with a lot of colors being used to show off the wide variety of locations in the game. On the other side of that coin, KOF R-2 showcases tons of animation and features a lot of small flourishes on things like finger movement for Ryo as he prepares fireballs and punches that drive home just how much can go into well-crafted sprite work when a lot of care and attention to detail goes into it.

KOF R-2’s fighting action feels stripped down compared to the arcade games, but is still fast-paced and rewarding. The NGPC’s two button control scheme hurts the depth a bit, but by having things like distance play a part in which kinds of punches and kicks will land, it helps keep movesets diverse even with that limitation. The gameplay still feels nice and tight with impactful strikes made even better with screen-shaking that looks solid and far better now even with the scanline filter on than it ever did on the original hardware, where the non-backlit screen made details like that difficult to appreciate. The 3-on-3 team-based combat has held up nicely over time and while it may not be the definitive way to experience the KOF series, it’s still a unique experience and in that regard, actually holds up nicely compared to some of the mainline games that didn’t try much different and felt rushed out the door. 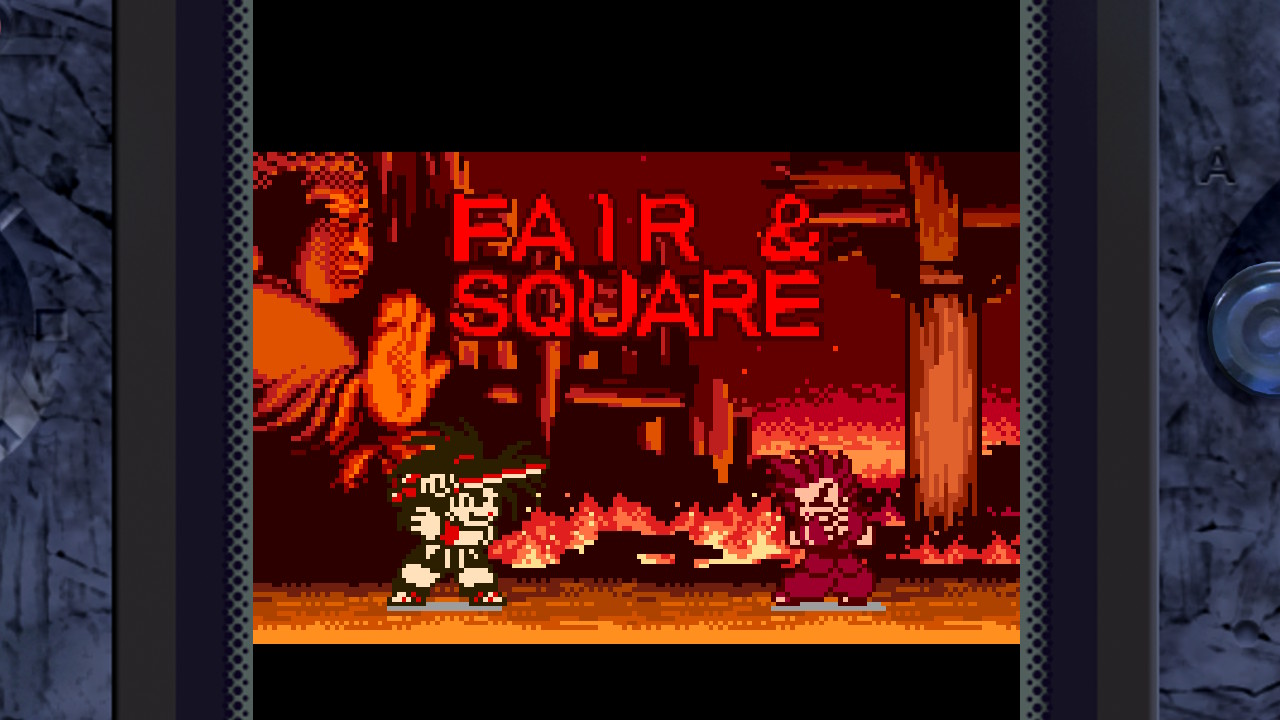 Compared to Samurai Shodown 2, KOF R-2 is a faster-paced game, but SamSho 2 may be the more intricate of the two. While KOF has you considering things like character order and the risk of losing a lesser-liked character versus one you prefer, SamSho 2 tests your brain in a different way. It’s a slower-paced fighter move for move, but that’s largely due to its weapons-based attacks taking more skill to either properly execute or evade depending on the situation. Here, trial and error are key as you learn how long not only long-range projectile attacks take, but also each kind of weapon attack. Some shorter-range weapons can deal out more damage at the expense of being riskier, while longer-range weapons give you better range at the expense of less damage per shot.

SamSho 2’s timing of attacks is also a big part of its gameplay since if you miss a shot, you’ll take more damage from your enemy’s next strike. This can result in rounds ending quickly and rewards careful, well thought-out play. You can’t just go in and button mash even at a low difficulty setting because the AI will light your ass up in a heartbeat if you go in without a strategy. It’s a good strategy if you have a death wish, but victory in SamSho 2 requires more precision, while you can be more casual in your approach in KOF R-2. Both games are still fantastic pick-up-and-play experiences and have held up remarkably well for being not only 20+ years old, but made for portable hardware. 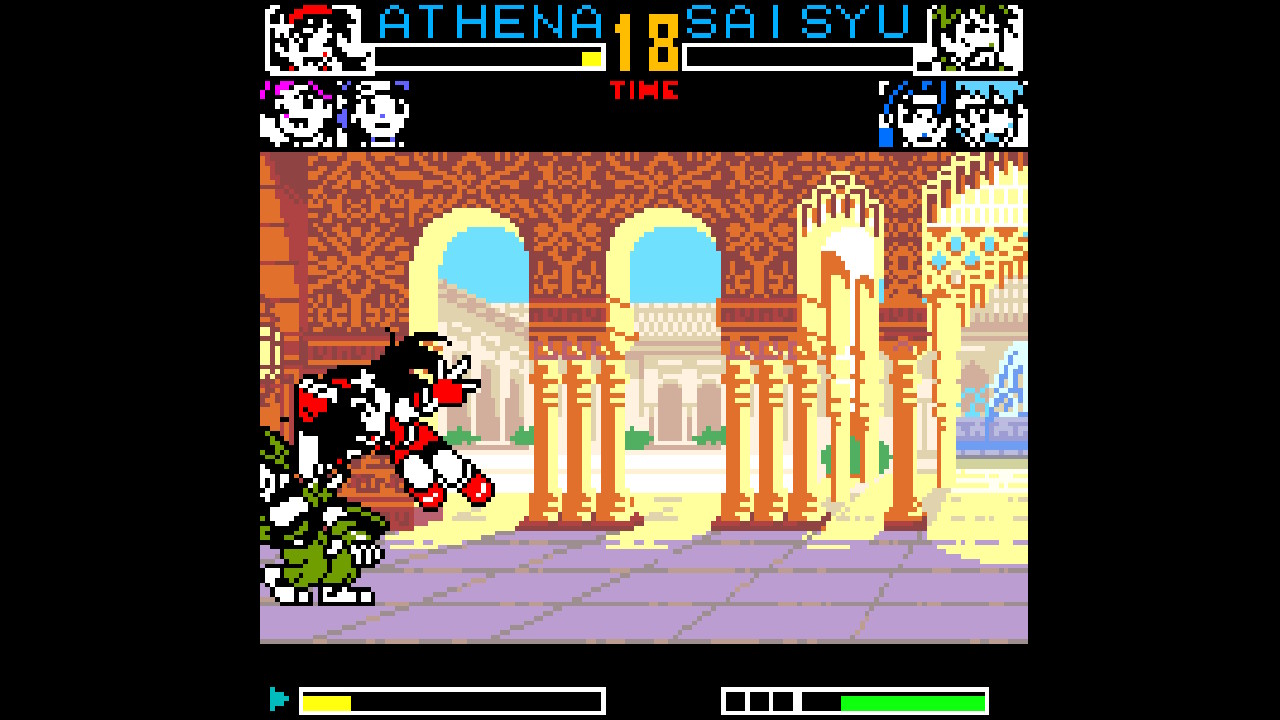 As with the other Neo Geo Pocket Color Selection games, the emulation is rock-solid and the games play great both in portable mode with some kind of grip attachment and like a dream with a pro controller. Stick controls feel natural and while it’s not quite a 1:1 replication of the NGPC’s stick, modern analog sticks do a solid enough job at replicating them — and if you want a more arcade-like experience, you can always get a large analog stick topper and put that on there to replicate the same finger positioning and movement of an arcade stick if you so desire.

They have stellar-looking animation and backgrounds, and the limited color palette for sprites looks good to this day. Their soundtracks are also top-shelf chiptunes with less depth than the arcade game OSTs, but still sound good — and sound better with more modern speakers and headphones instead of the NGPC’s iffy speaker. Both games are only $8 apiece and you can’t go wrong either way. If you want something more fast-paced, grab King of Fighters R-2, while those wanting a more skill-based and methodical approach will love Samurai Shodown 2.