Nintendo consoles are mostly talked about for their first-party games, such as Mario, Zelda, Metroid and Pokemon. There’s also no shortage of worthwhile third-party games on all Nintendo consoles, but these can be overshadowed by some of the more prolific aforementioned franchises. Travis Touchdown is a character who may not have ever become a household name, but those who are familiar with the cult classic No More Heroes and No More Heroes 2: Desperate Struggle know all about the otaku assassin’s exploits. Thanks to the popularity of re-releasing old games, these two titles are now available through Nintendo’s eShop for the Switch, allowing a new generation of players to experience these classics or for veterans to revisit them more conveniently on modern hardware.

No More Heroes is where we meet Travis Touchdown. A sleazy otaku and pro wrestling fan, he embodies many negative stereotypes about gamers in a nasty package. He’s an assassin after all and being charismatic and well mannered probably aren’t attributes that are high priorities for headhunters trying to find assassins work. Travis is currently ranked number eleven in the United Assassins Association (UAA) and sets out on a quest to take the number one spot. This moving up in the ranks isn’t done by improving his work ethic or taking on more prolific jobs, so he decides to hop on his motorbike Schpeltiger with his beam katana and kill all the UAA assassins ranked above him. Humor and excessive violence ensue as Travis goes down this path taking out the memorable assassins that stand in his way to the number one ranked spot. 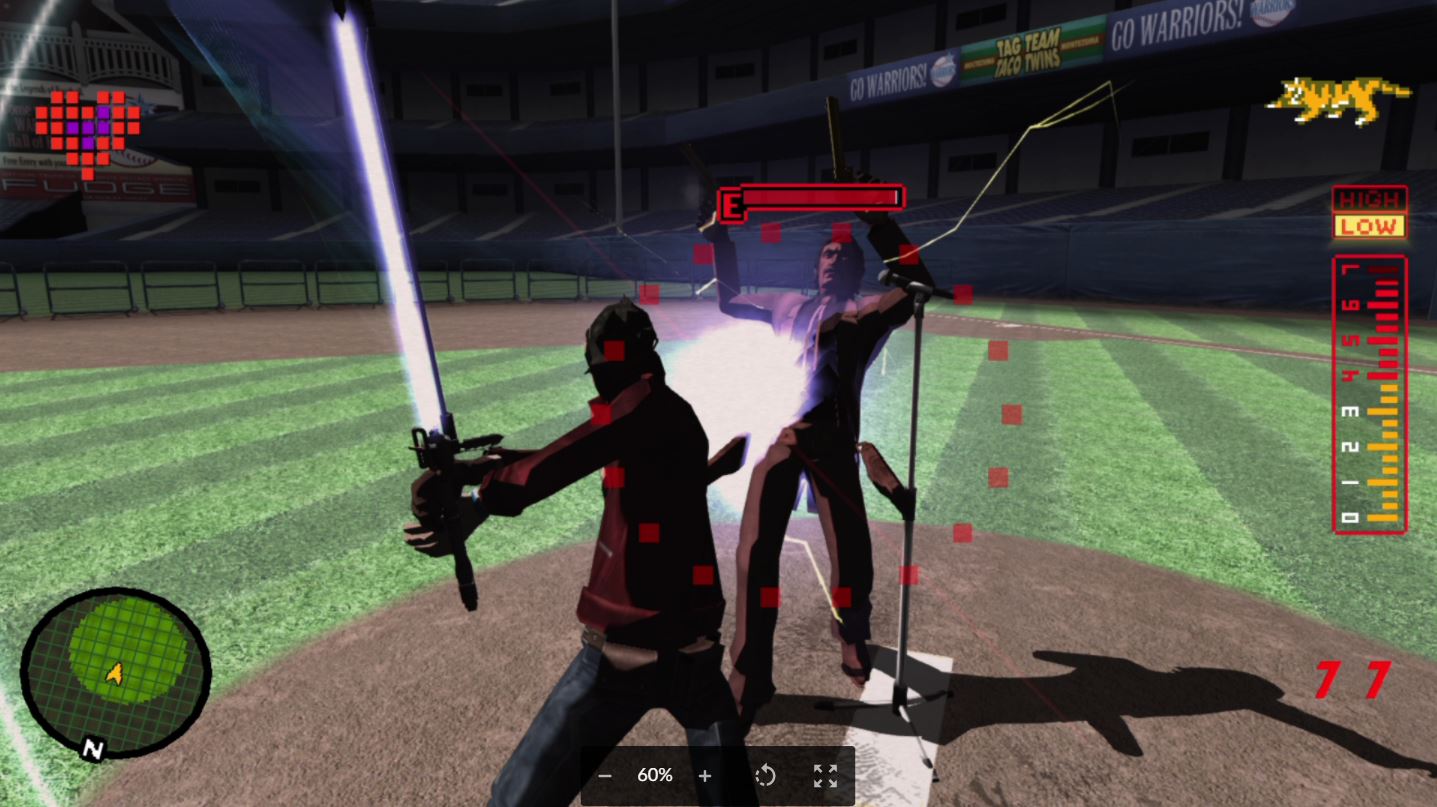 No More Heroes 2: Desperate Struggle takes place three years after Travis achieves his goal of being the top ranked assassin of the UAA. Unfortunately, he let success go to his head, didn’t do the work to maintain his top spot and plummeted to rank  51. Further complicating things is that an assassin by the name of Skelter Helter has sworn revenge on Travis for the death of his brother. Basically, the events of the first game are coming back to haunt Travis and he now needs to kill a much larger number of people to get back on top. So Travis doubles his pleasure with double the beam katanas and ventures out into the world to kill all his opposition to once again reclaim the top spot in the UAA.

No More Heroes 2 caters to Travis’s personality with 8-bit minigames. These are essential activities as assassinating other assassins can be expensive business. These games somewhat feel like metajokes with Travis’s love of video games and while not all of them are great they do help add variety to the experience. Travis’s adventures take him to bizarre scenarios, such as a football team and cheerleader mech battle and a plot outside of Star Wars that involves someone being frozen in carbonite. The story is ridiculously over the top, yet also gritty and violent enough to keep the overall feel of the No More Heroes Universe nice and dark. 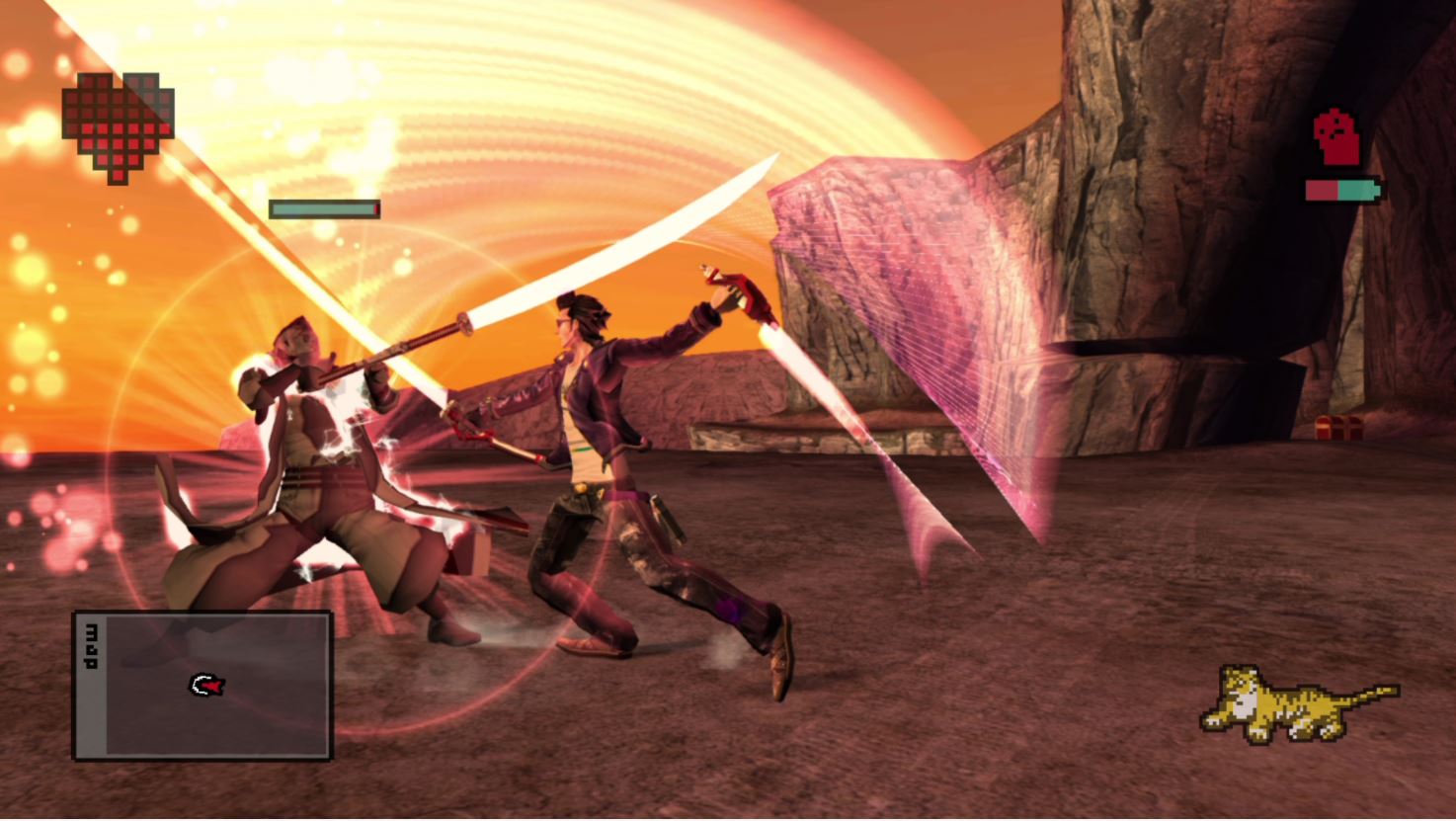 No More Heroes and No More Heroes 2: Desperate Struggle hold up well for both being over a decade old. The motion controls on the Switch aren’t as cool as they were on the Wii, but playing it in a more traditional manner with a gamepad works fine and is actually the preferred method on this platform. Between the two games the sequel is the more enjoyable title, even though I’m sure there are some reading that sentence and screaming blasphemy. The visuals do look better on the Switch even though they maintain their classic retro image. Because of the unique Wii controls porting these titles to a modern console did initially raise concerns, but those were all put to rest after playing these ports. Whether someone is a newer fan of Suda51 and missed these games the first time around or someone who has fond memories of these titles, the two No More Heroes games score a heroic touchdown with these ports.