The “unexpected” new announcement at last year’s Game Awards from Nintendo’s camp understandably didn’t illicit widespread interest. But for that small pocket of us who came to eventually love developer Silicon Studio’s Bravely Default on the 3DS, the idea of a sequel — not to be confused with the 2016 follow-up set in the same world/setting — on the Switch was a pleasant enough surprise. The unveiling of Bravely Default II might not have the widest or indeed the most vocal fanbase out there to claim its relevancy or importance. Rightfully so, given what little we had to go on with its initial trailer were a few bits of concept art and a theme I still go back to listen to. But even that is a reminder on Bravely Default’s own special circumstances and why it was as impressive way back in 2012. An interesting twist on turn-based battles, with its “Brave” and “Default” subverting of the genre’s rules if you will. But accompanied by this fairytale-like illustration of environments and a soundtrack that gave the portable JRPG such a jolly, inviting breadth of scope. Bravely Default was an excellent case for finding synergy with old-school favoritism and modern-day intrigue through more than its gameplay.

But like all series that eventually make the leap from portable to home console (though technically still portable in some respects), would Bravely Default II manage to maintain that fond attraction to its setting, its music and more so its combat? Square Enix, in conjunction with the game’s appearance during Nintendo’s latest Direct Mini, put out a demo of the opening couple of hours. A mention that they would once again be taking a survey in order to collect feedback on what needs a second going-over and fine-tweaking. Here’s hoping the team are all-ears on this one, because if one’s brief experience with the demo is any indication, Bravely Default II is in dire need of refining. That’s not to say the initial spectacle doesn’t warrant a familiarity that made both the original and Second a joy to simply traverse through. And yes, confined to one settlement the demo limits players to, there’s still a charm to how particular buildings and parts of the environments serve that children’s story-book comparison. How they look as if they’ve practically popped up from off the ground — held up by some folded paper craft from behind. All of which is once again framed through the pulling perspective out a fair distance as you guide main protagonist Seth through town settlement and amidst the monster-infested overworld alike. 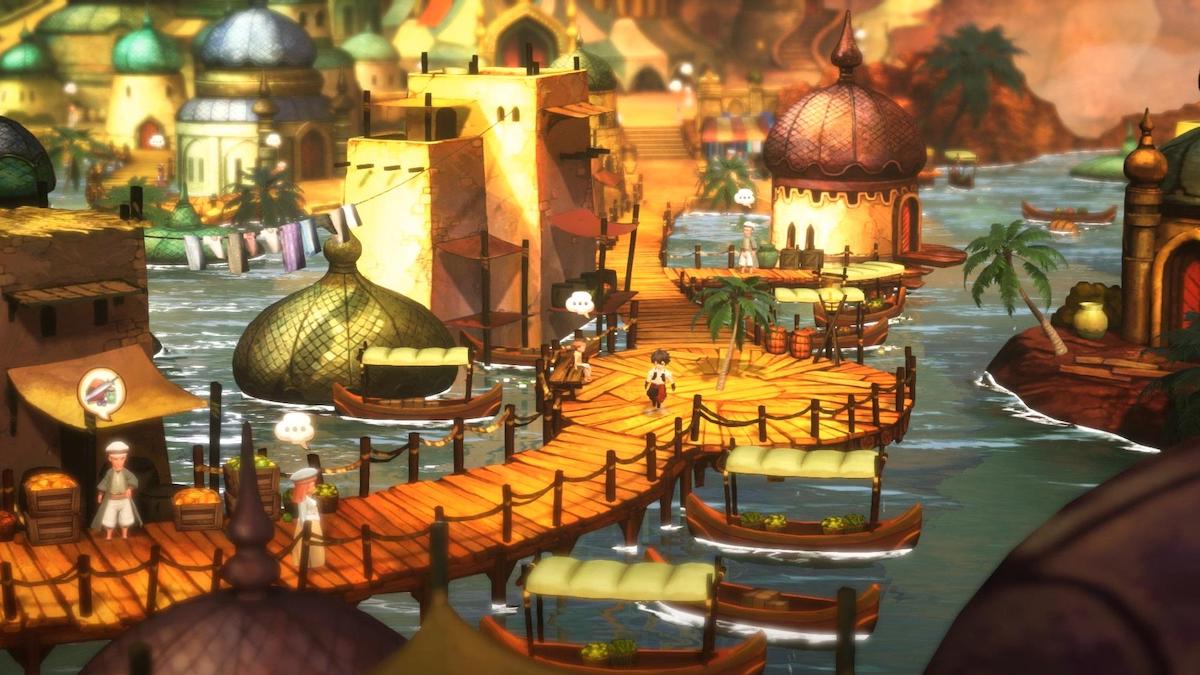 That illusion, its underlining aesthetic, with the supposedly miniaturized, toy-like playfulness extends beyond the environment design. How the genre-staple inn and shops play out like scenes on a stage. Much like how conversations between your party find them entering/exiting figurative stage-left and stage-right. If only the game would break from out the tired lack of voice work for its optional skits. But even in combat, the series’ eventual arrival on Switch also means combat can benefit from the series’ use of the fantastical and the playful. How monsters come across like toy models — a companion to your main party’s otherwise semi-chibi in-game designs. It’s not quite Link’s Awakening in that everything seems intentionally coated with that glossy, plastic-like texture. Toys coming to life. Yet it’s a smart way to compensate for the Switch’s hardware capabilities. On the flip-side, however, you needn’t go far to spot large slews of environmental textures lacking and occasional frame-drops — even with the application of motion blur to shoo prying eyes from its 30FPS performance. A consequence perhaps of II’s doubling-down on art-style over detail, a delivery that bolstered the 3DS titles’ appeal, but undoubtedly a harder pitch now we’re in console territory.

It’s important to highlight what Bravely Default II has so far succeeded and modestly convinced us on, so as to focus more so on the considerable task the game has in order to not simply be good to look at, but good to play too. Because if you take out all the praise for its visuals, its aesthetic, its homing in on that illusion to literal portability, Bravely Default II when treated as the turn-based JPRG it still is, is off to a rough, and annoying, start. Forget for a moment that the demo has had its difficulty cranked up. Why? Goodness knows; what benefit Square Enix or whoever thought they’d get in not properly reflecting the natural progression? It doesn’t help to find random encounters darting from mountain peak spikes to valley-deep cakewalks at frequent intervals. Nor does it help that damage output itself mid-battle can range wildly from shoulder-shrugging double-digits to around 700HP average for particular monsters’ “special” attacks. How the lack of visualizing turn order (something even Octopath Traveler, if you’ll allow that game in among this gathering of JRPGs, sought to include) means battles can devolve into praying enemies will target the characters you’ve set to the Default state. 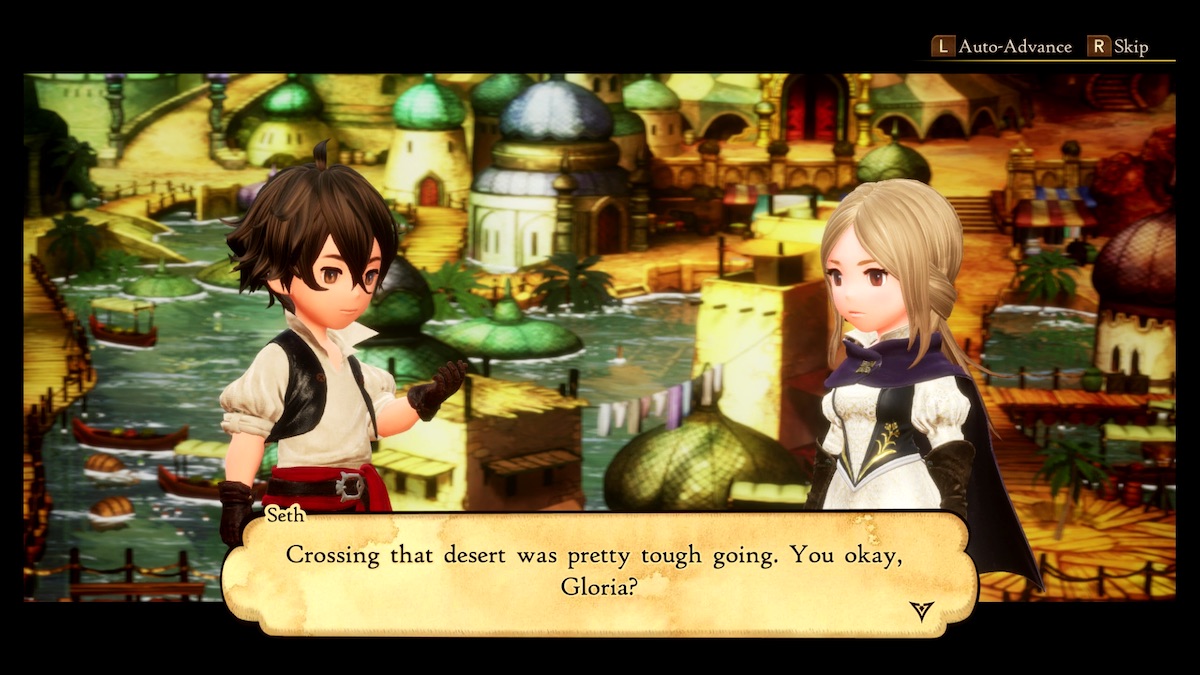 This might all be a side-effect of the difficulty scaling, but even when that’s taken out of the equation, questions remain still as to some of the more basic design decisions. Decisions that, like all good JRPGs, should warrant that signatory caution in trudging forth, but shouldn’t be forced on the player for lack of variety or anything else interesting to immerse in. Whether that’s the way monsters respawn frantically and erratically in the overworld or how the locked overhead view of dungeons, of which you can’t freely spin or rotate, means enemies can attack you (maybe even gain the upper-hand) from off-screen. How there’s little time to react; to read the map given monsters aren’t even highlighted. How combat itself is a luck-of-the-draw dealing of three/four/five/six foes at one time — enemies that don’t necessarily feel like their placement is some natural progressing in difficulty or attack complexity. Feel like retreating out of that dungeon so as to begrudgingly grind a few levels and some much-needed currency knowing that it may be wise to save up for the strongest weapons, maybe sacrifice wielding two weapons so that your characters are more likely to absorb damage, rather than take it? Well, so long as you get out in one piece, don’t die and find yourself having to do the whole thing over, given how you can’t save mid-dungeon outside of a lone save point right outside the main boss arena.

Good thing you can so easily flee battles to find that former overworld/dungeon foe has vanished. But doesn’t that just surmise the pointlessness and bizarre imbalance of what Bravely Default II‘s first impression stands as at present? There’s still intrigue and potential sure as to the variety of Jobs and abilities you can play around with when it comes to tailoring your party. You needn’t commit fully to one character being the designated Healer class; simply assign those traits to the secondary slot and usually, you’re good to go. Minor details as well find their place in among the charm. Enemies whom you gain an advantage over, sometimes turn around baffled, startled at having to engage in combat. Complimented again by the general feeling of a miniature world lifted onto the big-screen. The Switch might not provide as grand a boost in power, but it’s promising to see that same aesthetic — that meshing of hand-drawn illustration and stylized 3D models — alleviating some of its performance limitations. 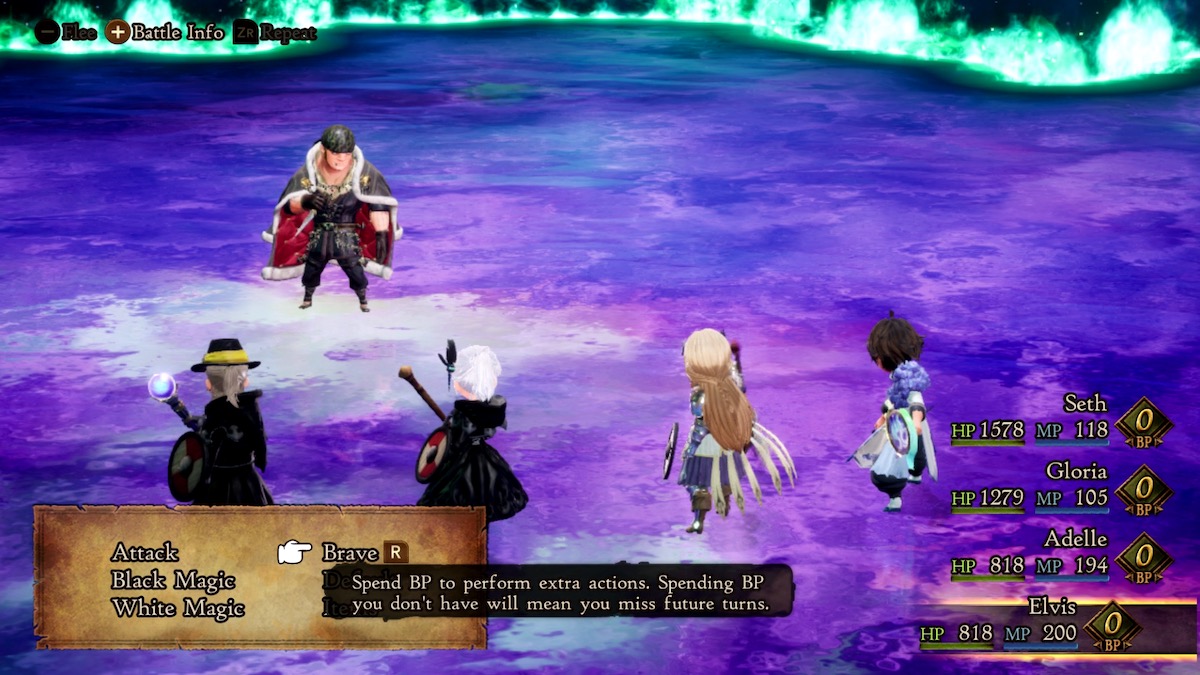 Again, take all concerns with difficulty, damage output and the very nature of enemy behavior with a pinch of salt. Yet thinking back to even the demo laid out for Octopath Traveler, even that vertical slice had more of a grasp on the kind of experience it was wanting to lay out. How its unique art-style wasn’t simply the end-point, that there was more lying in wait via its Break system and on players making smart, long-term decisions. Bravely Default II by contrast feels half-baked, hoping perhaps to ride it out atop the crest of its visuals. A more difficult spot to work one’s way out of, given how unpolished and needlessly wasteful the demo feels with a player’s time. But this isn’t simply a case of tweaking the numbers; the rough start extends to its general lack of striking some fine balance between convincing players to take up the challenge, and simply throwing challenge atop them without so much as a steady progression. A means to pad the play-time out maybe, but let’s hope feedback resolves these many annoyances. There’s sure to be plenty of that I imagine; maybe start by adding a turn order atop the screen so that that risk:reward premise doesn’t entirely come off some merciful presence of dumb luck. Bravely Default II does at least look to carry on the spirit of its portable counterparts. But at the moment, tempting the Brave/Default options and the series’ Job classes remain, there’s a lot of work behind-the-scenes abound if the game hopes to see players stick around long enough.