Whenever I hear that a game I’m somewhat interested in launches incomplete or broken, it generally means I’m going to wait a few months before finally diving in. This was exactly the case with LittleBigPlanet 3, the first title in the beloved franchise that wasn’t developed by Media Molecule. While Sumo Digital largely captured the essence of the loveable world that arguably the most charming non-Nintendo studio created, the numerous launch bugs and glitches gave me some pause. After all, LittleBigPlanet 3 launched on the same day as Far Cry 4 and our Game of the Year Dragon Age Inquisition, so there was no rush to dive into Sackboy’s latest adventure until it was fully functioning. Sadly for myself and any other gamers who are looking to play the most recent LittleBigPlanet title, there’s still a number of technical issues and game-breaking bugs that completely mar the experience.

After playing through the entire campaign and one-third the final stage, I encountered a bug that prevented me from actually defeating Newton. As many of you know, LittleBigPlanet 3 features three new playable heroes: Oddsock, Toggle, and Swoop; in order to complete the final level, players have to use all three of these characters to free Sackboy from Newton’s clutches. After playing through the Oddsock portion, a door opens that allows players to swap between Oddsock and Toggle in order to play the next portion. While this portal worked the first time I used it, my untimely demise in the next section (even though I love LittleBigPlanet‘s aesthetic, its floaty controls have always given me some trouble), permanently locking this swap portal. No matter how many times I restarted LittleBigPlanet 3 and my PlayStation 4, there was no way to make the portal open and complete the level. Considering I was merely playing LittleBigPlanet 3 to shrink my backlog a bit, and nothing more, I wasn’t compelled to delete my save, play through the previous four and a half hours of the campaign just to see the final cutscene. This wasn’t something that happened on day one; this game-breaking bug occurred six months after launch. My time, like that of many other adult gamers, is extremely valuable, and if I feel it’s been wasted, I’m not going to give away any more of it; Sumo Digital officially lost me. 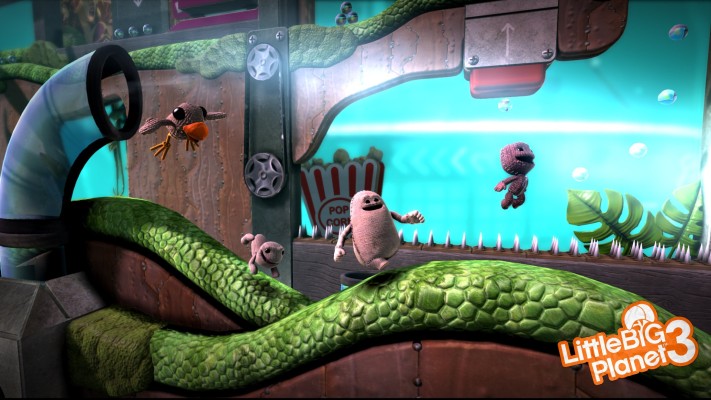 This wasn’t the only bug I encountered in my time with LittleBigPlanet 3. There were moments where cutscenes would stop and start without reason, awkward moments where characters would continue speaking during loading screens, and moments where the framerate inexplicably dropped. Media Molecule created a number of impeccable games, namely the incredible LittleBigPlanet 2 and potentially the best game in the franchise, LittleBigPlanet Vita, so to see a beloved series stumble with a new developer is depressing.

A major question has popped into my head as a result of my underwhelming experience with LittleBigPlanet 3: will I ever play another LittleBigPlanet game? Media Molecule has moved onto different endeavors, announcing in 2011 that it was “stepping away” from LittleBigPlanet. The main thing that kept me coming back to this franchise was its level of immersion and general weirdness, rather than its mechanics. Is it worth playing a hypothetical LittleBigPlanet 4 if its made by a studio in Sumo Digital that dropped the ball so significantly? Time will only tell.