We have seen a handful of the Neo Geo Pocket Color’s best games come to the Nintendo Switch, and now, perhaps the device’s definitive fighter is available anywhere you are. SNK and Capcom defined the early ’90s fighting scene, and having a collaboration between the two companies was something of a pipe dream as they were competing for the ever-valuable arcade market. Fortunately, as both companies found more success on consoles and had some jabs at one another with various in-game characters, it seemed like a bit of ice was broken and they saw one another as friendly rivals. A deal was struck to where each company could use the IP of the other company and the company developing the game would get the profit — so it kept that ever-present competition between them alive, just in a different way.

SNK crafted a fighting game for the Neo Geo Pocket Color and a card battle game, while Capcom created a full-on arcade game in Millennium Fight 2000 and then a sequel in Capcom vs. SNK 2. The latter game hit the Dreamcast, PS2 and Gamecube before also getting an Xbox release that wound up being released in full (in the Japanese language) on an Xbox demo disc. The EO version of that game on consoles also featured a simplified control scheme to help ease players in — or just enable folks to get great-looking screenshots with minimal effort. 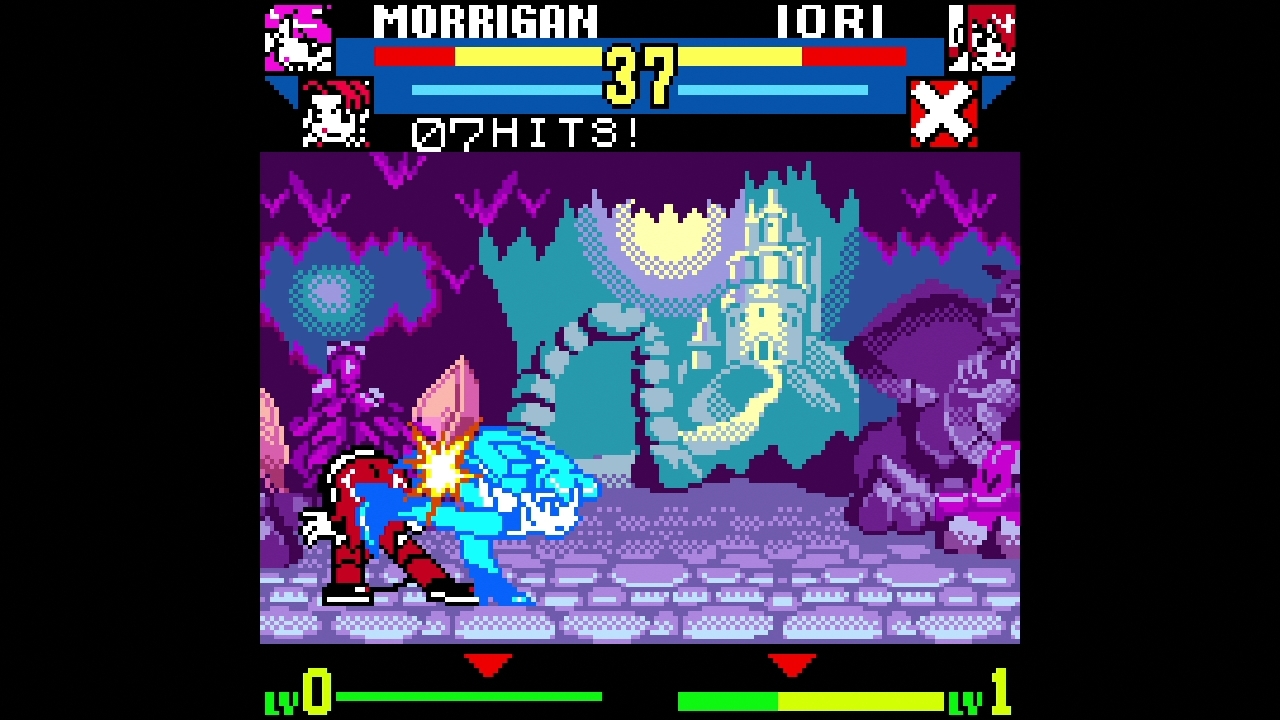 Being the first to bat and with much lower hardware to work with, SNK had their work cut out for them, but did a fantastic job overall. When it comes to the roster, SNK went with a diverse lineup from both their own library and Capcom’s. Capcom leaned heavily on the Street Fighter series, with only Morrigan appearing outside of that, and went with a Fatal Fury/KOF-heavy lineup for the SNK side. SNK went for a wider variety of their own roster, with Fatal Fury, KOF, Art of Fighting, Samurai Shodown and Psycho Soldier franchises represented by default with The Last Blade being showcased with a hidden character.

Most impressively, on the Capcom side, they went a bit beyond what Capcom did for their own game. The Capcom side is still Street Fighter-rich, but features more Darkstalkers characters – including Felicia and Bonnie Hood alongside Morrigan. The roster includes a slew of hidden characters and the game itself has some enjoyable mini games to keep the fighting action fresh during longer play sessions. The so-called Olympic events (and yes, that name is retained in the re-release) allows you to have fighting mini-games or even a miniature FPS-style game with helper characters that offer advice. Beyond non-fighting events, you can also have survival modes and first-trike events that help keep you on your toes. 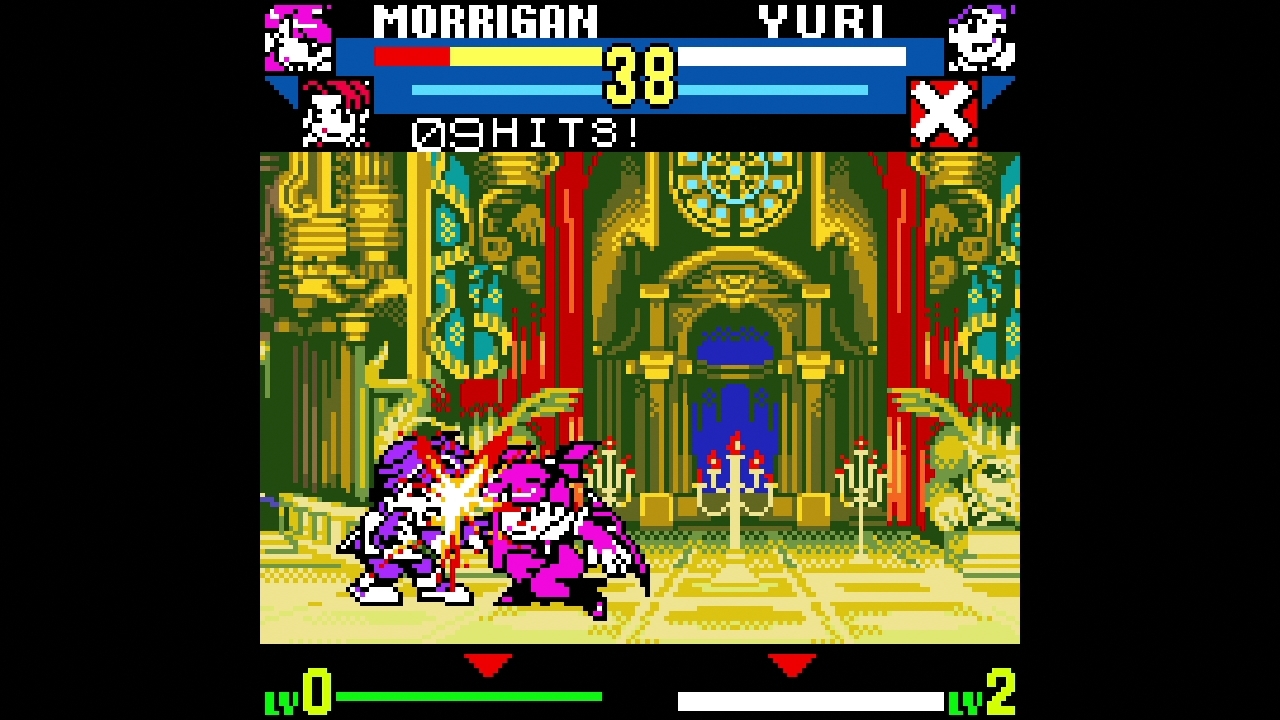 The core fighting action is very much like King of Fighters R2, with a story in place where the major SNK villains like Geese Howard team up with M. Bison to battle each crew — with each character also getting their own little side stories mixed in as well. Morrigan has a playful rivalry with SNK’s female roster, but likes Mai. Each character also has a rival, so while Morrigan may like Mai, she can’t stand Nakoruru. Kyo and Ryu can’t stand each other, while Ryo hates Dan in a cute nod to Dan being crafted to mock Ryo. SNK did an amazing job retaining the feel of the Capcom fighters of the day with their own engine and I love little touches like Evil Ryu being a bit more zombie-like in his movements to help set him apart from regular Ryu.

The core fighting action is a ton of fun and you can choose between either going in as a team or enduring more challenge by flying solo. Unlike the King of Fighters games, you can’t swap out at the drop of a hat, but instead have to wait for one character’s health bar to fully deplete. This does add more strategy to the mix since you can’t rely on being able to switch out to regain some lost health and need to make extra sure that you pick characters you’re good with. Going with the randomization option makes for an interesting challenge as you may wind up with a tougher character to use, like Zangief, who relies on more short-range attacks which require you to play in a riskier fashion to win. 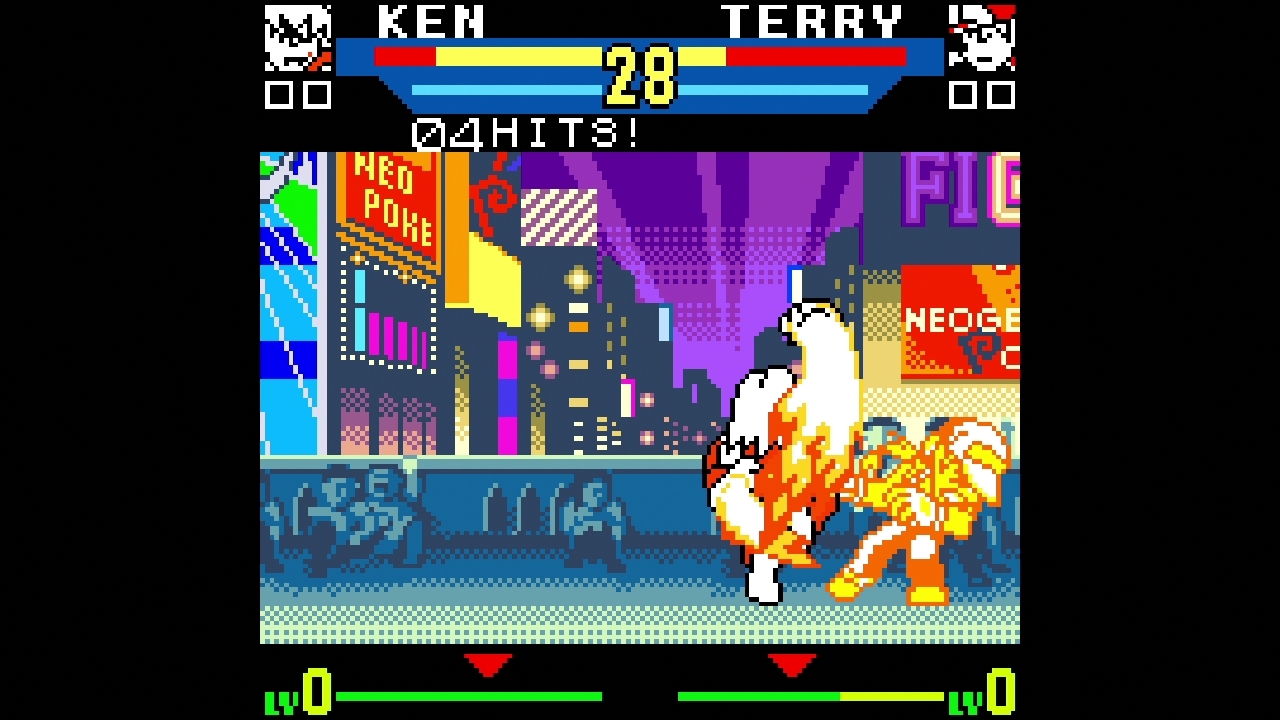 Each character feels pretty much at home here, which is especially impressive for the Capcom cast as you have a diverse group of characters in terms of fighting styles. Long-range characters like Ryu and Ken have to play as naturally as short-ranged ones, and the transition from arcade and higher-end console sprites to the 8-bit look for them on the NGPC with limited colors works well. While the system was 16-bit, it generally used limited colors and bold character designs for all of the SNK games, giving the NGPC a distinct style that no other system can lay claim to since so much of the console’s library is made up of first-party games.

Faces are expressive and animation is kept robust thanks to the simpler sprites, while a lot of attention is paid to backgrounds and the environments as a whole. There are real stunners here, including a run-down lab and a gorgeous castle setting that features lush architecture that you see from the top panning down to the bottom. One great thing with the NGPC is that the devs knew where they could make things look good within the limitations of the hardware, so they emphasized that and it pays off with backgrounds that hold up nicely over twenty years later. 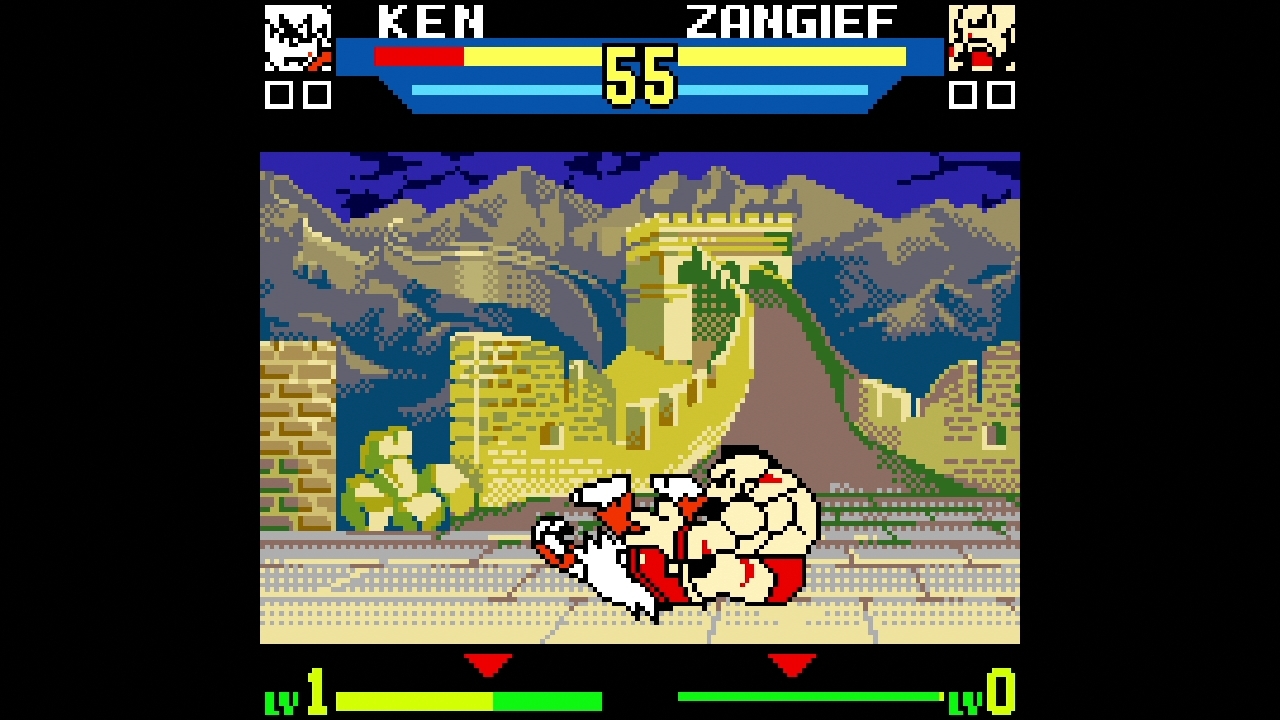 The 8-bit chiptune renditions of classic songs work nicely, with the revamped version of Ryu’s song managing to be a bit catchier in this form. It’s amazing just how well songs have translated despite having to be completely redone, and the usual sharp NGPC sound effect work is at play here — with perfectly-landed punches and kicks sounding as violent as ever while projectiles offer up a more light-hearted sound unless they use flames. In that instance, you wind up getting a sense for just how singed someone’s flesh is going to be — especially as their whole body is enveloped in flames.

SNK vs. Capcom: The Match of the Millennium is the centerpiece of the Neo Geo Pocket Color’s library for a reason. In its time, it was the best fighting game on the platform and now, over 21 years later, it’s clear that SNK’s core game design for that device was timeless. The 8-bit look combined with a more robust background design offers up an interesting blend of styles while also making this almost a retro-looking game at the time of its release and now. Since so few games really go for the NGPC style, however, it’s almost more timeless than other 8-bit-influenced games since there isn’t an abundance of games using this art style. It still plays like a dream and works wonderfully in either portable mode or docked mode with TV playback. There, you really get a sense for how much work went into the backgrounds and facial expressions for the roster and if you never had a chance to check this game out, this is the best way to do it. Players can enjoy the game via either the Switch or Steam.