With the ever-growing rise of independent developers, gamers have started to pick out the ones that are worth keeping an eye on, forming a proven track record despite a relatively small library. Noteworthy names such as Playdead, Klei and thatgamecompany have all established themselves as creators that can stand shoulder to shoulder with the biggest AAA developers out there, as fans have helped them get their time in the spotlight. Another small team that has made a big splash is Supergiant when they entered the public eye in 2011 with their inaugural title, Bastion, which has received several ports throughout the years to meet the well-received game’s continued demand. Three years later, the American studio released the cyberpunk adventure Transistor, which our review called a “wonderfully sound, beautiful RPG” as well as “one of the strongest games of 2014.” Later this month, Supergiant is releasing Pyre, a fantasy RPG with a mixture of arcade sports gameplay and dialogue heavy storytelling. Their third title looks to continue the studio’s streak of gorgeous, deep worlds and unique combat and it’s worth diving into what special ingredients Supergiant continues to rely upon to create such renowned games. 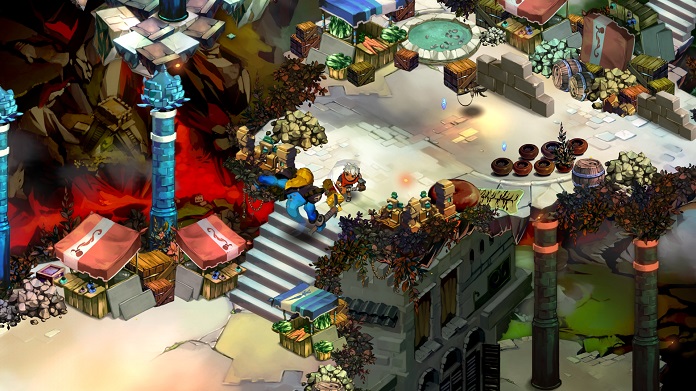 To be fair, as any well-versed fan of any medium will know, no universe is truly original, instead borrowing elements from other pieces of media and putting in their own unique twists and elements of their own. Nonetheless, Supergiant has put forth their best effort into making each of their worlds feel one-of-a-kind, and to their benefit, that hard work has certainly paid off. While the environments of both Bastion and Pyre contain fantasy elements, they look vastly different from one another, and feature a color-variety and animation style that make it stand out from nearly everything on the market. Transistor relies a bit more heavily on a single color and its various shades, but makes the most of it through smartly designed levels and cities that draw upon cyberpunk stories of past.

Fascinating worlds and independent titles certainly aren’t an unusual combination, but Supergiant enhances them through the usage of its lore-packed storytelling. Both Bastion and Transistor drop players into these worlds that seem to have been alive before their arrival, and yet these plots often tease these memories at a slow, lengthy pace, as unreliable narrators hint and mislead the player with morsels and tidbits here and there. These mysterious buildups end up leading to packed lore drops that feel less like a punishment, as they occasionally tend to in other games, and more like a grand reveal, as players can finally connect the dots as to what they’ve experienced so far and what they must do now to continue forward in these dangerous lands. This style of story pacing remains unique to both small and large-scale games, and while Pyre seems to be separating itself slightly in that regard, the party system and the dialogues that will ensue seem to still contain the best components of Supergiant’s mythos-heavy style of storytelling. 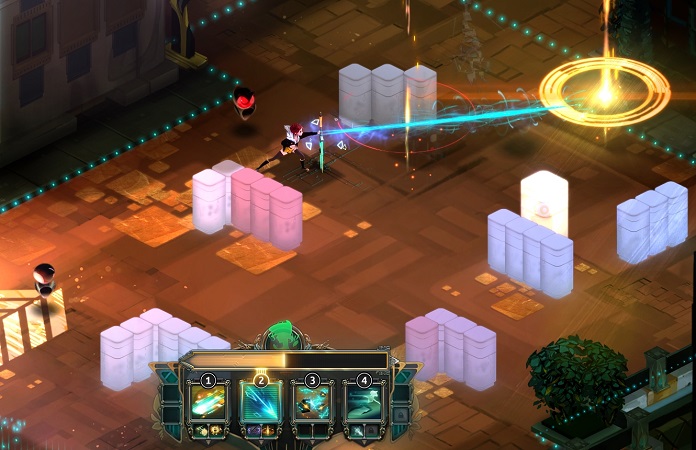 Fortunately, Supergiant’s titles don’t solely rely on these non-interactive aspects, as enticing as they are. Each of these games offer the player plenty of options as to their preferred playstyle, while simultaneously providing unique gameplay that mashes up genres in fun and captivating ways. Bastion’s real-time combat relied heavily on weapon combinations and fast-paced offense and defense, while Transistor’s mashup of real-time with turn-based forced players to spend their energy wisely as they confronted different enemy types and unlocked new powers. With so many different ways to approach any situation, very few playthroughs felt similar to one another, with Pyre’s party system once again embellishing this aspect of creative design in their newest title that Supergiant seems to value so heavily. On their own, each of these elements would be praiseworthy but more easily forgettable, but altogether, Supergiant has instead created two small-scale but deep RPGs with big hearts and strong gameplay that have cemented the studio as one of the most significant in the industry, independent or otherwise. That legacy has the opportunity to be further justified next week when Pyre launches on July 25 for PS4 and PC.