There has never been a better time to release a new MMORPG onto the unsuspecting market, and Gameforge is looking to do just that with Swords of Legends Online. This is a Chinese-based MMO from a couple of years ago that has only now found its way to the western market, and with it comes some of the most beautiful vistas you will see. Gorgeous environments wrapped around Chinese lore, if you’re someone who loves this concept, you’ll fall in love with the world. On top of that, the developers have created a diverse and entertaining combat system that always has you on your toes. While there’s lots to love with Swords of Legends Online, there’s still a bit that has gone wrong adapting it for western audiences.

From a gameplay perspective, Sword of Legends Online is highly entertaining. There’s a solid number of unique classes that can act as very different roles depending how you spec them. Some you wouldn’t normally expect to be tanks or healers are, allowing for a good deal of variety in terms of replayability and trying different classes. We played as a Spearmaster and enjoyed it greatly. Combat itself is button mashy, with core mechanics being tied to a single standard attack, and another that eats away at a Rage meter, similarly with Summoner which instead uses Soulforce. You’re able to modify these attacks with various cooldowns, so for example, pressing one will unleash a bevy of strikes, replenishing the Rage meter, and the Rage strike being a heavy hitting finisher. Combat feels fresh and is the driving force we continued to play. The general movement of your character on the other hand feels slow, even though you’re able to summon a mount and fly at any given time. Dashing doesn’t feel good at all whilst in battle, which is strange considering the rest of the skills and core combat is intuitive and engaging. Fortunately, that’s the only real complaint as combat is the best component of the game. 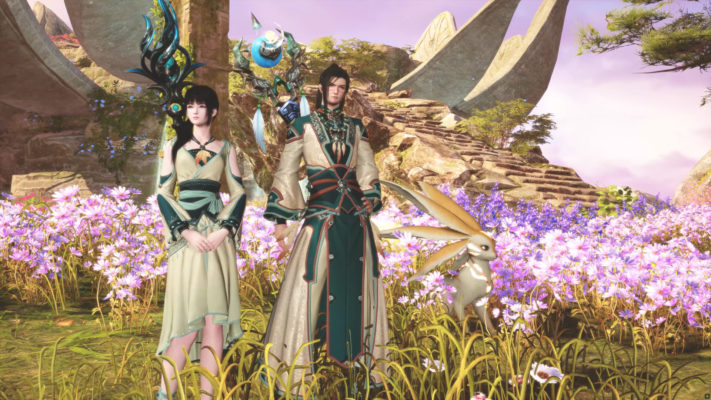 Unfortunately, everything from a presentation point of view is disappointing. While the music is serene, the visuals can be either downright awkward or outright beautiful. There’s a strange inconsistency with the graphics, with high-quality models scattered amongst low quality ones all over the place, both in terms of characters and environments. Artistically it’s phenomenal and there are elements where it can just look downright stunning, but then there are times that it’s brought down with its disparity.

On top of this, the cutscenes are some of the worst seen in this day and age, at least from a game with what seems like a decently high budget. English voice acting is cutting off all the time or they can be found repeating themselves over and over again. The latter is the most mind-boggling one, as there’s nothing that will pull you out of the immersion more than a character repeating the same line until the cutscene is concluded, with none of the other characters being able to speak. There are even multiple instances where, despite having English voice acting as the option, Swords of Legends Online still plays the Chinese track. This doesn’t happen a couple of times, but frequently. In addition, there are parts of the game that are just straight up not translated; you can kind of understand some of text that wasn’t translated as it’s mostly character profiles (telling you their age and such), but this is still sloppy beyond belief for a release in 2021. 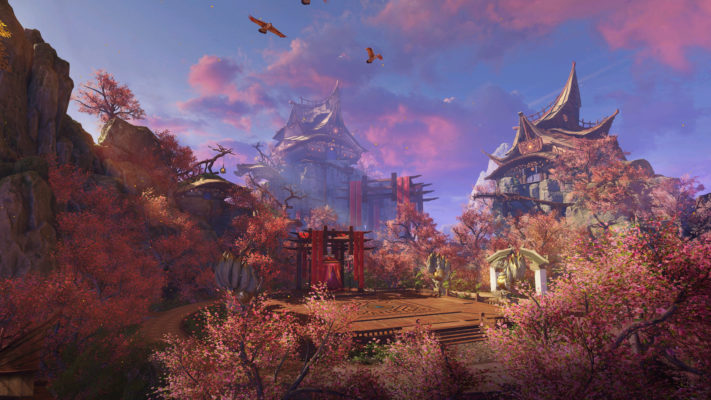 Obviously, we can’t talk about Swords of Legends Online without talking about the cash shop. At launch, Swords of Legends Online has an incredible number of optional options that will put some of the free-to-play games to shame, and that’s not a good thing. Thankfully, everything is aesthetic and nothing (as far as we can tell) is pay to win. Unfortunately, the vast cosmetic items that you may want to make your character as beautiful or flashy as possible is tied behind expensive items. Don’t like how you created your character? Well that’s ten dollars. That’s not that bad, but charging $20 extra to change your gender is egregious. On top of that, at launch there were 33 different hairstyles ranging from $7-14, 26 outfits around $25 each, 32 accessories for upwards of $10, a couple of weapon skins for just as much as full on outfits, and seven mounts ranging from $25-40 — and since writing this they have added even more. There are a decent number of customizations when creating your character, but even changing your hair color outside of a dark shade such as black or brown, you’ll need to pay.

Swords of Legends Online is an awkward game. It can be highly engaging from a gameplay perspective, with combat that’s fast paced and intuitive, but everything else is a frustrating mess. The visuals can look downright beautiful at time, especially the environments, but there are areas that look low resolution, character models that stand out poorly and the animation during scenes are beyond janky. It doesn’t help that the translation is poorly done, and that’s putting it lightly. The English voice acting can sound like text-to-speech voices not only on a couple of characters, but most of them. The dialogue that’s spoken only matches what’s actually in the subtitles maybe 70% of the time, which is baffling. This isn’t something like selecting a dialogue choice in an RPG and it having different dialogue than you expected; this is like the actors going completely off script. I want to like Swords of Legends Online so much; it has such a beautiful aesthetic, an engaging combat system and fairly robust RPG mechanics. Unfortunately, there’s so much holding it back, and in a surprisingly competitive MMORPG market as of late, it’s difficult to recommend dedicating time towards it.