VR is coming and it’s not the future of gaming. There’s no question that it’s going to offer something new, in a way that will take a huge portion of the gaming industry by storm, but the thing to keep in mind is that there is no the future of gaming. Every new twist, update and change to the tech that drives the industry is simply part of the overall gaming backdrop, and while some features may rise to prominence for a time, they quickly get integrated into the greater gaming whole.

Take dual-screens. Remember the pictures and Photoshops making fun of the DS when it was announced? While Nintendo is the only one to make this particular tech work, the twin-screen look of its handhelds is iconic and a change from that would seem strange no matter what the NX turns out to be. Motion controls, on the other hand, were a fad. A fun fad, sure, but of limited use in anything but a small number of games no matter how hard developers tried to shoehorn the feature in. The Kinect was its spiritual successor and like most sequels it did well for itself but couldn’t replicate the appeal of the original. Plastic instruments came and went and came back again, and mobile gaming seemed like it would take over the world until it didn’t. Gaming software works the same way. Mascots and fighters ruled the 90s, Doom clones and Warcraft clones clogged the PC shelves, and don’t even get me started on how many terrible Pac-Man-style maze games were in the arcades. We’ve been here and done this and know that, a year or two from now, some new Next Big Thing is going to come stomping through.

That doesn’t change the fact that each of these ideas have something to offer that standard gaming doesn’t, and VR will be no different. Motion controls got popular because Wii Sports was brilliant, but there wasn’t enough follow-through on quality for the system to retain its popularity. The plastic instrument fad would have lived a lot longer if Rock Band and Guitar Hero hadn’t first split the market and then Activision pumped out far too many games in too short a time. The hardware was sabotaged by the software, but this isn’t an issue VR has to worry about. Much. 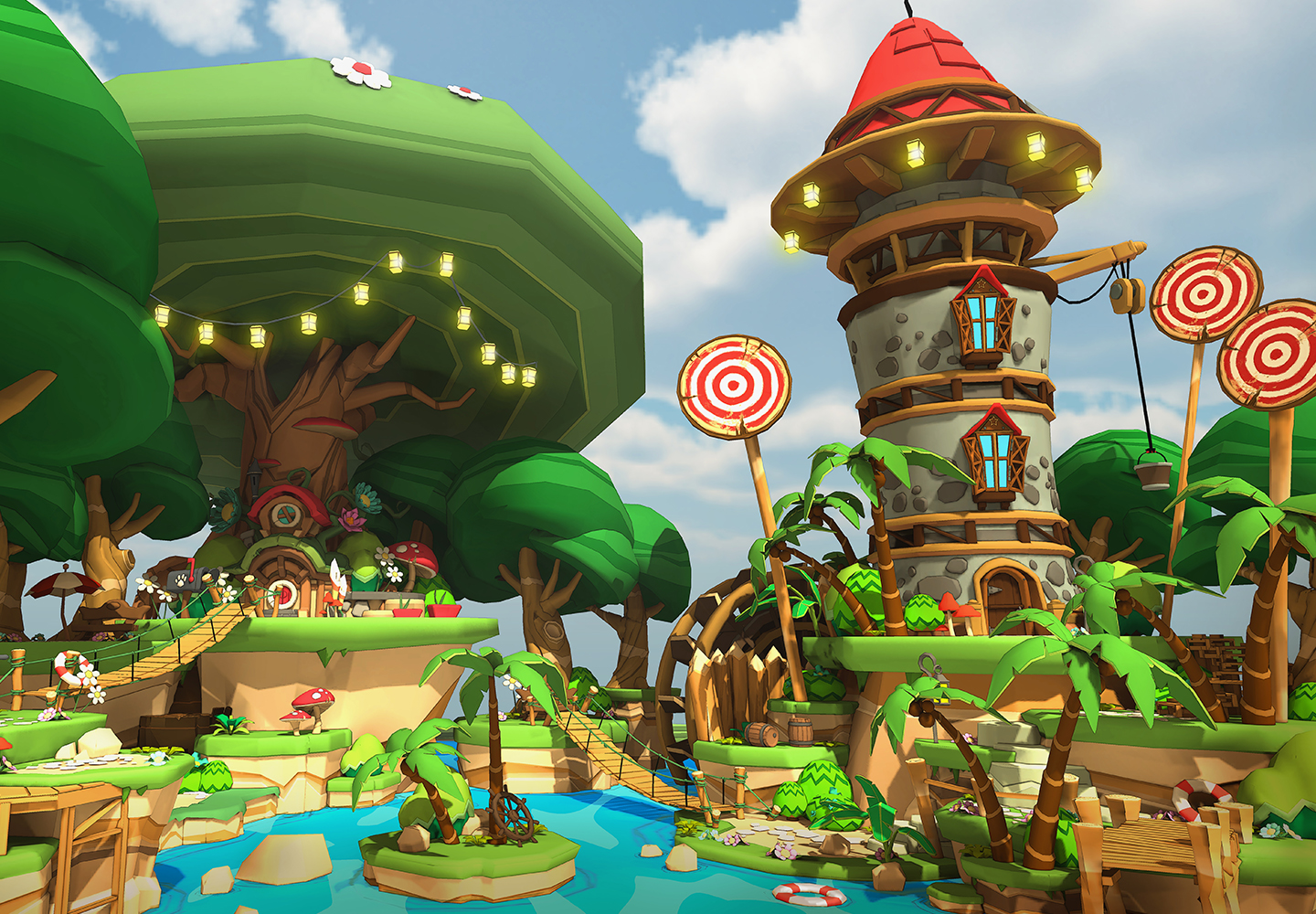 That tree in the background with the lights? On a monitor it’s a background prop. Inside VR it’s a giant providing shade to all who venture under its branches.

Take PlayStatio VR, for example. There isn’t a single game announced yet that’s VR-exclusive. It’s a feature the user can choose to take advantage of or not, depending on if they’ve got the hardware. Rez in VR sounds amazing, and the new unnamed Llamasoft game promises to be an incredible experience, whatever it turns out to be. 100 Foot Robot Golf seems an unlikely candidate for VR, but if there’s one thing VR can do it’s present a sense of scale that can really sell the idea of piloting a giant robot in a wonderfully ridiculous situation. The immersion (Is everyone tired of that word yet? Yeah, me too, but it’s the best one for the job.) makes horror more horrific, action more exciting, and the endless worlds of gaming more real. It’s only a gimmick if you actively pursue becoming jaded to wonder.

Then there’s the Oculus Rift and Vive. Much noise was made when the system specs necessary for the Rift were made public, but this was May 2015 and those specs aren’t quite so daunting to anyone putting together a gaming PC at the start of 2016. While Valve hasn’t said much of anything about the specs necessary to get the best experience from Vive, there’s no reason to believe they’re much different from the Oculus Rift- i5 or greater processor, 8GB RAM, GTX 970 or AMD 290 graphics card. It’s a little hard on the wallet, sure, but VR isn’t budget gaming. In order to get the necessary framerate to avoid getting, literally, sick to your stomach, there needs to be a strong amount of processing power driving the experience. It’s a known issue with VR’s rollout that all parties have been up front about, and one that’s going to prevent it from being as explosive a launch as its enthusiastic supporters are hoping for. 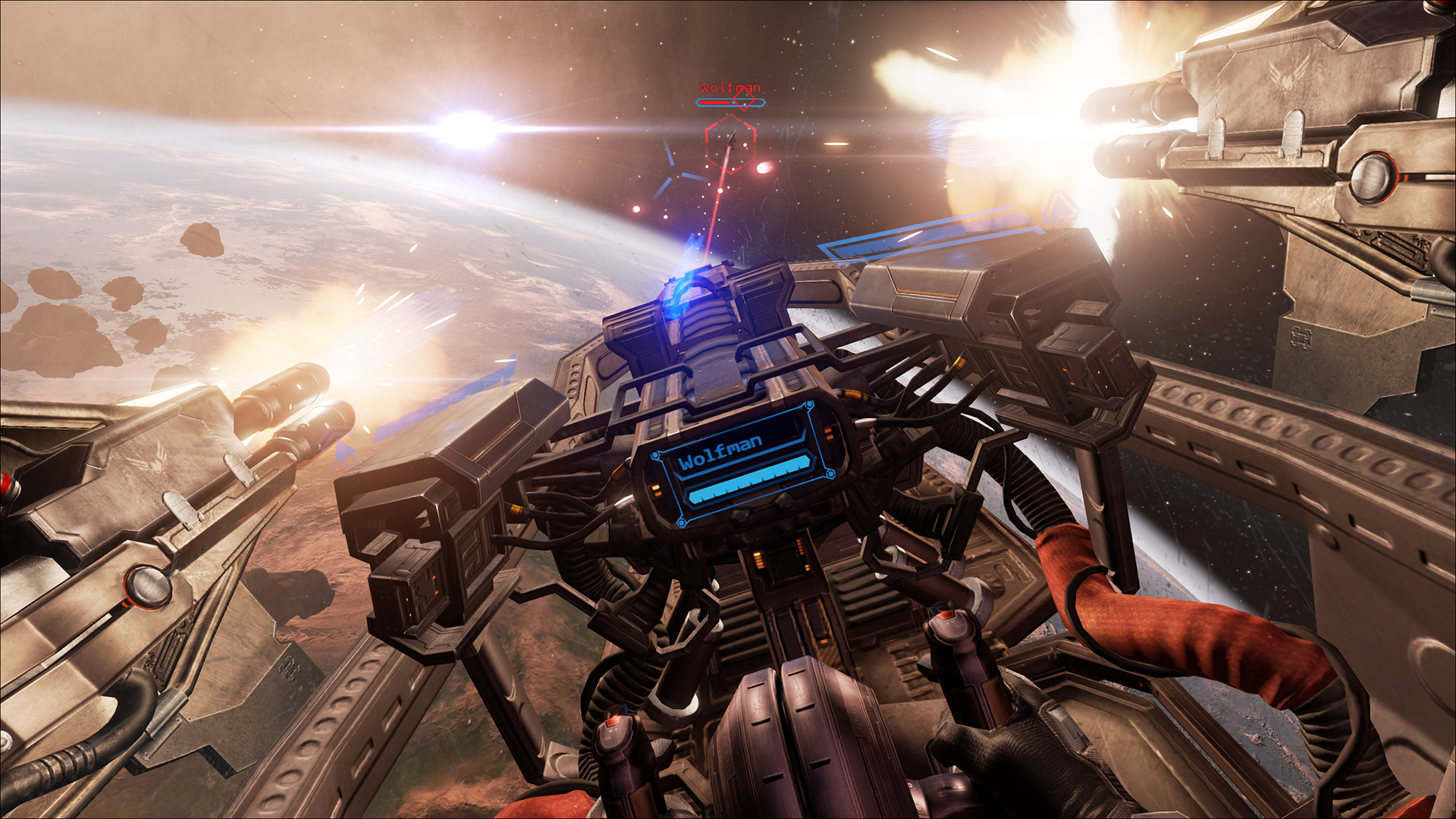 Eve: Valkyrie. It actually feels weird when you move your hands in the real world and they stay still on the control yoke in-game.

So yes, there are several problems in VR’s way, but they’re ones all parties involved are aware of and working around. Oculus is owned by Facebook, Vive is powered by Valve’s tech, and PS VR is Sony. None of these companies are naive about the obstacles in the way, as evidenced by their approaches to rolling out the new tech. Oculus made sure people knew almost a year in advance what’s necessary to get the best from the Rift. None of the PS4 games are VR-exclusive. Even the Vive was delayed to April due to an unspecified “very, very big technological breakthrough.” Both Oculus and Valve are working to make sure the VR platform remains open, with only a small number of games locked to the features of each headset and even those being left up to the individual developers if they want to expend the resources to adjust the game to the other headset. It’s a reasonable approach to an expensive tech that has the power to change the perception of gaming.

There’s been enough written about VR by now that there’s no need to defend that last sentence. It’s been said, endlessly, already. You might believe VR is the Next Big Thing, or be cautiously interested, or completely underwhelmed. What VR is, though, is a new way of looking at games, and one being approached cautiously, if enthusiastically, by all involved. My personal view based on experiencing it in limited demo form at E3 and PAX is that it’s worth the effort, even if every game doesn’t need to be experienced this way.  Eve: Valkyrie was an eye-opening experience on the original Rift DK1, and Lucky’s Tale showed me that VR has something to offer genres you wouldn’t think of as being candidates for the format.  Oddly, I didn’t really take to SuperHot in VR, despite an FPS seeming like a natural fit for the format.  VR is a tool, and one that will take skilled developers to use properly, but it’s also a tool that people have been working with for years thanks to the two iterations of the Rift hardware. 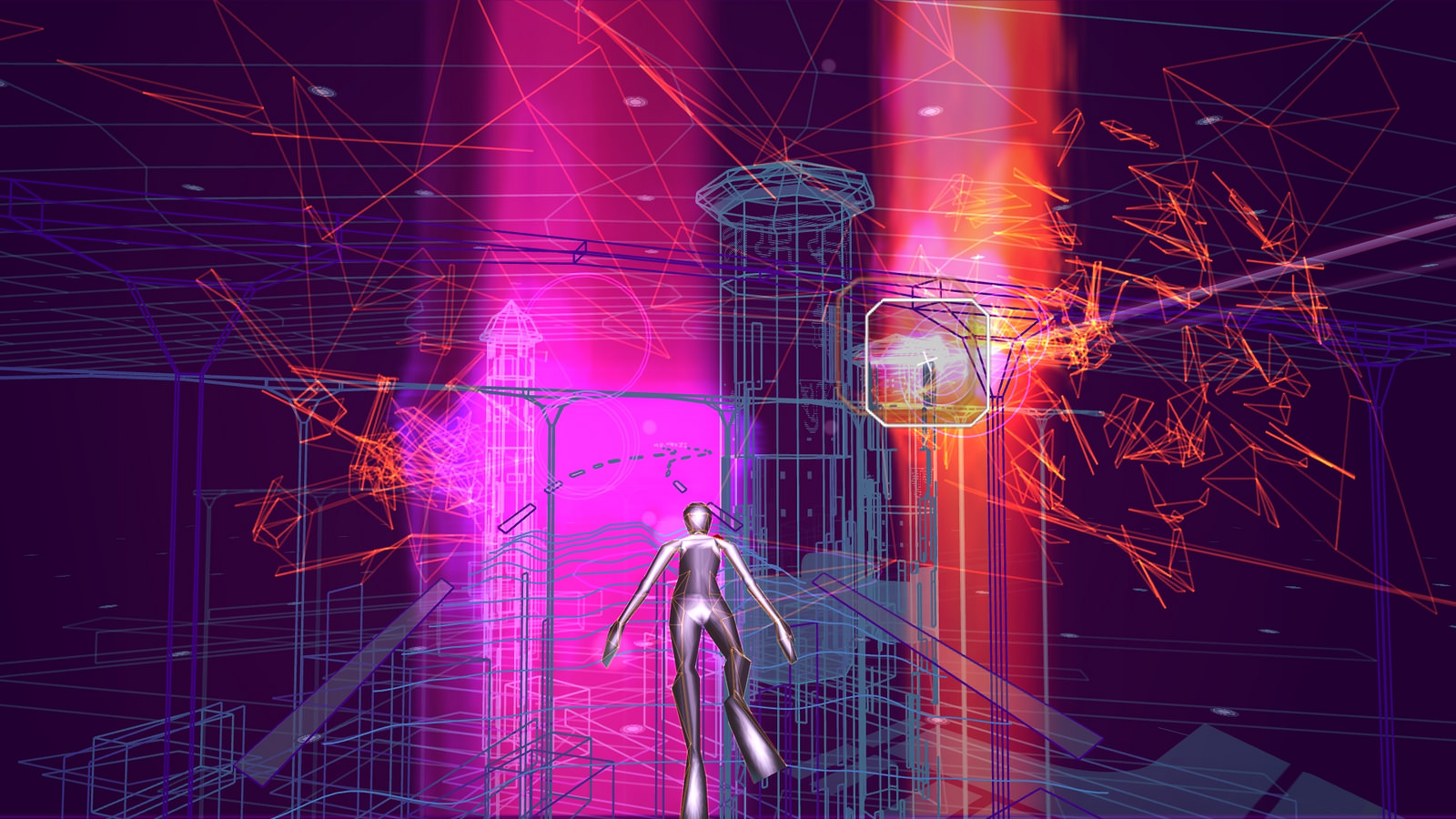 Rez Infinite. VR not required but how can you resist?

There’s no question that the development time has been just shy of forever, to the point that almost everyone is tired of hearing about it and ready for the tech to start paying off.  The Rift Kickstarter ended back in 2012 and it’s been over three years of hearing how amazing it’s going to be without actually being able to buy the final hardware.  Everyone involved has been aware that there were a lot of things to get right and blowing any one of them could mean VR fails for the only second chance it’s going to get.  That meant years of iterating and reiterating and re-re-reiterating until the hardware was actually the thing it needed to be.  It’s been a long time to hear about the promises of the future, but 2016 will finally be the end of the prologue and the actual start of VR’s story.  If that turns into a novella instead of a big fat Wheel of Time-sized series, so be it, but it’s going to be an incredible experience for those willing to try it out for as long as it lasts.