There’s a point around the ten hour mark in Tales of Arise — the point where players have just entered Menancia, the third enclosed realm of Dharna — where the game introduces the concept of Battle Chain Bonuses. The idea that, as its name might imply, chaining together successive fights out in the field, will result in higher EXP rewards and increased drop rates for items. It’s not the first game to include such a feature; plenty of RPGs prior have dabbled with the idea of encouraging players to double-down and bet their winnings on potentially grander returns, even if for something as simple as an XP multiplier. But Arise‘s inclusion of such — or more specifically, the point with which the game decides to bring it to the forefront — comes at the most perfectly-timed moment in the 50-60 hour trek. Not because, playing it, you feel a sense of relief or even appetite that combat is being emboldened by a manner of risk and reward. Or that it may be the point where you actually find yourself sprinting relentlessly from one encounter to the next. 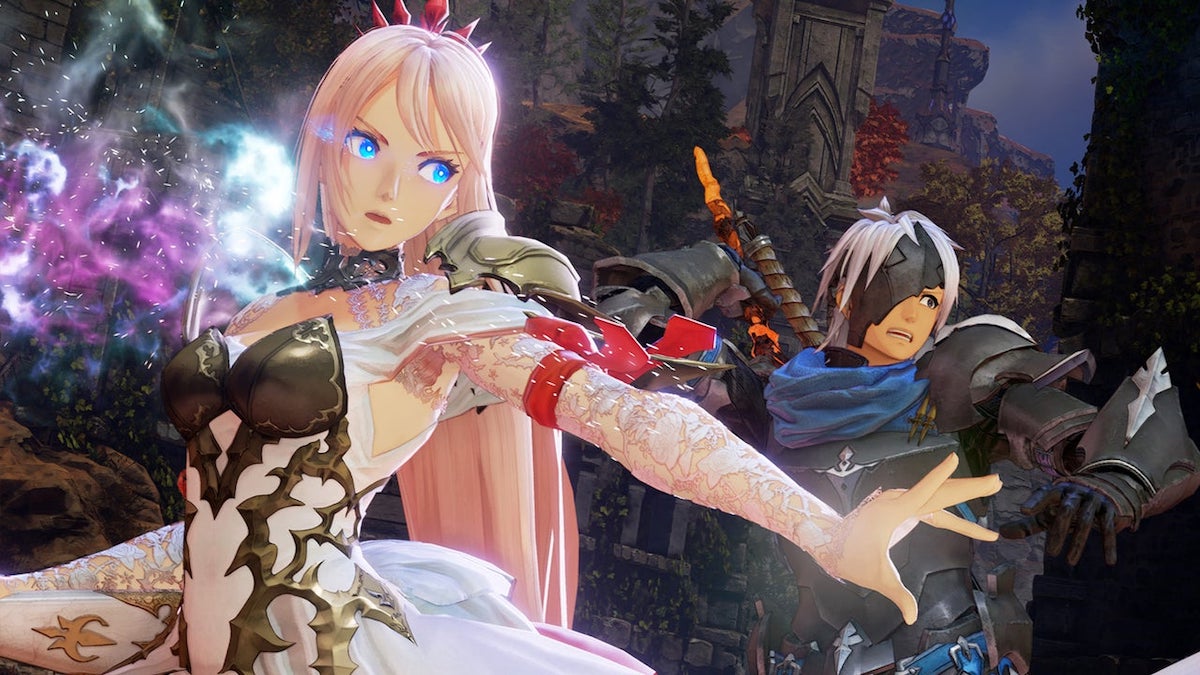 For all the incentives the game might throw for willingly sprinting from one group of foes to the next, the very desire for more encounters in such a short window of time needn’t require the lull of rewards. In fact you could even go as far as to say that encouraging players to keep fighting within a designated section of the map is unnecessary for a game like Tales of Arise. Because the mechanic is ultimately irrelevant in the grand scheme of things? No. The answer is actually far more encouraging for where and how Arise now stands in the context of Bandai Namco’s long-running JRPG series: it’s simply a joy to dive head-first into.

More specifically, how Bandai Namco’s efforts this time appear to be leaning on the excesses of the series’ real-time fixture in ways that are at times comical, indulgent, admittedly silly, but ultimately in the end undeniably worthwhile to invest in. Naturally Arise deserves the plaudits it’ll get (and already has gotten by the looks of things) for the many ways it’s shaken up — or straight up altered — the formula preceding. And yet, middling-bordering-on-disappointing past releases might’ve been, combat always did find a way to stitch the series’ inconsistency together. At best, a fine compliment to the narrative of something like Symphonia or Vesperia. At worst, a saving grace. So to see that the combat of Tales of Arise maintains the system-within-system complexity of its predecessors, now refined to a frantic, almost hack-and-slash-like foray. One that so often ends with a screen-flooded explosion of particle effects, corny character dialogue and just maybe the satisfaction that your previous personal best of chaining together 20 attacks has now increased to 30/40/60, maybe even a grand 100. 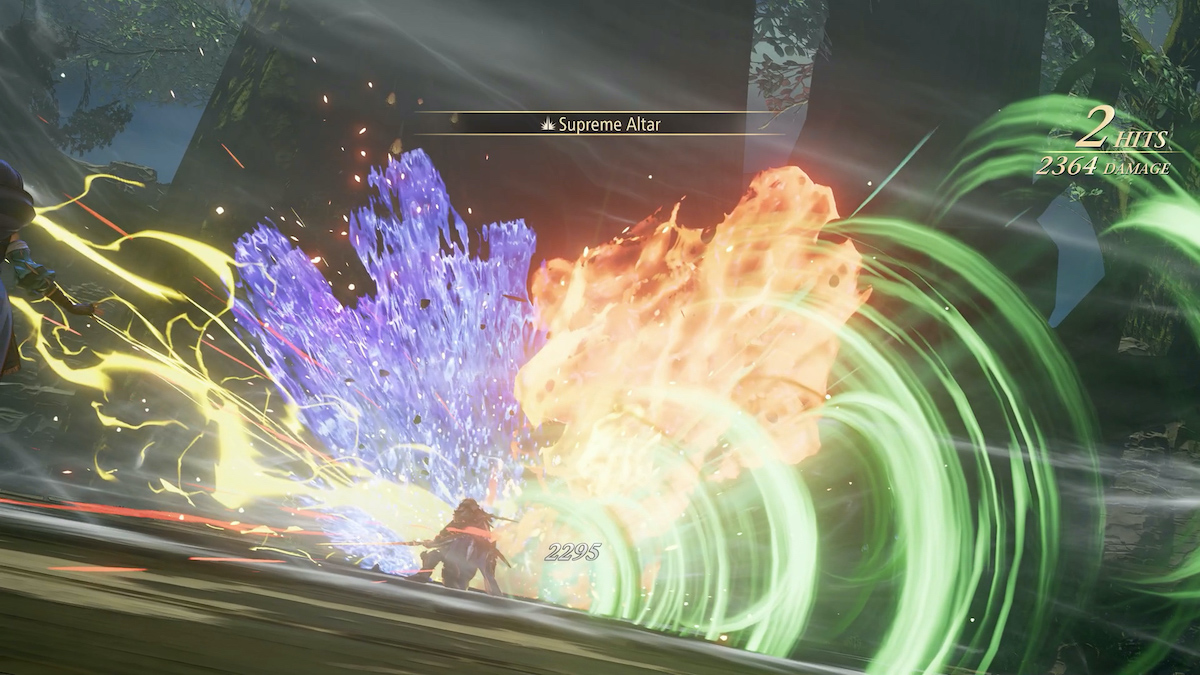 There’s a lot happening within the invisible circular boundary that is your temporary combat arena. It takes little time for Arise to go from 0 – 100 from both a visual and audio perspective. And I’m not just talking about how drowned out by character dialogue the audio mix can end up being; it’s not Xenoblade Chronicles 2 levels of worryingly-insufferable, but it’s close. Yet this is the uncanny take-away from a game like Tales of Arise. For all its admitted missteps, for all its flash and its characters making sure to call out the name of their Artes at every turn, for all the cliches, Arise‘s combat keeps you going, hopping from one troubled Dharnan realm to the next. Specifically, it’s Arise‘s newfound sense of pace where the great draw stems from.

Sure, Arise — like any good RPG — is a game whose systems are there to be learned, acted upon and even countered when the need [pardon the pun] arises. When to utilize character Artes, how to target an enemy’s weak point; who to use, when to use them. Approaching things in a surprisingly more aggressive manner (even by Tales standards) so as to charge up meters, all the while making sure not to leave one’s self wide open to some fatal enemy strike moments later. But similarly to those same highlights amidst the genre, Arise never feels like it takes its eye off the intricacies of its mechanics in favor of ever-grander spectacles and set-pieces alike. Players may be able to get by without ever delving deep, but its in combination with its pacing — and the confidence you’re likely build in chaining increasingly-longer combos — where Arise‘s deeper well of abilities, Artes and possibilities, mitigate the fear of being overwhelmed. 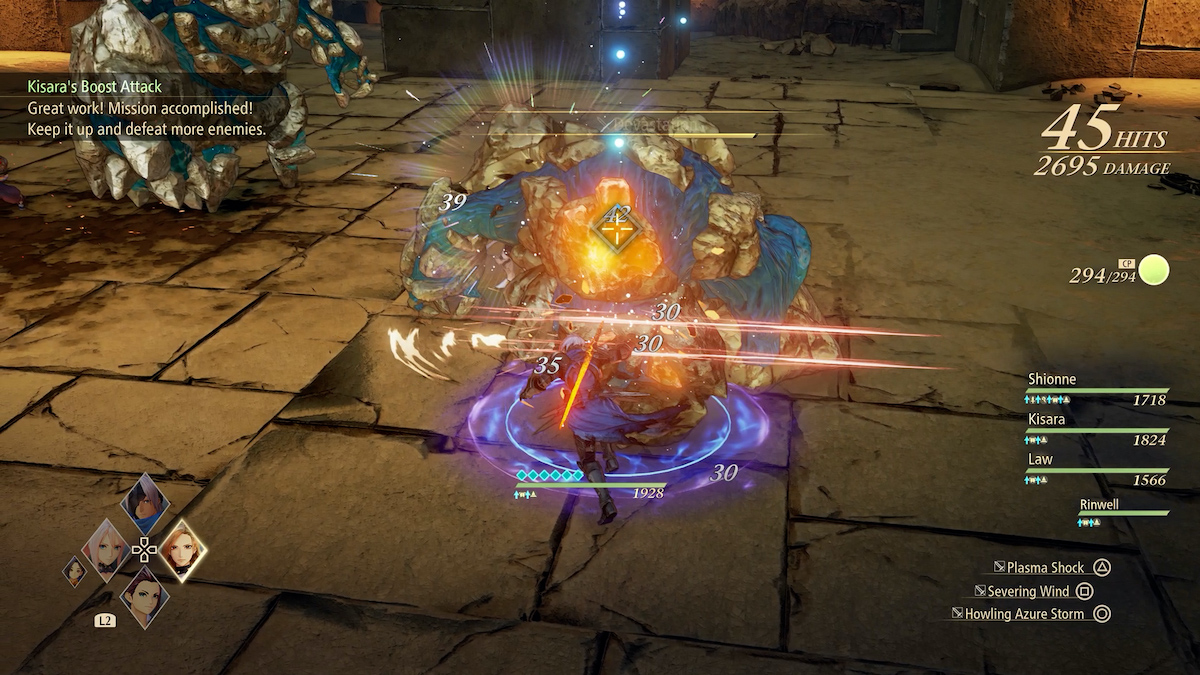 For a game with plenty of overhauls — radical or otherwise — it’s the combat systems running through Tales of Arise that are perhaps the perfect synergy of old and new, working in surprising harmony. There’s no getting away from the visual excess and the plentiful times one wonders if the game just might’ve gone too far with how much is shown on-screen at any given time, in any given frame. Yet in a bizarre turn of events, this is no bad thing. It’s thanks to the heightening the “action” component to its signature, real-time, action RPG template where the spectacle turns from a once unnecessary distraction, into a lovably-indulgent power-trip. Where the span of time between finishing one fight and starting another is not only small, but a voluntary enactment on the player’s part. It takes some doing to completely overhaul the traditions of yonder. But to repurpose it in a way that is fresh but inviting all the same? And you don’t even need the allure of a chain bonus to have it unravel in such a way; what Tales of Arise has given us here — in all its pace, presentation and yes even its laughably over-the-top stylings — just might be the series’ best.