The Neo Geo Pocket Color was something special in its time — and it was highly-regarded for having a deep library of top-tier games across a variety of genres. Now, granted, just like the mainline Neo Geo arcade and consolized hardware, you had a fighting game-heavy lineup, but there were other games to partake in as well. Platforming fans had Sonic Pocket Adventure — a remix of Sonic 2 with an in-between 8-and-16 bit art style. Shooter fans had Metal Slug, as is tradition, and fighting game fanatics had their choice of Samurai Shodown, King of Fighters, SNK vs. Capcom and SNK Gals’ Fighters alongside The Last Blade. This series gained its greatest fame up to this time period by having its sequel released to critical acclaim on the Dreamcast, and this was the first portable entry in the series at a time when a well-crafted portable fighting game was a bit of an oddity.

At this point, if you were lucky, a “portable” fighter could consist of using a Sega Nomad to play things like Street Fighter II Special Champion Edition or various Mortal Kombat home ports — offering a genuinely great portable gaming experience with the caveat being that the device was large enough to smack someone upside the head and give them a concussion if you so desired, and you had to be tethered to the wall to enjoy it for more than a couple of hours before the AA batteries died out. Thankfully, with modern hardware, that isn’t as big an issue — and the Switch’s blend of on the go and on-TV gameplay makes it a perfect showcase for formerly portable-only content like the NGPC’s lineup. So far, the ports have been just about perfect — with borders accurately showcasing many of the system’s color schemes to offer up a more authentic-feeling experience. 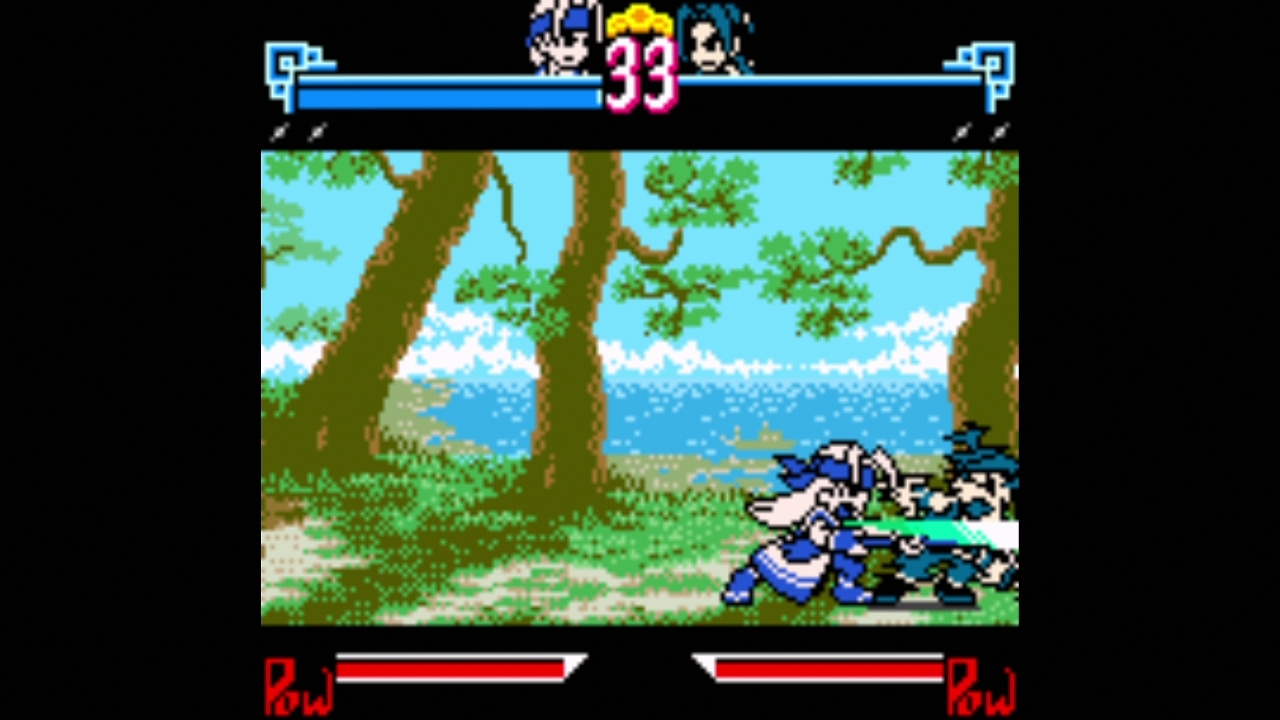 Beyond the Destiny features quick gameplay that manages to be both snappy, but also allows you to slow things down when you need to. Each character has their own weapon of choice. Some choose to use their hands and feet, while others will use things like swords — or even a fishing rod. There’s a healthy mix of short and long-range weapons thrown in, with a lance being great if you prefer to have some room. You also have the ability to use projectiles and deal out more damage from afar with the risk/reward being that throwing that projectile leaves you open if you’re blocked or they evade it. This can allow you to save some damage on your end, but can result in you taking more hits over the lifetime of the fight if you rely on it.

Ideally, you want to find a happy medium between the two. Starting off with short-range attacks can easily start the fight off strong before mixing it up with more long-range attacks. It’s important to not stay grounded though as that makes you a sitting duck. Soaring in the air allows you to attack from more varied angles and keep the fight more visually interesting as you change up your attack patterns. Attacking from the air enables you to not only land a strike quickly, but makes it tougher to take a hit unless your enemy has a diagonal attack or likes aerial combat themselves. It’s so much fun to get into a short-range battle before taking a few too many hits and then deciding in real-time to mix it up with aerial attacks to get an upper hand and then keep that upper hand with projectiles. Say you win that round and wind up doing so by the skin of your teeth — it’s thrilling and you want to keep that same feeling, but without enduring so much abuse in the process. 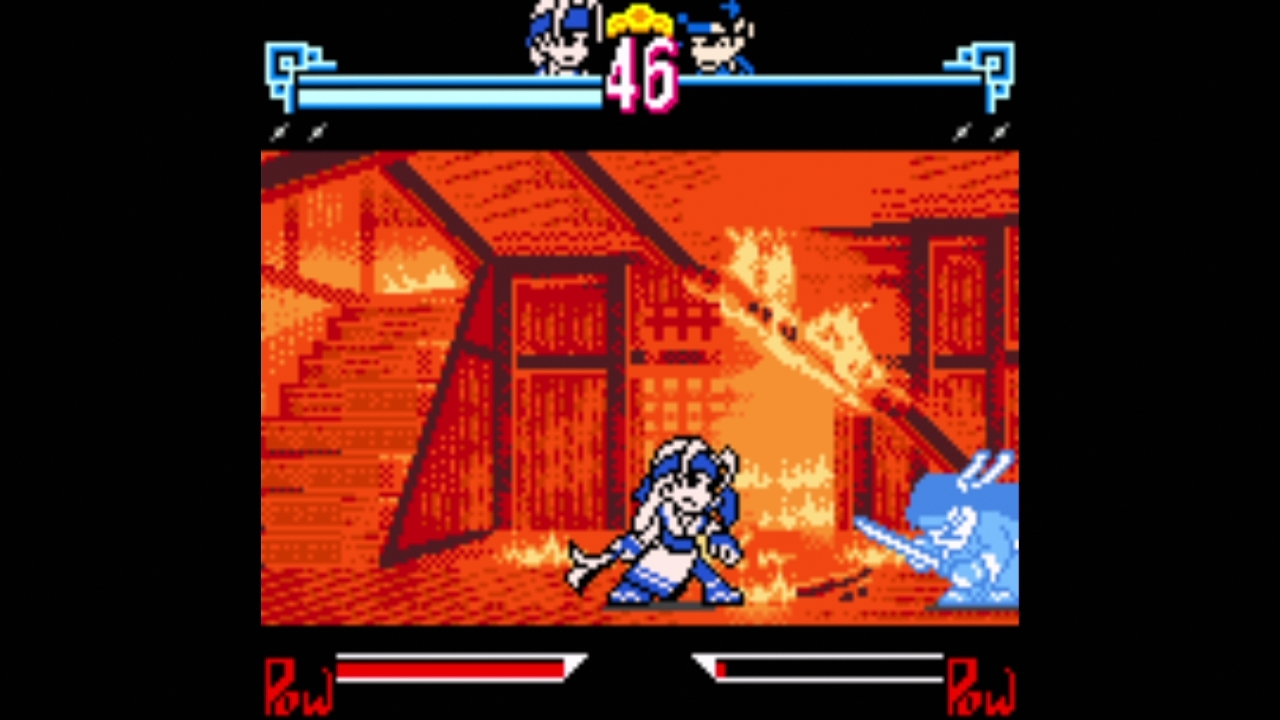 It’s a lot of fun to try out different attack patterns and while the default two-button scheme isn’t as robust as the arcade or full-on console control setups of its time, it’s impressive to see just how many kinds of attacks you can still roll out despite that limitation. One of the most impressive parts about going back and checking out these NGPC classics has been seeing just how much was done with so many limitations placed on the developers by the hardware. The roster is robust too with the full roster of the original game and then over time, some of the sequel’s characters are thrown into the mix as well. The super-deformed work allows the characters’ animation to be robust without being too taxing on the original hardware and it looks fantastic overall.

The Last Blade: Beyond the Destiny features the same overall art style we’ve seen in prior NGPC games we’ve covered on the Switch, but has slightly more ambitious designs in its backdrops. The game shows great pride in its environments by showcasing them in impressive camera pans throughout the pre-fight ritual by showing you where you’re going to be doing battle in — and there’s more going on in these stages than most others on a portable device of the time. 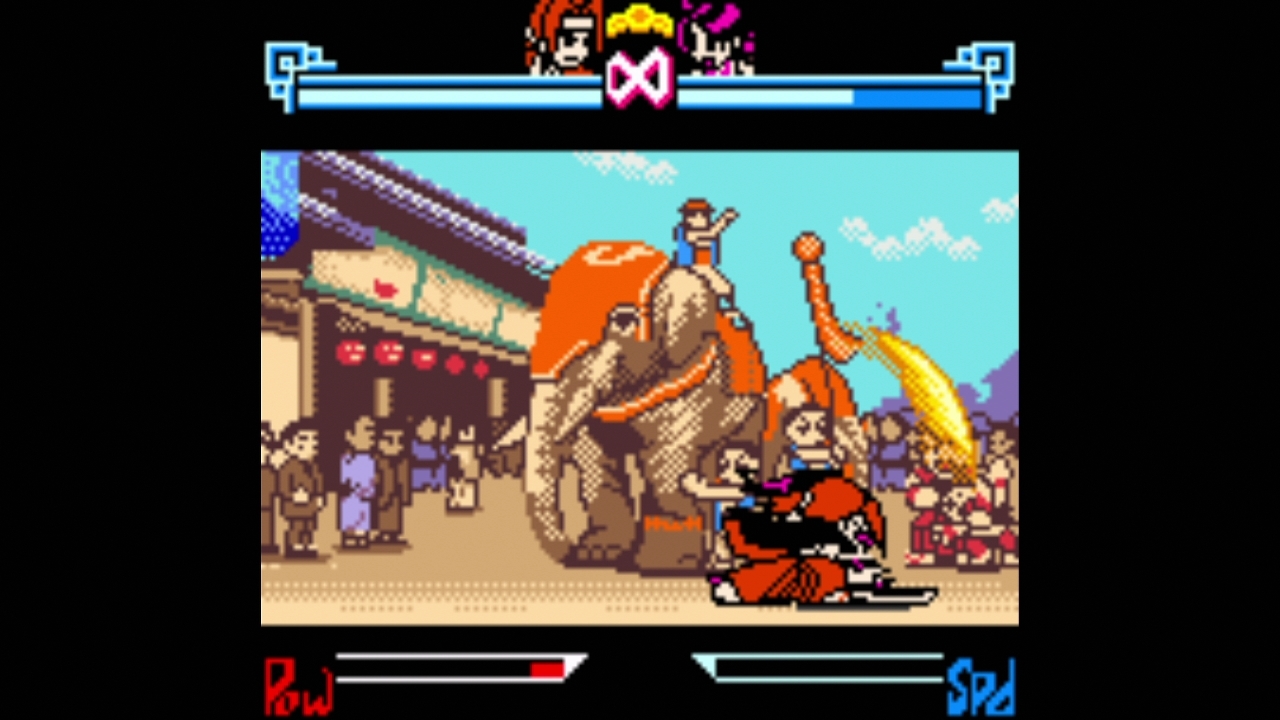 Bright and colorful areas dot the landscape — so a jungle setting will not only have gorgeous trees, but also showcase the beauty in the sky with clouds off in the distance and glistening water in the background. On the opposite end of the spectrum, you have places like a fiery area that add a sense of on-screen terror even without the flames playing an active role in the battle itself. The soundtrack is similarly impressive with chiptune versions of some of the mainline game’s best songs, although it does wind up falling short with sound effects. There aren’t many featured and they’re a bit tinny. Still, that’s the only major criticism I can levy against the game, and with twenty years of age on it, that’s impressive.

Overall, at a mere $8, The Last Blade: Beyond the Destiny may be the finest-playing NGPC game available yet on the Switch. It’s a fine-tuned weapons-based fighter that doesn’t just rely on weapons to deliver a fast-paced fighting experience. This previously portable-only experience looks better than ever on a TV and the Switch’s sharp screen is a massive improvement from the original device’s non-backlit and lower-resolution screen. The NeoGeo Pocket Color Selection has delivered high-quality content so far and much like how the original hardware was renowned for being high-quality with minimal hype behind it, these ports have flown under the radar in some ways despite offering up incredibly fun fighting experiences.