We may, justifiably so, comment on the merits (or lack thereof) of a game’s overall end product — from the first few minutes to the closing send-off — and of the greater sum all releases are comprised of, but there’s a reason why “it gets good after x hours” has become a kind of semi-meme in video game discussion. A game’s opening is a critical part to get right. Not a simple task, but one that doesn’t hold some overruling ideology with which all games can not speak against. Tone, direction, motivation, context; what should players be thinking/feeling/doing here? Is your intent (as the developer) to teach, to remind, to indicate? It’s a lot to think about, long before things even really get going and in the worst case scenario, should you get it wrong, you risk losing many’s interest, those select players signing out before they even get to the real meat of proceedings.

While some series have delivered their own share of, shall we say, “unexpected” openings from Metal Gear Solid 2’s bait-and-switch to Kingdom Heart 2’s daily ramblings of a completely different, unrelated (at least that’s how it seems) protagonist, Metroid is perhaps one of the few established names in video games that tend to deliver on the idea that an opening has to be, if not substantial, memorable or resonate with the greater tale being told. One of its greatest accomplishments is its opening passages and how each and everyone isn’t afraid to do things a little different albeit still making sure to keep close enough to the referential standards of its genre template.

The original’s immediacy; the Game Boy sequel’s surprisingly upbeat-then-ambient withdrawal. Then there’s Super Metroid and I’ll go on record right here and now and state this to be, in one’s opinion, to be one of the best openings to any video game, period. The unsettling, dark-ambient soundtrack, the awkward silence of Zebes minus the thunder and pouring rain, retreading the final moments of the original game which lead into the opening moments of said game, the sudden reactivation of hostility thereafter. Brilliant, but how on SR388 do you top that? 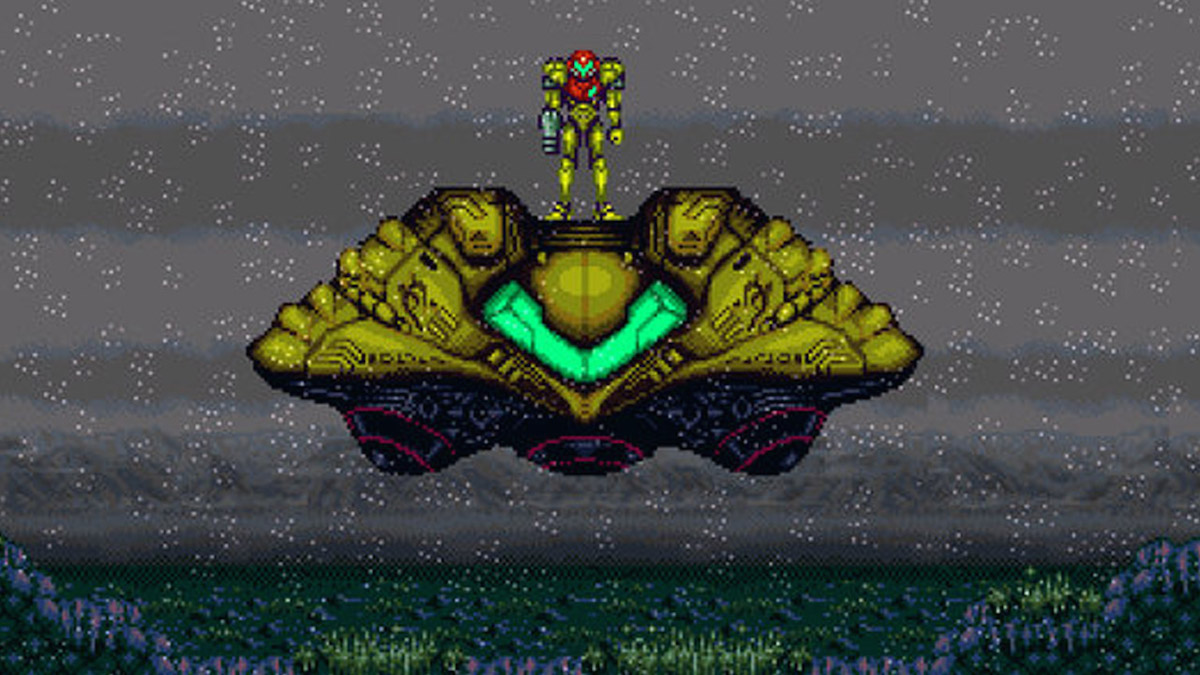 Well, the answer is: you don’t. You instead offer an alternative and decide against fretting over the legacy and reputation of the games previous. The thing I (and many others) love and respect about the Prime trilogy is how it balances the supposed “old” with “the new.” Retro Studios did what so few developers manage in that they expressed a balance between admiration for the series prior, but confidence too in the notion that this was a Universe they could add to. Past lore was referential, rather than mere nostalgic distraction. New locations were added to, back-story was fleshed out and if there was anything that was reused, it was contextualised and reimagined for the purpose of the tale trying to be told.

This approach was ingrained into the opening hour-or-so of 2002’s Metroid Prime and while it wasn’t a dramatic inverting or flipping of the series’ conventions like Super was, Prime was aware that it had to present things in a different manner, all the while inheriting the almighty weight of an iconic IP such as this. But they delivered; for one, Samus Aran wasn’t investigating a distress call from, say, the Galactic Federation or a Federation-affiliated group, but from the Space Pirates themselves. On a frigate orbiting the then-unknown planet Tallon IV. You could tell Retro wanted to inject the same kind of weary, anxious treading through one’s surroundings a kin to Super Metroid with the Frigate’s dark, damaged and industrial interiors. The Space Pirates, formerly the main threat and one that littered former 2D corridors and vertical chutes alike, lay scattered across its many floors. Scan logs going into detail of the numerous injuries they’d suffered from broken spines to ruptured internal organs — some even holding just enough consciousness to still “attack” you on sight, despite their injuries. 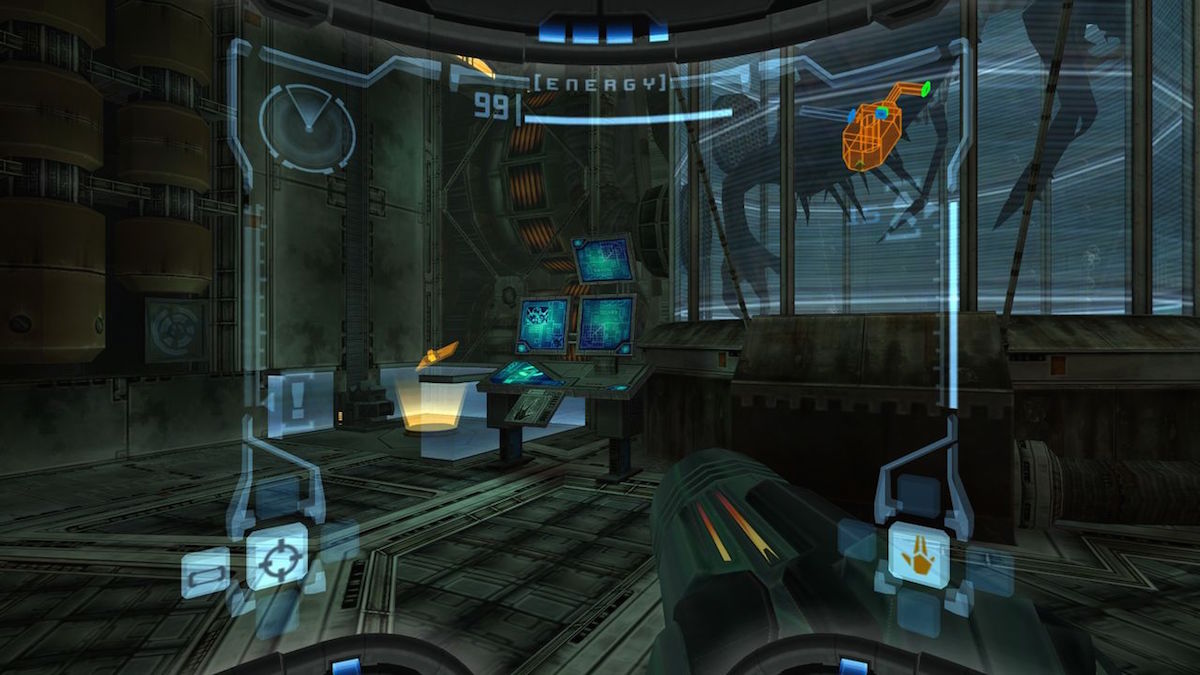 The concept of Phazon hadn’t even been mentioned yet, but already Prime had once more given Metroid fans a unique but still series-standard, unsettling opening without giving too much away of the main bulk of content that was yet to be delivered. Story-telling via its environments, show don’t tell. Prime had translated a 2D affair into 3D space with relative ease and a sleek delivery to match. Likewise, Prime 2 and Prime 3, while less focused on the atmosphere and the personal, emotive response its environments can generate, did at least explore more of Samus’ relationship with affiliated parties à la the Galactic Federation and other fellow bounty hunters without devolving into unnecessary monologuing (as if the series would ever do that, huh?). As well as, lest we forget, introducing — or reintroducing in Prime 3’s case — the main threat, Dark Samus, without spelling it out for us. Its cutscenes doing a terrific job at illustrating the severity and menace these antagonists brought.

They set the stage without, again, going into too much detail and provided but a glimpse into the breadth of that planet’s history preceding Samus’ arrival. The scan-enabled lore of both games, once more, providing some great backstory on fellow alien civilizations’ struggles and the resulting victories/defeats that occurred. You could argue that for some games, Prime 2 and 3 specifically, a certain degree of alienation and discovery was perhaps skewed a little — lost, if you really want to be critical — in favor of something more cinematic, theatrical, story-driven. After all, there is some sense of loneliness lost in Prime 3 when you know that a fleet of Federation ships is relatively nearby to the planet you’re currently exploring. At points, providing direct orders, even checking up on you along the way. 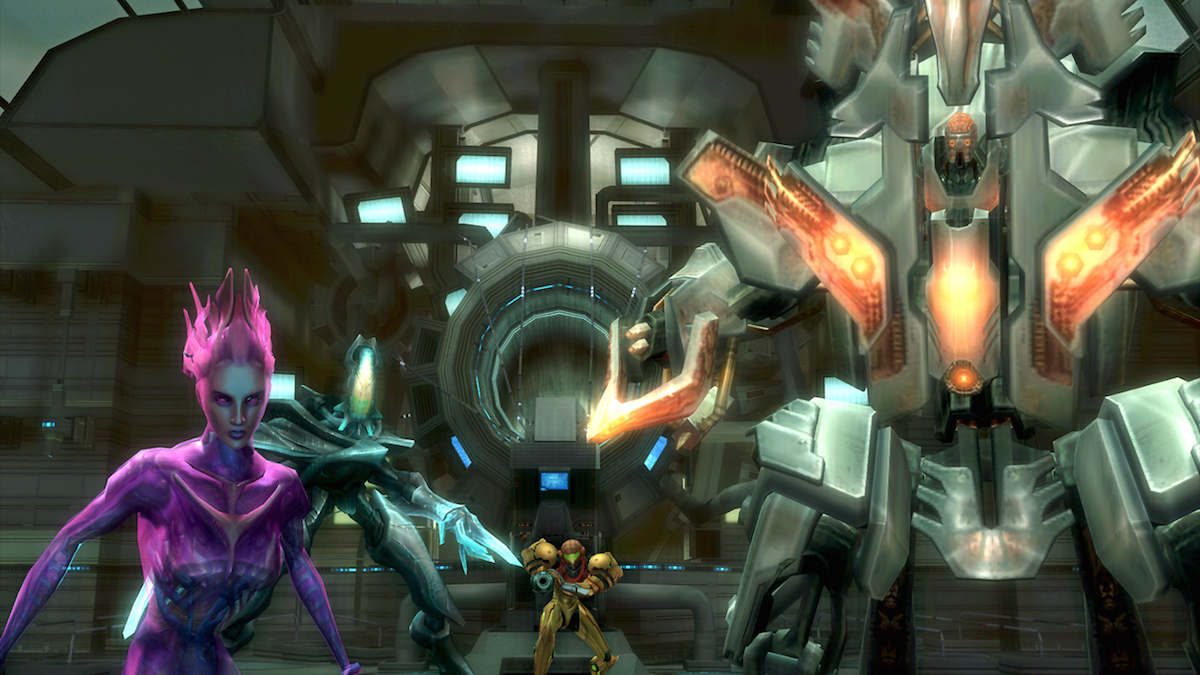 Regardless, what these games did right on, again, was providing another window into the relationship that Samus Aran had gained from her reputation as both a bounty hunter and an individual whom the Federation could rely on. Prime 2 showed Samus as one, though immediately conservative on an alien presence, did at least show remorse in failing to help the now-deceased troops. Prime 3 offered momentary examples of Samus’ glowing reputation among Federation members; “aren’t you Samus Aran? It’s an honor to meet you.” while at the same time signalling that she wasn’t the only competent and trust-worthy hunter in the galaxy. Which, again, is countered by the events that unfold, further solidifying Samus’ position as someone who’s able to get the job done, even under difficult and strict circumstances.

The Prime trilogy moved away from the conventions of the series in their own little ways, but in the end, all managed to make each one of its entrants’ appealing without straying too far from the internal logic and rules the series was rooted in. It needn’t matter if Samus was there purely by herself or as assistance for a larger military group, each one of these three games attracted you many-fold. Its aesthetical design, its progression, its careful attention-to-detail, its remarking on past series events without beating its players over the head with it. And for each one, we’re only around one, maybe two hours into proceedings. 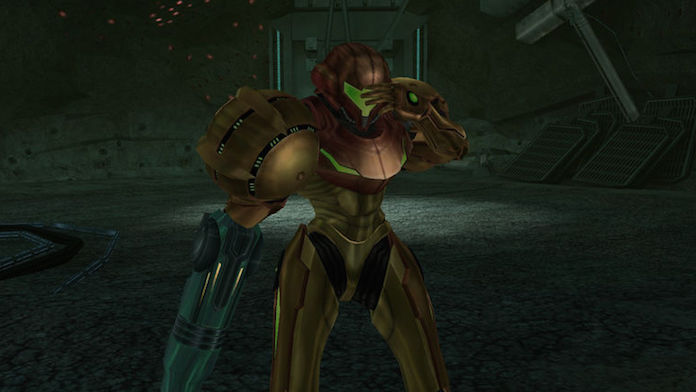 It’s for these specific reasons why Metroid Prime 4, undeniably, needs to nail its opening. Not because it’s an all-or-nothing affair — that without it, the game is fated to fail — but because the series has consistently done a great job at providing a means and a reason to care beyond the opening act. To keep going, to see this story through to the end and to come out triumphant. We still don’t know the premise or indeed the backstory as to why Prime, least for now, is a tetralogy in the grander Metroid mythos — and why Nintendo would lean back on Prime’s sub-titling — but one can only hope the eventual game’s introduction lives up to the brilliance of the series’ many outings. Gameplay, exploration and music (for the titles alone) aside, Metroid has crafted more than enough fantastic openers to have it be the series’ fourth and crucial pillar.