Idle games are not, as they may first appear, complete skinner boxes.  They’re actually skinner boxes tuned to numbers, eventually turning into equation maximization games once you get familiar with the underlying systems.  Games like Clicker Heroes understand this and tune the experience around relentlessly rewarding players who take the time to figure out what the numbers mean.  Sakura Clicker, on the other hand, is merely about patience.  Whether you pay attention to its systems or just bang away all day long, you’ll perform roughly the same in the long run.  That’s not how any game is supposed to work, and it’s a problem that even giant-boobed anime girls can’t quite overcome.

There are two primary things wrong with Sakura Clicker’s basic structure that prevents it from having any long-term staying power, and a few other, lesser issues as well.  The first major issue is it’s progresson.  To explain this properly, however, it’s necessary to back up a bit and explain some idle-game basics-

At first there’s just your hero, doing a set amount of damage per click.  Leveling her up by spending the gold dropped by defeated enemies makes each click a bit stronger, and pretty soon you’ll be able to hire your first follower.  Every follower you hire reveals the next one available, expensive beyond the current level’s wildest dreams but immensely powerful and worth saving up for as you advance.  Each bought character adds to the overall idle damage per second (DPS from here on), meaning if you walk away the monster-girls are still being defeated and progress is being made.  As the game progresses they get more and more powerful, so if you aren’t regularly checking in and powering up the latest member of your army or hiring someone new, you’ll eventually slow down and finally stop as a timed boss gets too much for your underpowered army to handle.  When that happens the game backs up to the highest level before the boss and pauses there. endlessly taking out random enemies and adding the gold to your growing stockpile.  What this means is that, quite literally, time equals money.  The real currency becomes the length of time it takes to earn enough cash to buy the upgrades necessary to defeat the boss. 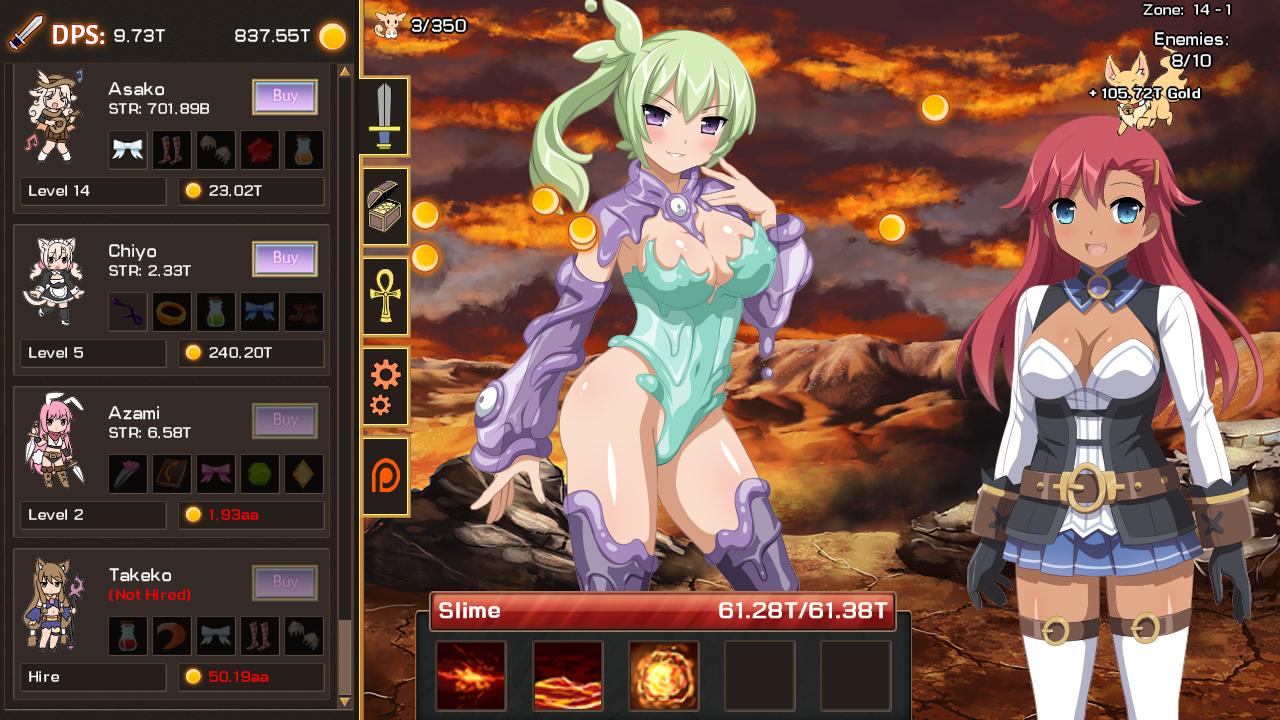 The problem with Sakura Clicker’s progression is that it’s based on an additive formula.  In an average idle game, leveled-up characters get new skills that increase your effectiveness, and that’s true to a point in Sakura Clicker as well.  Unfortunately these skills are additive rather than the standard multiplicative, and the game isn’t really tuned in the later levels to work with this.  Take one of the more common skills, which is a 25% bonus to earned gold.  When you’ve got no followers you’re at 100%, so 100 gold = 100 gold.  That first 25% bonus means what would have been 100 gold is now 125 instead, and here’s where things start getting tricky.  The next time you level up a character who has that skill, that 100 gold will now be 150 gold, which is of course 100% + 25% + 25%.  It’s nice enough for the first couple upgrades, but the additive nature quickly means the bonus gets less and less worthwhile.  When you’ve had ten bonuses of +25% apiece, what that means is 100 gold becomes 350.  The +25% gain from 325 to 350 is also only a 7.7% increase overall, and the overall percentage only gets smaller each time it’s added on.  If it was x25% per upgrade, that same pickup would be 931 gold.  In a game that’s tuned for a constant increase in difficulty there’s no problem with additive rather than multiplicative progress, but Sakura Clicker has the same near-exponential increase that’s the genre standard, and the character upgrades don’t take this into account.

Sakura Clicker’s other major problem is also tied to follower abilities, and also math-based.  Remember, money is time is money (can’t stress that enough), so the real currency of the game is how much time it takes to earn enough cash to upgrade someone.  Therefore, a decently-balanced idle game will make it so that, if you’re spending X gold to max out a character, the effort will at least be semi-noticeable.  Getting a bonus of 2000% DPS on a character sounds like a great payoff for their final ability, earned at level 600, but that money is always, every single time, better spent on leveling up your highest-powered character.  When DPS is being measured in octillions and the final upgrade of a character, costing as much to earn as a new level for the most effective member of the crew, only increases their DPS to a few quintillion, that’s more a rounding error than any effective level of support.  Not every crew member is going to have equally useful abilities, of course, but it would be nice if any of them were worth leveling up once you’ve earned any gold, DPS, or click-damage bonuses they may have. 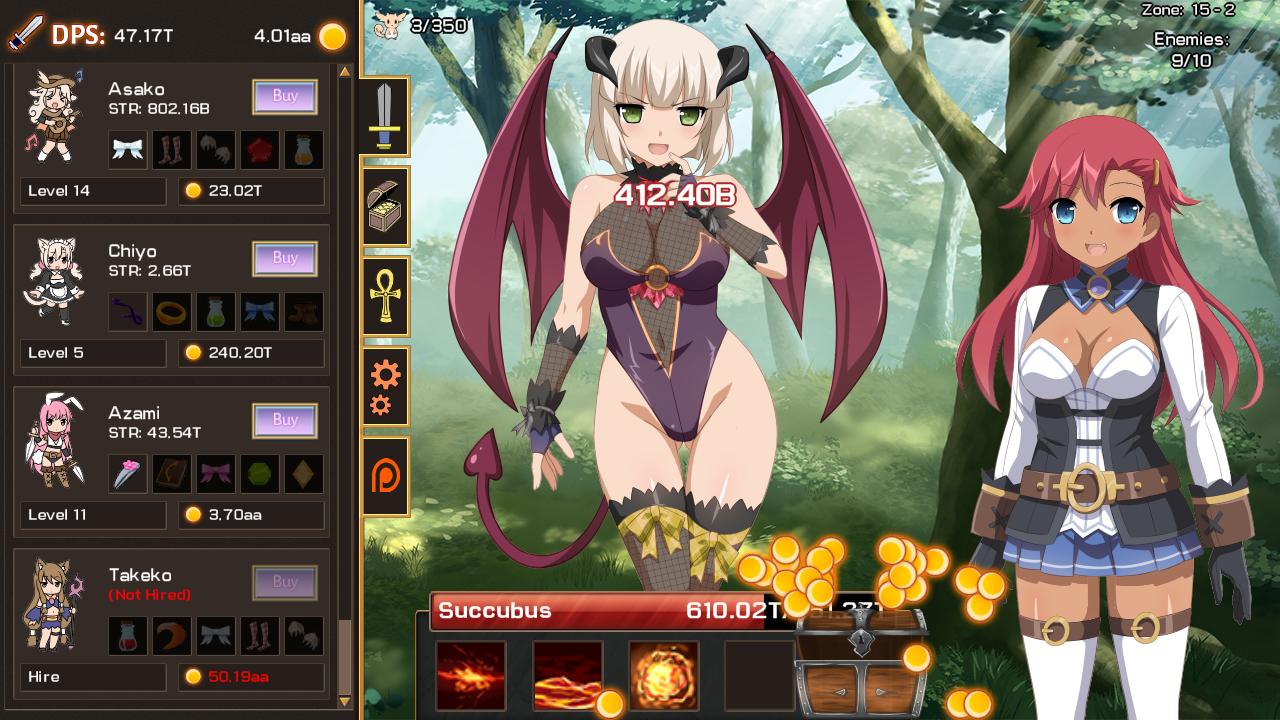 Idle games are background activities that you only check in on once in a while, sometimes clicking away a particularly troublesome boss and allocating money into power, so patience for the long haul is just part of the experience.  Eventually patience breaks, though, and that’s when, like in Clicker Heroes, you can start over but with the ability to power up a little to make the next run easier.  I think of it as a wall, where you start running up a hill and the power-ups bought at the start add to your overall momentum.  Eventually the hill becomes steeper and steeper until it’s a solid wall in front of you, and you can either wait for incremental progress or start over again, faster and more capable of handling the terrain.  Like with the character level-up bonuses, however, these abilities are also additive, meaning progress on the next round is generally only a little farther than on the first attempt, and if you’d just waited a little bit more you could have cleared the same section the first time.  What’s the point of replaying if you’re just doing the same thing over again, a tiny bit better?

Also, and this doesn’t really fit anywhere else, it doesn’t help that if you click fast enough the game can’t calculate DPS at the same time.  On a difficult boss you can either let the followers handle it or click like mad, but not both.  Additionally, the damage calculator runs each follower individually, and you can see the health bar move down in a regular, rhythmic spasm of decline.  Most likely what’s happening is that the fast clicks of your manual attack are overriding the application of the individual follower attacks, which doesn’t seem like a thing that should be happening. 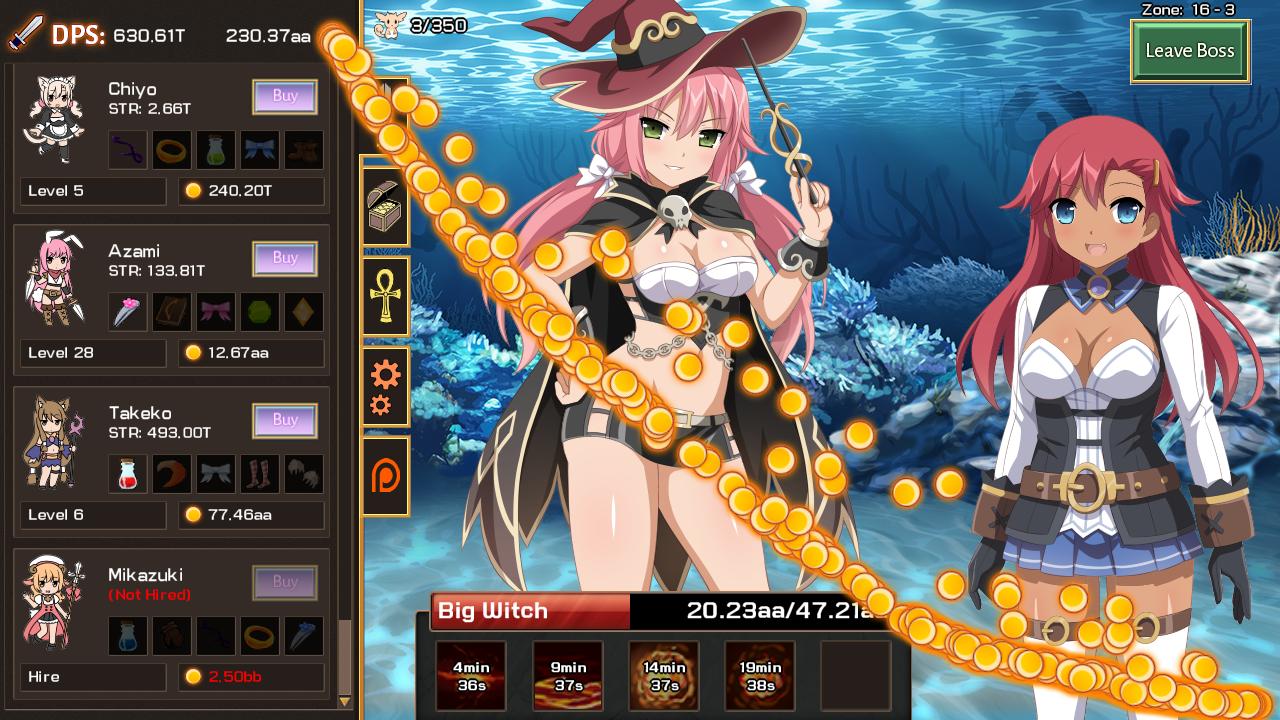 The thing about Sakura Clicker is, of course, that it’s all about the anime boobs.  The game lives and dies on this one feature, and to its credit the art and character design are very good, if maybe a bit on the impractical side of fan-service.  There are a good number of basic monster-girls with a large number of varieties in hair, clothing, and coloration, but why not just head on over to Deviantart if that’s all you’re looking for?  Sakura Clicker is still in its early days, sure, and upgrades over the coming months will add new features and change things immensely.  After the post-launch tweaking, though, the only major updates have been paid DLC outfits for the main hero.  Real-money cosmetic items in a free-to-play game are perfectly fine, because a developer has to eat, but it would be nice to know if a game of Sakura Clicker’s popularity will have its structural flaws addressed.  There’s no reason at all Sakura Clicker’s issues can’t be addressed, making the idle gameplay live up to the art.  At the moment, once you’ve made a run through level 30 or so, there’s no reason to return to the game, and without addressing the underlying math that governs progression all the new anime-babe art in the world won’t be enough incentive to return to an abandoned game.