Assassin’s Creed Origins is the newest installment of the long-running franchise, and after taking a year off from bringing a new entry into the series proper with the stated intention of bringing some rejuvenation to the franchise, Ubisoft has created some expectations with this entry. Our thoughts on this highly anticipated title can be found in our review and it’s accurate to state that Assassin’s Creed Origins takes place in an enormous world and the amount of available activities may be overwhelming and especially daunting if this is a player’s first time using the Animus. The following are some basic tips for players to bring with them to ancient Egypt to maximize their enjoyment with this title. 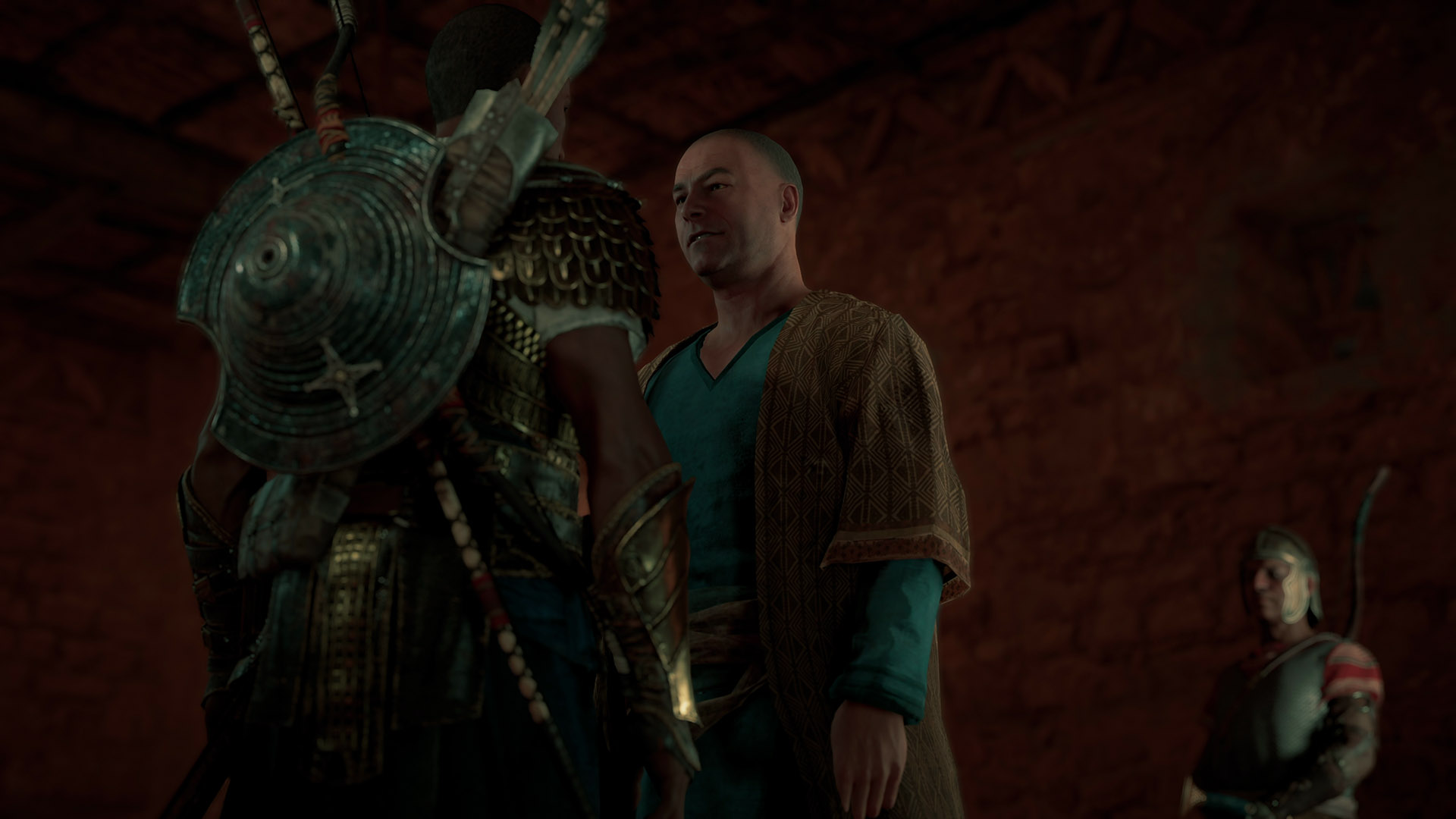 No need to rush

Jumping in and plowing through the story is tempting, but there is so much more to do than just the main campaign’s storyline. A great deal of work went into recreating ancient Egypt and the effort paid off in creating a very detailed and intricate living world with many secrets to discover. Exploring the three great cities, excavating the pyramids, viewing the wildlife in its natural habitat or just enjoying the scenery in the barren desert and lush oasis is a worthwhile past time in itself. Senu is a great resource for this, as that falcon not only provides a great view of Egypt but is also quite useful in tracking quest objectives. Be sure to Synchronize with Senu often, since doing this will make the avian companion more useful at spotting objects of interest. While this doesn’t come out until 2018 as part of a free update, be sure to explore Egypt without having to worry about enemies attacking you with the Discovery Tour. 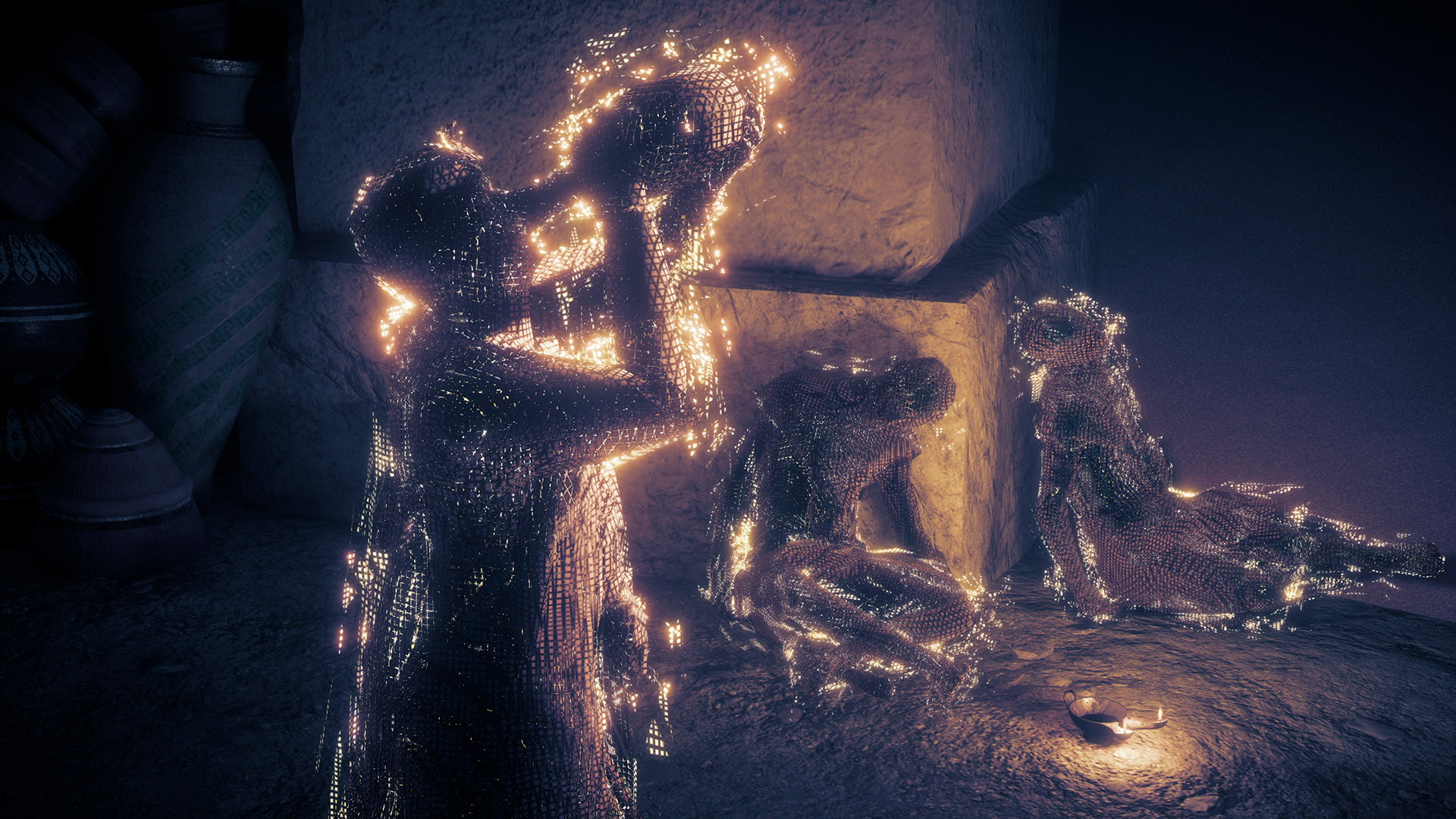 Use the Animus Pulse often

The drawback to having such detailed environments is sometimes there are treasures and key items hidden in plain sight. Using this ability highlights all points of interest, which can be used to collect loot, locate enemies to formulate an attack plan or reveal where a hidden door or other key secret might be for advancing a mission. Searching for things the old fashioned way is always an option, but using this trick can speed up the process or reveal things that would otherwise be looked over. This is especially helpful when searching for items underwater. 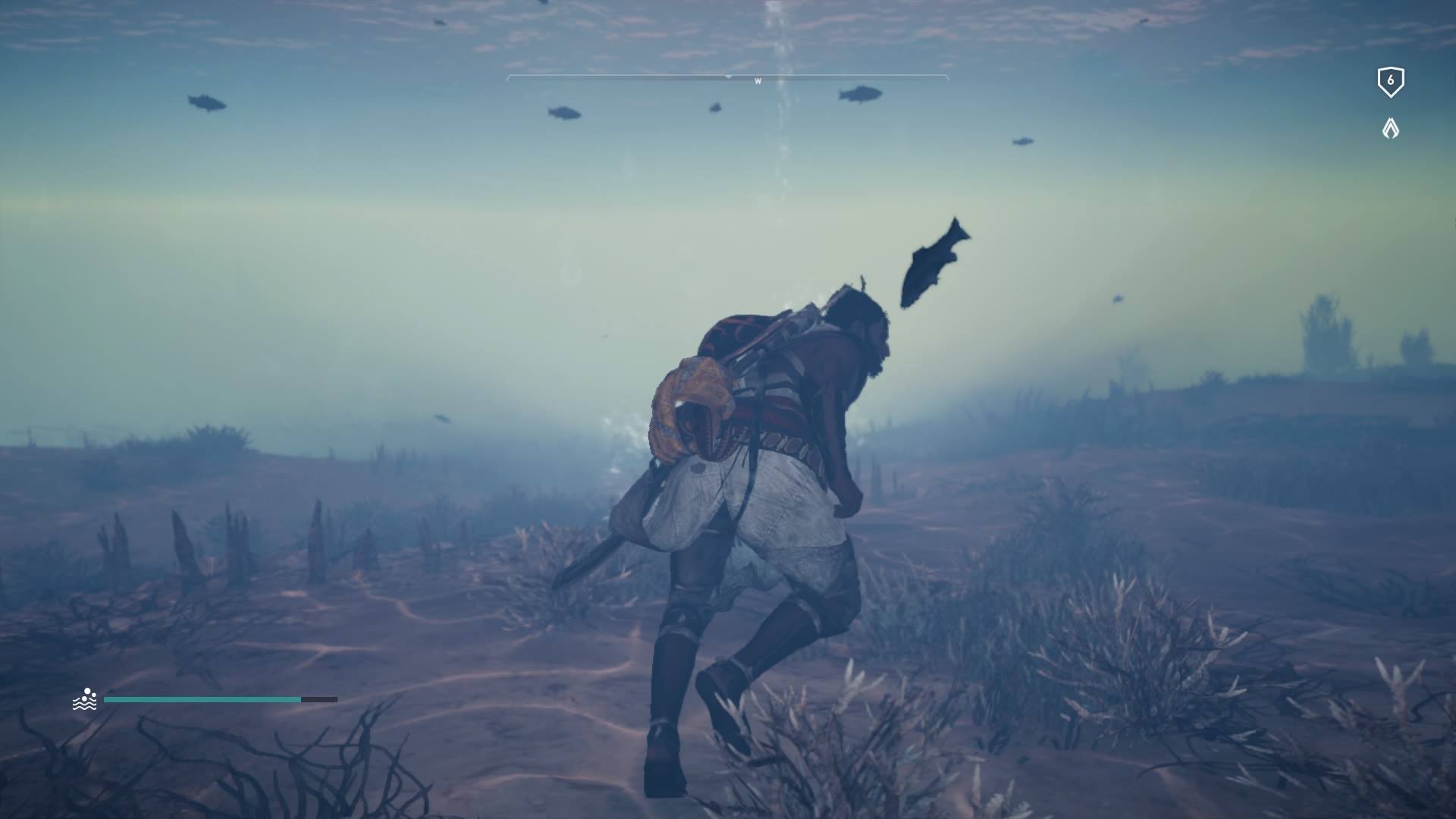 Animals are your friends

Technically they aren’t, unless you live by the adage the enemy of my enemy is my friend. Most missions have a single objective that must be completed but there is more than one way to achieve it. Sometimes it’s fun to lurk in the shadows and stealthily pick off enemies and other times you might want to charge in guns blazing. A third option that is sometimes available is to hide in the shadows and create a state of pandemonium by letting lions and hyenas out of their cages. A cautionary warning with this method is these beasts sometimes get Stockholm syndrome and will attack their liberator so it’s a good idea to find high ground soon after springing the cage. An even better approach is shooting the lock off from a distance with an arrow. Get a few of these animals out and engaged with fighting the guards and Bayek is free to move about the area to fulfill his objective. 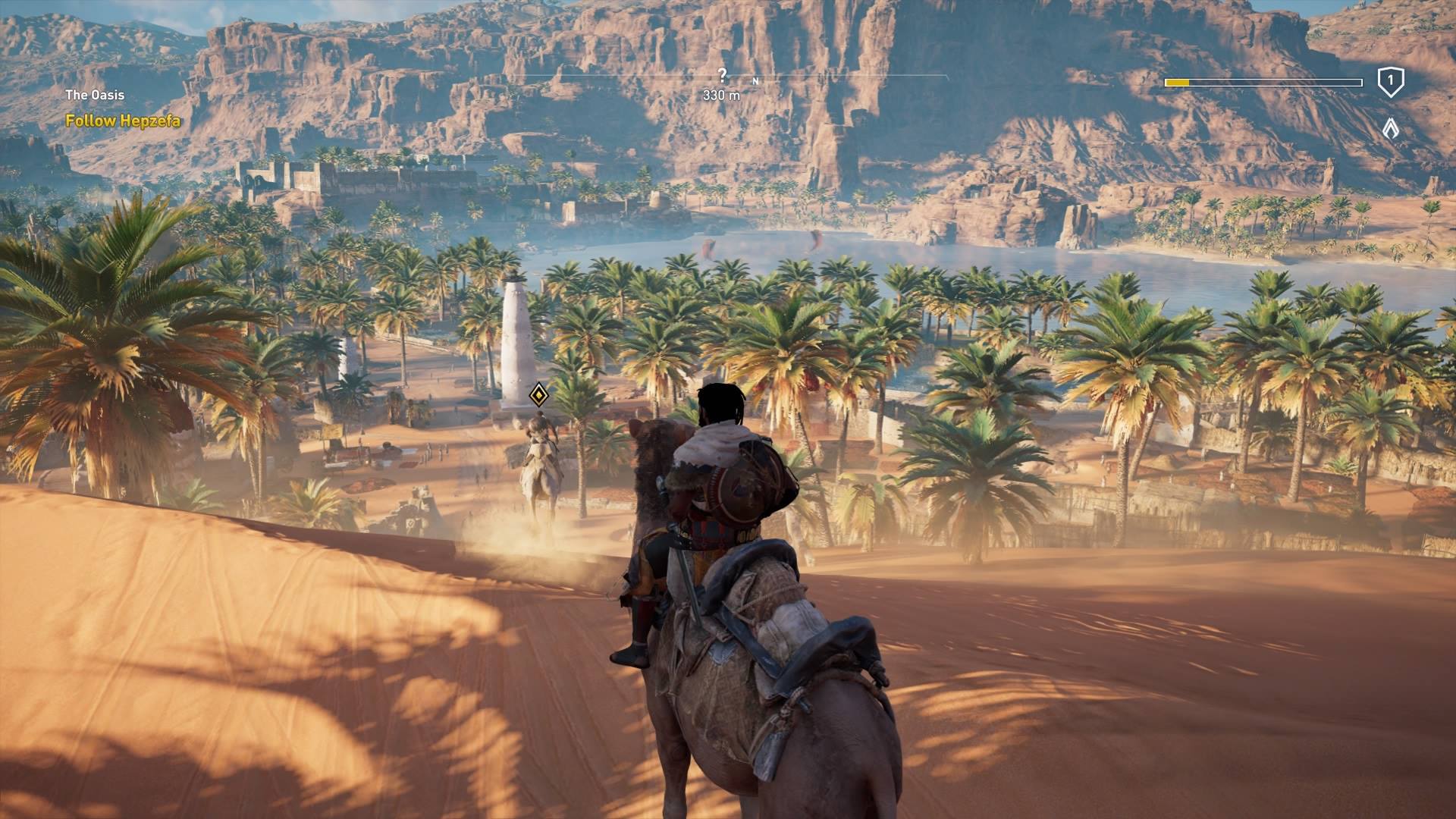 As the last Medjay, Bayek is a straight up badass in combat, but he doesn’t do too well when he fights above his weight class. When dealing with enemies that are over two levels higher than Bayek the odds become extremely skewed against him. They will take over a dozen hits to take down while Bayek can only survive two or three hits. To test one’s mastery of the combat system, taking on a high level opponent is a fun way to gauget one’s skill and feel pretty satisfied if they succeed. It can be a grueling battle, but not impossible. However, pulling this off works better against one, maybe two opponents. When you get five or more in battle skill and reflexes start to become irrelevant because while Bayek is dodging and blocking attacks from two or three melee opponents the other enemies will just put a couple arrows in him and call it a day. 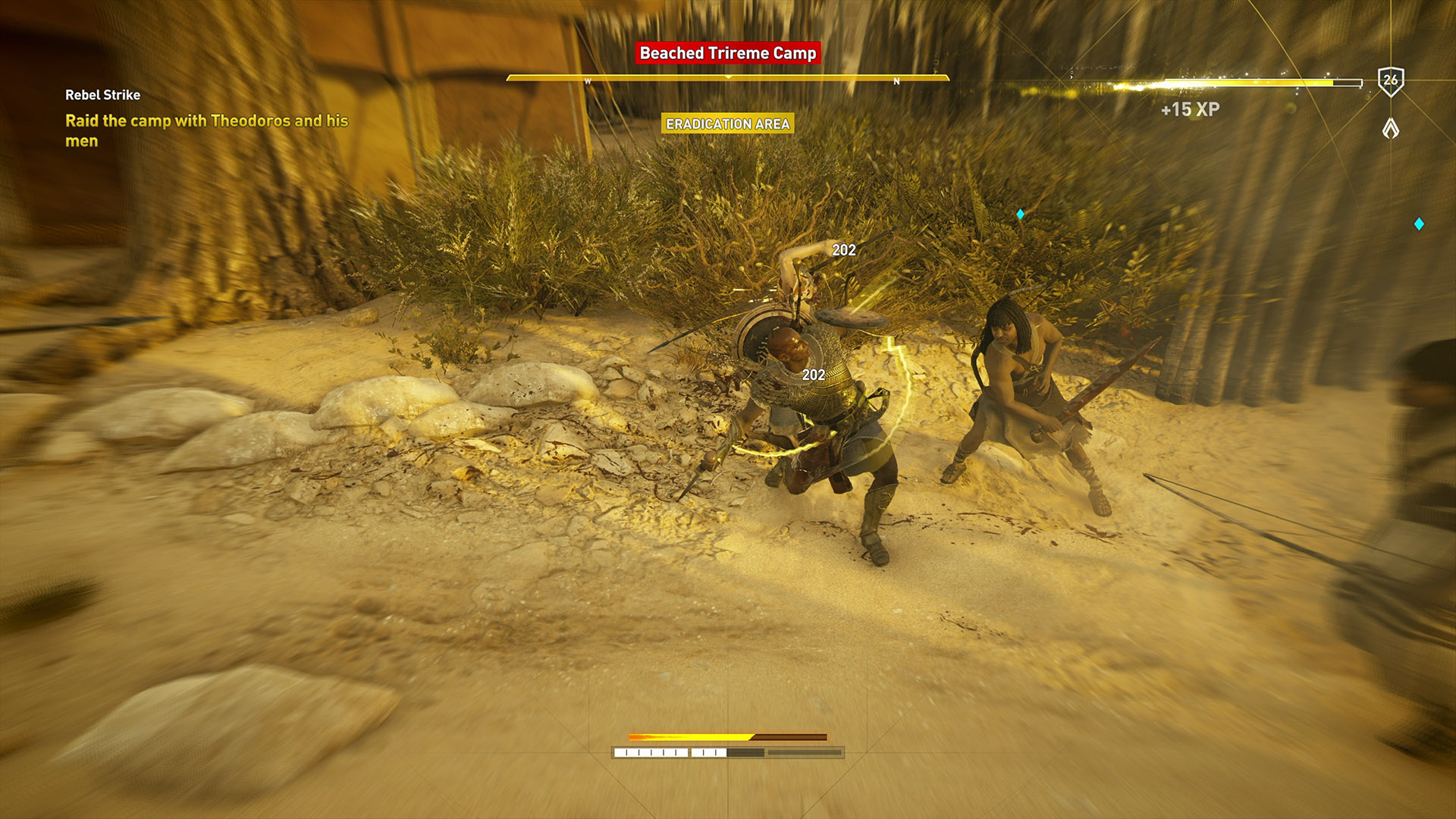 To piggyback off of that, pay attention to the prompts in the tutorial battle. The combat system has been revamped for Assassin’s Creed Origins and it is designed to lend itself well to big open brawls. The different weapons all behave a bit differently in a battle, using a sword feels different than a mace and both feel quite different than bringing a big two handed spear into the fray. Experiment with different weapons and figure out which fighting style suits your playstyle the best. Also, when you figure out which weapon types you prefer, spend some materials and upgrade them. 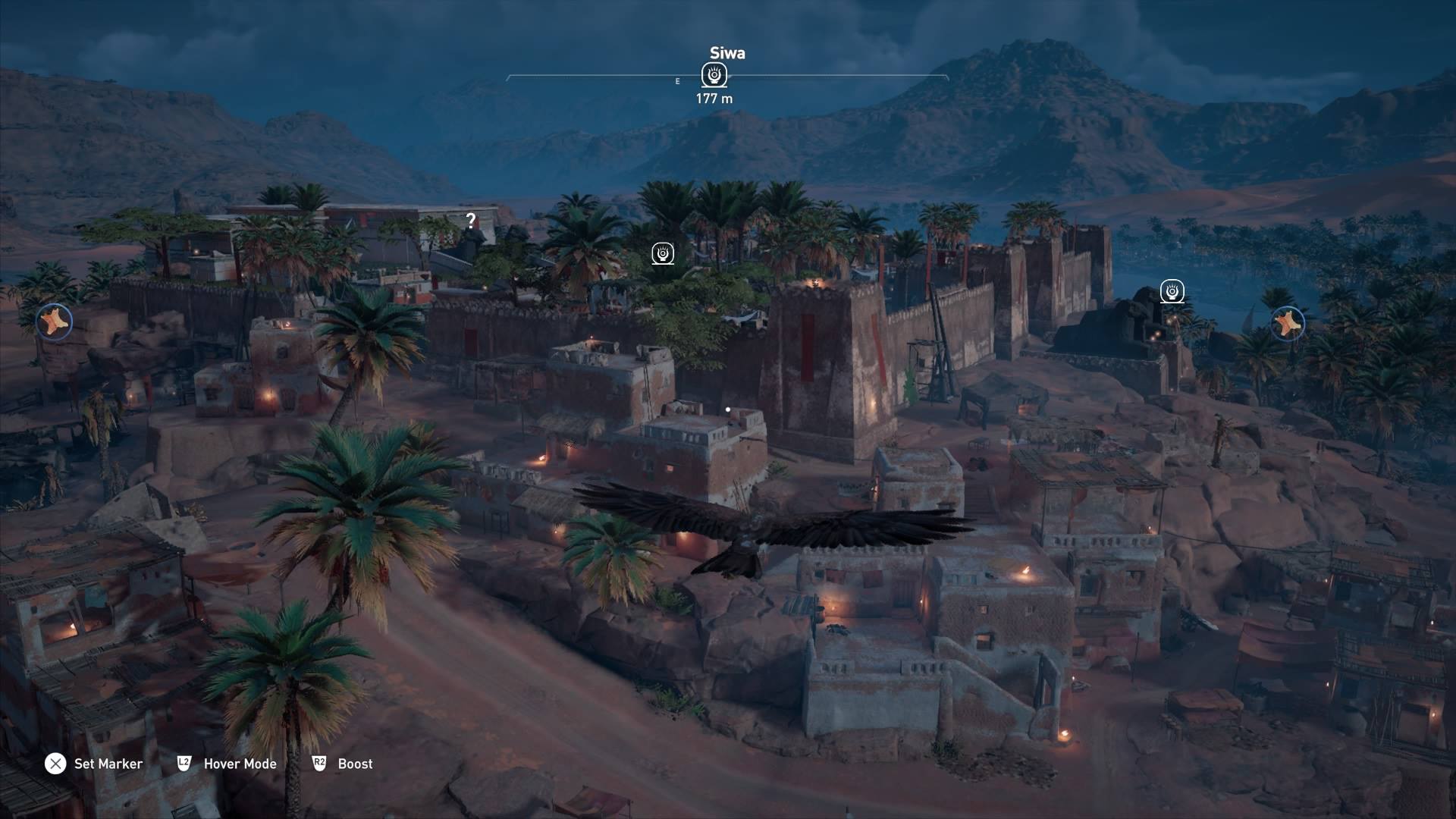 Do a lot of side quests

This is advisable for a few different reasons. The primary and most obvious benefits to this is it is a quicker and more enjoyable way to gain experience than wandering the desert and picking fights with everything that moves to level grind at a snail’s pace, and gaining levels is very important to progress through the harder missions in the game. This is also a good way to acquire extra cash and crafting resources. The less obvious reason is this helps the player get to know the culture of the world. The citizens of Egypt have their own schedules and lives they attend to, and getting involved with their business will help expose the player to extensive world that was created for this game and achieve a greater sense of immersion. 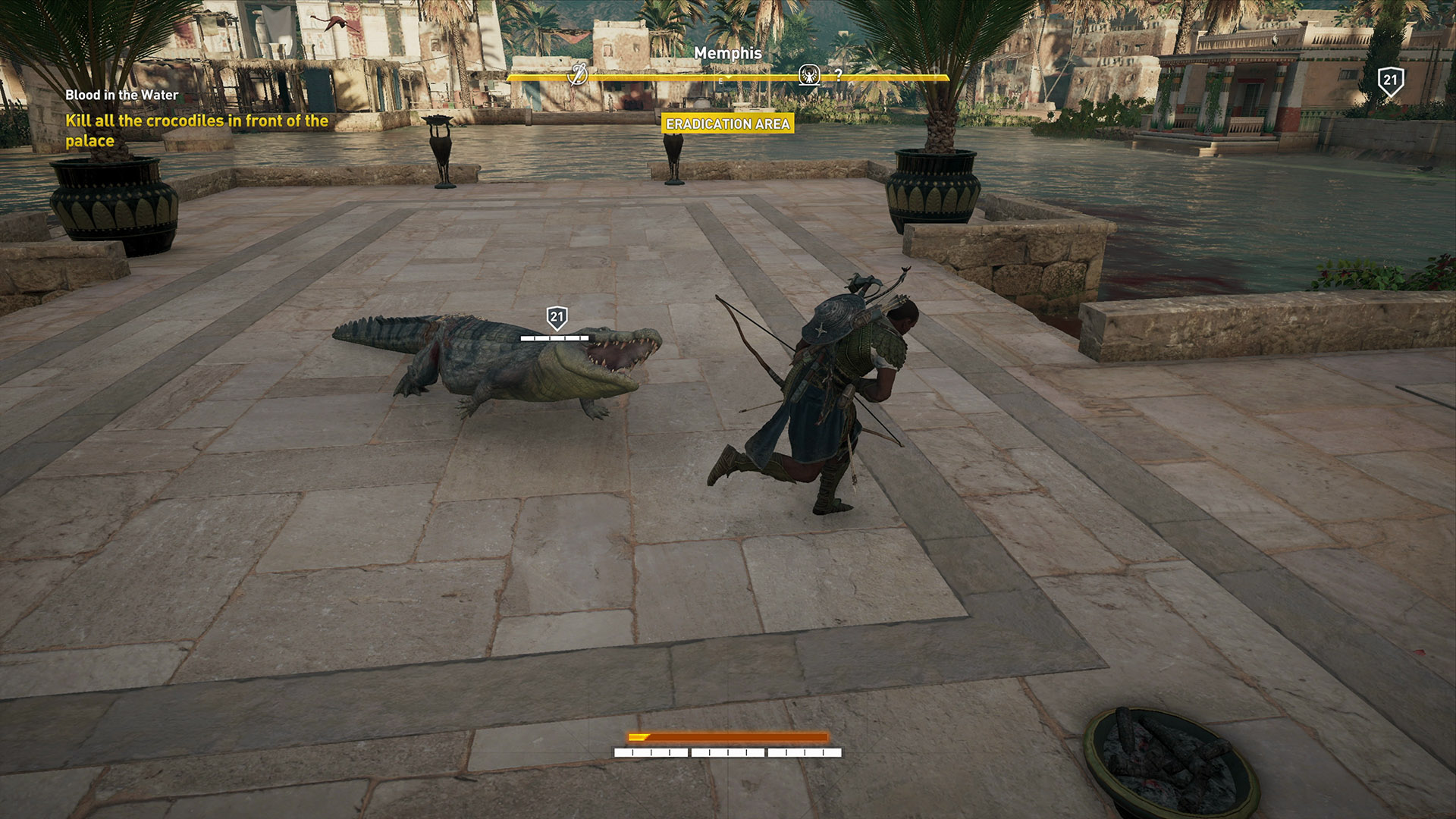 I understand there might be some animal lovers that might not find hunting appealing, even in a completely simulated setting. I get that to some degree, I would kill countless innocent people without remorse in Grand Theft Auto V but wasn’t too thrilled about the hunting side missions. Hunting animals is a great way to acquire crafting materials, and also a good way to practice combat skills. Picking off retreating ibex or shooting down soaring birds is a good way to develop skill with the bow, though hacking a vulture to death with a sword seems to be a less valuable skill to acquire. Don’t laugh, the bastard attacked me and I feared for my life. 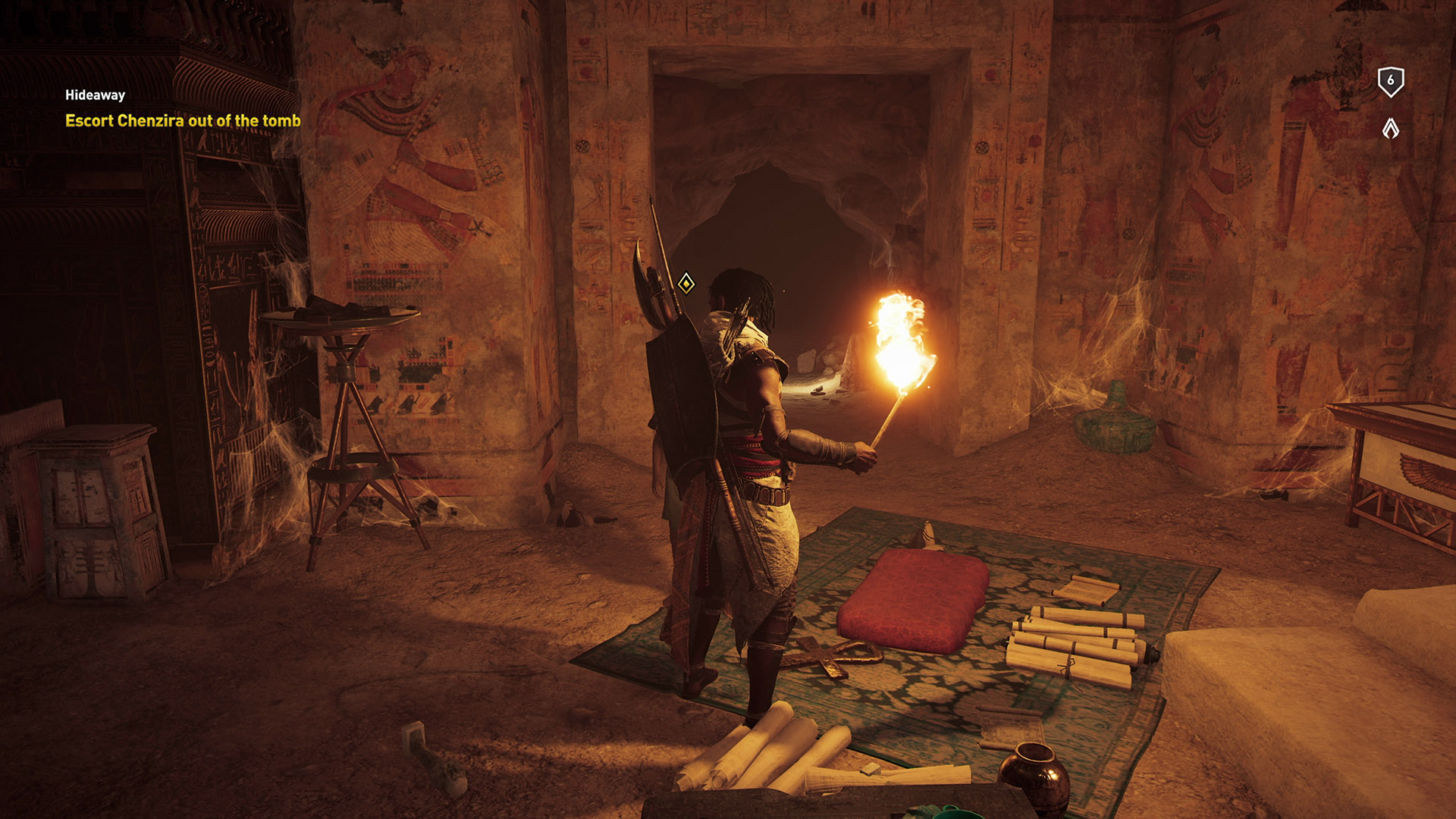 Ignore common sense and parental advice, anything you can burn you should burn to your advantage and amusement. There are the obvious fire traps that can be sprung on enemies from a distance (and yourself if not careful) but there are a couple other creative ways to have fun with flames. Using a torch or firepit is a quick way to turn a regular burning arrow into a much more fun flaming arrow. Also, oil and water don’t mix and oil tends to float. Getting a nice oil spill going on some water can be a prime opportunity to see a burning river. 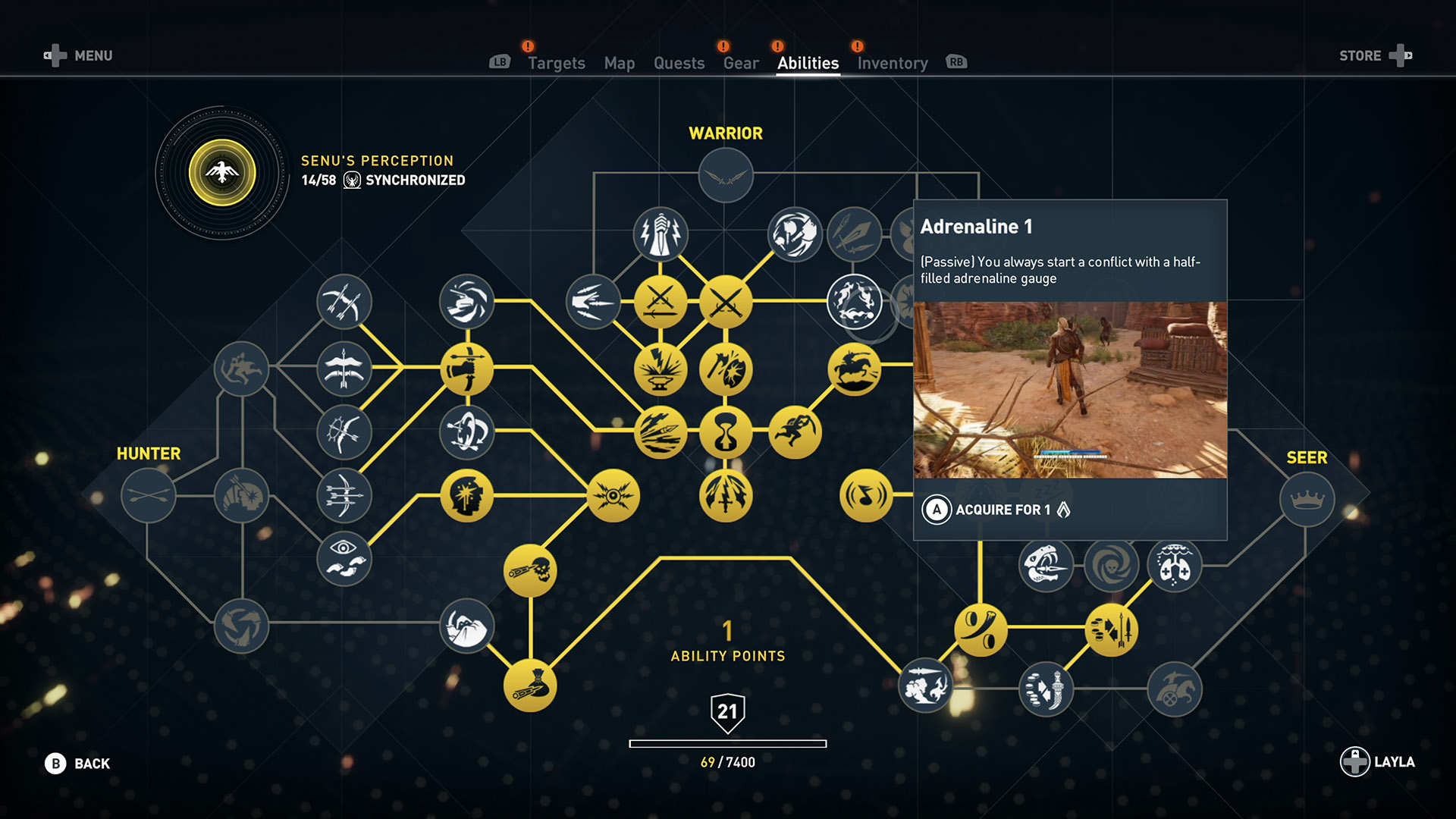 This one is obvious but easy to forget, especially if someone is the type that would rather spend a bunch of skill points at once instead of doing it every level. When Bayek gains a level he gets stronger, both in attack and a defense but the skills are wear some useful abilities are hidden. Some are mundane though no less valuable, like being able to equip multiple bows or melee weapons for quick switching on the fly. Some others are more specialized, like being able to control the arrows fired from predator bows or being able to tame animals to really make them Bayek’s friend. It’s not a bad idea to examine the whole skill tree and plot out which abilities sound the most interesting and beneficial and figure out a plan to unlock them. 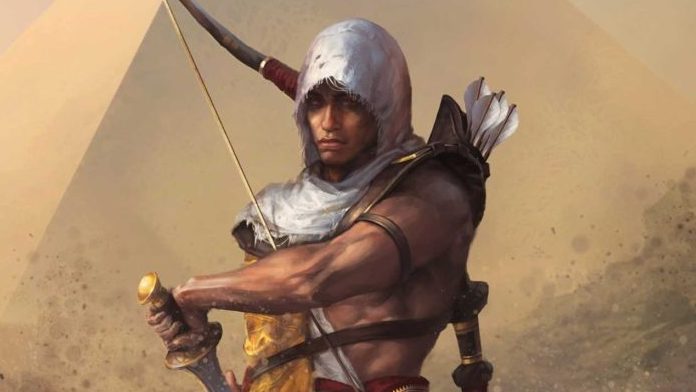 This is the least important item on this list since reading the book is not at all required to fully appreciate Assassin’s Creed Origins. It’s more of a recommendation for hardcore Assassin’s Creed fans or people who really like the characters of Bayek of Aya. The book is a prequel to the game and deals with the relationship between those two characters and how Bayek came to be Medjay, along with some history on the role the Medjay. It’s an easy and quick read and a good way to kill a few hours for people who are interested in those characters. Not being familiar with the book will not diminish the experience with the game in any way, but can be interesting for those especially interested in the characters. 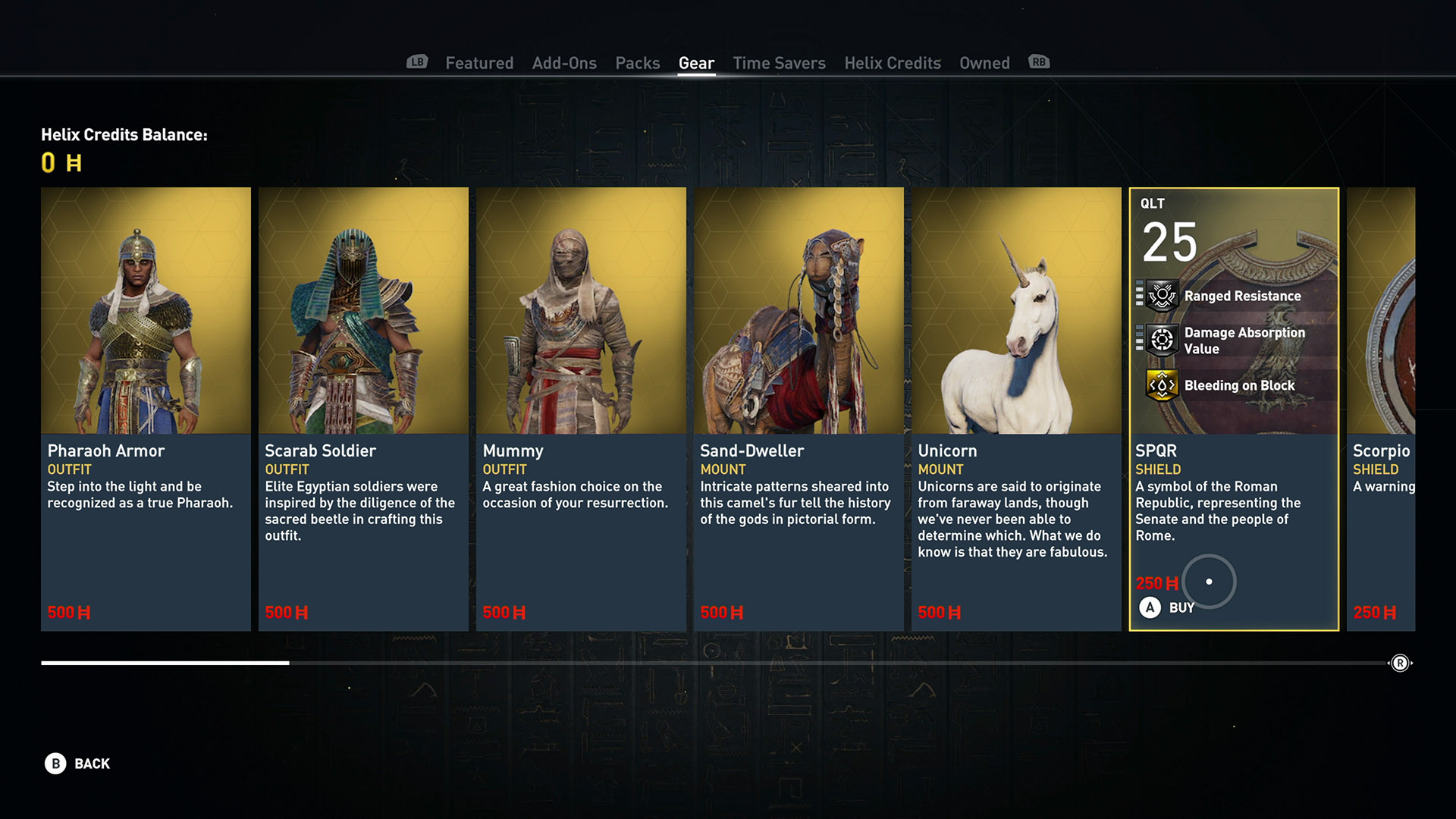 These are in just about every game these days. Some people hate them with the intensity of the fire of a thousand suns, some people file for bankruptcy because of them. They exist, they aren’t going away, but are they necessary to get the most enjoyment possible out of Assassin’s Creed Origins? Absolutely not. Personally I noticed no enjoyment enhancing elements of microtransactions and if you want to throw more money at Assassin’s Creed Origins it is this writer’s opinion to wait until the DLC comes out, since that would likely at least be digital content that has value.