If you’re like us and the millions of other Pokémon fans across the world who have been playing the game over the last couple of weeks, you’re probably well aware of Pokémon Scarlet / Violet’s technical shortcomings. It’s not just a handful of issues, but a whole slew that has dragged the series’ reputation down worse than ever before. We saw some of the concerns pop up with Pokémon Legends: Arceus earlier this year, but we forgave it for its creative approach towards the series. Well, while this latest entry goes to new heights, this is where we have to start drawing the line in the sand. All of this is immensely disheartening considering how solid of a Pokémon game Scarlet and Violet are, pushing the franchise in a strong direction with an open world and the ability to chart your own path. But with two games in the same year that struggled, it’s becoming apparent Game Freak and/or Nintendo are focusing on quantity over quality.

I suppose we should start where it hits the hardest: the framerate. I don’t think I’ve ever seen a game from a major publisher such as Nintendo, let alone a console manufacturer, that has such horrendous framerate. Battles in generally are fine, but out in the open world where you’ll be spending the vast majority of your time, and in the main Academy hub area, the framerate runs at a staggeringly inconsistent rate. Even jumping on Koraidon and Miraidon, it’ll look like you’re playing on a slideshow. It’s as if Game Freak looked at the original Pokémon Blue on the Game Boy and thought “we may have only used a couple frames per animation, but we can go lower.” OK, maybe that’s hyperbole, but it’s not good by any stretch of that imagination. It drastically drags down the experience when you’re traversing this beautiful land only for it to run so sloppily for the good majority of it. The amount of time wasted purely on the framerate slowing down the experience makes a difference, adding a considerable amount of time to your play time. I just can’t imagine a colossal corporation such as Nintendo looking at this atrocious performance and giving it the go ahead to stamp their name on the front of the box. 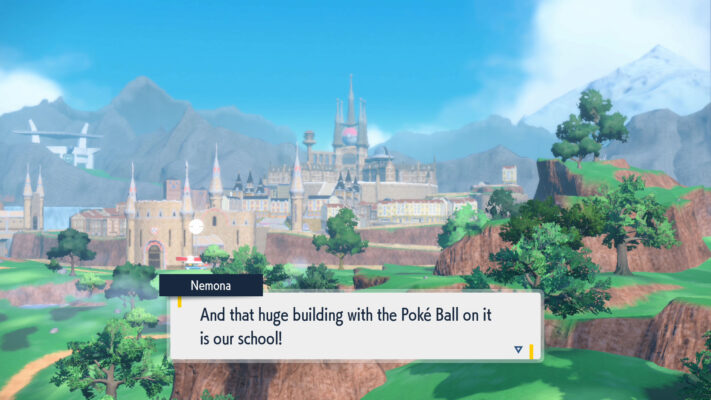 This is part of a cutscene…

With the framerate taking such a hit, there’s also various glitches and graphical hiccups that can be found almost straight from the get-go. If you haven’t noticed, there’s a white vertical line that appears on the left-hand side during cutscenes and transitions reminiscent of improper video rendering from what feels like two decades ago. Even though it’s consistently an issue throughout the course of the campaign, it’s still minor compared to all of the issues. The number of graphical anomalies, from the shadowing flickering or disappearing completely from areas, to characters and Pokémon not animating properly or just interacting with the world incorrectly, are abundant. Multiplayer has been one of the best parts of any Pokémon game, and the way it’s handled in Scarlet and Violet has the potential to be amazing, but the number of glitches that have surfaced shows that Game Freak was just not ready for it in this title.

All of this and I haven’t even talked about the draw distance. While (basically) every game uses a level of detail (LOD) scaler to better control what’s being displayed on screen, Nintendo’s distance is set so short that it ruins not only experiencing new locations but cutscenes as well. Basically, anything past around eight feet from the character is rendered below the quality you’d expect from most games. Not only that, but the framerate in which models such as characters are rendered drops unimaginably low. It’s jarring seeing your avatar and everything around them running at one framerate, while characters just a few feet away are running significantly lower. This technique is generally used for animations that occur far in the distance so to save processing power, but it’s done so it’s almost hidden, or at least not super noticeable. Pokémon Scarlet and Violet throw it right in your face as if it’s a regular way video games are rendered. 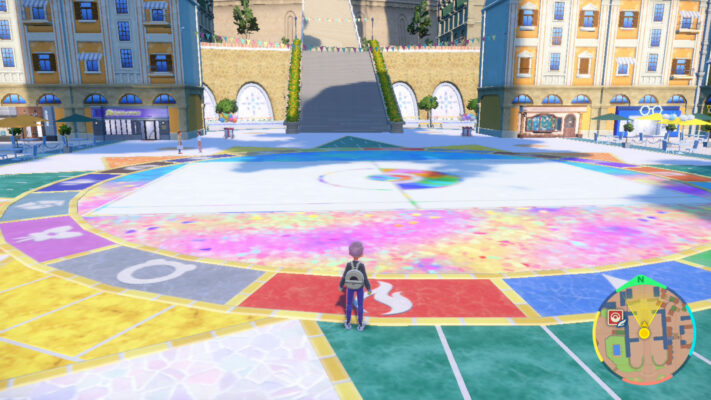 Where has the anisotropic filtering gone, let alone textures?

On top of this there doesn’t even seem to be any anisotropic filtering, making everything viewed at any other angle than straight at it just a blurry mess. I suppose it complements the level of detail on some of the environment to begin with, with locations such an outdoor arena looking like it was pulled out of an N64 game. That’s actually doing N64 a disservice as there are games on the twenty-six-year-old system that look better than this. It may seem like I’m being harsh and maybe I am, because this isn’t how the biggest media franchise should be handled –- it feels like a slap in the face to long-running fans. Transitioning to an open world setting is always going to have room for improvement and learning, but that still don’t excuse the number of technical issues we’ve seen. It’s clear that the priorities were set in the completely wrong areas.

While Pokémon are these cute adorable creatures that will sometimes make you overlook certain aspects due to nostalgia and love for the franchise, Nintendo is a multi-billion-dollar company, and it’s hard to call Game Freak an indie developer; this is wholly unacceptable for a mainline game such as this to be treated with such a lack of care. Scarlet and Violet are far from money grabs as they have an incredible amount of content and innovative components that help drive the series forward into a more compelling series. But, it’s not even that the Nintendo Switch can’t handle the graphics as we’ve seen far more visually-demanding titles, such as Bayonetta 3, Monster Hunter Rise and Xenoblade Chronicles 3, just to name a few. You can only make the excuse of the focus wasn’t on the technical side but rather the artistic side of things for so long before it becomes apparent the graphical engineers are failing where it matters most. There are also confusing design decisions outside of all these technical and graphical concerns, such as why after over twenty-five years we still don’t have voice acting in our Pokémon game? 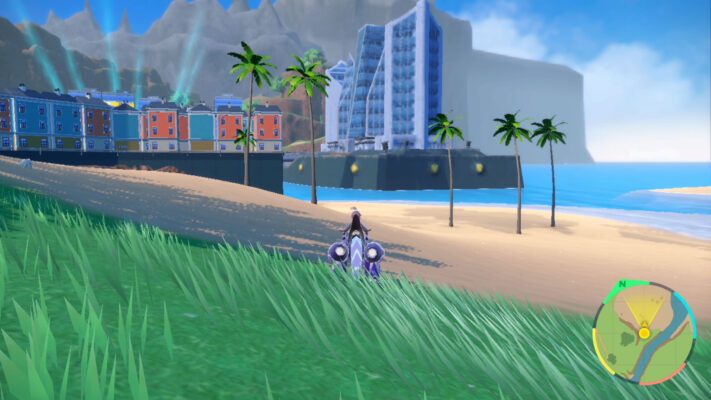 The beautiful city of Levincia

It’s saddening that Pokémon Scarlet / Violet is in such a state because the gameplay is incredibly enjoyable; still, this puts a huge damper on the overall experience. It makes you question what kind of dated tech is Game Freak using to develop their games. Considering Pokémon Legends: Arceus was met with somewhat similar reception to its visual fidelity, they desperately need to overhaul either their engine or process in how they develop their games. Pokémon is the single largest media franchise in the world, and by a staggering margin, and yet Nintendo or The Pokémon Company seem to treat it as if it’s a small indie title. The only upside is that all of the glitches have at least created a comical community online, but at the end of the day it makes Pokémon Scarlet and Violet the butt of the joke. Considering this is the biggest launch in the company’s history, moving over ten million copies worldwide in the first three days alone, it’s hard to see this being a wakeup call for Nintendo as they’re cashing in considerably, but if they want to see the series grow or maintain its heading, they need to reevaluate their priorities. Pokémon Scarlet and Violet desperately needed another year in development, and at that point it could very well have been one of the greatest Pokémon games ever released — instead it’s marred with astronomical disappointment.