I can still remember the first time I saw Threads of Fate at a demo kiosk in a video game store in my local mall. I played the demo twice, once with each of the playable characters, Mint and Rue, and found it was a fun experience that I would never see again. It was some time later when my little brother’s father came in one day with a bunch of games he bought out of the back of someone’s trunk and one of those games happened to be Threads of Fate. I was finally able to actually beat the game I played a demo of, a game that would forever hold a special place in my heart.

This action RPG developed by Squaresoft (now known as Square Enix) originally released in October 1999 in Japan and July 19 2000 in North America. When starting the game you made the permanent choice to play as one of two characters: the aforementioned Mint or Rue. Both characters were in search of a fabled relic known as the Dewprism that would grant the user any wish and Mint and Rue each had their wishes for pursuing this relic. The structure of the game is usually go to a dungeon, fight enemies, do some platforming, defeat a boss to obtain an item and go back to the hub town to move the story along. 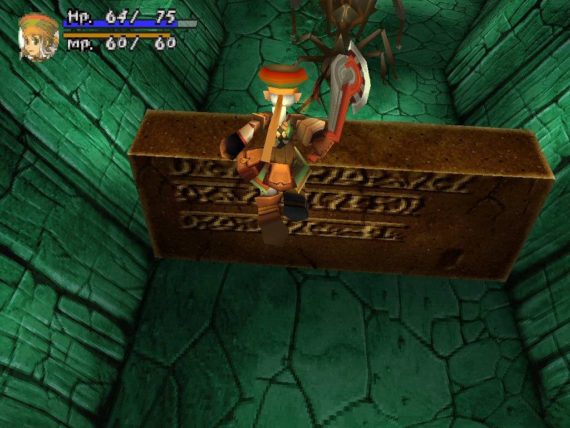 What I didn’t know was how much I would come to appreciate Threads of Fate. Threads of Fate overall is just a little above average, but what makes it stick out is its charm, world and sense of humor. In the first level when playing as Rue you have to disguise yourself as a pollywog monster to save a girl that’s been taken hostage. After turning back into a human and defeating the bandits who took the girl hostage, Elena insists Rue is a pollywog despite his efforts to correct her. There are plenty more moments like this in the adventure and aside from humor, the game also does a good job of conveying tension and sorrow. If one beats it with each character, a special ending occurs implying a sequel. If it wasn’t for this scene I would have been content with the game itself, but with that ending I couldn’t help but think of the potential a sequel could have.

It has been a little over sixteen years since Threads of Fate released and the game industry has changed a lot since then. There have been complaints the past two generations about the lack of Japanese RPGs for home consoles. They have been present on handhelds, but a lot of the gaming fanbase is also playing at home on a TV. A Threads of Fate sequel could satiate that appetite for those fans and a release on the Switch could fill both markets. 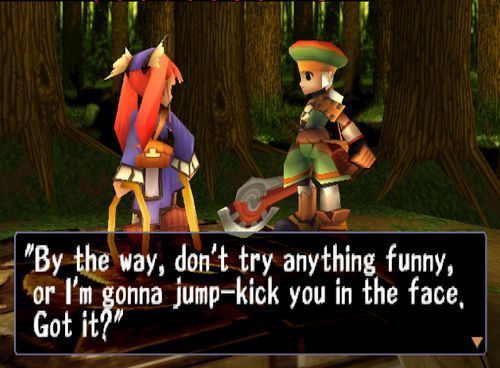 Threads of Fate did some things well, but could be improved on greatly in other parts. The combat is the most glaring issue. It’s simple and easy to understand: press X to strike for a melee attack, triangle for your special attack (Rue it’s an ax swipe and for Mint it’s a spell), square to select a transformation for Rue or a magic spell for Mint, and circle to jump. There is no issue with this setup, but collision with enemies could feel more satisfying by better use of sound effects and having proper combos to string. The combat and the platforming segments themselves feel like a prerequisite to the original Kingdom Hearts. That game and franchise had a much better grasp at combat. Attacks are more fluid, you have encompassing passive abilities to make your attacks string together, there are clear combos and spells can be accessed through a shortcut by holding L1. Threads of Fate and Kingdom Hearts are two different games, so I wouldn’t want the sequel to mirror KH’s combat, but there are notes to be taken from it.

In Threads of Fate, magic and transformations are accessed from a menu that pauses the action. While I don’t mind it, many of the gaming audience prefers a seamless option. Given that there were many transformations and spells to be found throughout Threads of Fate, some sort of menu would be required. You can have a menu accessed by the pause menu where you can set up to eight spells or transformations (one for each shoulder button) to be accessed via the shortcuts. To access the others you could go back into the menu and do it manually. Mint’s secondary effect spells could be activated by pressing the magic and jump button simultaneously, reducing the need to go back into the menu. That leaves the square button without a function, but it could be used for something like a dodge roll to enhance mobility. 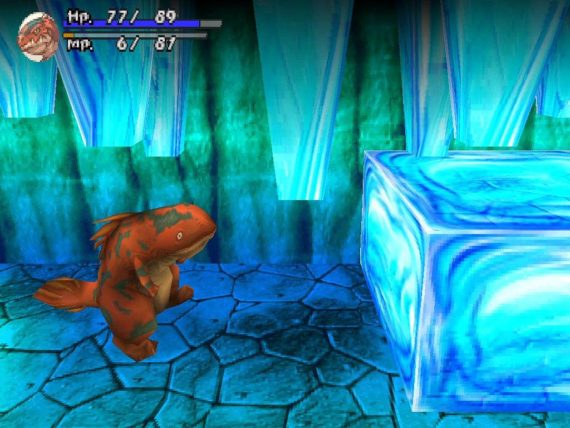 One of Rue’s transformations.

Threads of Fate is an RPG and its stat increasing mechanics could be emphasized more efficiently. Maximum HP is increased by taking hits while MP increases by consuming it. These could also be raised by buying the specific stat boost items in the shop for a lot of money. Strength and Defense could only be increased via items, the most viable options being equipping the bracers. These options work fine throughout, but it can be time consuming to increase MP and counterproductive to increase HP and the others were not interesting. This could be corrected for HP and MP by simply making the HP and MP Ups more affordable and Strength and Defense by replacing the bracers and belts with weapons and armor.

It would also be a missed opportunity to not have Magic and Magic Defense stats. Obviously, these would increase the damage dealt by Mint’s spells and the damage dealt to her by magic. Rue is more physical oriented, but his Magic stat would increase the damage he deals with attacks that consume MP while he’s transformed. These stats could also be manipulated by equipping weapons, armor or consuming a stat-increasing item. Gaining currency by selling monster drops or special items is fine and the coin system for continues is intriguing. The church donations, on the other hand, require too much money just to gain coins. They wouldn’t be missed. 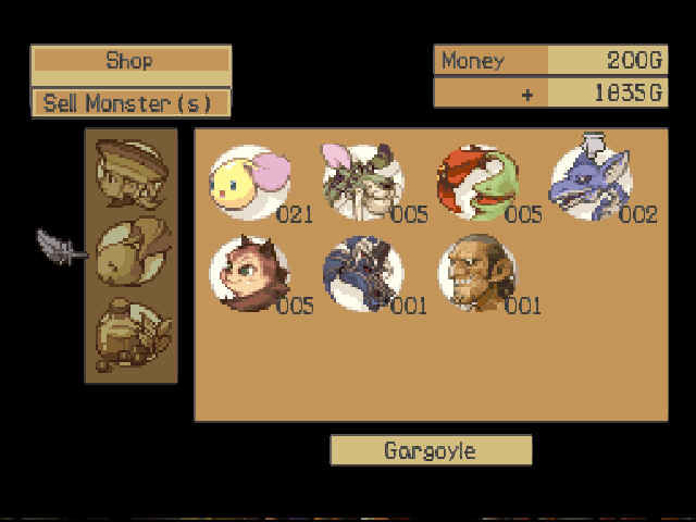 Threads of Fate was also a replayable game. Separate playthroughs for Rue and Mint make each playing experience unique and both even have an exclusive dungeon. Rue gets the horror themed Ghost Temple while Mint gets the Gamul Forest, both giving a unique experience for each character beyond their playstyles and in a sequel they go further and make multiple dungeons or areas unique for each character.

There will be spoilers for the Threads of Fate’s ending, so if you intend on playing it and care about spoilers, this is a warning. As far as story goes, we know the duo have gotten a tip off to a new relic in the desert ruins of Ephlesia City. A city near these ruins could serve as hub like Corona did for the Dewprism in Threads of Fate. At the end of Threads of Fate, new dolls were discovered, Rue’s friend or lover Claire came back to life, and Bell and Duke went from villains to anti-heroes.  Of course it would be nice if all of these characters returned in the sequel. Bell and Duke could still be on the hunt for treasure causing trouble for Mint and Rue through the course of the adventure, but will assist the two if they were in trouble. Elena and her father would play the same role as they did in the original, Elena being dense and Klaus providing information and hints to the whereabouts of Valen’s relic. As for Mint and Rue, both of them had complete arcs, but Rue did discover there are other dolls out there so his character could grow from interacting with these other dolls. 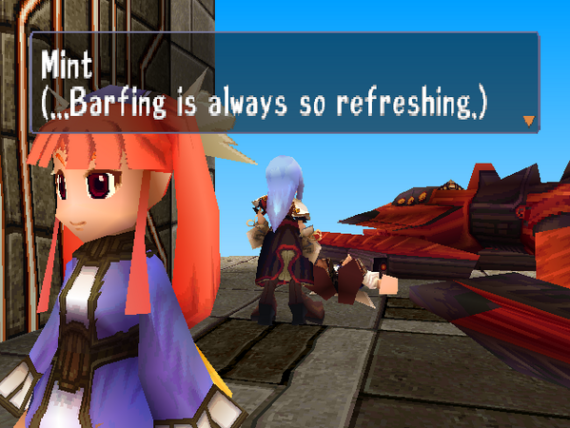 One similar to him called Ruenis was discovered at the end of the game. Since we saw so little of him, it’s hard to determine how he could play into the story of a sequel, we just know that he will stay behind with Claire and speaking of Claire, there’s an opportunity there to go in depth with her relationship with Rue. The true ending indicates that she’ll stay behind, but there could be any number of reasons to bring her in. Mint as we can see is still determined to rule the world, but it comes off as in jest. She initially wanted to to get back at her sister, but now it’s likely an excuse to go on an exciting adventure and an exciting one it could be.

As good as all this sounds, developing the game remains an issue. The director of Threads of Fate, Koji Sugimoto, has been working mainly on smartphone games as of late, but last year expressed interest in a sequel. Hiromichi Tanaka, Threads of Fate’s producer, unfortunately left Square Enix in 2012 due to health reasons and became a freelance adviser afterwards. Makoto Shimamoto was the lead designer for the project, who in recent years has worked with Monolift Soft on the two Xenoblade Chronicles, so the team is spread out. It’s unlikely for Shimamoto to return and it would be hard to emulate the story’s feel without him as he had a hand in the original story concept. Still, in the gaming space of 2016 where colorful Japanese tongue-in-cheek games are infrequent on home consoles, a Threads of Fate 2 could offer some much needed variety for the industry.