There’s a reason why The Evil Within was our first appointment at PAX. With all of the impressive games on display at this year’s conference, none have us bottled up with as much raging anticipation as The Evil Within — and it’s been that way for quite some time. While other games start off strong and degrade as showings go by, The Evil Within has constantly shown improvement and fresh new sides. Not only is this uncommon for a post-2010 game, but it’s also quite uncanny for a survival horror game, normally a genre reserved for similar concepts and scares. But not until the PAX East 2014 demo, perhaps the fourth we’ve witnessed in the past year, did the game prove once and for all that it’s the true Resident Evil. 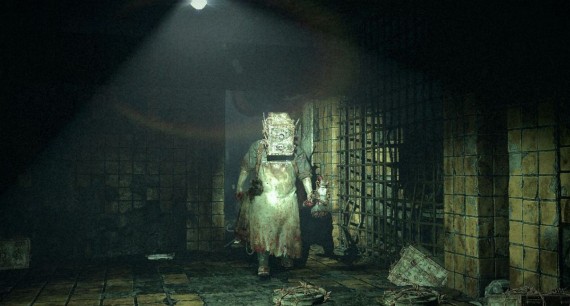 What’s great about The Evil Within is how it has the ability to summon comparisons to the best parts of Resident Evil 4 and Silent Hill while at the same time feeling like its own property. Case in point: a massive outdoor environment that seems to constantly shift. For the first ten or so minutes of the demo, protagonist Detective Sebastian Castellanos walked through a large city that seemed to just have been ravaged by a massive earthquake. We see different parts of the city shift up and down as a route is attempted to be found. It’s a beautiful site and rather creepy thanks to a misty, gray palette atmosphere and the general lack of occupants, recalling the best parts of Silent Hill 2. Of course, the town doesn’t stay empty long and Sebastian is soon thrust into a battle with zombies. There are multiple ways to dispose of baddies including guns, blunt objects and our personal favorite: setting them on fire and watching them burn alive.

After clearing the surface level, Sebastian departs into an underground sewer-esque lair where the true evil emerges. All of the enemies in this area were large brutish creatures that had a crate wrapped around their head and backs with barb wire. Taking them down usually requires a even bigger object to smash them. One of the best occurrences of this was when a trap was set off that crushed one by lowering a ceiling covered with spikes until he was no more than a puddle of monsters. Indeed, this is a brutal game; perhaps even more gory than the goriest thing Shinji Mikami has done.

Unfortunately, that marked the end of this tragically short demo, but it only took twenty minutes to prove the most valuable point of all: The Evil Within is the true successor to Resident Evil 4. More still, if everything we’ve seen so far carries through to the final product, this could easily shape up to be the next big name in survival horror. We just can;’t wait for what the next demo has in store for us.