Taking up a decent amount of space, there is only one way to describe tinyBuild’s booth. Orange and covered in games. This up and coming indie publisher has made it a point to showcase a large amount of their games on offer instead of just highlighting one or two recent or upcoming releases. Speaking to the company’s co-founder, Alex Nichiporchik, it becomes obvious that he loves his job and the games that he has signed. When I joked to him that I initially took the appointment because I wanted to swear at him about the extreme difficulty of the recent No Time To Explain Remastered, he only responded “Good!” There is a twinkle in his eyes when he talks about his games. He is in this out of passion.

During my time there, I got to try out two games. The first was the recently released Party Hard by Pinokl Games. In this game, the player takes control of a hapless fellow who just wants to sleep but simply can’t because his neighbors just won’t stop making noise. He quickly comes to the conclusion that there is only one way to resolve this issue: murder. Taking place in a top down format, the player is tasked with killing everyone at the party without getting caught. During my time, I caused a runaway golf cart to crush a group of revelers, made a speaker explode, immolating some dancers, and started a gasoline fueled fire in the bedroom of the home. The easiest way to describe it is a version of the Hitman franchise where everyone is the target mixed with a similar aesthetic feel to Hotline Miami. Smart play, exploration, and timing are the only way to earn a good night’s sleep.

As a side note, I did ask Alex how he would respond to complaints that the player is tasked with slaughtering countless inconsiderate, but otherwise innocent, people. He doesn’t feel that the subject matter should get in the way of fun. “It has a dancing bear in sunglasses. How can anyone take it seriously?” The goal was to imbue it with a dark, but cartoon like sense of humor. There are currently eleven stages in this one, with some random elements in each one to up the replay value. 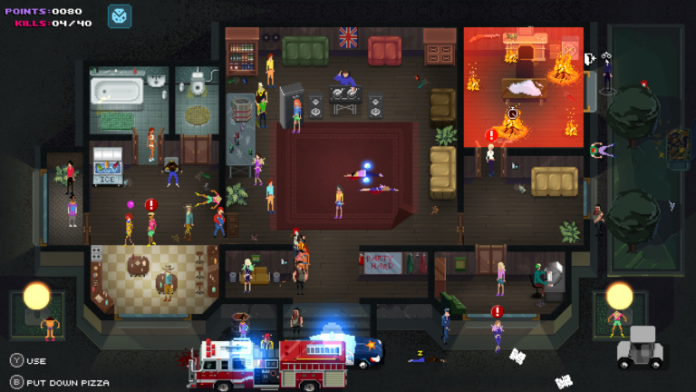 The other game I was able to try out was Punch Club, developed by Lazy Bear Games. Personally, while Party Hard has it’s merits and is worth playing, I liked Punch Club a lot more. This also uses low-fi, pixel basded graphics to paint its world, but the sprites themselves are more detailed. Billing itself as a “Rocky Simulator,” the player takes control of a nameless hero to help guide him to the top of the boxing circuit. In a Sims-like fashion, the player will need to balance working out, earning money, and keeping his sleep and rest meters up. That’s where the similarities end though. It is really more about directing the flow of our nameless hero’s story. Decisions made early in the game will affect circumstances later in. A player might find him or herself abducted by aliens, end up in Russia, or many other circumstances.

As is normal for a tinyBuild offering, this game piles on the humor and references galore. While shopping at the grocery store, Jay and Silent Bob stand-ins can be seen outside the window. On the way home, my budding champ was mugged. While I won the fight, the food was lost and I was out of money for more. Famished, the protagonist eats a rotting burger out of the trash, passes out, falls into a sewer, and awakens to find himself face to face with a teenage mutant ninja crocodile. The tongue is buried so far in the cheek that it is starting to poke out of the other side. This one is absolutely on my list. 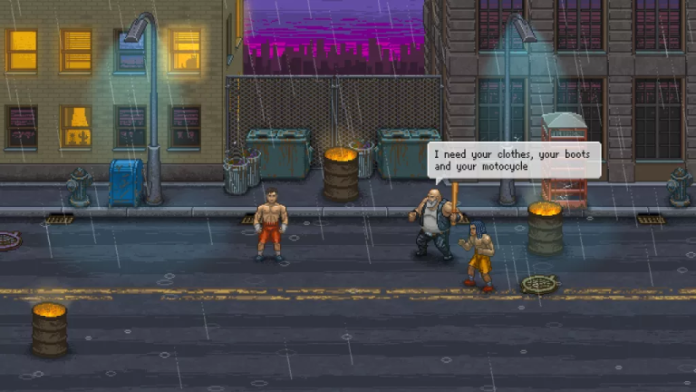 With their ever growing stable of quality games, and their stance on DLC (it should always be free unless the money is for charity), tinyBuild is becoming a prolific publisher to watch. Having been founded by someone who obviously cares about what is getting made, I expect to see more good things come out of this UK company.