You can’t fault Epiphany Games for lack of ambition. Typically, when a gaming company is just getting started, their initial goal is to put together any game that works and doesn’t cause seizures. However, Epiphany Games knew that putting out only one game is for suckers and already has plans for an entire saga set in a completely original world. As luck would have it, I recently had the opportunity to dive into their first game, the indie RTS/RPG/PvP/OMG Frozen Hearth. Set in the fantasy world of Amorra, you must defend the Danaan people from ferocious ice monsters, other warring tribes, and the nagging sense that the game isn’t quite finished. 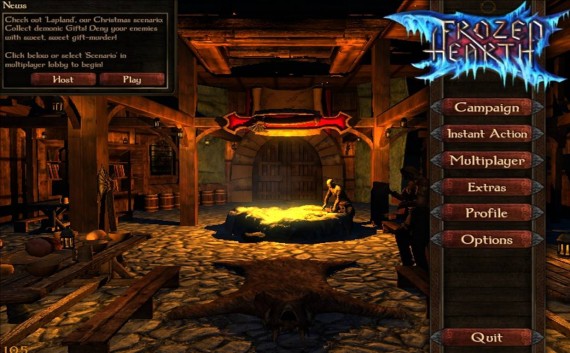 One of the first things you’ll notice is that Frozen Hearth is a lot more consolidated than other RTS titles. There are not any individual resources you need to farm and everything you need to gather comes from the ever important resource nodes. These nodes just happen to have supplies of food, wood and enemy life force all at the same place, meaning that they are basically the Amorra equivalent of a Walmart. Once you capture one of these nodes you really don’t have to do anything else as it continuously provides you with a stream of all possible resources unless your jerk opponent goes and captures it from you. There aren’t any builder or harvester classes that you need to worry about, and the focus in the game seems to be almost exclusively on combat. The path for victory on just about every map is a straight line between the resource nodes and building up your army, and all units that weren’t focused almost exclusively on killing things seem to have been deemed “unnecessary” and “not blood thirst enough” and were removed from the title.

Frozen Hearth as a whole feels a bit scaled back and the resource nodes aren’t the only example of this. Unlike many of its RTS brethren, you lack the ability to build and place secondary structures, and the only important facility you have is your base. The base itself does have some amount of customization to it, as you can build six different substructures on top of it that usually provide some sort of passive boosts. However, this amount of customization feels almost superficial in comparison to what a lot of the heavyweights in the genre offer, and far less planning or thought is required when preparing a course of attack in Frozen Hearth. A lot of games devolve into races to the resource nodes and then endless click fests, and it seems like some element of strategy is missing. The game certainly feels more streamlined than other RTS titles, but whether or not you think this is a good thing probably depends on how big of a fan of the genre you are. This might serve as a nice introductory titles for those looking to get their feet wet in the genre, but I have a feeling that hardcore RTS junkies are going to miss some of the extra stuff.

The game does offer a couple of different gameplay modes, including a story driven campaign for people looking for a quest and an instant action mode for those of us that don’t have time for the jibber jabber. The story has 22 different missions, but almost half of them feel like semi-tutorial type stages. A lot of the missions themselves are fairly dull, and some of the early levels seem to be awkwardly floundering around, feeling unsure of how to properly introduce you to the title. One stage has you doing tasks for a couple of characters before they’ll tell you the information you came for, which technically manages to incorporate an RPG element into the game even if it is one that almost everyone hates. I’ve never heard anyone say, “Yeah, that RTS is great but I just wished it had more fetch quests” but Frozen Hearth does cater to that crowd of imaginary people. Later missions are more compelling and challenging, but by that time its almost too late. The actual plot of the story campaign is fairly interesting, involving a race of ice monsters known as the Shangur invading the Danaan, a group of tribe like people who enjoyed farming, oral history, and killing each other in meaningless border disputes. However, I ended up enjoying the lore and background more than I did the actual story, and as a whole the plot is largely forgettable and seems to be there just as a way to string together the stages.

The instant action is substantially more enjoyable, allowing you to jump right into the game against one, two, or seven enemy forces (if you’re feeling particularly tough and suicidal). Playing this mode gives you one stage to play through, and allows you to set which map you play on, how many allies you play with, and how many enemy forces you fight against. You can even play as the Shangur if you want to play as the baddies, and their play style and abilities are unique enough that there are some noticeable and substantial differences between them and the Danaan. It is a substantially better way to get into the action as it allows you to get straight to all the fun stuff without several hours of filler. In between story missions I frequently found myself jumping into one of these matches to sort of clean my pallet and awaken me from my stupor. By cranking up the number of enemies, the action becomes more frantic and controlling as many resource nodes as possible becomes crucial. The reliance on resource nodes and the focus on combat units still makes this more simplistic than a lot of other RTS titles on the market, but in quick spurts this still provides some mindless fun.

One of the more interesting aspects of the game is how deeply multiplayer is ingrained into the title. The entire story mode is cooperative if you so desire it to be, and in instant action you can organize up to eight individuals in any assortment of two teams you want (4 on 4 for the truly competitive, or 7 on 1 if your group of friends happens to keep one person around that you really hate). The multiplayer does make the game substantially more interesting, and the variety of multiplayer options is one of the few areas where Frozen Hearth stands head and shoulders above its competition. Unfortunately, currently the entire multiplayer concept is help back by the lack of any sort of lobby system or multiplayer server. The only option for now appears to be using a LAN or direct connection, which sort of hamstrings the whole experience. Frozen Hearth essentially requires at least one other individual if you are going to enjoy it to the fullest, but the current set up makes that extremely difficult unless you are able to talk one of your friends into purchasing the game as well. If they ever get around to improving their multiplayer service (which seems to be on their to do list), then Frozen Hearth suddenly becomes a much more interesting purchase as the multiplayer options here are pretty solid.

Another interesting feature was the incorporation of some minor RPG type elements into the game. For the story campaign, you select a hero out of a pool of nine, and like some loyal puppy he or she follows you around for the entire thing. Each hero has some base stats and abilities, and by engaging in combat you gain experience points that you can use to power up categories of your choosing. It is an interesting way to add some customization to your character, but beyond the main guy the rest of the units are largely interchangeable. They can also level up throughout the course of a mission, but you don’t really get to carry these guys over to the next stage so keeping track of them is somewhat meaningless. There is at least a bit of an extra incentive to keep your guys alive longer as they get stronger over time, but honestly it isn’t like you were just going to go about sacrificing them for kicks anyway so it doesn’t change gameplay significantly.

Visually, Frozen Hearth is passable but it isn’t overly impressive. To be fair, I had to play the game on the standard graphics settings because cranking it up to high made it look like I was playing the game on a zoetrope. For those of you with lower end PCs, it is possible to turn everything down super low which should allow most laptops, graphical calculators, and toasters to run it, but at this level, the game has an aesthetic only slightly above paper mache.  The maps are well designed and the character models look nice enough, but with the exception of some of the bigger monsters, my first reaction to the visuals was how generic everything looked.

Frozen Hearth does have some interesting ideas, but there are enough missteps here that you might want to take a peak at some trailers first before deciding to drop down the cash. At the very least, this is a fairly strong first showing for Epiphany Games, but you can tell it was their first, tremulous step into the gaming market. Some of the design choices are questionable at best, and the lack of a real dedicated server for multiplayer play is a huge mistake, especially for a game that seems to be marketing itself based on how good its multiplayer is. While the campaign is somewhat short, I don’t absolutely hate the basic mechanics behind the game and if the multiplayer had been simpler to organize and get into, I would have had a much easier time recommending this game to a broader audience. Those interested can find Frozen Hearth at one of several online locations for $20-25.