With the release of Pokémon X & Y a week behind us, legions of Pokémon fans have been happily tearing into their new copy of the monster collecting RPG. That includes us here at Hardcore Gamer and as we have been battling through the gyms and team flare, we thought we would take a moment and take a look at yet another set of starters. In Pokémon X & Y you aren’t given the choice for just one set of starters, but two. Making a much heralded return to pull as much nostalgia out of established fans of the Pokémon series as they can, the Kanto starters Charmander, Squirtle and Bulbasaur are back. They also each get a mega evolution which adds a twist into choosing which one you want to accompany you on your journey.

Far from being just a gimmick, mega evolutions actually make quite an interesting impact on the viability of each of these starters. Knowing what your particular mega evolution offers can make a big difference in how you set up your Pokémon for battles including how you stat train your Pokémon and the moveset that you plan on using with it. Knowing this we will take a look at each of these starters’ mega evolutions and see what they have to offer outside of their normal base stats and abilities. Each mega evolution has something different to offer its respective pokémon, especially with Mega Charizard receiving two version specific mega evolutions. This should give some insight into what potential these starters will have further down the road in game and competitively. 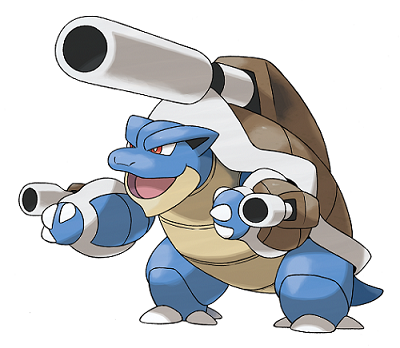 In the Black/White generation Blastoise, with its water typing and usuable bulk, was a fairly useful rapid spinner of the Underused Tier. Now in X/Y it sees a good upgrade to almost all of its base stats in mega form, with only its base HP and speed remaining the same after mega evolving. Much of the upgrade that Blastoise sees is in its defenses, with both defense and special defense rising to 120 and 115 respectively. While this rise in bulk would seem to signal that its meant to be more defensive its Special Attack rises to a very healthy 135. This means that it will be able to hit as hard as a Darkrai or unboosted Volcarona neither of which are slouches. Couple this with its unique ability “Mega Launcher” which boosts the power of “aura” and “pulse” moves and you have the potential a fairly hard hitter. Blastoise’s main drawback is its paltry base 78 speed, but with the significant rise in bulk it will likely be able to take a few hits before going down. Being a water monotype does it some favors with it only having two weaknesses to worry about, but a well built team should be carrying a strong grass type move user or a grass type itself such as Venusaur which will give Mega Blastoise a tough time.

Charizard has the distinct honor of receiving two different mega evolutions that are version specific. Not only do they sport two very different designs, but they also have very different stat spreads and the X version receives a secondary type change. Let’s take a look at the one that has received the most changes: Mega Charizard X. 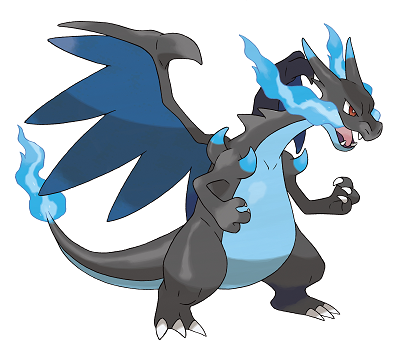 Mega Charizard X just on its face is the more desirable of the two mega evolutions. Its design is quite bold and may be hit or miss with long time Pokémon fans, but the main reason why Mega Charizard X has a major step up on its Y counterpart is the dragon typing. Losing the flying typing and swapping it out with dragon is the answer the question that every kid wondered to themselves when they found out about Charizards typing; “you mean it isn’t dragon?” Well now it can be the dragon type everyone always thought it should be. Looking at the stats it also receives some very good upgrades with its most significant upgrades being in its attack stats which both get bumped up to 130. Speed remains at 100 however and fire typing, even when coupled with the dragon typing is not exactly a typing that survives very well without speed behind it. The dragon typing is the saving grace though stripping away that crippling 4x rock weakness and knocking down to 2x. Mega Charizard X also receives the ability tough claws that powers up moves that make direct contact. Depending on what you have planned for your Mega Charizard X this ability can be very useful. Either way, train its speed and attack stat of your choice and Mega Charizard X might still be able to make a major dent before succumbing to the inevitable dragon, rock, or ground user. 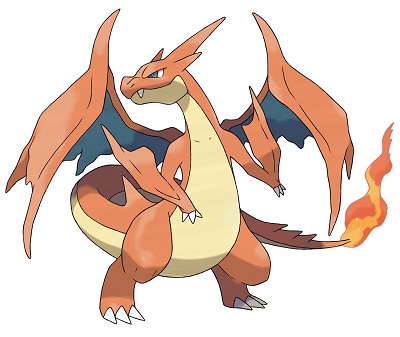 Mega Charizard Y is the more traditional Charizard design, but it also retains its crippling Fire/Flying typing. Its special defense sees a slight bump to 111, but the main stat that Mega Charizard Y users will want to take advantage of is the base 159 special attack. This puts it above Mewtwo in raw damage dealing capabilities.  That combined with its ability “drought,” which powers up fire moves and its fire stab, means Mega Charizard Y can wreak major havoc as long as it gets the chance to fire off a move. With 100 base speed, a lot of things can outspeed it, however, and many of these faster foes are fairly likely to be carrying a rock type move in their repertoire. This puts a major dent in Mega Charizards Y’s viability competitively, as the likelihood of being cut down before putting that major firepower to good use is very high. That’s not to say that Mega Charizard Y won’t be useful in your playthrough of the game, just don’t set your expectations too high when battling online with your high firepower friend. 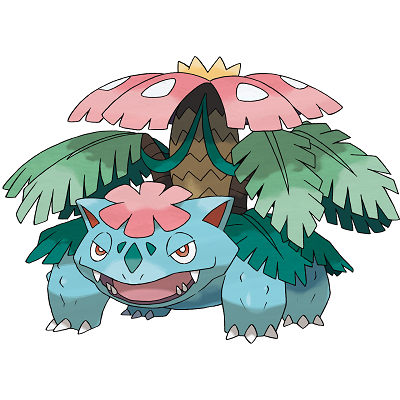 Venusaur was the only starter from the Kanto region that managed to sit comfortably in the overused tier of competitive battling. This was largely due to its chlorophyll ability, which Mega Venusaur loses, and sun support which regardless of source is now restricted to 5 turns (weather activated by abilities used to be infinite unless overridden with another weather).  With its major source of power stripped away, does the stat boost that Mega Venusaur receives make up for it? Well let’s take a look and see. Mega Venusaur also receives a good boost to many of its stats. All stats outside of speed and HP see a good boost with the highest boost being in its defense at base 123. Its special defense isn’t too far behind at 120, and combined with its ability “thick fat” knocking its type weaknesses down to only two and you can see that Mega Venusaur was meant to have good bulk. Both of its attacks get boosts, but special attack gets the biggest one sitting at base 122.  Venusaur isn’t going to be sweeping with base 80 speed, but the tools it’s been given and its grass/poison typing means that it can fill a very useful slot on a team able to absorb water and fairy attacks. When training your Venusaur, focus on HP and one of its special defense, because many of the attacks that your Mega Venusaur will see will be special attack oriented.

And there you have it: a fairly in depth look at the Kantos starters and what their mega evolutions have to offer. Even if you have already chosen your Kanto starter, you can still make the most of what they have to offer. Even if they don’t see much use competitively, they are all more than powerful enough to be very useful in the main game and will serve you well in that capacity.