TOMY has been in the toy biz for decades and always seems to produce products that bring the nostalgia running back. The company created toys for Beyblade, Naruto and of course, Pokémon. They also breathe new life into a brand for younger generations to enjoy because, with the recent cartoons airing on Cartoon Network, Sonic Boom is another line of products TOMY is introducing to new fans of the world’s fastest hedgehog.

Last year we checked out TOMY’s line-up of Sonic Boom toys for the holiday season and now have been given the opportunity to play around with the latest Sonic Boom toys. The first one is Tails’ Plane which is a high quality flying vehicle in terms of toys. You’ll naturally hold the plane from the tail (get it?) meaning the trigger on the underside is in the ideal position. Pressing the button makes the propeller spin for a second or two giving it a convenient sound effect as well as visual appeal for aerial maneuvering. That’s not the only noise Tails’ Plane makes; pressing the “on” button and moving the plane around will activate its roaring engines as well as two blue flashing headlights making night combat a breeze. 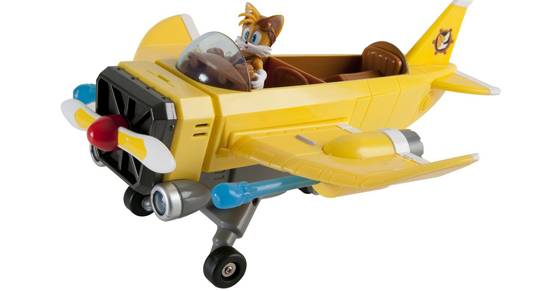 The plane is equipped with two spring-loaded projectiles that can be shot with precision and accurately hit its mark from quite the distance. Missiles can be launched up to three feet away by pressing a buttons on the engines of each wing. An ejector seat is also built into the passenger seat behind Tails to let other figures jump out when necessary. We had Sonic (detailed below) fit rather nicely in the backseat, however, characters larger than him like Knuckles or Eggman would have a tougher time getting comfy. Even the wheels of the plane are made for a smooth landing and come with a bit of traction to prevent it from rolling off a shelf if being displayed. The plane also comes with a little figure of Tails. While his signature twin tails are immovable, the rest of him is fun. His arms are on a ball-joint allowing them to rotate in a complete circular motion which is handy for all sorts of playtime. All around, Tails’ plane is a great toy to have if you’re one of the most dedicated Sonic Boom fans or even as a gift to give to a child for use with any other toy.

Next up is something smaller, the Blue Blur himself, Sonic. We received a little figure of him that came in a single package, no fancy airplanes or anything else. Sonic is also articulated at the shoulder and hip allowing for some range of motion but it’d be much better to include his knees to give off that speeding look. The packaging lists “articulated joints” which would leave many to believe every joint can be moved but it’s not the case. Given the toys small size it’s almost a miracle they decided to give him any range at all. 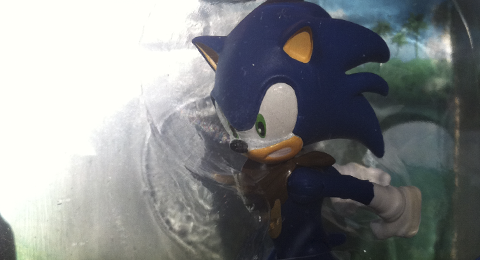 One glaring error on this Sonic toy is the lack of paint on his muzzle. The white used for his eyes bleeds right into the top of his muzzle making it look less than appealing. Perhaps it may have been too much work to paint the rest of his face tan but it really throws off his entire appearance. Even the picture of the toy on the back of the box shows everything in its right color. I would suggest to those looking for this particular figure to be as picky as possible if you’re looking to display him. I’m sure there are other Sonics with better coloring. This Sonic figure will go along nicely in any fans’ collection or in the hands of a kid just using their imagination. Its overall appearance is fair and its size makes it easily played with.

Those interested in purchasing a Tails’ Plane for themselves can head over to Amazon or Toys R Us.

Check out a video of the plane in action below: