I can’t stop taking outposts. I can’t stop skinning bears, starting forest fires, or strapping C4 to rhinos, baiting them to attack an enemy jeep and blowing everyone up like some kind of exploding battering ram. I can’t stop riding into enemy encampments on an elephant and shooting dudes with my bow and arrow while yelling Legolas quotes, or eradicating the local population of deadly honey badgers with nothing more than a grenade launcher, a helicopter and my wits.

And the worst part is that I knew it would happen. I got hopelessly addicted to Far Cry 3, and here I am again, fallen right off the wagon and onto an enemy soldier whose heart I’m stabbing. But just like its predecessor, Far Cry 4 ain’t perfect, and the more time I spend with it, the more I notice all the little (and big) things I wish could change about it. Let’s start with the little things first, shall we? 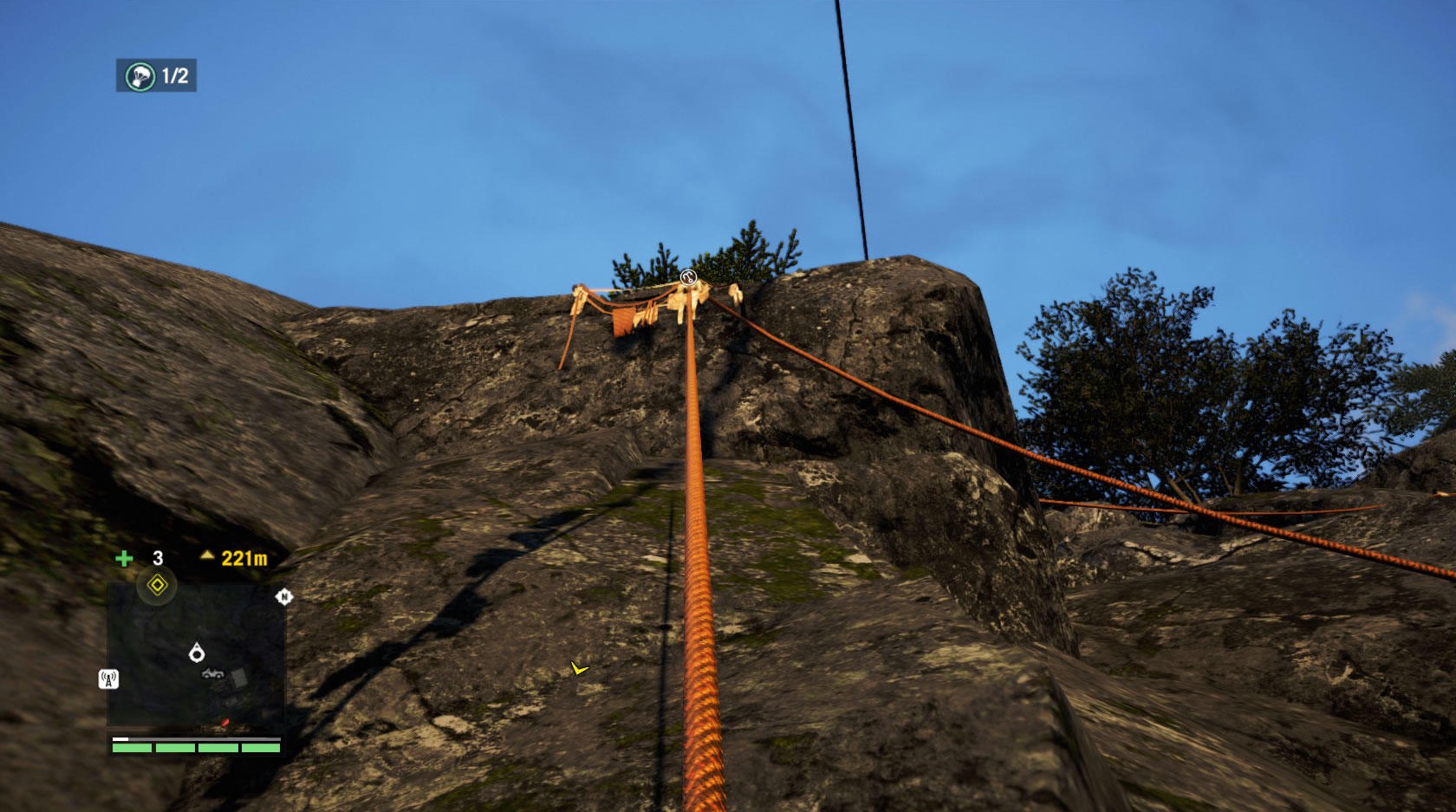 Maybe I should be more grateful since Far Cry 3 didn’t have a grappling hook at all, but the fact that you can only use it in very specific spots here never ceases to bug me, and it sticks out so much more after coming directly from Call of Duty: Advanced Warfare, which straight-up gives you a Batman: Arkham City-style grappling hook that can attach to almost anything. I don’t understand why Far Cry 4 doesn’t have that, or at least some good climbing pickaxes.

Far Cry 4 is game about verticality. You can soar down the sides of mountains with a wingsuit and infinite parachutes all day long, but getting back up? Well, you’re gonna need to take the long way around. 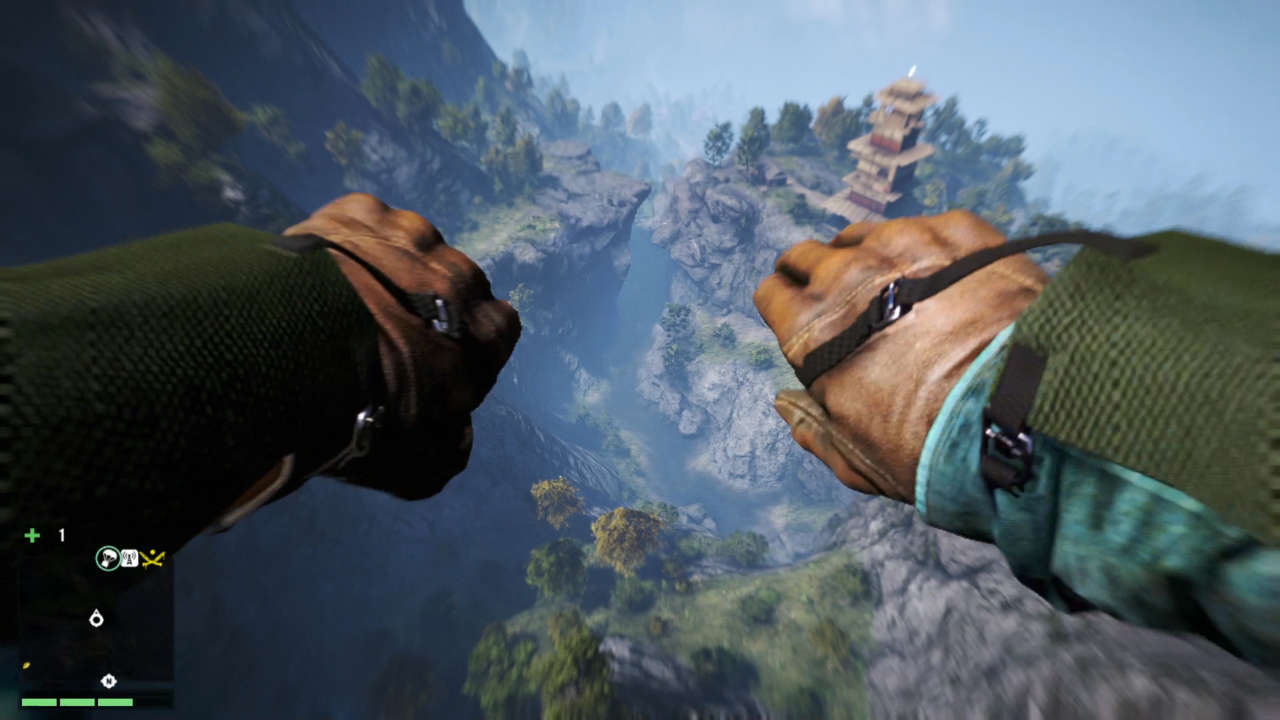 Let’s talk about that wingsuit for a minute, actually.

This is maybe the most minor of all my minor gripes, but I don’t think it deploys fast enough. There, I said it. We were all thinking it; I just said it. It was an issue in Far Cry 3 and it’s an issue in Far Cry 4, as well. Nothing kills my momentum faster in this game than causing a bunch of mayhem, sprinting toward a cliff’s edge, jumping off like a badass, then tapping the wingsuit button and dying instantly because the animation is consistently half a second longer than it should be. I made bowls of ramen in college faster than that wingsuit deploys. 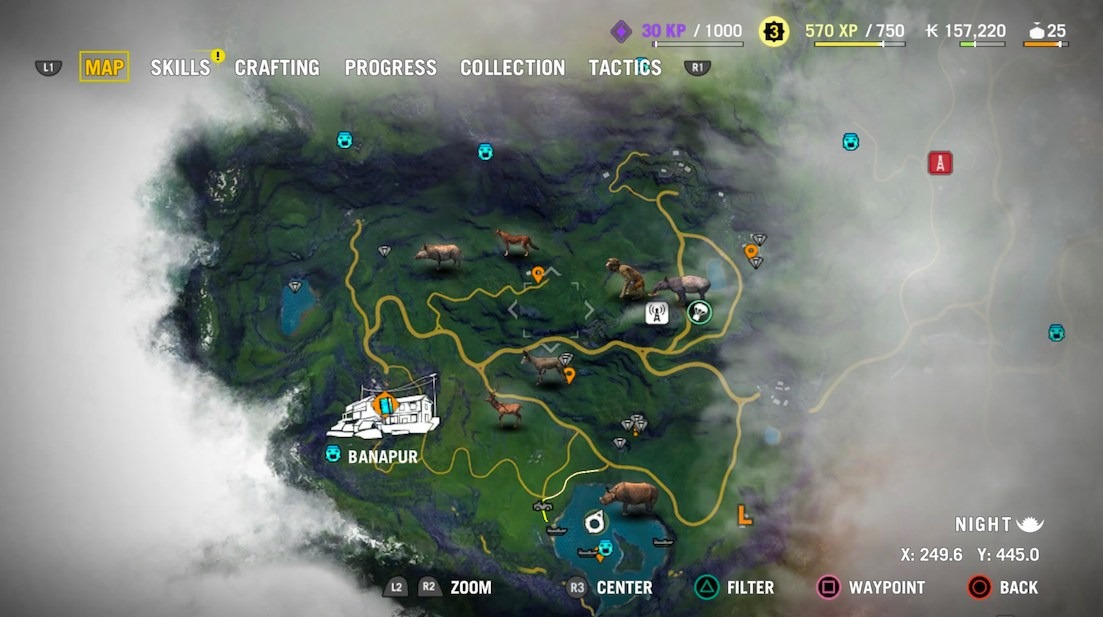 Okay, actually, this is probably my most minor gripe.

Listen, there’s a ton of stuff to do in Far Cry 4, and I really do appreciate that. At the same time though, I already did most of it in Far Cry 3, so I’m not quite as keen to collect all the little doodads and pick up everyone’s groceries or whatever this time around. But I’m still a dirty trophy hunter who needs to hear that chime to feel alive, so I’ve gotten in the habit of doing the requisite amount of side missions or collecting the minimum number of thingies to pop a trophy, then I’ll go to the map legend and turn off the icons for that type. I’ve really come to appreciate how much more manageable the experience becomes when you do that.

The problem is that the game doesn’t save your legend preferences. Every time I booted the game, I was greeted with hundreds of icons, all vying for my attention, so I have to turn each off individually. The same issue was present in Far Cry 3, and it’s no less annoying now. It’s a minor inconvenience, but an inconvenience nonetheless. 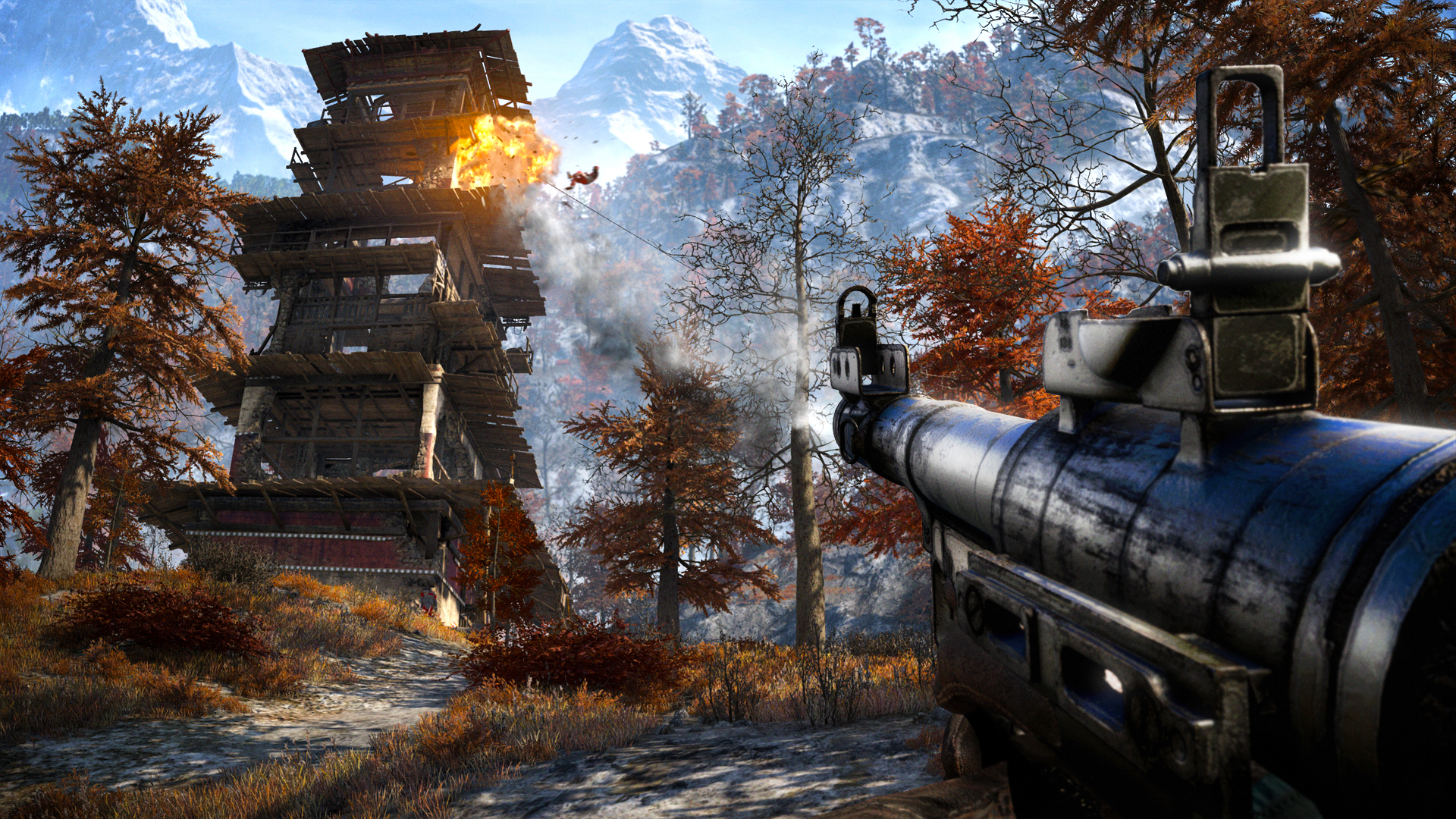 Before you think I’m about to complain about a lack of guns in a game overflowing with guns, let me just say: I am complaining about the opposite problem. There are too many awesome guns in Far Cry 4, and I wanted to carry more of them at once. You can only carry four weapons at a time. Four! That’s at least two guns too few.

You can’t take my recurve bow away from me; I won’t let you. Or maybe grenade launcher sidearm. Or my signature M133 shotgun, the “Bull.” Or my signature silenced M-700 sniper rifle, the “Predator.” Or my flamethrower. And don’t even think about coming near my flare gun. Sure, it’s “impractical” and “redundant” given that I’m already carrying a flamethrower. But I want it. Let me have it, Far Cry 4. 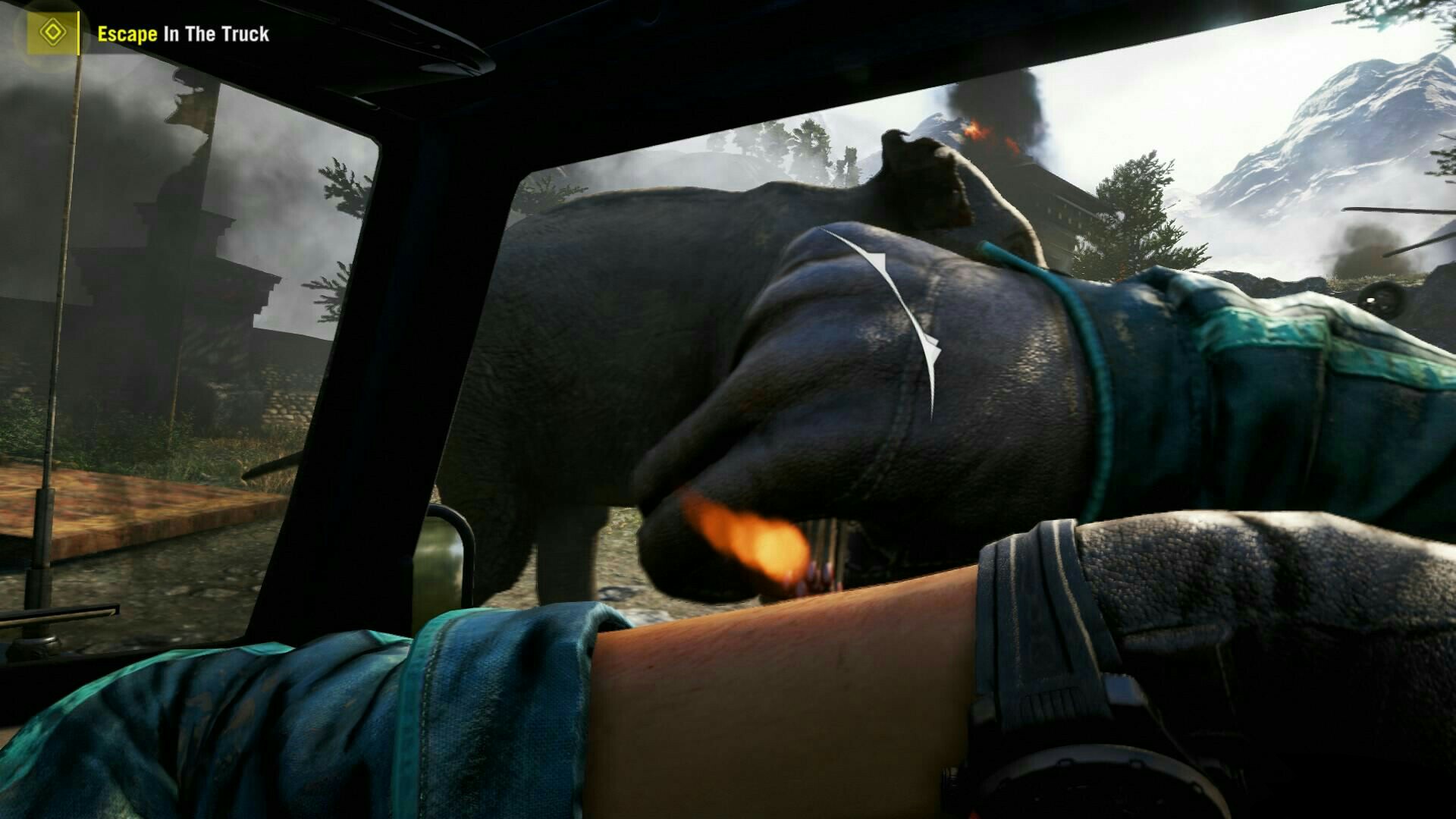 There are two ways to regain health in Far Cry 4. You can either stab yourself in the chest with a healing syringe or go through a longer animation where you’ll do something kinda crazy like cauterize a bullet wound with a bundle of matches. The problem is that you can’t choose which to do. If you have a healing syringe, you’ll always burn it, even if you’re not in combat and have all the time in the world to watch Ajay rip bullets out of his arm with a twig or rip a shard of glass out of his hand with his teeth and spit it out.

But in the heat of the moment, when there’s ten guys, two bears, and a deadly bird all attacking me at once, hey, now that’s a great time to pop a quick syringe. It’s just too bad I had to use it up earlier.

These are all just minor flaws though and don’t really hurt the enjoyment of the game all that much. Not all of Far Cry 4‘s problems are minor, however, and I’ll be covering its major issues next time.