Assault Android Cactus had a nicely-crowded booth on the PAX East show floor and, while there’s still a lot of work left to be done to graduate the game from Steam Early Access, there were a couple of big new features on display.  The big draw for the game was getting four players gathered around the screen and sending excessive amounts of firepower into the huge swarms of robots that crawled from the floor or dropped from the ceiling, but getting to play as a new character was a nice bonus for those already familiar wtih the game.  Shiitake (her profile looks a bit like a mushroom) has a slow-firing beam that punches through enemies plus a secondary attack that drops mines.  Like all the other playable characters she has a unique play-style that requires a new set of tactics to exploit properly.  It’s going to be a bit of a wait before she’s available, though, because like all characters beyond the starting set you need to beat a boss to unlock her, and the level 3 boss isn’t ready yet.  There was also mention of a mysterious new character coming after Shiitake, but her details got lost amidst the clamor of the show floor.

The other new addition to the game was a bonus mode that plays completely differently from Assault Android Cactus’ standard top-down twinstick shooter perspective.  FPS mode is the exact same game except, obviously, from an android-eye view.  It uses standard FPS controls and plays surprisingly well.  There’s not a lot of use for looking up/down, of course, because the main game’s overhead perspective enforces a need to keep enemies on (roughly) the same plane, but it still made for a fun extra.  It’s still uncertain when we’ll be able to play these new additions outside of a three-day weekend in Boston, but they should add some nice variety to a game that wasn’t exactly suffering from its lack. 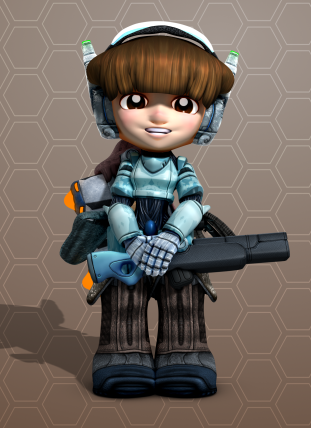