Alongside icons like Penny Arcade and Red VS Blue, The Angry Video Game Nerd has become one of the most recognizable figures in gaming culture. If you’re a gamer, it’s nearly guaranteed that you’ve browsed Youtube and seen at least a couple of videos from the series. Nearly a decade after the series’ humble inception, James Rolfe’s frequently sailor-mouthed alter-ego is still spreading influence. With each new gaming channel appearing on YouTube, there’s some level of inspiration coming straight from The Nerd. From the very beginning, The Angry Video Game Nerd was a giant leap forward. Whether James Rolfe knew it or not, the rise of The Nerd was a moment that changed gaming critique and entertainment forever.

AVGN mastermind James Rolfe began his journey through video game sewage in 2004 with a short video regarding his terrible experience with Castlevania II: Simon’s Quest on NES. Originally intended to be a personal “joke” project, Rolfe followed up with a video of the constantly maligned Dr. Jekyll and Mr. Hyde on NES. Rolfe’s friend Mike Matei (who eventually became a long-time production team member for Rolfe’s Cinemassacre crew) submitted Rolfe’s videos to YouTube in 2006, with Rolfe’s perpetually pissed-off moniker as The Angry Nintendo Nerd sticking. Rolfe continued his video series with reviews of NES games like Who Framed Roger Rabbit? and Top Gun, along with the infamous Power Glove, also bringing his friends Mike Matei (who played characters like The Cowardly Lion and Bugs Bunny) and Kyle Justin (who played “Guitar Guy” and composed the series’ iconic opening theme). Upon moving into non-Nintendo related products (and to avoid any legal trouble from Nintendo themselves), Rolfe became The Angry Video Game Nerd and teamed up with ScrewAttack.com to produce content for them. In 2012, eight years after donning the pocket protector, Rolfe moved back to YouTube exclusively. He is currently producing a full-length film about his iconic character that focuses around the landfill myth of the dreaded E.T. game on Atari 2600 (the game that is fabled to have caused the video game crash in the 1980’s). The Angry Video Game Nerd came full circle with the recently released Angry Video Game Nerd Adventures game, a side-scrolling platformer based around many of the things that The Nerd has ranted about in his show (The Nerd even got to officially review the game and complain about it in a recent episode).

It might be rather hyperbolic to say how much gaming culture has been influenced by Rolfe and The Nerd, but in all honesty, Rolfe changed how gaming criticism worked in the early years of YouTube. Before 2004, gaming critique was mostly reserved for the higher-ups at game magazines, or in rare cases, gaming websites. The online medium had yet to expand into the world of widespread game criticism; very few were daring enough to invest their time and effort into a video portal that, at the time, was in its infancy. The Nerd was really a breakthrough series in that regard not just for games, but for viral video content as a whole. It was a purely independent endeavor, right down to the simple cinematography and old-school, camcorder-based video editing. As a fan of cinema himself, Rolfe used much of his love of film in his own videos, integrating creative writing and a persona that was able to completely break free of the kind of restrictions you’d see on TV. The Nerd had no issue at all dropping a couple dozen F-bombs in his videos; it was something that you simply could not get away with on TV. Scatological humor and lots of middle fingers were fair game online. The Nerd didn’t just get away with them; he made them an integral part of his show. 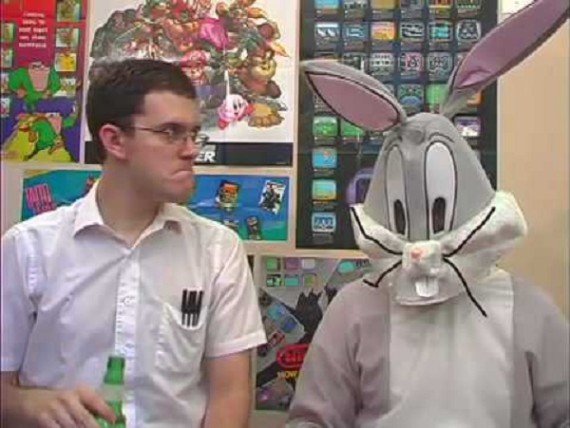 Nowadays, video game criticism is a cornerstone of online video. From JonTron to Angry Joe, everyone with a webcam and Fraps can now become a critic and don a characterized mentality, spouting profanities at will without getting censored. From the creative re-imaginings (Happy Video Game Nerd) to the straight-up ripoffs (Irate Gamer), YouTube is jam-packed with video game related content. Before this huge breakthrough, if you had to complain about a game, you were reserved to rant about it to your friends (who will only listen to you for so long). The Angry Video Game Nerd was a way for the most vocal of gamers to finally be able to say “Yeah! See? He gets it too!” And even without the crap jokes and constant cursing, Rolfe was still a critic. Looking at any of his videos (new or old), there is clearly a degree of legitimate and honest criticism. If there’s a problem with the controls in some obscure NES game, The Nerd made it known to the most precise degree. There was no sugar-coating anything with him; if it sucked, The Nerd made sure you knew it sucked.

The viral nature of The Angry Video Game Nerd was also a way for game criticism to take a significant turn. Before, with Nintendo Power, Electronic Gaming Monthly or Game Informer, it was mostly full-on writers and journalists doing the work. It was a professional environment. There were standards to uphold and no one dared to challenge them for fear of their professional image. By releasing the Angry Video Game Nerd series virally online, James Rolfe was able to loosen the medium up and add a much-needed dose of humor to it. The Angry Video Game Nerd was a game review series, but it was just as much an entertainment series. The Nerd was such a funny character, a caricature of ticked off gamers right down to the glasses, pocket protectors and button-up shirt. Rolfe clearly had a great grasp on “nerd”-related humor, which made his series a hit, but this method of challenging the stalwart professional journalists of the era was something unheard of. There was certainly gaming-related programming on TV (like TechTV’s X-Play), but its humor wasn’t the focus until long after Rolfe’s character was introduced online. Gaming was no longer some serious affair. It was something that could embrace crap jokes and mass swearing. Even better, it could be actually be funny along with being informative. 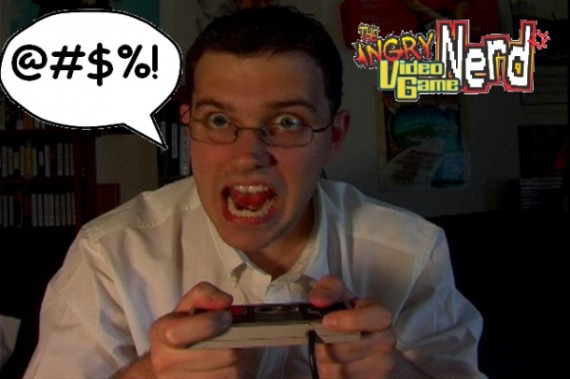 With such a stampede of gaming channels appearing on YouTube, so many trying to find one way or another to distinguish themselves from each other, it’s very easy to forget the genre’s roots. The idea of video game criticism in this post-90s, Web 2.0 world was offering the freedom of unrestricted creative and publishing standards, while also putting the power back into the hands of the gaming community. It was fresh ground to tread, and James Rolfe just kept going and going. The Angry Video Game Nerd series is still going, with the Cinemassacre channel being updated more frequently now than ever, currently netting over 1.3 million subscribers. Even as more and more fresh talent appears on YouTube’s gaming video pages, there’s always a place at the top of the mountain for The Angry Video Game Nerd. The Nerd’s debut was a transcendent moment for gaming criticism and viral video content alike; it simply changed the entire game.