The Perception Neuron is a very cool piece of tech – a tiny block no larger than a sugar cube that contains an accelerometer, a gyroscope and a magnetic tracker. On its own, it’s an impressive testament to the power of miniaturization, but when synced with up to 31 other Neurons, it allows for remarkably accurate full-body motion tracking. The device is being billed as an ideal companion to the Oculus Rift, but while I’m not entirely convinced that it will work in the consumer marketplace, I do see it having a very positive effect on the indie development scene.

Anyone who’s dabbled in it before can tell you that animation is complicated and expensive – either in terms of time or money, depending on the size of your project. Bigger studios can shrink their workload by using motion capture instead of doing everything by hand, but for smaller devs that’s never really been an option. The up-front costs of motion capture – the software, the cameras, and the space to put it all in – are prohibitively expensive, and renting a space, if the option is available at all, comes with its own restrictions. With the Neuron, a small developer or student team can have their own capture gear for between 800 and 1500 dollars, without needing a dedicated space to put it in.

That price point puts it out of range for all but the most affluent consumers, but frankly even if the Neuron were more affordable, it’s a little too cumbersome for practical home use. 3DTVs struggled against consumers too apathetic to even put on glasses for viewing, so I find it hard to imagine that gamers will be willing to fiddle with 16 separate Velcro straps every time they want to play. Even the standalone gloves, sold for just a hundred dollars apiece, feel considerably less convenient than more self-contained competitors like the Razer Hydra and Sixense STEM. 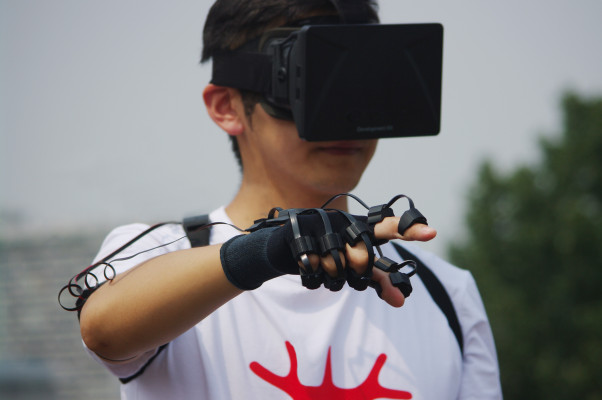 Don’t get me wrong, there is something undeniably cool about looking at your hand with an Oculus rift and seeing a CG duplicate mirroring your movements exactly. Thing is, more traditional motion controllers come close enough in most use cases, and they offer the additional benefit of tactile feedback. They also tend to work right out of the box, whereas using the Neuron requires a lengthy, fiddly calibration process. Sixense’s tech may not be quite as versatile or affordable as the Neuron, but it’s substantially more convenient and accessible, and in the tech market convenience defeats every other advantage – price included.

In the professional world, though, the opposite is often true (just look at how many people are willing to subject themselves to GIMP instead of paying for Photoshop), and it’s there that the Perception Neuron has a chance to really shine. Fiddling with straps and settings is a pain, sure, but it has nothing on bringing a character to life from scratch, and shifting the bulk of that workload to an actor is more than worth a little initial hassle. The Neuron will empower many indie developers to create games like they’ve never made before, enhanced by greater realism and more fluid motion. I may not be sold on the device as a peripheral, but I’m more than convinced of its power as a tool.