Game developer Kilobite made the wrong kind of news this week with its Kickstarter for Knuckle Club. While there’s nothing inherently wrong with the game itself, which is a semi-scifi side-scrolling brawler in the Streets of Rage style with light RPG aspects, the crew behind Knuckle Club was already on the hook for Confederate Express.

Confederate Express is a strategy game that blew past its initial Kickstarter funding goal by almost 400%. A few weeks after completion the developer announced they’d be helping out on a second project, which would mean delays for their game but the payoff would realize all the stretch goals they’d been wanting to implement. A bit of a wait for a better game? The reaction was overall positive, and it’s not like anyone expects a Kickstarter game to deliver on time anyway. The investment announcement was in December, there was another update in February showing off a number of nice graphical goodies, and then… dead silence. Four and a half months later Confederate Express finally gets an update with the announcement of the “sister project”, Knuckle Club, and its Kickstarter campaign. The reaction is significantly less positive than back in December, to put it lightly.

Short version- Kilobyte runs a Kickstarter for Confederate Express, gets additional funding by agreeing to help a second developer on their game, then announces that the second game is now their responsibility and heads back to the Kickstarter well before delivering on the first project. Knuckle Club has been up for several days, received pledges of $304 out of its $25,000 goal at the time of this writing, the comments section is toxic, and the Steam Greenlight page isn’t much better. This is the wrong way to delay delivering on a campaign.

Energy Hook just went through a similar experience recently. In January Happion Laboratories developer Jamie Fristrom announced a chance to put Sixty Second Shooter on the Xbox One, making it one of the only twin-stick arcade shooters on the system. He explained it would mean no work on Energy Hook for a few months, and while the opportunity was too good to say no to, he wasn’t going to do it without backer approval. A survey was set up, votes tallied, and in the end over 80% of backers were good with the delay. Those who were unhappy with the wait could request a refund, backers were offered Sixty Second Shooter Prime keys, and all backers got access to the current build of Energy Hook in March. Sixty Second Shooter Prime released on Xbox One on June 19th, and development is back underway on Energy Hook. This is the proper way to delay delivering on a campaign. 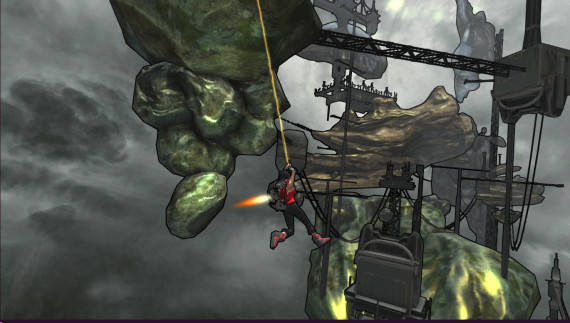 If there’s one real problem with Confederate Express it’s the near complete lack of communication. The presumption was made that the backers would deal with a situation that still hasn’t been properly explained. The Confederate Express/Knuckle Club crossover looks sketchy as hell, and the developer hasn’t made any attempt to clear up the details. Is Knuckle Club a game they were contracted to do, or is it actually a Kilobite project as the Kickstarter campaign indicates? What happened to the mysterious investor? How did the initial time-sink for Knuckle Club, estimated to be three months, expand to eleven months? Who on earth thought going back to Kickstarter with a highly-successful campaign left incomplete was a good idea? As shady as all this looks, is there any evidence to back up the answers to these questions? All this should have been explained to Confederate Express’s backers before the Knuckle Club campaign went live, and then maybe Kilobyte wouldn’t be struggling to clear the $300 mark on their next game.

As for Energy Hook, its backers have an early version of the game and Sixty Second Shooter Prime if they’ve got an Xbox One. If Happion Laboratories needs to do a future Kickstarter campaign for whatever the next project may be, the odds of it being successful seem pretty good.  It’s amazing how a little bit of communication can keep people happy.