Hawkeye is quick on his feet and sneaky, attacking enemies when they’re down. The lucky fighter is a tad mysterious, but has his heart in the right place and always aims to do the right thing and help others in need. He wants nothing more than to see the ones he loves safe and keep his home from going down the wrong path. 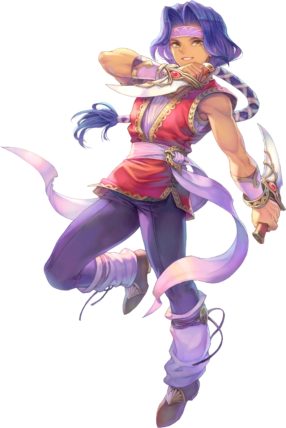 Hawkeye is the most unique character of the playable roster as he relies a lot on luck and critical hits. He can either help on the front line or help dwindle enemy health from the back depending on the path he takes. The Light path allows for him to either help keep allies at their top shape or set traps for enemies lying in wait. The Dark path makes him a little more ferocious, with more strong magic attack options and the ability to cripple enemies who come his way from the shadows. His brute strength is moderate so it’s best to pair him with another heavy attacker unless he’s receiving buffs himself, but he can hold his own with quick attacks that give out high critical damage and can potentially 1-hit KO smaller enemies without even thinking about it.

While he can be a decent front attacker, Hawkeye is best at going in for attacks and then retreating to use spells or traps.