As the intro mentions, a lot of times we get far too sucked into the games we’re playing. Our competitive natures get the best of us and we become pissed at a boss in Persona 5 or the fact that we’re losing elo in Overwatch. When you get that way, put the joystick down, pick up your phone and download Retro Shooter for free from the app store.

Retro Shooter is an arcade top down shooter by Livezen Corp that does an amazing job of giving you a nostalgic Galagaesque feeling. From its graphics to the gameplay Retro Shooting lives up to its name and delivers a great experience. 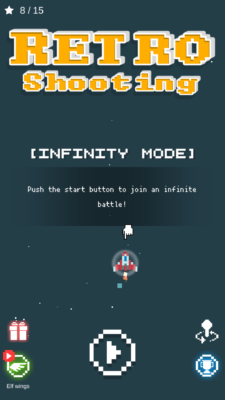 From a gameplay perspective, Retro Shooting is solid. Stages are filled with enough bullets to keep you moving and enemies don’t require too much attention to defeat. After a few enemies, you’ll receive a medal that acts as a power-up and gives your ship the ability to shoot missiles and more bullets, the basic function of powerups in these games. Along with the extra bullets and missiles, you have three special abilities at your disposal: a bomb, laser and shield.

At the end of most levels will face a boss and before you take them on you’ll be presented with a name and its offense and defensive stats. For the most part, you’ll mow through the early bosses as you’ll collect power-ups that keep your damage high. Obviously, the further you get the more difficult they become and basic enemies start to join the fray to up the bullet count and increase your spastic movement. 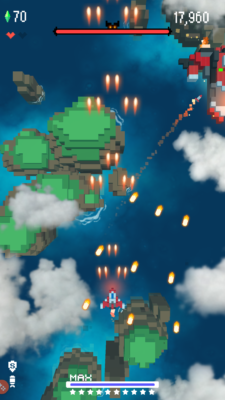 When it comes to controlling your ship, Retro Shooting is good in that department as well. To limit frustration, your ship will always be shooting so all you need to worry about is positioning and whether or not you want to use a special ability. To move around you simply slide your finger across the screen and for the most part things go smoothly in this area. The only time you may have an issue moving is if you reposition your finger, as regardless of its placement, you’ll move or when your finger is right on top of your ship limiting your view of your hitbox. If you have big fingers you’ll have to be a little creative to not be annoyed from time to time, but things generally go along smoothly.

Everything is graphically simple. The game has a pixelated style that’s easily done and represents it well. Retro Shooting gets a nod for this for not trying to go overt the top with unnecessary and funky 3D. Your screen will never lag because its trying to render what’s happening on the screen.There’s nice and fluid bullet-filled action to be had on the screen and it’s not mucked up with the other nonsense. 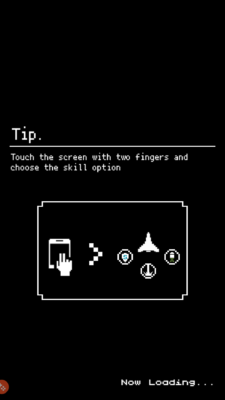 Retro Shooting is a great game to just get away from all the usual gaming we do. It doesn’t take itself too serious and you can just sit back and shoot ships all day. Literally, there’s an infinite game mode and that’s all you have to do is shoot. Those interested can download Retro Shooting here for iOS and here for Android