The app market is full of a lot of the same games. For the most part we’ve always ran across endless runners, puzzles and shooters, but this time we’ve ran into something new: a roguelike. Yeah, yeah we know it’s not the only one that’s there, but it’s one of the better games we’ve played. This month we’re casting a spotlight on Soul Knight by Zeyang Li/Chillyroom.

Technically Soul Knight has a story though it doesn’t mean much. It’s so irrelevant they don’t even care about it in the game’s synopsis. Here’s how it goes: “in a time of gun and sword, the magical stone that maintains the balance of the world is stolen by high-tech aliens. The world is hanging on a thin thread. It all depends on you retrieving the magical stone… We honestly can’t keep making it all up. Let’s just shoot some alien minions!” The intro you gives you a little spiel about what’s going on and then you’re in the tutorial. 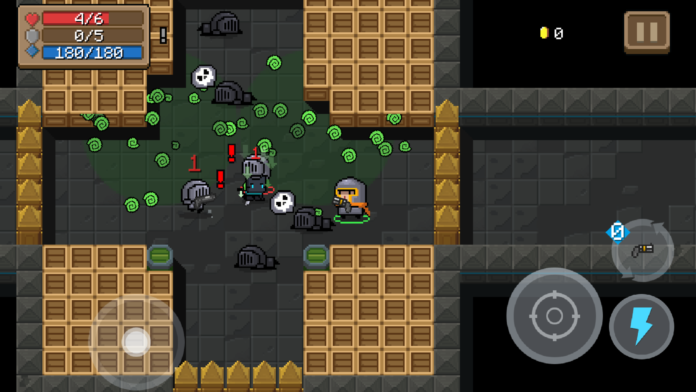 Like we said before Soul Knight is a roguelike. More specifically a top-down roguelike where you go through dungeons per usual. Dungeons generally span about four to six rooms and you’ll probably face two to three hordes of enemies per room. You’ll have to dodge, duck, dip, dive and dodge alongside boxes, making the fights a little more difficult. As you can imagine the further you get the harder things become. Like every roguelike you shouldn’t ever experience the same setup from playthrough to playthrough keeping it fresh.

Mechanically Soul Knight has a pretty simple setup. Essentially anywhere on the left side of the screen is your movement “stick.” While it’s default located in the corner if you randomly place your thumb on that side it’ll know that you want to use that move. On the right side is your firing button and it doesn’t move around. It’s statically located next to two other buttons that control your weapon choice and power up. The best part about this and something you may not notice when you first start is that you don’t have to aim. Simply pressing the button will cause your character to fire in the direction of presumably the closest enemy. This makes focusing on dodging enemy shots easier as you won’t have to try and aim as well on your tiny device. 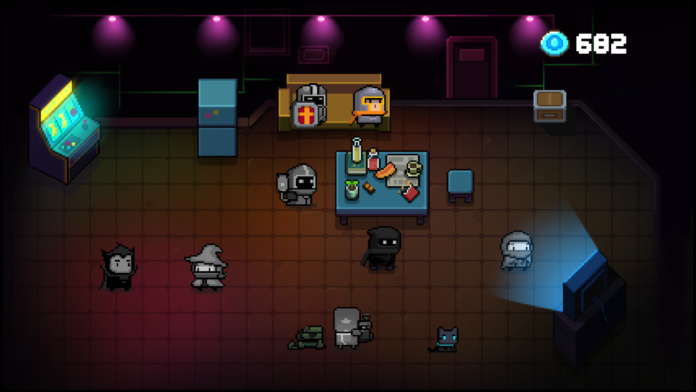 Keeping your interest are the host of other characters you can unlock in the home room with you. The different classes are rogue, assassin, paladin, engineer, wizard, alchemist and vampire. Soul Knight is technically free to play, but you can buy some characters for $1. Other characters you can unlock by collecting gems as you play or buy straight up buying gems. If it’s worth it to you you can buy 5000 gems for $1 and that’s enough to unlock any one character in the game. All of their stats and supers vary and you can upgrade each character with gems as you play.

For a mobile game, Soul Knight has some good depth to it and if you’re a fan of roguelikes it transfers well to the mobile platform. If you’re looking for something different for you phone, Soul Knight is worth your time. It’s legitimately one of the best games on the market right now. If you’re interested you can download it here on Android and here on iOS.