If you’re a fan on strategy RPGs and you don’t mind playing on mobile, you might want to check out Star Wars: Galaxy of Heroes. This game, brought to you buy EA’s mobile team Capital Games, brings all of your favorite Star Wars characters together for you to control and level up as you see fit.

If you’re a Star Wars fan and you haven’t checked this out, it’s actually a fun game. In Star Wars: Galaxy of Heroes you collect practically every member of the Star Wars universe (even the new members are collectible). Once you get these characters you use them in a turn-based battle system to take out the opposition, which can either be other players or just the computer. Here’s the sad part: in order to play as all the iconic characters you’re thinking about and looking forward to, you’re going to have to grind a lot for shards. That, or you can pay to have those characters and bypass the whole grinding/fun part. 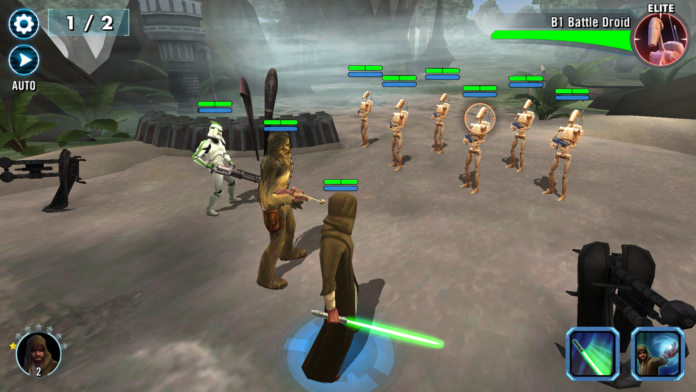 Once you unlock a character they become part of your team that you can change whenever you want. After unlocking these characters you gain experience on them by using them in the battles that you can play in. These battles are split into Light and Dark side fights that happen in a series across iconic Star Wars planets and ships that you’re sure to recognize. After leveling them up you can apply upgrades to the character once you unlock the slots for them. There’s a lot more to it, but that’s pretty much the basics.

Combat is turn-based and works as you’d expect. Players health are represented by a green bar and right below it is a blue bar representing when the character will be ready to attack again. Characters have four abilities that you unlock as you level them up. You have one basic, two specials and lastly one leader ability at your disposal. 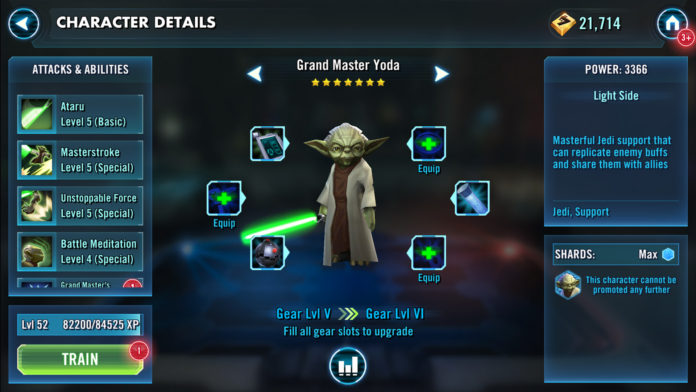 Another thing you’ll undoubtedly notice is the music of the game is the same as that in the movies. Hearing the Star Wars soundtrack never gets old and here it’ll accompany you throughout the countless battles you’ll be playing to earn your favorite Light and Dark side heroes.

There’s a lot to Star Wars: Galaxy of Heroes, but here’s the short part. If you enjoy mobile RPGs, Star Wars and/or grinding for gear, you might as well do yourself a favor and check it out. You don’t have to pay anything and it’s the Star Wars universe, what’s not to love?

If you’re interested you can find Star Wars: Galaxy of Heroes here for Android and here for iOS.