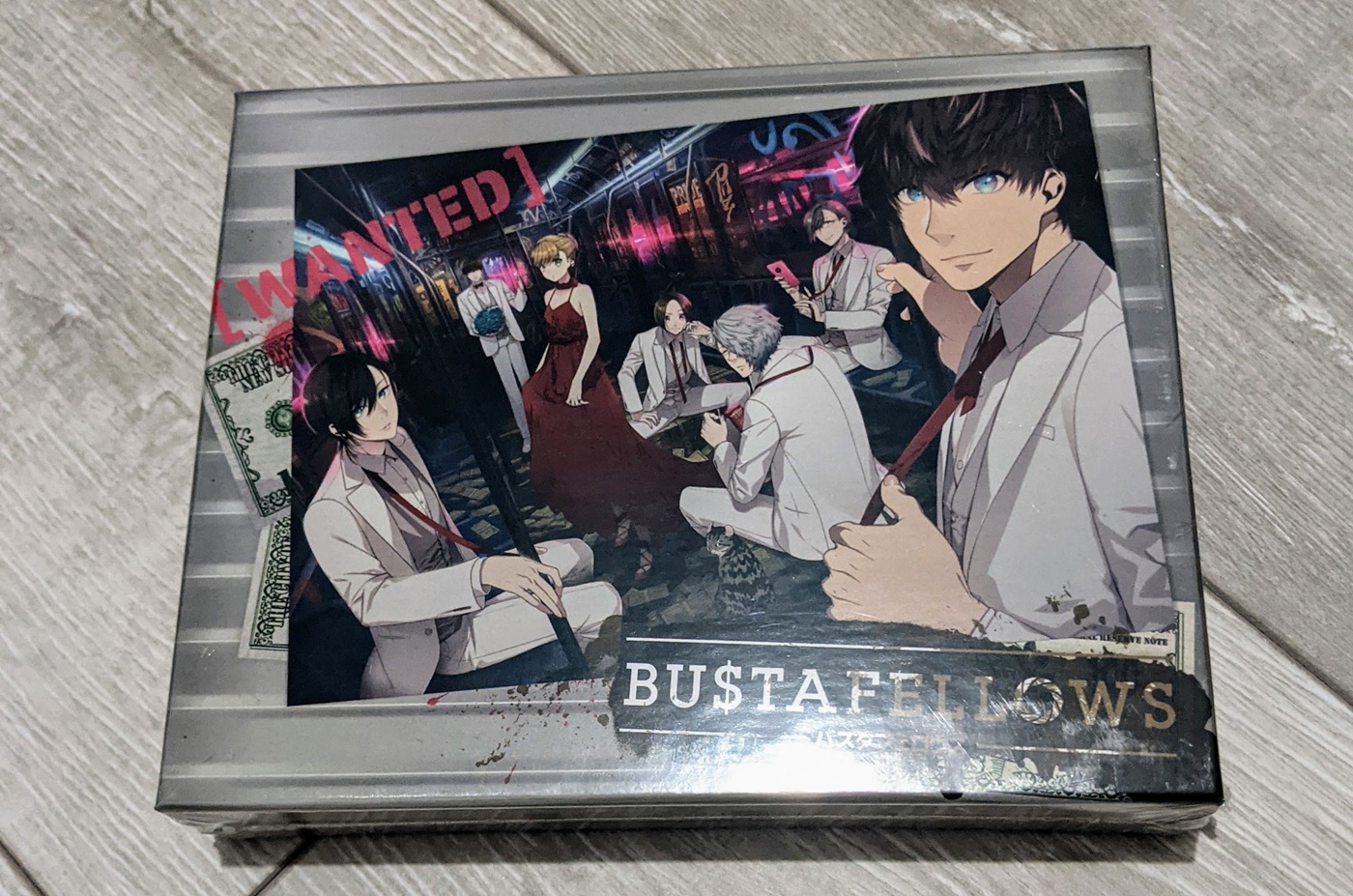 Bustafellows may be the first otome visual novel release from PQube, but it’s a great, beloved entry in the genre. The publisher deserves extra credit for having released the Bustafellows Collector’s Edition, which has many of the same items that Japan received — a huge rarity. Typically American otome game releases can’t hold a candle to their original editions. Sure, there were no retailer-exclusive bonus goodies, but the base package is a lot of fun regardless. 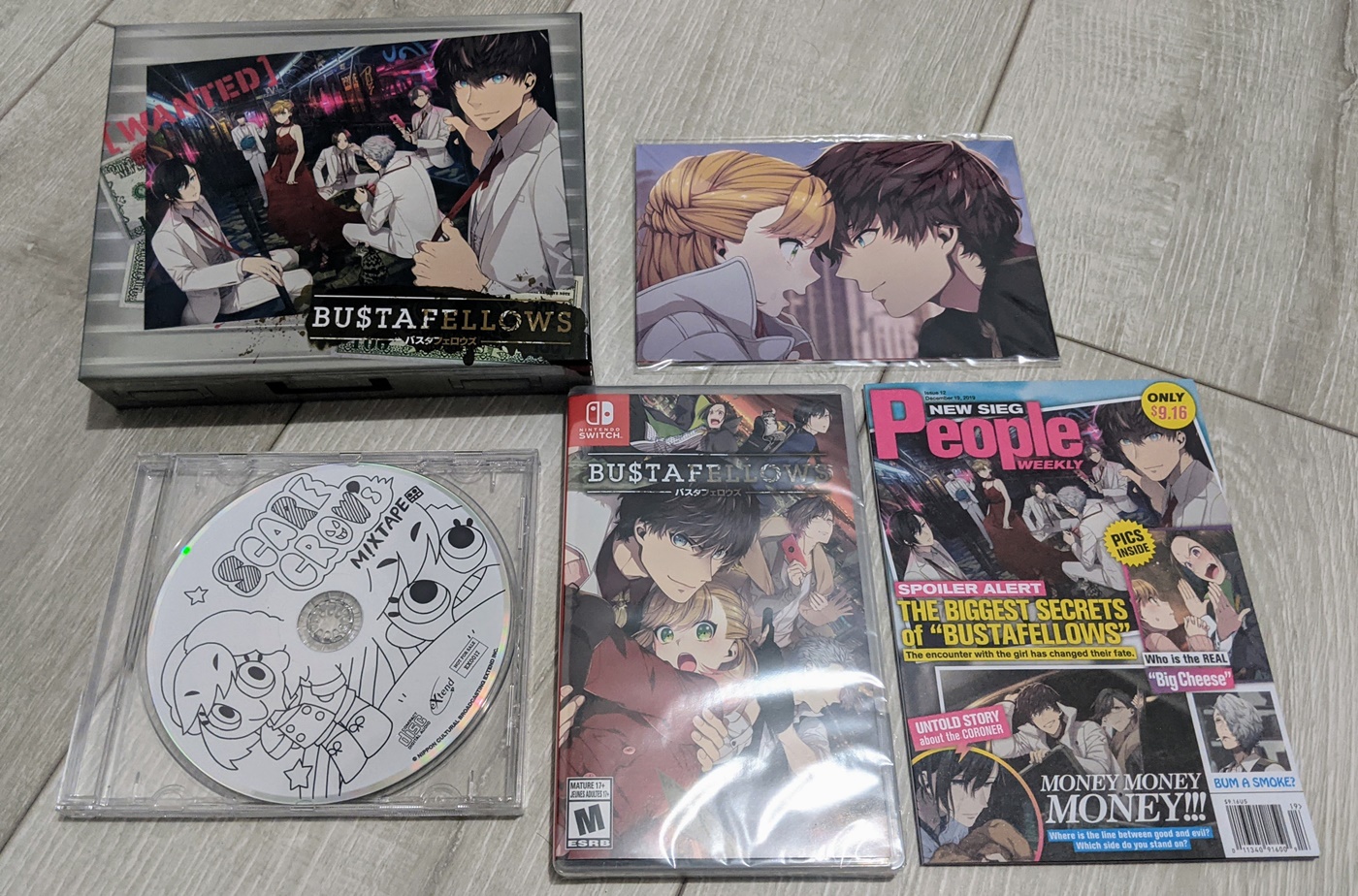 The Bustafellows Collector’s Edition includes a physical copy of the game, six art cards, soundtrack CD and an art book styled like a magazine. Unlike most limited editions, not everything fits within the exterior cardboard box. The copy of the game itself is included as a separate item. The rest of the goodies fit inside the box, though. The outer box features a cute design that makes it look like a metal briefcase packed to the brim with cash.

First up is the soundtrack CD. It comes in a clear jewel case with no cover insert or track listing. It features black and white art and says “Scarecrow’s Mixtape” on the front. This is in fact a copy of the mixtape Scarecrow provides to the protagonist in the game. As such, it makes sense thematically that the disc comes in a clear jewel case. There are 27 tracks included in total, including the theme song “Novalis.” The drama CD from the Japanese deluxe edition isn’t included, since it would be all Japanese audio. 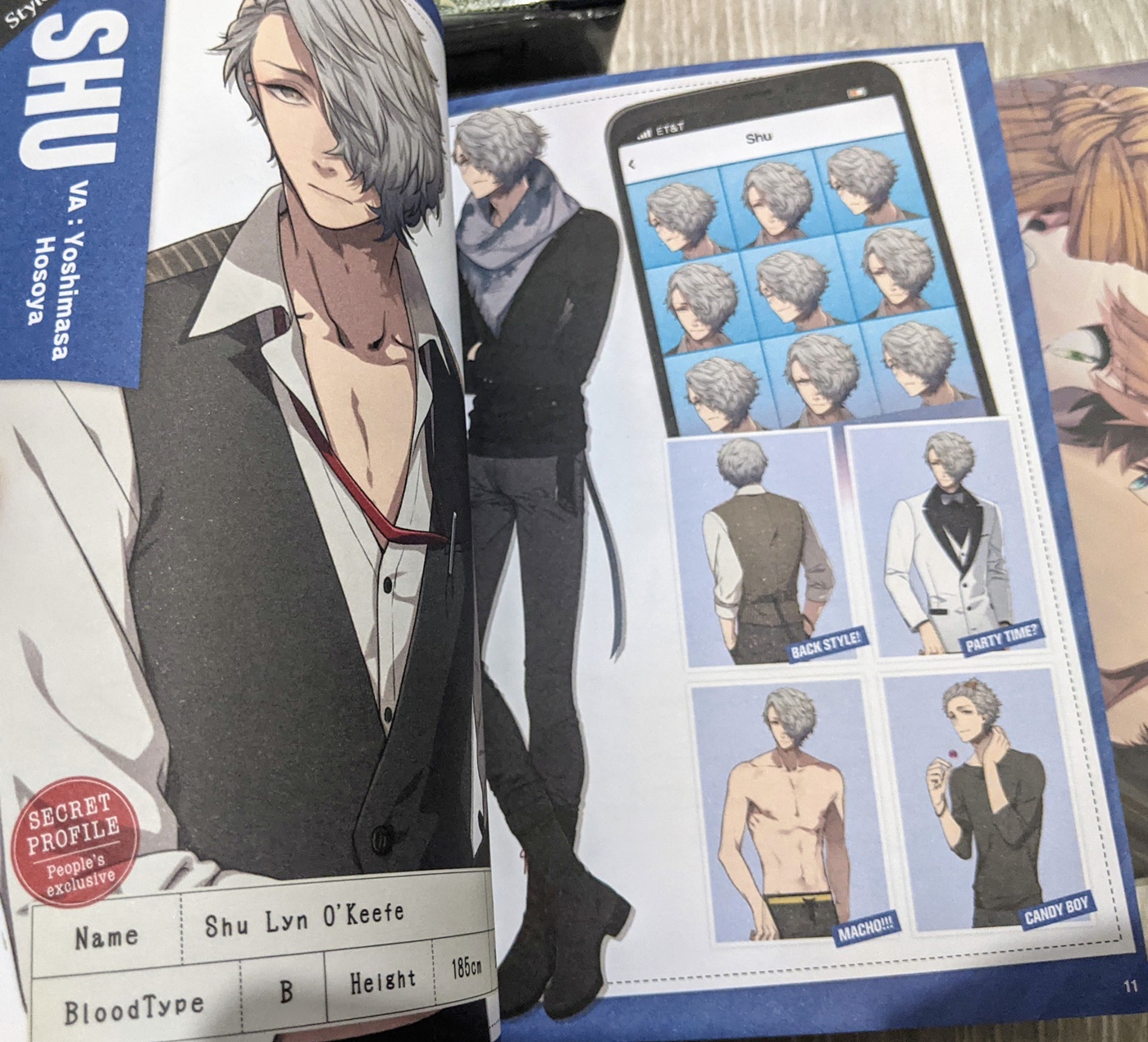 The most enjoyably unique of the included items is the art book. Sure, an art book is nothing new, but the design of Bustafellows’ art book is a real treat. It’s designed to look like a magazine — New Sieg People Weekly to be exact. Expect to see a handful of “ads” themed in the world alongside game art. There are character sketches, sprites and CGs included on the color pages. Note that, as with most art books, some of the images include spoilers from later in the game. So don’t open this up unless you’ve beaten it already.

Finally included in the box are six art cards which have a matte finish and are all in color. They’re about the size of a standard postcard and printed on sturdy cardboard. Each card features a CG from Bustafellows. Each card of course focuses on one of the eligible bachelors in the game with our protagonist as well as one group photo. Interestingly, these cards were not included in the Japanese deluxe edition, so the character cards are an extra bonus for English-speaking fans.

If all these items aren’t enough, previously Japanese-exclusive merchandise is also available for purchase globally. This is interesting, as otome games often have tons of merchandise that fans outside of Japan need to purchase through eBay. The A&G Shop offers pin badges, keychains, bag and acrylic stands among other items.

Bustafellows fans were treated to a great release from PQube. The only disappointment is that now they’ve officially sold out from PQube. There were three editions – Switch US, Switch EU and Steam (for all regions). All have since sold out. Of course folks who need to pick up a copy will be able to do so from secondhand markets. Let’s look forward to more exciting limited edition otome releases coming from PQube in the near future!