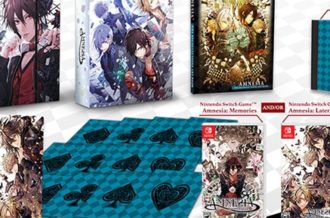 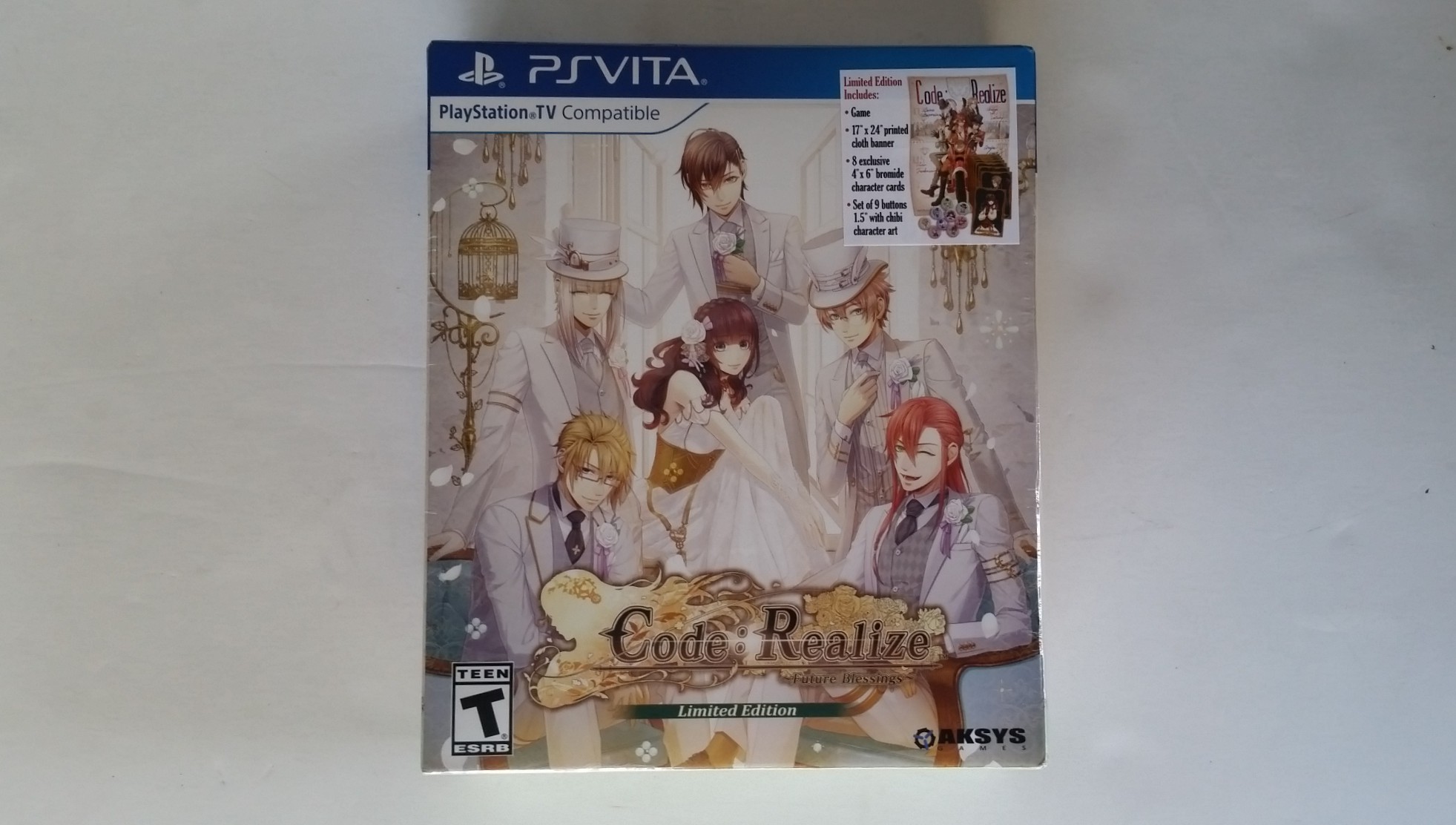 Code: Realize ~Guardian of Rebirth~ graced English-speaking otome fans in 2015. Not soon afterward, Aksys Games gave word that they would be bringing over the next title, Code: Realize ~Future Blessings~ to PS Vita. Alternately, folks who wanted to play on PS4 would be able to get both games on the platform under the single release of Code: Realize ~Bouquet of Rainbows~. Both games have since come out – and each with special editions packages. The two editions are nearly identical, except for one tiny difference. The Vita version includes a sleeve to hold both Code: Realize ~Guardian of Rebirth~ and Code: Realize ~Future Blessings~. Aside from that, and the obvious difference of platform for the game included inside, they’re the same edition. So let’s crack open the Vita version and take a look!

The outer box housing all the Code: Realize ~Future Blessings~ Limited Edition elements is quite cute. It features artwork of our protagonist surrounded by handsome men all in white. Once the box is opened, it’s revealed to have a lot of different little compartments. This was done in order to minimize the different items inside damaging each other or moving around much at all. It’s a tight fit inside the box with all that’s included. Aside from a copy of the game itself there are nine buttons, eight character cards and a cloth banner. As stated earlier, the Vita version also includes a two-game sized cardboard sleeve decorated with Code: Realize series artwork. 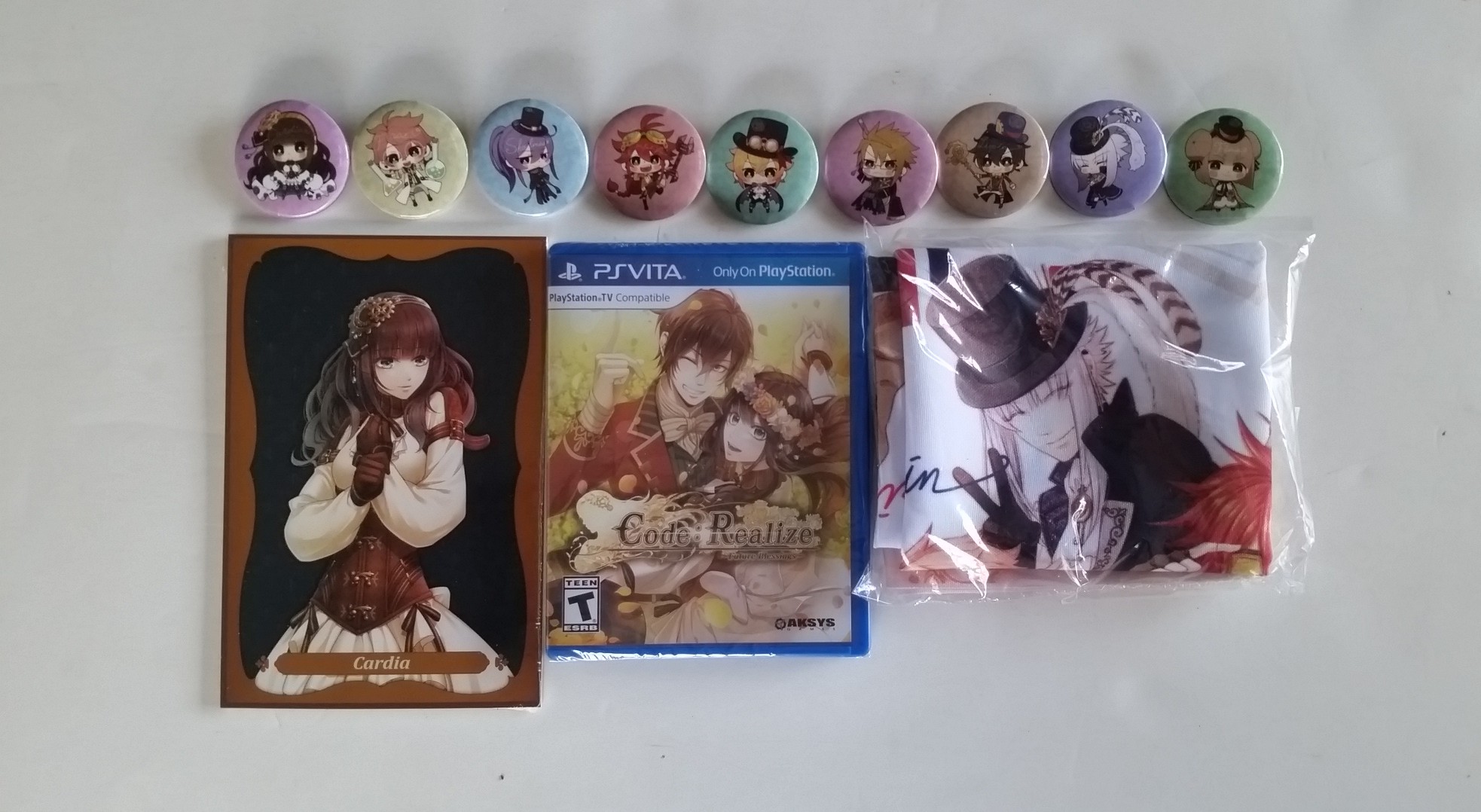 If there’s one item that is the least interesting from the set, it’s probably the cards themselves. To be fair, they’re well made. The eight bromide character cards are each 4” x 6” and printed on stiff paper. One side features a character portrait while the other side provides a bio on the specific character. For reference, “bromide” cards in particular just means that they’re larger than your traditional baseball cards and feature glossy, high-quality printed artwork. While these are neat collectibles, there’s not much one can do with a set of character cards. Then again, special edition contents often tend to be relatively useless.

Next up are the nine buttons. Each pin is 1.5” and showcases adorable chibi artwork. The buttons themselves are of good quality and don’t look like the sort of homemade pins you’d find at conventions, but they’re not the most high quality versions either. Pins are always fun because they can be adorned on lanyards or decorate an otome fans’ itabag (a bag showing off their favorite character merchandise). The pins come in their own cardboard case within the main box which is useful since you don’t want buttons banging around inside a special edition. 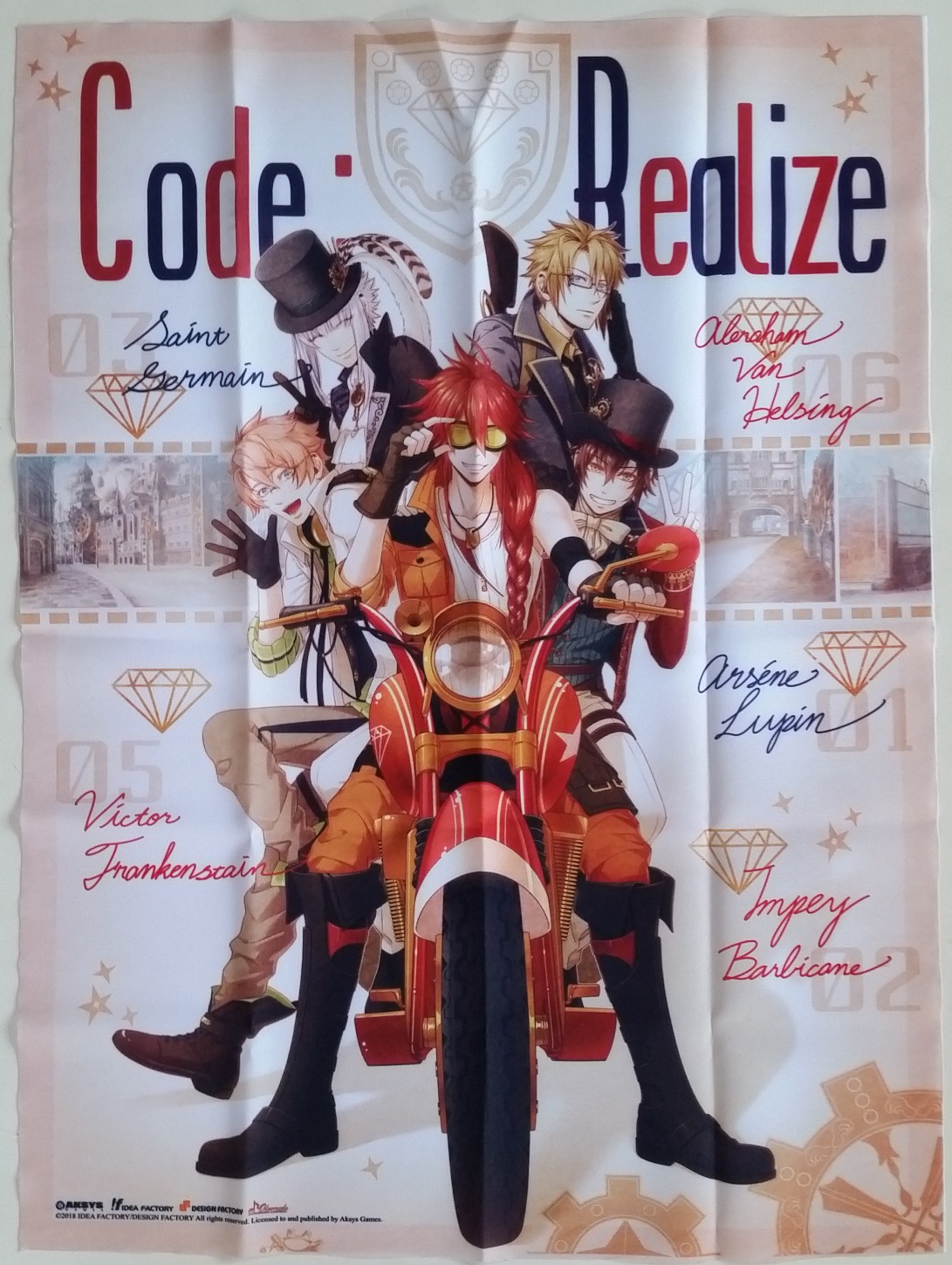 Finally there’s the printed cloth banner. Now this isn’t the biggest banner we’ve seen with an otome game; it’s only 17” x 24” which makes it a bit smaller than an average sized poster. Still, the banner features some fantastic artwork with the main men posed happily on a motorcycle. The quality of the banner seems high and makes this a piece worth hanging up if you love the Code: Realize world.

The Code: Realize ~Future Blessings~ (and by extension, ~Bouquet of Rainbows~) Limited Edition is a lovely gift to otome fans. It features a variety of character-focused merchandise which is all of relatively high quality. It would have been nice to see a few more additions such as an artbook or a soundtrack CD, but the edition does not suffer much without these types of standard goodies. Here’s hoping all the fans who wanted it were able to pick up either the Vita version or PS4 limited edition, as they have since sold out at all major storefronts.